TPG Reader Hall of Fame: This couple redeemed 720k points for a pre-pandemic vacation to the Maldives 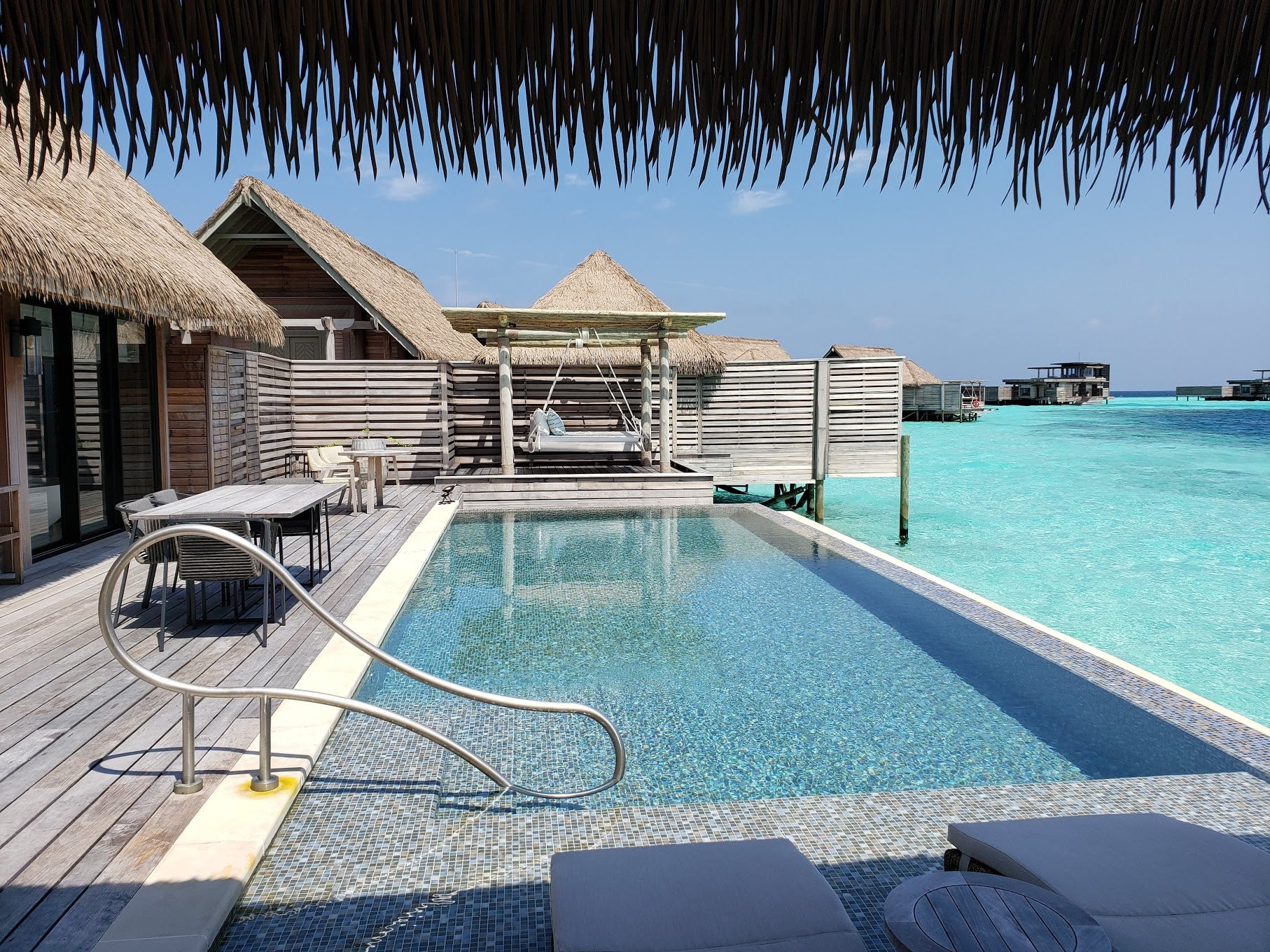 If you knew your final trip before the coronavirus shutdown would be your last for a long time, would you have gone all out?

The majority of the world couldn't have predicted how the novel coronavirus would forever change our lives and the way we travel. For some of us, our last trips were long-weekend getaways or visits to the local beach. For TPG reader Josh, a financial advisor who got his first American Express card in 1998, his last trip was one of a lifetime -- to the Maldives and Singapore in February and early March.

"We have traveled all over the place, including an epic 12-day trip for our 10th wedding anniversary to Hawaii in 2018 using only points and miles, flying Delta One (old seats), and staying at places like the Ritz-Carlton Kapalua in Maui," Josh said.

After that trip, Josh and his wife, who are based in Hartford, Connecticut, wanted to experience a "once-in-a-lifetime trip" to an exotic destination for their 40th birthdays. After extensive research — by reading The Points Guy, of course — the pair settled on Singapore and the Maldives. Here at TPG, we're fans of both destinations, and TPG's Brian Kelly has visited the Southeast Asia archipelago several times. Good choice, Josh.

Related: How to have a splurge-worthy Maldives honeymoon on a budget

'Do you want Dom Perignon or Krug?'

Over the years, Josh says he has amassed over 1.8 million points from a combination of work travel and spending. He says he got hooked on points and miles after redeeming points for a round-trip Swiss Air flight in 2010. Since then, he says he has "no desire to ever sit in the back of the plane" again.

Related: A double bed in the superjumbo: Singapore Airlines (A380) in Suites from NYC to Frankfurt

It's only fitting, then, that the trip started in the front of the plane. But this wasn't just any first-class flight -- it was Singapore Airlines Suites, which would stop in Frankfurt (FRA) before continuing to Singapore (SIN). He redeemed 264,000 Singapore KrisFlyer miles for both tickets, which he transferred from American Express Membership Rewards and Chase Ultimate Rewards.

Josh and his wife started the nearly two-day-long journey at New York's John F. Kennedy International Airport. After check-in, the pair killed time at the Virgin Atlantic Clubhouse, which Singapore First guests can access for free. After relaxing at the lounge with dinner and a couple of glasses of champagne, it was time to catch the flight.

Josh says he was immediately impressed by the product and service. "Probably the best [service] we've ever had anywhere in the world," he says.

Though he doesn't consider himself a champagne drinker, it is first class, so bubbly is part of the experience.

"We got on the plane," he says, "and they [asked] do you want Dom Perignon, or do you want Krug? And we both looked at each other and said, 'how about both?'"

He estimates that only seven out of the 12 Suites were occupied with passengers, making the experience feel like the pair had their own flight attendant. The couple booked Suites together to make a double bed. He says he appreciated the comfy pajamas, superb service and food. He says the captain and crew gave the couple a special note thanking them for flying Singapore Suites, which included a helpful list of things to do in Singapore.

A corner suite and Michelin-star dining

By the time Josh and his wife arrived in Singapore on Feb. 21, the country had logged 86 cases of COVID-19. He described the airport as a ghost town with a lack of tourists.

"They already had those machines that you walk by that are digitally scanning you for temperature," he says, "and if you were over, whatever their magic number was, they immediately took you aside, and you were 14-day quarantined, no questions asked."

"It was weird," Josh continued, "but at the same time, it actually made for us having a better experience in Singapore because everything pretty much was still open. They were just taking precautions."

After a short cab ride to the airport, the couple arrived at The Ritz-Carlton, Millenia Singapore (booked using the Amex Fine Hotels & Resorts program for $1,700) for a four-night stay. They arrived early in the morning, so the two grabbed breakfast (which was free), and just 10 minutes after they arrived, their room was ready.

He was pleased to discover that he'd been upgraded to a corner suite, which Josh described as "bonkers."

The couple also got a $350 resort credit, which they used to dine at the Summer Pavilion, a one Michelin-star restaurant that features Cantonese and Chinese cuisine.

'Wish I was quarantined' in overwater villa

After spending a few days eating and relaxing in Singapore, the two were excited for their next stop. He did some research on exotic destinations — and after eliminating Tahiti and Bora Bora — settled on the Maldives.

The pair flew SilkAir business class from Singapore to Malé (MLE) for 39,000 KrisFlyer miles each, which they transferred from American Express, and $77 in taxes and fees.

Related: The best ways to get to the Maldives on points and miles

Upon arriving in Malé, the couple were greeted by an employee from the Waldorf Astoria Maldives, who took their bags and escorted them to the yacht that brought them to the resort.

Employees were waiting with umbrellas to shield the couple from the relentless sun, offered them welcome drinks, and took them on a tour of the resort.

The five-night stay cost the pair 480,000 Hilton Honors points. Josh says he already had roughly 50,000 or so points in his account and transferred the remaining balance (180,000 Amex points to Hilton) using a transfer bonus. As a Hilton Gold elite member from holding The Business Platinum Card® from American Express, they were upgraded to an overwater villa. Enrollment required.

"I wish I quarantined [at the villa]," Josh says. "I mean, just the most amazing, amazing thing I've ever seen."

Related: Where to stay in the Maldives using points and miles

After getting settled in their overwater villa, Josh says he and his wife had a relaxing, but eventful few days at the resort. The couple went snorkeling at a reef just feet from their villa. The two also took a guided jet-ski tour to a sandbar in the Indian Ocean.

"I can't imagine anything in the world being better than the Waldorf Astoria," Josh says.

The one downside, he noted, was how expensive the resort was. Even though the hotel was booked with points, Josh estimates the two spent roughly $4,000 in incidentals. The most costly fee — which is unavoidable — was the boat transfer to the resort at $1,400 total. The jet ski cost the pair approximately $400, and a Maldivian beach buffet sans alcohol cost nearly $500.

Related: Your ultimate guide to hotel and resort transfer fees in the Maldives

But if you find yourself at the Waldorf Astoria in the future -- and you're a Hilton Gold or Diamond member -- Josh found a workaround if you want to drink for free.

"There was a cocktail hour where they gave you ... unlimited booze for that hour," he says. "So we learned this, and we said, 'we're getting there at 4 p.m. every day."

Related: Choosing the best Hilton credit card for you

After a restful five days, it was time to return home and get back to normal life.

Their journey back to the U.S. started by booking Sri Lankan Airlines from Male to Colombo (CMB) in economy and then on to Doha (DOH). The two paid 48,000 Asia Miles total transferred from Amex and about $250 in fees. The pair initially planned to fly direct from Male to Doha in economy, but decided to break up the itinerary to travel in comfort.

For their trip from Doha back to New York, the pair flew Qatar Qsuite, which won the TPG Awards prize for Best International Business Class in 2018 and 2019. The two paid 75,000 points per person and about $400 in fees transferred from Amex to Asia Miles.

The couple traveled in two seats in the middle that they made into a double bed. How does Josh describe the experience?

Related: My thoughts on flying Qatar Qsuite as a group of 4

To pull off this epic Southeast Asia jaunt required roughly 720,000 points: about 200,000 Chase Ultimate Rewards points transferred to partners and the rest from American Express Membership Rewards. As for Josh's next adventure? He's already thinking about where to jet off to when the coronavirus outbreak subsides.

"We're planning an African safari next summer," he says, "[with] five days in Serengeti National Park and then another five days to a week in the Canary Islands."

Go big or go home, indeed. Thanks for sharing your incredible trip, Josh!

All photos courtesy of Josh Broder.