A tale of two flights: Anxiety, excitement mix onboard return of the 737 MAX 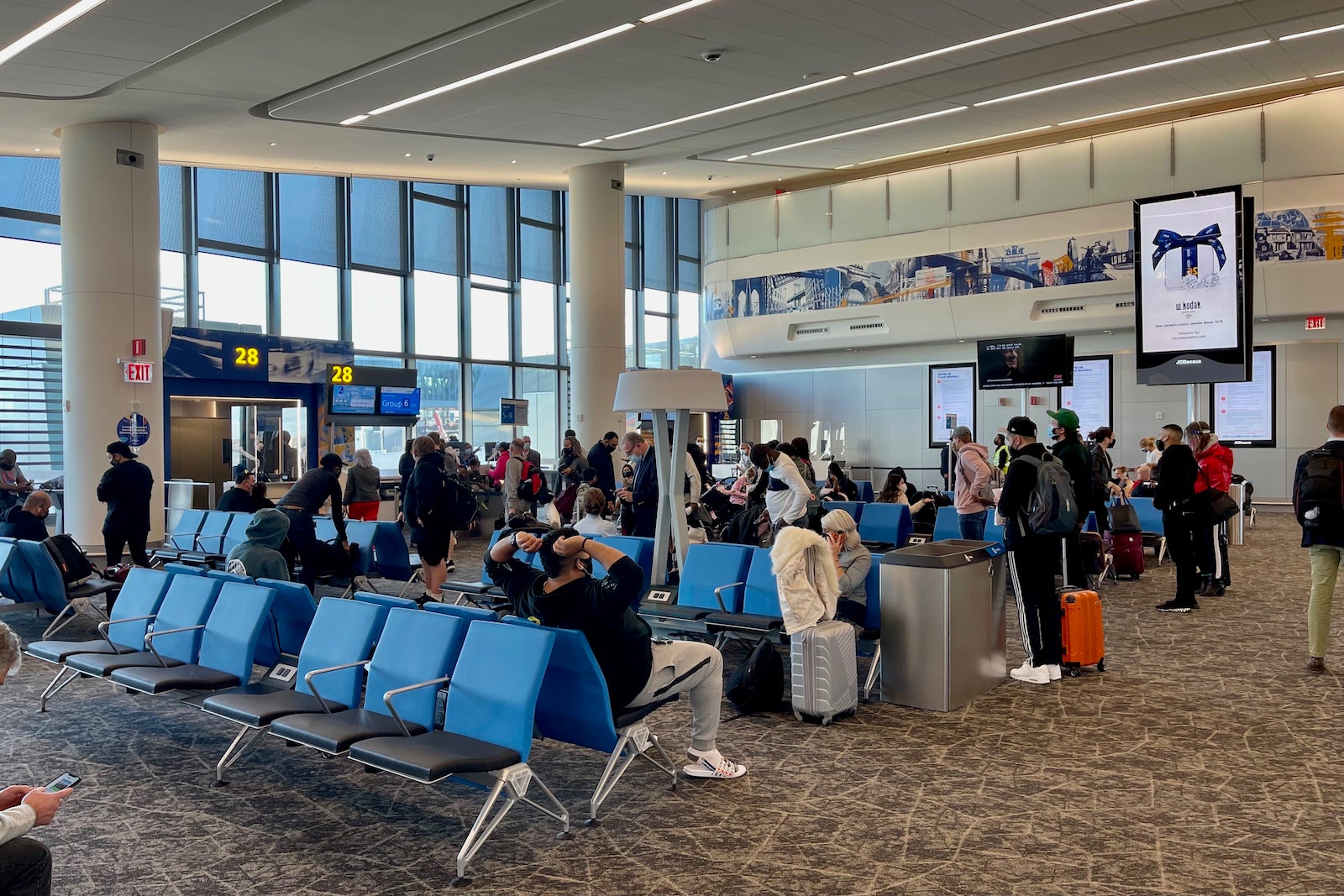 A tale of two flights: Anxiety, excitement mix onboard return of the 737 MAX
This post contains references to products from one or more of our advertisers. We may receive compensation when you click on links to those products. Terms apply to the offers listed on this page. For an explanation of our Advertising Policy, visit this page.

Showing up to the airport only to learn that your flight would be operated by a Boeing 737 MAX wasn’t the holiday surprise some Tuesday travelers were hoping for.

“Oh gosh, this is bad news,” one flyer exclaimed after learning that the flight he was about to board — American Airlines Flight 718 from Miami (MIA) to New York’s LaGuardia Airport (LGA) — would be operated by the MAX. That came as Fort Worth-based American became the first domestic airline to restart flights on Boeing’s beleaguered jet on Tuesday.

Now, the battle to repair the plane's tarnished reputation begins for American and other operators of the MAX. Flyers' thoughts on the MAX came into full display Tuesday for American's round-trip journey up and down the East Coast.

Many passengers were looking forward to Tuesday

The first flight to New York was filled with about 100 paying passengers, many of whom said they actually looked forward to being among the first to fly the MAX since it was cleared to fly after a 20-month grounding.

One passenger, George Quian, knew that he was about to board a MAX, quipping that “it is what it is.”

But, he did caution that “many people are just looking for the cheapest flight, so they may find themselves booked on a MAX.” (That would prove to be a harbinger of reactions to come later in the day in New York.)

American Airlines, as well as the other U.S. MAX operators (Alaska, Southwest and United), will allow flyers to change to a different flight or cancel for a credit if they’re worried about flying a MAX.

The jet was recertified by the Federal Aviation Administration on Nov. 18. The MAX was introduced in 2017 and quickly became a bestseller for Boeing, but was grounded worldwide last spring after crashes of a Lion Air 737 MAX 8 in late 2018 and an Ethiopian Airlines 737 MAX 8 in March 2019.

It will likely take some time for Boeing and its airline customers to win over a skeptical public.

But not everyone needs to be convinced. In addition to the paying passengers aboard American’s MAX flight to New York on Tuesday, about 25 standby flyers — a mix of airline employees and family members — joined for the hop voluntarily just to be part of the experience.

“A plane doesn’t sit on the ground for 20 months without things changing… I think this shows that the future of aviation is on the rebound,” said Julian Quian, an aviation enthusiast from San Diego who’d just flown to Miami to specifically catch a ride on the MAX.

Before departure, Capt. Sean Roskey received a round of applause after announcing “our flight to New York’s LaGuardia Airport will be flown on a Boeing 737 MAX." The cheers came mostly from the non-revenue passengers, including the captain’s wife and the first officer’s mother, both of whom were seated a few rows behind the armed cockpit door.

The flight to New York was otherwise uneventful. Some slept while others tracked the progress on apps like FlightRadar24.

Before long, the New York State quarantine forms were distributed and beautiful views greeted those seated on the port side of the plane during the expressway visual approach to LGA.

More: American Airlines becomes first US carrier to put passengers back on the 737 MAX

Anxiety was in the air for the return

After landing at the new gates in LGA’s Terminal B, it was time to turn back around to Miami. This time, the crowd was less celebratory about flying a MAX.

“I honestly thought someone famous was coming off the plane,” said Bridget Blaney, referring to all the television cameras set up near the jetway.

When asked if she knew that her Miami flight would be operated by a MAX, Blaney said: “I didn’t know until just now, and now I’m nervous.”

Other Miami-bound flyers echoed Blaney’s sentiments, though some were more animated in expressing their thoughts about it.

“I wish there was some kind of discount for putting our lives at risk,” said Teddy Zharnitsky, a 20-something-year-old heading to South Florida for the New Years' holiday. “I wouldn’t have (expletive) picked this flight had I known.”

“I just told my mom and now she’s all worried about me,” another passenger remarked.

Unlike the Miami departure, anxiety was the most salient feeling around the gate area at LaGuardia. One passenger started visibly shaking upon hearing the announcement that the flight would be operated by a MAX.

Despite the anxiety on display in New York for American's second MAX flight of the day, American executives don't believe customers are actively trying to avoid the jet when selecting flights.

“We haven’t seen anything that suggests that people are booking away from the MAX,” American president Robert Isom said earlier Tuesday at a pre-departure briefing in Miami.

“At American, we are trying to be perfectly transparent about the aircraft you’re flying on,” he added. Passengers should see notices about the MAX during booking, as well as a verbal announcement at the gate.

Still, some wondered if American should be doing even more.

“You really had to look at the fine print to see anything about the MAX," Flight 718 passenger Joseph Neray told TPG before boarding. "They let me know multiple times how much a bag would cost, but the fact that the flight was operated by a MAX wasn’t prominently displayed."

“It wasn’t very obvious to the untrained eye. Had I known, we would’ve taken an earlier flight,” he added.

At least Neray arrived at the gate early enough to hear the pre-boarding announcement. Some latecomers didn’t learn that they were on a MAX until the captain’s welcome greeting.

Prior to the crashes, the jet's branding was emblazoned on the front of the seat-back safety cards, making it easy to see the exact aircraft variant. Now, they simply say “737" as part of a larger fleet standardization project.

More: Southwest has no plans to rebrand the Boeing 737 MAX

Even if it's safe, it's still uncomfortable

The flight back to Miami was nearly sold out with roughly 160 passengers, making for a tight squeeze in American’s dense “Oasis” configuration.

With just 30 inches of pitch in coach, some flyers might still prefer American’s older aircraft. Plus, the two aft lavatories are some of the smallest in the skies, and the toddler-sized sinks continue to squirt water all over the walls and floor.

Fortunately, American is working on some — but not enough — of the issues with its cramped configuration. Oasis 2.0, internally known as Project Kodiak, will add a bulkhead between first and coach, additional legroom in first class and more padding to the recliners. The doors to the aft lavatories will also be fixed such that they'll no longer slam into each other.

Despite the nerves, no hiccups on Tuesday

For all the pre-boarding anxiety, it was smooth sailing once onboard. All the concerned flyers continued on with their travel plans. An American spokesperson confirmed that no passenger on either of Tuesday’s flights voluntarily switched to a different, non-MAX flight.

In the end, Tuesday's flights were no different than any other domestic journey — and that’s exactly the outcome American, Boeing and other MAX operators were hoping for as the plane begins to fly again for U.S. carriers.

Of course, it will take more than one day – or even one month – of uneventful flying before customers’ perceptions of the MAX begin to change.

Soon American will be joined in the U.S. by United, Alaska and – eventually – Southwest in returning the jet to America’s skies. The others will likely craft their own narratives as the jet begins more widespread flying in 2021.

For now, though, one day is in the books for American and its recertified MAX.