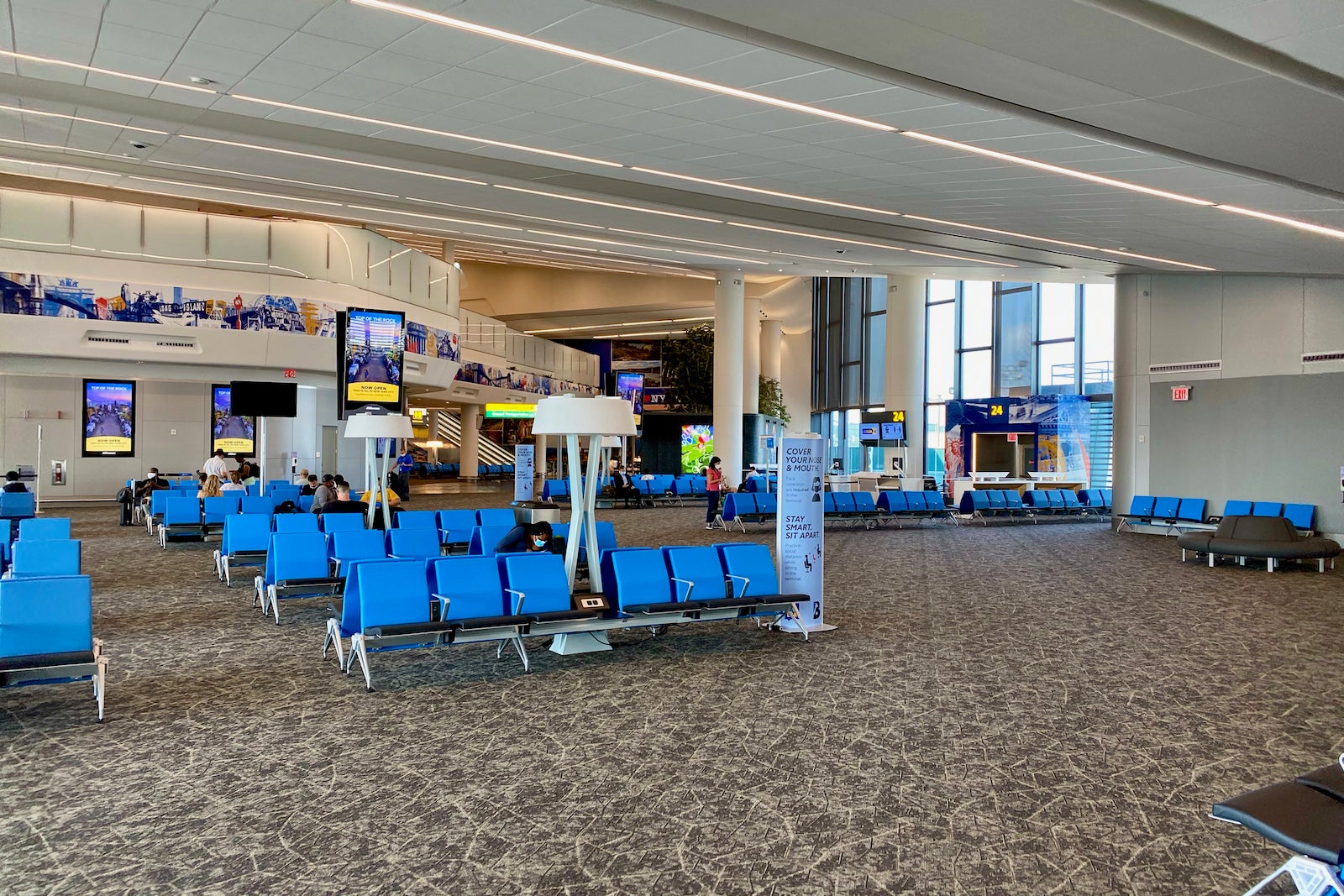 First look at American Airlines’ brand-new terminal at LaGuardia Airport
This post contains references to products from one or more of our advertisers. We may receive compensation when you click on links to those products. Terms apply to the offers listed on this page. For an explanation of our Advertising Policy, visit this page.

The next time you travel through New York's LaGuardia Airport (LGA), you may not believe your eyes.

What was once one of the worst airports in the country is quickly becoming one of the nation's finest. As part of the LGA redevelopment project, nearly the entire airport is receiving an overhaul.

Much of the new Terminal B has opened within the last three months. In June, the Terminal B Arrivals and Departures Hall opened — and it's simply stunning. Flyers on all airlines operating from Terminal B will experience this new facility that's infinitely nicer than its predecessor.

The hall is where all check-in and security screening is completed. Once airside, you'll be in a centralized concession area with floor-to-ceiling windows, top-notch retail and dining outposts and plenty of seating.

Then, when it's time to board, you'll be funneled into one of two concourses. The Eastern Concourse has been open since 2018, but it's now connected to the main hall via a pedestrian bridge that soars nearly 100 feet above the ground. Flyers on Air Canada, Southwest and United will use this concourse.

Sign up for the free daily TPG newsletter for more airport news!

On Aug. 5, the brand-new Western Concourse welcomed its first passengers. Once fully complete, it'll be the home to American Airlines' LaGuardia operation.

In the first phase which opened last week, seven of the 17 gates are now operational, along with a Gotham News store and a portion of the indoor park, with some greenery and benches.

The remaining ten gates are slated to open by early 2022. AA will then consolidate all its flights to the Western Concourse. Until then, flights are split between the new concourse and the old D gates. A second pedestrian bridge will connect the main hall and the Western Concourse in 2021.

In the meantime, AA flyers will get dropped off at the main hall and then make their way through a temporary passageway to the new Western Concourse. Though it's quite a walk, at least the hallways aren't nearly as crowded or dark as before.

Once you enter the new gate area, you'll immediately be facing the indoor park, which was inspired by the small parks spread throughout New York City.

There's some seating in this area, as well as a sculpture of the Big Apple that was originally gifted to AA in 2006. The artist fully restored the piece, and it's now sitting in the new LGA.

Related: A brand-new Amex Centurion Lounge is coming to LGA

Right across from the park are escalators that will be activated when the new pedestrian bridge is completed in 2021.

At the top of the escalators, you'll find a large open-air space that will soon be home to the brand-new American Airlines Admirals Club at LGA. Much like the open-air United Club in the Eastern Concourse, this new Admirals Club should be a massive improvement compared to the existing one at LGA.

Back at the bottom of the escalators are the gates to your right. If you turn left, you'll see a nearly 56-foot-high construction wall that will be knocked down when the remaining 10 gates are ready to open.

There's plenty of blue-colored seating spread out throughout the gate areas.

Every seat has access to power outlets, USB ports and, my personal favorite, USB-C connectors for the latest gadgets.

There's also some high-top barstool seats spread out around the concourse.

Unlike the old terminal, flyers will definitely appreciate the abundance of natural light seeping in from the soaring ceilings and glass-paned walls. There's also plenty of freestanding lamps to add even more light to the terminal.

Like the rest of Terminal B, the bathrooms received a massive upgrade. There's now plenty of space in the modern, mirror-lined restrooms, along with functioning sinks, toilets and paper towel dispensers.

Related: LaGuardia's new terminal is a major upgrade — see for yourself

If you are traveling from the new Western concourse, be sure to check out the shops before making your way to the gate.

The Gotham News store has a few essentials, but there's a larger assortment of stores and dining establishments in the main hall post-security.

Behind the Gotham News store is the concourse's second art installation. Titled A Queens Tribute, the artist designed a "visual postcard" from Queens, with colorful designs on an "L", "G" and "A". The piece faces the tarmac so that it's seen from planes as they pull into the gate.

Though the Western Concourse will primarily serve American Airlines, it’ll be interesting to watch what happens with JetBlue’s presence at the airport. Right now, JetBlue is located in the Marine Air Terminal, which opened in 1939 and was built to handle Pan Am’s fleet of seaplanes.

The Marine Air Terminal is located at the far end of the airport, far away from the new AA gates. Because of the new New York-focused partnership between AA and JetBlue, I wouldn’t be surprised to see JetBlue move into the Western Concourse once it’s fully completed. That way, flyers on both airlines could seamlessly connect between flights without needing to take a bus or reclear security.

But, in the meantime, the now-open Western Concourse is a harbinger of good things to come for American Airlines and LGA.

Some lucky flyers will already get a chance to fly from the new gates, and once the project is complete by early 2022, LGA — and Terminal B in particular — will truly be world-class.