The 'other' New York airport that's making a splashy comeback 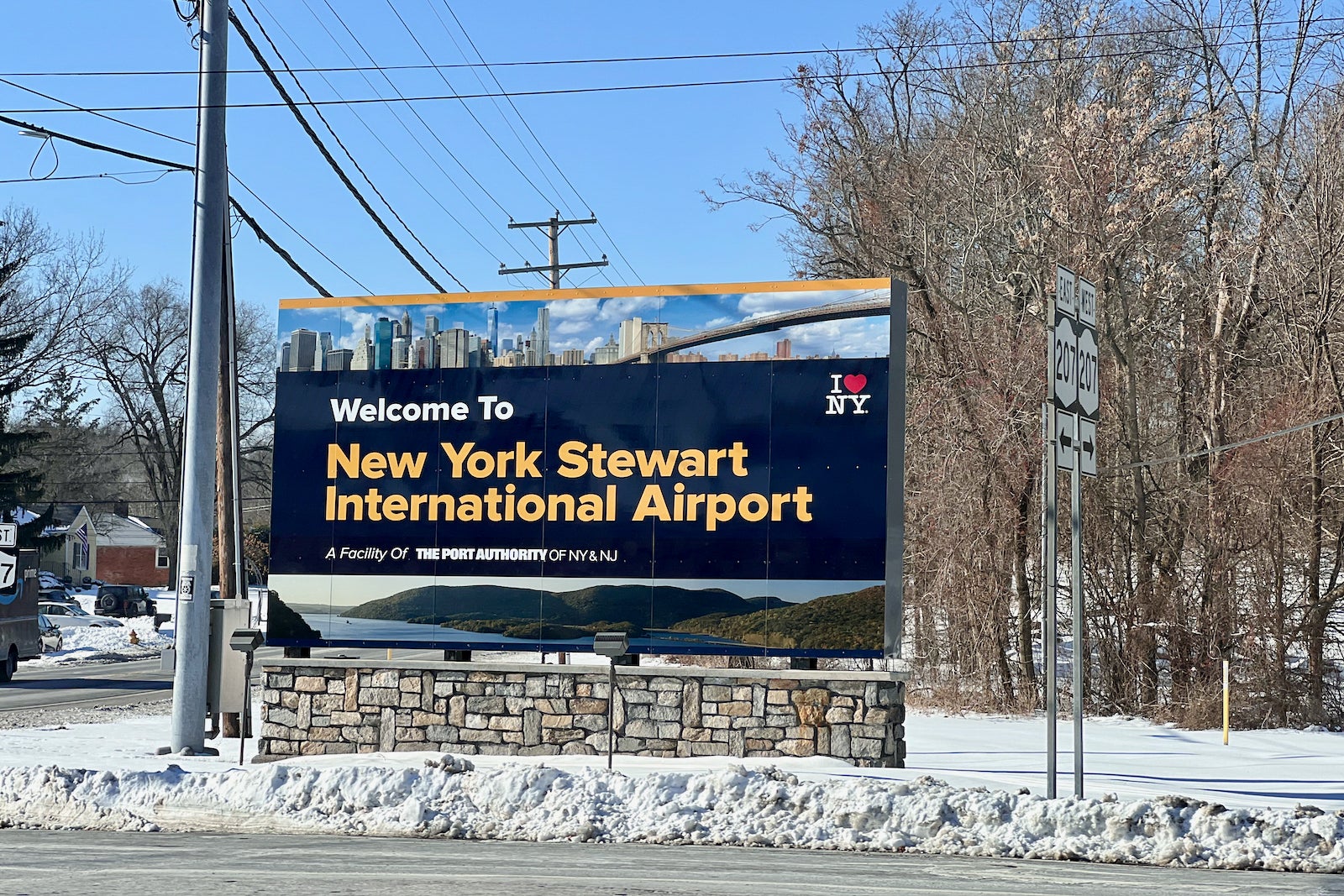 A simple Kayak search for flights between the New York City area and Orlando might leave you surprised.

Unless you look carefully, you might be about to purchase a ticket from an airport you might've never heard of: Stewart International Airport (SWF) in Orange County, New York.

Located roughly 70 miles northwest of Manhattan, Stewart isn’t one of the “Big 3” NYC-area airports — LaGuardia, JFK and Newark — that are most popular with the region’s travelers.

Though its physical footprint is larger than Newark’s, only two airlines, Allegiant and Frontier, serve Stewart at the moment.

But, that’s about to change.

This summer, the airport is slated to get its first international flights since before the pandemic. Icelandic low-cost carrier Play recently announced plans to add New York Stewart as its third U.S. destination, after Baltimore/Washington and Boston.

The new international service is putting Stewart on the map once again, two years after the pandemic started having an outsized effect on connectivity at smaller airports.

“This is really special. I mean, this is really unique. It's not every day that an airline says we're going to start, trans-Atlantic flying from your airport,” said Alex Minton, manager of air service development and industry relations at the Port Authority of New York & New Jersey, which has been responsible for overseeing Stewart since it took over the operating contract in 2007.

Putting Stewart on the map (and in the search engine)

Before the pandemic, Stewart was a rising star in the Port Authority’s portfolio.

It was more than just a popular diversion airport during severe weather events, such as when a Singapore Airlines Airbus A380 double-decker landed there for the first time during a blizzard in January 2018.

In 2019, the airport had hub connectivity with American (to Philadelphia) and Delta (to Detroit), along with point-to-point flying on Allegiant and JetBlue.

Norwegian Air Shuttle had even become the airport’s “anchor tenant.” At its peak, the airline was flying daily service from Shannon, Ireland (SNN); and Edinburgh, Scotland (EDI); as well as twice-daily flights from Dublin (DUB) all aboard the fuel-efficient Boeing 737 MAX.

When the jet was grounded globally, Norwegian’s Stewart service faced a big setback. The airline subbed other aircraft on certain routes and suspended others indefinitely. Then, facing growing losses, Norwegian decided to pull out of Stewart entirely in late 2019.

The news didn't get any better for Stewart. Months later, the pandemic came stateside, causing Delta and JetBlue to pull their flights.

Though its connectivity was pared down, the Port Authority was already in the midst of building a new $37 million, 20,000-square-foot international arrivals facility at Stewart, which was originally designed for Norwegian.

Construction ultimately wrapped up at the height of the pandemic in November 2020. With Norwegian long gone, it was a gloomy outlook for Stewart and its new international arrivals hall.

But Minton had been hard at work in the background trying to make Stewart relevant again.

He had recently worked with the major third-party booking platforms, like Expedia and Orbitz, to get Stewart (SWF) to show up as an “NYC” airport, a major win in his book.

"When we had international service here, we worked to get 'SWF' in the 'NYC' booking designation... Now, if you put in Iceland [as your destination], Stewart will likely be closer to the top, because it will probably have the lowest fare," he said.

He also emailed Play’s CEO when he heard they were launching U.S. flights to sell him on serving Stewart.

His efforts culminated on Feb. 1, 2022, when Play made its official announcement that it’s adding a new route-map pin in New York Stewart.

The airline will operate daily service to Keflavik, Iceland (KEF), with plenty of one-stop connections to seven cities in Europe, including Paris and Berlin.

Play is marketing Stewart as an alternative to flying to the congested Newark or JFK airports.

The airline says that reduced taxiway congestion, shorter immigration and customs lines and a faster baggage handling system will mean that the total time from arrival in Stewart to your final destination in New York City will be similar to arriving during rush hour in Kennedy or Newark.

The infrastructure is more modern...

Turns out, the airline isn't playing around.

The new international arrivals facility is indeed a major improvement. Before the pandemic, long-haul travelers would need to pass through a temporary facility with a retractable wall to clear customs and immigration.

Now, flyers will be greeted by a large mural of the Hudson Valley and New York City, updated signage and modernized facilities, including new restrooms built in the Port Authority's latest design standards.

A fully loaded Airbus A321neo should be cleared in about 30 minutes, Minton said. That's a massive time savings compared to clearing immigration in one of the busy halls in Newark or JFK.

... but getting there can be an adventure

But despite the time savings on arrival, getting to and from the airport may be the hardest — and most expensive — part of your journey.

More than anything, don’t be fooled by the mural of the Manhattan skyline in Stewart’s new international arrivals area — you won’t catch your first real glimpse of the skyscrapers until much later in your journey.

Stewart isn’t readily accessible with any existing rail links, and the Port Authority knows that. That’s why the agency has partnered with Hudson Transit Lines to offer a nonstop bus service conveniently timed with international departures and arrivals for flyers headed to or from Manhattan.

Priced at $20 for adults and $10 for children, the bus connection will be an invaluable option for tourists visiting the city.

But, the bus is only as good as its destination: the Port Authority Bus Terminal on 42nd Street and 8th Avenue In Manhattan.

If Midtown isn’t in your plans, or you’re headed to another borough, Stewart definitely may not be right for you.

Personally, when I visited the airport for the Play announcement, I took an Uber to the airport. Priced at over $200, the 90-minute drive from my lower Manhattan apartment was expensive and took a while.

It almost felt like I had driven to Philadelphia, except that the airport had fewer flights and it wasn’t selling any soft pretzels or cheesesteaks.

In fact, the only snacks available at the check-in area were located in a small vending machine. King-size M&Ms were available for $3.25 — the same price as in JFK's Terminal 5.

On the way home, I caught a ride to the Metro-North train station in Beacon, New York, where I hopped on the next train bound for Manhattan. The 15-minute drive, along with the $17.50 off-peak one-way fare, and then a $2.75 subway ride from Grand Central to Union Square had me wishing that the nonstop bus service was already available.

That said, those who live closer to Stewart or who are renting cars or planning to park at the airport will find it infinitely more convenient than navigating the stress of New York’s largest airports.

After all, long-term parking, located just steps from the terminal, maxes out at $12 per day. At LaGuardia, that number jumps to $45, and you may even need to take a bus to get to your terminal.

Local residents can fill flights, too

Stewart’s appeal isn’t limited to price-conscious travelers headed to or from New York City, or those looking to save on parking.

There are three million people who live within 30 to 40 miles of the Stewart airport, according to Minton. And that population travels a lot, he told TPG.

"In 2019, we have data that shows that this catchment generated almost five million trips," he said.

Most of the area's residents are traveling through other nearby airports, whether it's the "Big 3" near NYC, or through Westchester (HPN), Hartford (BDL) or Albany (ALB).

"If you live within 30 or 40 miles of Stewart, you're taking two or three trips a year. You're probably spending an hour and a half on the road and then however much you're spending to park," Minton added.

Plus, there are some popular destinations near Stewart that could attract tourists to this area, including the nation's largest Legoland theme park and the Woodbury Common Premium Outlets.

That's why the Port Authority has been working to educate key decision-makers about Stewart’s catchment area as it pitches new airline services.

Sure, there are plenty of international travelers who are looking to save a few bucks to make the trek from Orange County, New York, to Manhattan, but there are plenty more in the airport's backyard who could use more convenient flight connections.

"We're really going out and educating people on the benefit of the facility, the efficiency and about the catchment area," he said.

As Minton and his team look toward the future, they're excited about the prospect of adding more airlines at Stewart. Norse Atlantic Airways is poised to become the second international carrier at the airport, as the airline has already received approval to add nonstop service from Norway to Stewart.

What's next is anyone's guess, but Stewart Airport is making a comeback.