An A380 in Newburgh, And Other Crazy Diversions From the Bomb Cyclone

Articles
Emily McNutt is The Points Guy's Global News Editor and is based in London.
Follow
Jan. 05, 2018
•
4 min read 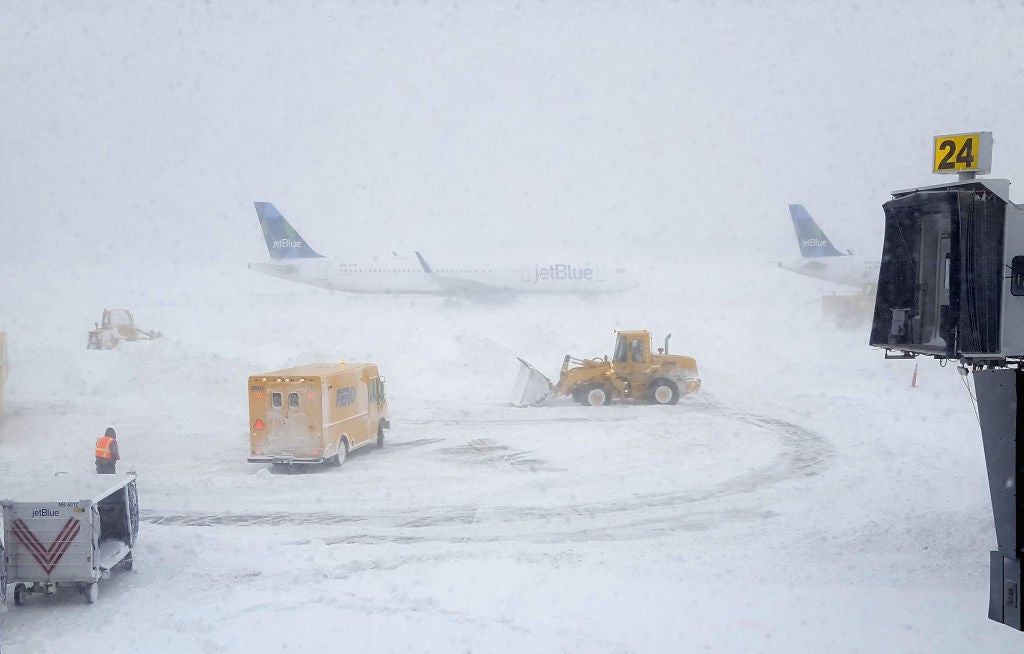 An A380 in Newburgh, And Other Crazy Diversions From the Bomb Cyclone
This post contains references to products from one or more of our advertisers. We may receive compensation when you click on links to those products. Terms apply to the offers listed on this page. For an explanation of our Advertising Policy, visit this page.

Thursday's "bomb cyclone" left air travel throughout much of the US Northeast at a standstill. In total, airlines canceled more than 4,300 flights on Thursday, with delays and cancellations carrying over into Friday. With the cancellations also came a complete shutdown of New York JFK among other airports, which snarled traffic even more: Some already-airborne aircraft that were presumably trying to beat out the storm were left with having to find a different airport to land.

TPG contributor Jason Rabinowitz monitored the situation and documented many of his findings on Twitter. Around 11:00am ET on Thursday, JFK suspended flights due to strong winds and whiteout conditions.

As a result, a number of flights already en route to JFK were forced to divert. According to Flightaware, there were at least 96 diversions across the East Coast of the US.

Among the diversions, arguably the most notable was a Singapore Airlines A380, the largest passenger plane. For JFK, which receives several A380 flights every day, dealing with 500-seat giant is no trouble. The biggest of New York's airports is well equipped to handle such a mammoth aircraft, with a wing span of 262 feet. But the small airport where a Singapore Airlines A380 was forced to land on Thursday definitely isn't.

As SQ Flight 26 from Singapore via Frankfurt (FRA) to JFK was closing in on its final destination, the aircraft was forced to divert, as JFK had suspended operations. The A380, which was carrying 325 passengers, landed safely at Stewart International Airport (SWF) in Newburgh, NY, about 80 miles north of New York City. The 11,800-foot runway is plenty enough for the giant, but the jetways at the gates can't reach the aircraft, and passengers were forced to deplane via a set of stairs.

According to Singapore Airlines, the aircraft will eventually fly from SWF to JFK, before returning to Frankfurt. Seeing an A380 on a 80-mile hop isn't exactly common.

While not an A380, the Albany airport also got to handle a big jet it would never have seen otherwise: a Boeing 787-9 operating Norwegian Air Flight 7013, from London (LGW) to JFK, whose captain decided to divert to Albany International (ALB).

According to the Albany Times Union, the more than 300 people on board the Norwegian Dreamliner cleared customs and immigration at ALB. The passengers then boarded buses, which got them to JFK, their intended destination — a journey that takes three hours when the weather is good. The airline said that it would fly the Dreamliner down to JFK on Friday, where passengers would then be able to collect their luggage.

And then, there were the "flights to nowhere." Several US-bound flights coming from Europe tried to make the trek, but ultimately turned back around for their original destination. For example, Iberia Flight 6253 from Madrid (MAD) to New York was more than four hours into the flight before the captain decided to head back to the original departure airport.

With the worst of the storm now over, many airlines are hoping to return to normal operations by this weekend. On Friday, travelers should expect some residual delays and cancellations. And if you have a flight to, from or through the East Coast on Friday or Saturday, call ahead to check with your flight's status before heading to the airport.