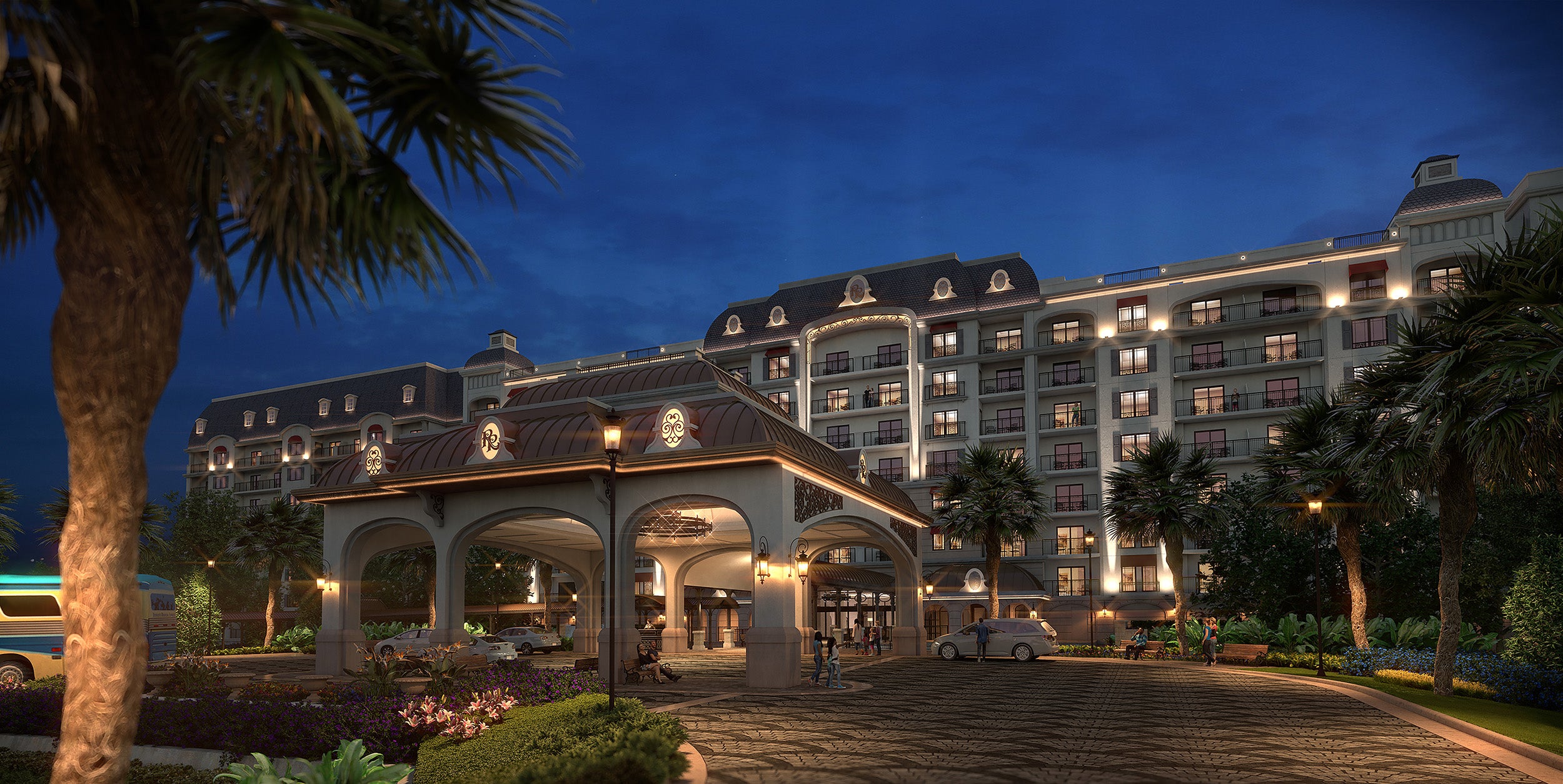 You Can Now Book the First All-New Disney World Resort to Open in 7 Years
This post contains references to products from one or more of our advertisers. We may receive compensation when you click on links to those products. Terms apply to the offers listed on this page. For an explanation of our Advertising Policy, visit this page.

Put on your Mickey or Minnie ears while simultaneously grabbing your credit card as a brand-new Disney World resort is now accepting bookings for late 2019! This is the first free-standing, all-new resort to open at Walt Disney World since 2012 when Disney's Art of Animation opened its doors (Bay Lake Tower at Disney's Contemporary Resort opened in 2009 and Copper Creek Villas at Disney's Wilderness Lodge opened in 2017, both as resort add-ons).

But Disney World's all-new Disney Vacation Club (DVC) property, Riviera Resort, is nearing its fall 2019 opening date and rooms are officially available for booking for dates beginning Dec. 16 (though we expect it to open before then). Prices for available dates currently start at $600+ for rooms that sleep five. Rates go up from there for multi-bedroom villas. Smaller tower studios that sleep two can be booked from about $500+.

Disney World is a city unto itself when it comes to hotel rooms. Similar to in Las Vegas, 2,000-room mega-hotels are the rule, not the exception at Disney -- though Disney at least makes them feel like they aren't 2,000-room resorts. However, when it comes to new Disney Vacation Club properties located at Walt Disney World, the sizes tend to run much smaller. This soon-to-open DVC resort has just 300 rooms -- small by Disney standards.

Other than being shiny and brand-new when it opens later this year, what makes Disney's Riviera Resort extra special is that you will be able to take the Disney Skyliner gondolas from the resort to EPCOT as well as Disney's Hollywood Studios, home to Star Wars: Galaxy's Edge that is also set to open in late 2019.

While this resort is technically a timeshare property, you can book rooms at these resorts just like regular Disney hotel rooms with good old cash (and lots of it). Disney owns a number of points at each DVC property that they control and make available for bookings. That's normally what you see when you check out the Disney World website for hotel bookings. But in this case, since Disney's Riviera Resort hasn't yet sold out to Disney Vacation Club owners, the 300-room property is very available for non-DVC members with cash. If the past is any indication, Disney will sell all of the timeshare units at Riviera Resort at some point.

What to Expect at Disney's Riviera Resort

Disney's Riviera Resort is meant to transport you back to the early 1900s along the European Riviera. Expect to see that Mediterranean influence throughout the property through design, decor, theming and meals.

But don't think that European Riviera theming means stuffy, as the new artwork of the pool prominently features a castle rock slide into a pool that appears to have a zero-entry area and a separate splash area for the littlest crew.

At Riviera Resort, Disney is adding a new room type that would seem befitting of a resort in close proximity to EPCOT and Hollywood Studios given EPCOT's various annual festivals and the inevitable draw of Gen-Xers to Star Wars: Galaxy's Edge. The new two-person studio seems to be an appropriate nod to the growing population of kid-free visitors. However, note that even for the $500+ per night this room is currently booking for, the queen bed in this room folds down from the wall -- so our jury's still out on that one. We'd likely need the price to be much lower to pull down our own bed each night.

One of the most special elements of Disney's newest resort is the restaurant on top of the property. Named Topolino (how the Italians say Mickey Mouse) the restaurant will offer French and Italian cuisine prepared over a wood-fired grill, paired with excellent wines from the region. The location will mean stellar views of the nighttime fireworks at both EPCOT and Hollywood Studios. Mornings at Topolino will feature a prix fixe Disney character breakfast.

At Disney's Riviera you'll also find Le Petit Café that serves coffee by day and wine by night. There will also be a quick-service restaurant, Primo Piatto, near the pool.

Once Disney's Riviera Resort becomes bookable to DVC members on points in spring 2019, that will likely become a cheaper pathway to booking a room here if you rent a member's points (here's how). Also on the way at Disney World is a nature-inspired resort with 900 hotel rooms and Disney Vacation Club villas, set for a 2022 opening and the much-anticipated immersive Star Wars hotel.