Articles
Dia Adams contributes to TPG Family, writes The Deal Mommy, and is the mom of a teen and a tween. Her passion lies in teaching families how to travel more while keeping their savings and sanity.
Follow
Jan. 10, 2019
•
11 min read 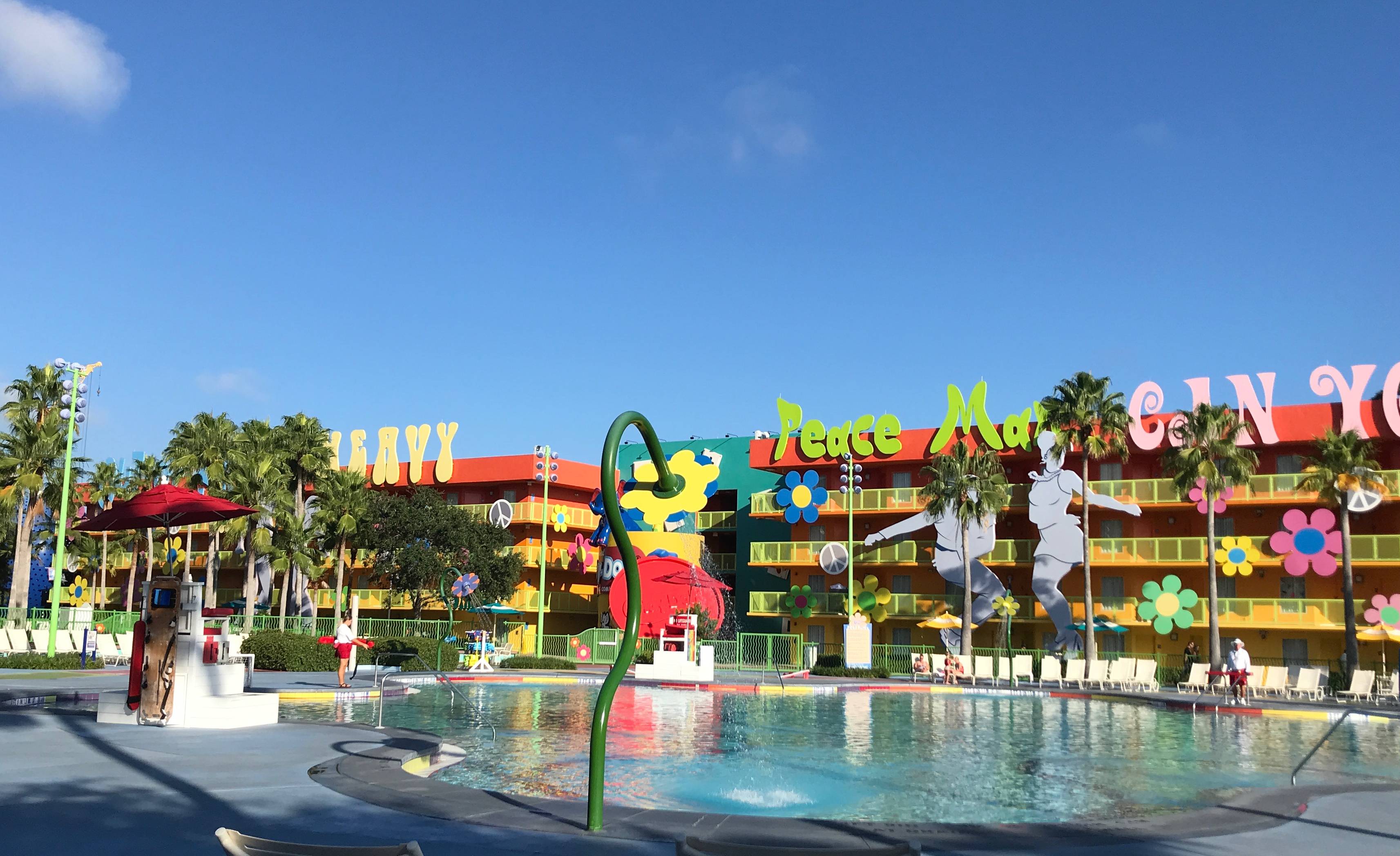 It's probably safe to say that no Walt Disney World vacation is going to be cheap. Even if you decide to stay off-site using points, a trip to the Disney parks will still pack a punch when it comes to buying tickets and dining out. If you're new to Disney vacation planning, start by checking out TPG's Ultimate Guide to Walt Disney World Resort.

There are three categories of Disney World resorts: deluxe, moderate and value, and while the exact prices for those categories varies by season, the name generally denotes a general pricing band.

We recently stayed at Pop Century, a value resort, and I'm happy to report that the experience didn't feel cheap despite a low (for Disney) nightly rate.

Since this was a last-minute trip, my options were more limited than usual. Under normal circumstances, I would have perused Hotels.com and booked there if the rate had been the same as directly with Disney. Using the Capital One Venture Rewards Credit Card, I would have earned 10x miles at Hotels.com and a free night after 10 stays through Hotels.com's loyalty program (when booked and paid via Hotels.com; offer ends Jan. 31, 2020).

Disney Resorts are different from most chain properties in that third-party bookings afford you the same benefits as booking direct with Disney. You have to connect your reservation to the My Disney Experience account (and you may have to call to get that Disney confirmation number), but once you are on property, you are treated just like any other guest.

In this case, only Disney's website had rooms available, so I booked a preferred room for $144 per night directly with Disney.

To maximize your points-earning potential when paying for a Disney World Resort stay, consider paying with the Chase Sapphire Reserve® and earn 3x points for the stay not only for your room but for everything you charge to the room. Or you can use your Capital One® Venture® Rewards Credit Card or Barclaycard Arrival Plus World Elite Mastercard to book and then use the points from those cards at a rate of 1 cent per point to cover the charges.

Pop Century was in the Wide World of Sports Complex in Disney World, directly behind the Art of Animation Resort. The two are nominally connected, but construction prevented me from walking between the resorts.

Pop Century was served by Disney's Magical Express, so you could get a free ride to and from the airport. You could also have your luggage delivered directly to your room, but, if you do, make sure to keep out the stuff you'll need. I've known luggage delivery to take up to six hours.

An UberX from the Orlando International Airport (MCO) would have taken about 25 minutes and cost around $30 to $40. I took the Magical Express, which took about 30 to 40 minutes.

Disney buses go between Pop Century and each one of the four parks, as well as the waterparks and Disney Springs. I found the buses to be standing-room only at park opening and closing, even though the resort's crowd level was a one out of 10.

The bus leaving the Magic Kingdom at closing time was also among the loudest transportation I've ever experienced. My test showed 115 decibels, the same as standing next to an ambulance siren. My 20-minute standing ride was unpleasant, to say the least. If I had the budget or had to go from resort to resort, I would've used an Uber or Minnie Van.

Those planning trips for later in 2019 and beyond will want to note that Pop Century is one of the Disney Resorts that will be served by the Skyliner gondola! This will open up a new way to get from Pop Century to Epcot and Hollywood Studios.

Because I registered the trip on My Disney Experience, I already had my MagicBand. That MagicBand was my room key, and I elected to receive a text with the room number when the room is ready. I skipped the lobby entirely and went straight to my room.

I don't typically pay for a preferred room over a standard one but am glad I paid the extra $15 per night at Pop Century. My room was a two-minute walk from the lobby, while some standard rooms were at least a 15-minute walk away. I was grateful to skip that walk when I returned to the hotel after Mickey's Not So Scary Halloween Party.

Rooms at Pop, like every value and moderate resort, had motel-style, open-air entry. Disney sells some rooms as having a lake or pool view, but that's a misnomer, as you'll share your view with other guests and maid carts.

Every inch is utilized in a Pop Century room. Our room had been recently refurbished, and it showed. Value-resort rooms are small, around 260 square feet, and reminded me of a cruise cabin. The room design was ingenious, with a queen bed and a Murphy bed that could be used as a table during the day.

People usually avoid pullout beds, but Disney does them right. The mattress felt like a bed, not a pullout sofa. Even better, Disney hid adorable details inside our Murphy bed.

The rooms had plenty of storage, including under the queen bed. I counted an impressive 10 USB ports, and the internet was just upgraded. I got a "fast" rating when I tested it at 8am, a peak usage time.

Disney revamped its bath products to reduce waste, so everyone now gets the H20+ sea salt products that used to be solely for deluxe resorts. You couldn't, however, take them home, as they were bolted to the shower in this room.

Rooms came with either a shower or a bathtub/shower combo. If you need a bathtub, be sure to request it. My shower was plenty large with good water pressure.

Rooms had coffeemakers and refrigerators, but I have one word for Disney coffee: "bad." If I had space for two more words, I'd add "bitter" and "watery." Disney does so much dining right that I fail to understand why they'd use the universally panned Joffrey's coffee in rooms and food courts. Even Folgers is a step up. I bring my own coffee and filters.

A warning about housekeeping: Be sure to use the "do not disturb" sign when you're sleeping. I got a nasty surprise at 8:45am when a maid opened my door. I had closed down the Magic Kingdom at 1:30am the previous night and didn't appreciate the PJs wakeup.

I didn't spend any time eating at the resort, which didn't emphasize dining. The Everything Pop food court was, well, a food court. The highlight by a mile was the wood-fired oven, so I'd go straight to the pizza station on the left. I'd tried the wood-fired pizza on a past visit, and it looked (and tasted) the least like it came from a food court among the food options.

At breakfast? Well, it was still a food court, albeit with Mickey waffles. I would go to the pastry counter the night before for a cinnamon roll (which I did), assuming I brought my own coffee. It's hard to go wrong with a Disney pastry.

Pop Century, like all Disney Resorts, was elaborately themed. Pop, as it's known by fans, is designed to take guests on a journey from the 1950s to the 1990s. Toys and ephemera line the lobby, making those of us over 30 feel old. Items, such as an Atari, that I used as an teen, are now relics. I naturally gravitated toward the '80s memorabilia — totally righteous, dude!

The main pool was the Hippy Dippy Pool, modeled after the groovy 1960s. Smaller pools were in the 1950s and 1990s sections. Each building represented a decade, but the hotel rooms did not reflect the outdoor theming. Outdoors, I felt like I'd fallen into the movie "Honey I Shrunk the Kids" with oversized Play-Doh containers and Rubik's Cubes at every turn.

Many resort guests I saw made a beeline for the theme parks and missed the fun at the resort. That was a shame, as you could make a day of the various movies, pool games, crafts (I especially liked the Mickey tie-dye), scavenger hunts and other types of fun. Disney Resorts offer lots of free activities around the pool, and Pop was no exception: Movie nights by the pool were after dark, weather permitting. Pool games tended to go on in the afternoon and varied by day. Most activities were free: trivia games, dance contests, etc. Some, however, were paid, like making tie-dyed T-shirts.

Disney's Pop Century Resort impressed me, and I went there expecting to be somewhat disappointed. I'd happily stay there again with up to three people. I can't say that about the All-Stars Resort or even Art of Animation's Little Mermaid rooms.

The rooms sleep four, at least on paper, and I know many families of four who have done it, but 260 square feet is tight for four people. In the same price range, if I didn't need Magical Express, I would consider a Disney Springs hotel. If I could splurge, I would stay at a moderate resort, which are 314 square feet — those extra 54 square feet make a difference in comfort.

Related stories
What are points and miles worth? TPG’s December 2022 monthly valuations
Capital One Venture X to lose Priority Pass restaurants and spa services as of Jan. 1, 2023
December 2022
Current Hyatt promotions: Bonus points on stays and dining plus double stay credits
Featured image by Disney's Pop Century (Photo by Dia Adams)
Editorial disclaimer: Opinions expressed here are the author’s alone, not those of any bank, credit card issuer, airline or hotel chain, and have not been reviewed, approved or otherwise endorsed by any of these entities.