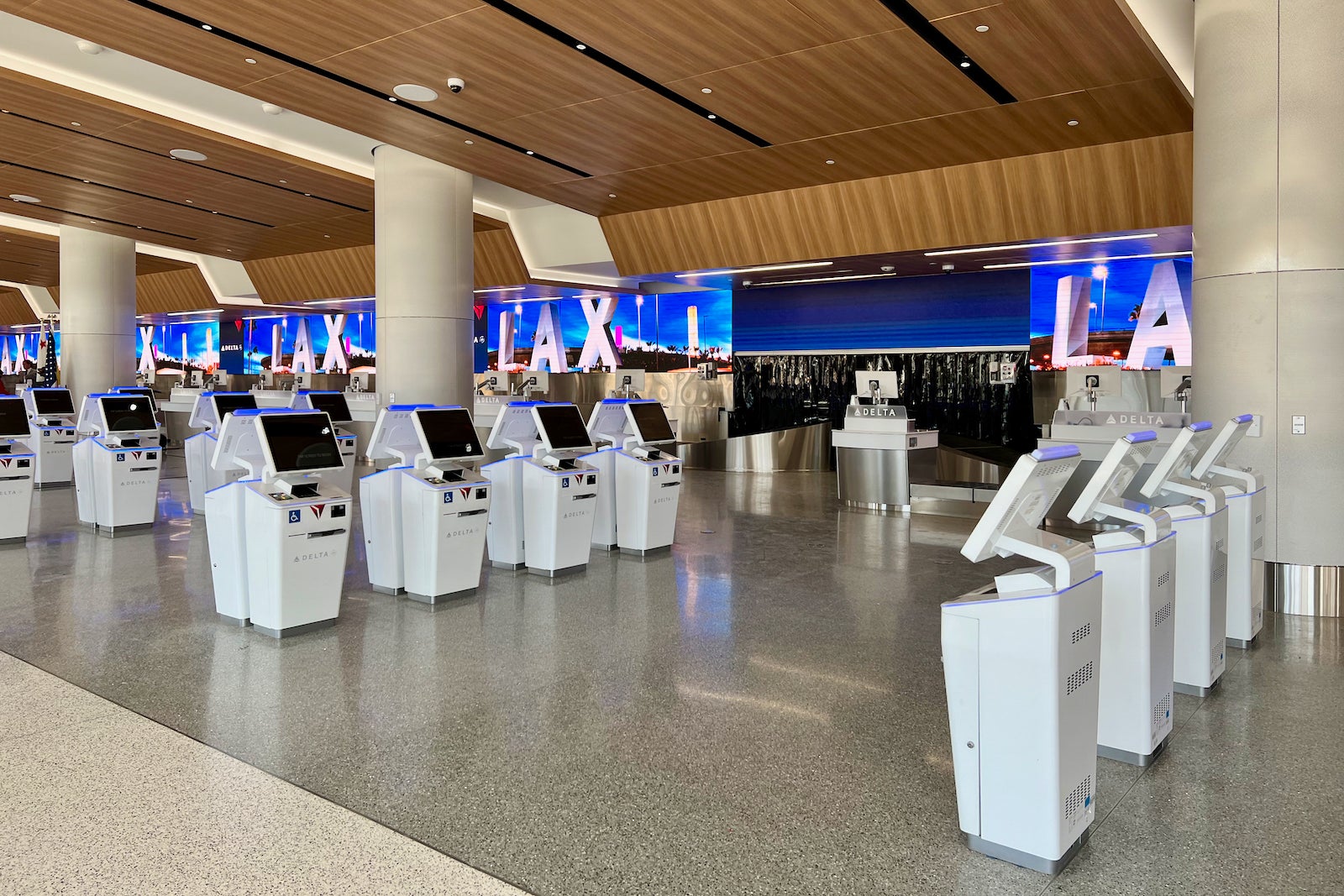 The pandemic might have temporarily brought the air travel industry to a halt, but there’s a big silver lining for travelers who are just now returning to the skies.

When it’s time to pass through the nation’s biggest hubs, you might not believe your eyes. The outdated airports of yesteryear are finally being rebuilt with modernized facilities that reflect the latest in design with a host of upgraded passenger amenities.

Of the nation’s busiest airports, Los Angeles International Airport (LAX) is getting perhaps the biggest upgrade.

LAX is undergoing a massive, $15 billion overhaul, with upgrades ranging from new terminals to a consolidated rental car center to an automated people mover.

Just last week, Delta, along with its partners at Los Angeles World Airports, the city agency charged with managing LAX (and nearby Van Nuys Airport), welcomed the first passengers into the new “Sky Way” terminal.

Other recent improvements include a new mid-field international concourse, an extended Terminal 1 and a new economy parking structure.

And this is only the first stage in a multi-year transformation program. Many more improvements are coming to LAX — and who better to give us the lowdown in an exclusive interview than the airport chief himself, LAWA CEO Justin Erbacci. Here are five things he told TPG that travelers should know:

The APM will ease traffic woes

Anyone who’s recently driven through LAX has likely stopped still in traffic.

With more vehicles than ever driving to the airport coupled with airport-wide construction projects, LAX’s roadways can get really backed up.

Erbacci is hopeful that will change with the new automated people mover (APM) that’s slated to open at the end of 2023.

The APM will connect three stations in the central terminal area with the new economy parking structure, a Metro station and the soon-to-open consolidated rental car center (which has space for over 18,000 cars).

Just last week, LAWA celebrated a major milestone in the landside redevelopment project — the last concrete for the APM was poured on April 20.

When it opens, the people mover will replace the rental car shuttle buses that currently make 3,200 daily trips on average around the airport’s roadways.

To alleviate congestion, these banned vehicles will instead pick up passengers at a new meet-and-greet area that’s being built on the ground floor of the economy parking structure.

It will take just four minutes from the APM stop to the central terminal area.

Erbacci thinks that the new meet-and-greet area also will become a popular spot for family and friends doing airport pickups and drop-offs. The curb will be just four minutes from the terminal by APM, and it's significantly more convenient for those driving on the 405.

“We’re going to be moving a lot of traffic,” Erbacci told TPG. “Much of the traffic that normally comes in here won't, and that'll just be a game-changer for accessing the airport roadways.”

In addition to the APM, Erbacci is excited about the upcoming launch of the second iteration of “FlyAway," a bus service that connects LAX with Van Nuys and Union Station.

“We're about to enter into a contract with a new bus provider, whereby we don't just offer point-to-point service with huge 50-foot buses… We're going to offer service with smaller buses on many different routes that will become more of a micro-transit type of solution," he said.

While much of the near-term focus is on improving landside access to LAX, the airport also continues to charge ahead with terminal redevelopment programs.

In addition to Delta’s ongoing work in Terminals 2 and 3, the airport is planning to build a new Concourse 0 and Terminal 9, in the northeast and southeast ends of the terminal area, respectively.

Concourse 0 will add nine new gates to the existing Terminal 1 and will include space for a new international arrivals facility.

Southwest is building the new concourse, Erbacci said, which means that “Southwest will get a first crack at some of the gates there.” However, the new gates are technically going to be considered "common use," so they won’t be used exclusively by Southwest.

Meanwhile, Terminal 9 will soon sprout out of the ground on the southeast end of the airside area.

This terminal will eventually become home to the Star Alliance airlines that serve LAX, including Air Canada, Lufthansa, Swiss and ANA, many of which currently operate from the Tom Bradley International Terminal (TBIT).

Construction hasn't yet begun on either terminal (the project just recently received environmental approval), but the hope is to have both areas open for the Olympics in 2028.

Going for gold even without the Olympics

Los Angeles will host the Summer Olympic Games in 2028, which are poised to bring a huge influx of visitors from around the world.

While some might assume that was the impetus to invest in the airport, Erbacci says that's not the case.

“If we didn't have the Olympics, our capital improvement program would not be any different than it is right now. We have to make this airport the world-class facility that this city deserves,” he said.

The landside access modernization and the new terminal developments are strictly about “making this airport better,” he said.

While the Olympics aren’t necessarily the reason for the investment, they are driving the timing, he said.

If all goes according to plan, most of the work will wrap up by the summer of 2028.

LAX is doing something that it’s never done before: The airport is wooing international airlines with financial incentives for inaugurating or resuming suspended flights.

To help drive a rebound in international traffic, LAWA recently put together a list of strategic routes and regions in which it wants to see new flights. This includes many currently unserved markets from LAX, including Puerto Rico, Jamaica and India.

If an airline launches a new route to one of the priority markets, LAWA will discount the landing fees and provide a marketing budget to jumpstart sales.

The incentive package isn't just designed to solicit new service — it's also trying to get carriers to resume suspended routes.

To date, many of the largest European, Asian and Middle Eastern carriers have restarted serving LAX, but some others are still missing, including Ethiopian’s service to Addis Ababa (via Dublin).

To explain why LAX is spending money to bring international carriers back to Southern California, Erbacci said that it’s about convincing the airlines that Los Angeles should return (or should be added) to the route map before another U.S. city, such as San Francisco or Dallas/Fort Worth.

“We want the airlines to choose LAX in the short term before some of the other domestic airports when they're making their determinations in where they're going to put their aircraft back,” he said.

Whether the incentives will work is anyone's guess, but Erbacci said that he's already received calls from interested airlines.

LAX is competitive … on purpose

The six largest carriers in the U.S. compete fiercely for the local market in Los Angeles. They all operate a hub or focus city at LAX, and there’s no sign of that changing.

“We actually have a concerted effort to make sure that there is no airline that has a dominant position here at this airport,” Erbacci said about this competitiveness.

“It allows us to have a broader range of opportunities here for passengers and people in this region,” he explained.

LAX is one of the largest origin and destination markets in the country, and Erbacci wants it to continue growing.

As the airport expands its destinations served, terminal amenities and landside facilities, travelers may soon once again enjoy passing through the nation’s fifth-busiest airport.

Our points-obsessed staff uses a plethora of credit cards on a daily basis. If anyone on our team wouldn’t recommend it to a friend or a family member, we wouldn’t recommend it on The Points Guy either. Our opinions are our own, and have not been reviewed, approved, or endorsed by our advertising partners.
See all best card offers
Related stories
Guide
Get more from your points with these transfer bonuses
Guide
Loyal to Costco and own a business? Costco Anywhere Visa Business Card review
News
American, JetBlue add 11 new routes as part of expanded Northeast Alliance
News
5 signs you have too many credit cards