What the new Midfield Satellite Concourse at LAX will look like

Articles
Marc Stewart is a journalist who's worked across the US, Central America, Europe and Asia. Most recently an anchor and reporter at the ABC affiliate in Denver, he’s now taking a quick break from the newsdesk, studying business and economic reporting at New York University.
Follow
Jan. 28, 2020
•
7 min read 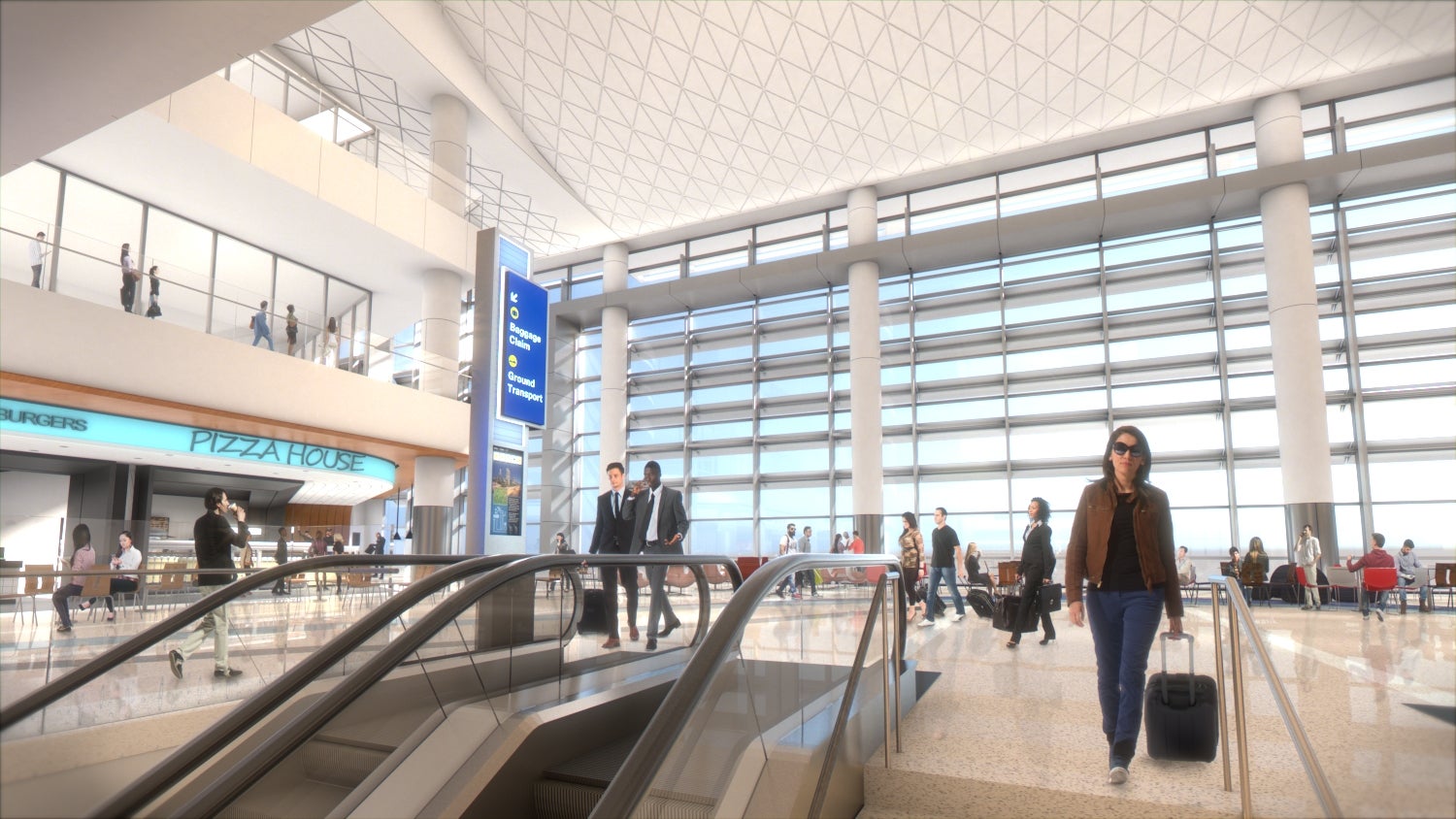 With demand for air travel expanding but airports facing limits to where they can physically grow, Los Angeles International Airport (LAX) is looking inward to improve its capacity and the passenger experience.

LAX is preparing to open a remote concourse located in the proximity of the current Tom Bradley International Terminal. With opening slated for this summer, passengers using the new Midfield Satellite Concourse will experience a shopping mall-like atmosphere, reminiscent of the city’s many neighborhoods. Airport officials say the new development will help LAX handle rising passenger traffic counts and reduce the need to transport passengers to outlying boarding areas.

It “allows the airlines to have more prompt operations,” said Justin Erbacci, interim CEO of Los Angeles World Airports, which manages the airport. “You can board a plane so much faster than you could if you had to put them in a bus and bring them out to a remote stand.”

The 750,000-square-foot Midfield Satellite Concourse is not directly connected to an established terminal. Instead, passengers will access it via an underground tunnel as opposed to traditional above-ground bridges and passageways. The concourse will initially include 12 gates, with the potential to include as many 15. It will be able to serve both single- and twin-aisle aircraft. Airline assignments are yet to be announced.

While the Tom Bradley International Terminal was renovated more than five years ago, space restrictions prompted the move to construct this revolutionary midfield facility.

Related reading: LAX counts down to midfield concourse opening in 2020

Passengers utilizing the new concourse will typically check in with their carrier in the ticketing lobby of the Tom Bradley International Terminal. Luggage drop off and retrieval will also occur at the TBIT.

Once past security, travelers will be directed via escalators or elevator to a tunnel connecting them to the new facility, 1,100 feet away. In addition to moving walkways, battery-operated vehicles will be available to transport passengers in need. A bus service also will operate connecting the Midfield Satellite Concourse to the other terminals at LAX. A separate tunnel will be used to move goods and supplies.

The passenger tunnel and Midfield Satellite Concourse will serve an extension of the overall oceanic and aquatic themes pervasive in the design of the Tom Bradley International Terminal. While the roof of the Bradley Terminal depicts a wave, the new concourse will be reminiscent of an ocean swell. The underpass will pay homage to the nearby water, complete with ambient lighting, blue lighting overhead and terrazzo lines. The tunnel will also include video panels and an audio system to play music or other recordings. The “concept was the waves cresting and breaking on the beach,” said David Kim, senior project manager, “so you have a somewhat of an under-the-water feel down below.”

After making the trek through the tunnel, passengers will be directed to a central hall. This main area will include large panoramic windows, multi-level overlooks of the main lobby and a tall ceiling, giving the complex an airy feel. Aviation enthusiasts will be able to catch views of the Bradley Terminal and the rest of the airfield upon entry into the centralized area.

The intention is for passengers to “absorb this natural light and feel better” as opposed to being in a “claustrophobic, dark dingy area,” said Kim.

Airline lounges will be located on the upper level of the new building. Plans are also underway to house a common use lounge, allowing passengers who don’t qualify for an air carrier lounge to pay for access to a similar facility.
The concourse will house 10 restrooms. In addition to a pet relief area, a quiet room and nursing rooms, the new complex will also feature an adult changing room, to help accommodate passengers with special needs and may be in a wheelchair.

The food, retail and other amenities inside the Midfield Satellite Concourse will feature a wide diversity of offerings. “This is going to be harmonious, kind of complementing what we do in the Tom Bradley International Terminal,” said Dan Hough, a vice-president with Unibail-Rodamco-Westfield, the company leasing food, beverage and retail outlets. “You will see ready-to-wear, the very latest cool trends, whether they’re from the garment district or whether they’re from Europe.”

The new concourse will house 27 food and retail tenants, part of 30,000 square feet of gross leasable area. It will be divided into three distinct sections, reflecting Los Angeles neighborhoods:

• Downtown Los Angeles: Inspired by the city skyline and high-rises. “You’ll see a lot of vertical steel and horizontal elements to it, that create a real kind of a downtown sensibility,” said Hough.
• Mid-City Neighborhood: This section will feature Art Deco from the 1940’s and 50’s.
• Ocean Communities: This is meant to evoke LA's beachfront communities.

Food and beverage offerings will encompass both name-brand and local offerings, from quick service to table dining. There will also be vegan and vegetarian offerings. Vendor names will be released at a later date. “I would say the shopping and the food part of it are going to be unique to Los Angeles in many ways,” said Hough. Celebrity chefs might be involved, though he did not say who.

Passengers can already browse and pre-order items, including food, online at LAX.

In addition to high-speed connectivity, the Midfield Satellite Concourse will feature biometric boarding for international departures. The technology is already being used in the Bradley Terminal.

Related reading: What you need to know about biometric privacy

The concourse will also feature a ramp control tower. It will help manage traffic on the apron near the new concourse as well as two taxiways that face obstructions from the current FAA control tower. The tower must be complete in order for operation-ins at the Midfield Satellite Concourse to begin.

In preparation for this summer’s anticipated opening, the airport will soon begin testing the facility to make sure signage and other systems are adequate and functioning properly. The airport is in the process of recruiting between 500 and 600 volunteers from community groups to participate in a “dry run” of the addition. Officials want to see what it’s like for a user to get to their gate, to the baggage collection area and then back to the central terminal. At this point, there are no opportunities for the general public to participate.

"If you look at the projections of the number of passengers that will be coming to Los Angeles over the next few years, you will see that there’s going to be continuous, excessive growth,” said Erbacci. “And so, we’re going to need all those gates."

“Obviously if they want to come to LA, we are the airport. But if they’re going to transfer through to/from Asia to the United States or to South America, then we need to show them that we have facilities that are top notch,” said Erbacci.