Articles
Ethan Klapper is a senior aviation reporter at TPG who focuses on the operational side of the airline industry.
Follow
February 21 2022
•
9 min read 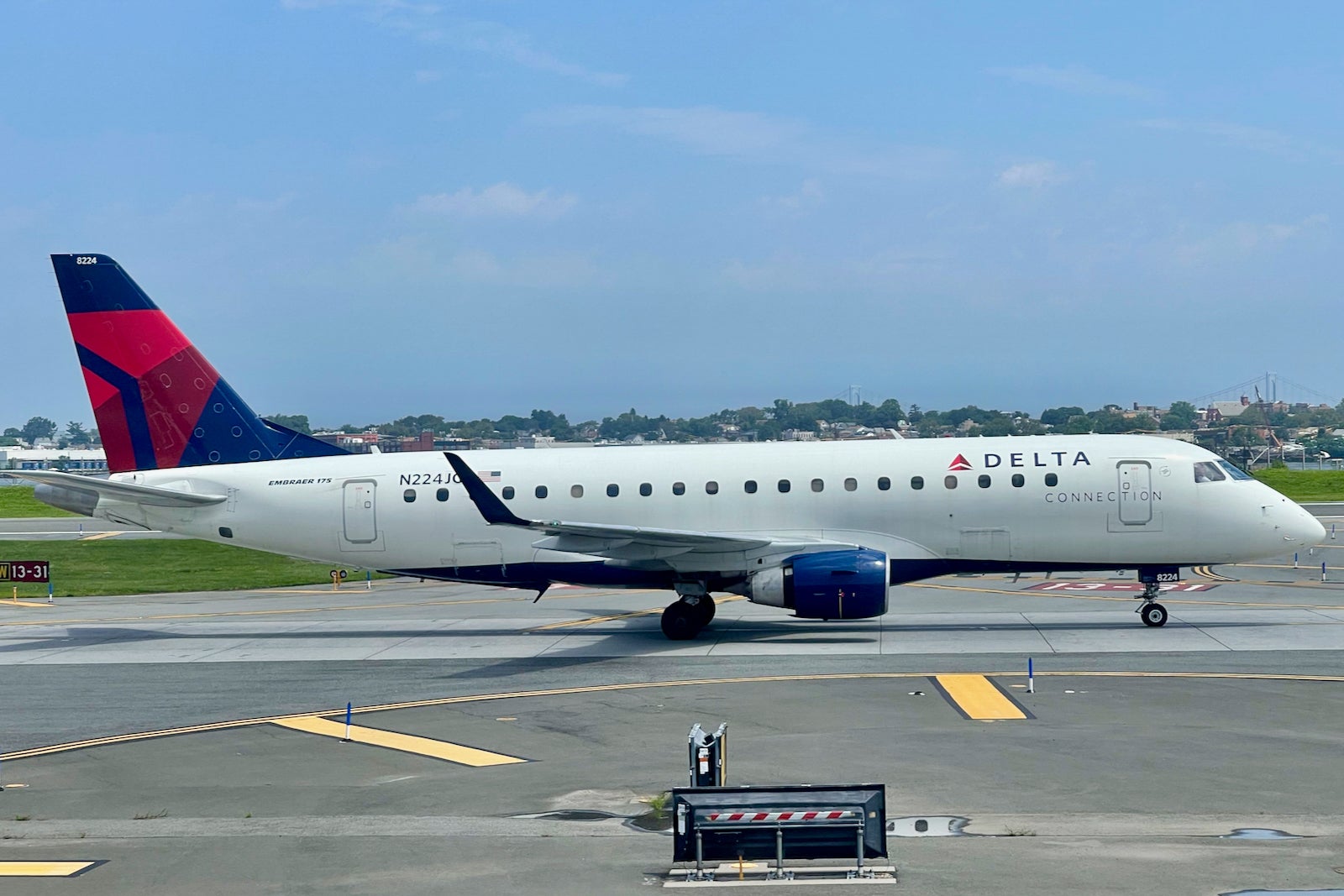 Small towns across America that are served by regional airlines are all seeing service cut completely or frequencies reduced. Facing a pilot shortage, many parts of the industry are contracting. For instance, GoJet, which operates as United Express, will see a 28.3% year-over-year capacity cut this May, according to Cirium. Horizon Air, which operates regional flights for Alaska Airlines, its owner, will see a 30.7% capacity cut compared to May 2021.

Despite a demand-driven increase in air travel as the U.S. emerges from the COVID-19 pandemic, some regional airlines are actually flying less than they did a year ago.

It's a bleak picture for small communities that rely on air service from regional carriers — and it will only get worse, said Faye Malarkey Black, the Regional Airline Association's CEO. The RAA is the regional airline industry's voice in Washington, D.C., advocating before Congress and the federal government on behalf of its 17 member airlines in the U.S. and Canada. Black joined the group in 1998 and has led it since 2015.

"Unfortunately, I think more loss is inevitable," she said in an interview with TPG. "I think no matter what we do right now, more communities are going to lose air service. The time to fix the pilot shortage was four or five years ago. At this point, we are trying to correct a problem."

To underscore her point, Black said that most of the nation's airports are served exclusively by regional airlines and that no one should expect mainline carriers to come in if regionals leave.

"Major airlines only serve directly 34% of the nation's commercially served airports," she said. "Everywhere else relies on a regional."

If regionals stop servicing an airport, it can significantly impact the number of flights available to travelers who frequent that airport.

Ultimately, the decision to pull out of an airport all comes down to the supply of pilots.

Regional airlines have long been an entry point into the airline industry for pilots, who then progress to the major airlines when there's demand there for more pilots. But early retirements at the major airlines during the early stages of the COVID-19 pandemic coupled with an estimated 13% of pilots who will hit the mandatory retirement of age 65 within the next five years has put this cycle "on steroids," Black said.

Related: How a pilot shortage could leave travelers with higher fares and fewer options

"So you have pressure at both ends where the recruitment is taking place from the pilot ranks of the regional airlines, and the number of pilots coming into the pilot pipeline are thinner than ever," she said.

At United Airlines and the other major carriers, new hire classes are taking place weekly. One recent United class saw as many as 72 prospective first officers, the airline's system chief pilot captain Mary Ann Schaffer told TPG last month. A sizable number of students in each class come from regional airlines, creating vacancies that are difficult to fill.

However, there may be at least one way to fix the problem.

Regional airlines can increase access to flight training through sponsorships like the ones offered in other Western countries, said Geoff Murray, a partner at Oliver Wyman and a former airline pilot who authored a much-cited study about the pilot shortage.

"Virtually every single western airline identifies their candidates out of high school ... or the equivalent to be sponsored into pilot training," Murray told TPG in an interview. "So, I think one of the first things we'll see happen is a level of sponsorship, and that sponsorship could be in the form of flat-out underwriting your training because you're going to come work in my airline. It could be in the form of income share agreements."

Murray considers United's Aviate Academy, a flight school that formally opened last month, to be a form of sponsorship that he sees as much more common in other Western countries that could work well in the U.S.

Even if other airlines open similar flight schools, though, there are additional issues to address.

It's a "perfect storm" for simulators, Murray said.

"So, I've got new hire training, No. 1, I got to get guys into the right seat," he said, referring to the side of the flight deck that first officers sit on. "And then the guys in the right seat when they get their thousand hours, they need to go over the left."

Black said that the increased number of training events also leads to increased demand for line check airmen — or pilots who help certify other pilots when they first learn a new aircraft or upgrade to the captain's seat. These are pilots who would otherwise be operating regular flights, so it further strains the supply of pilots, at least in the short term.

"You're going to take a pilot out of duty to become a line check airman," she said.

To minimize the impact to daily operations that comes from having pilots serving as line check airmen, regional airlines may need to take drastic steps to increase the number of pilots available to regional airlines.

In 10 years, the regional airline industry has gone through a remarkable amount of consolidation. In February 2012, there were 23 regional airlines operating for American Airlines, Alaska Airlines, Continental Airlines, Delta Air Lines, United and US Airways. By February 2022, the number of mainline carriers had shrunk thanks to a series of mergers – but the number of regionals serving these now-larger mainline companies has been cut in half. Coupled with a pilot shortage, it’s straining the regionals’ abilities to serve small communities.

Recently, there have been rumblings in the industry that further consolidation is necessary and possibly imminent in an effort to shore up certain regionals as a result of the pilot shortage. In an earlier interview with TPG, United CEO Scott Kirby did not rule it out.

"Possibly," he said, when asked if there was room for consolidation among United Express carriers, of which there are six, including three that fly exclusively for United. Kirby said in December that the airline has had to park 100 regional jets due to the pilot shortage.

Despite her industry largely being at the mercy of the mainline carriers and their leadership, Black said that she doesn't see any consolidation in the near future.

"I'm not aware of anything that's, that's kind of out there and I just don't see that trend of consolidation right now," she said.

So for now, it seems, training more pilots will remain the focus of addressing the pilot shortage. Quickly resolving unexpected disruptions to regional airlines, like the one that took place during the recent rollout of 5G C-band service, is vital to maintaining service to smaller communities, too.

During her interview with TPG, Black was perhaps most frustrated about the 5G situation, which she repeatedly called an "outrage." The process that certifies certain aircraft to operate in low visibility at certain airports, known as an alternative method of compliance (or AMOC), has left the regional airline industry behind, Black said.

"We've spent our career striving to make sure that we can bring the same level of reliable air service to everywhere in the country, and what we're left with is a scenario where AMOCs are achievable for larger aircraft and not achievable for almost half of the regional airline fleet is an acknowledgment that the people in smaller communities don't matter as much," she said. "That is the acknowledgment. And we are pushing back hard on that because our passengers do matter and they have just the same right."

Related: What you need to know about 5G interfering with aircraft

Regional airlines have been impacted the most since the service was activated on Jan. 19. At one point, an entire day of regional flights were canceled at Paine Field (PAE), north of Seattle, due to low visibility. There are no AMOCs currently available for the Embraer Regional Jet 135/140/145 fleet, which makes up a portion of United and American's regional fleet.

Black feels that the wireless industry needs to look to mitigations, like tilting antennas downward — a solution that has helped mitigate 5G-related concerns in other countries, particularly France.

"The Embraer product doesn't just operate in the United States," she said. "It takes off and lands in France, too. And the mitigations there work for all of the aircraft. They're not designed to just accommodate the large aircraft."

Black is leading a regional airline industry facing significant challenges. From a pilot shortage that is causing regional carriers to shrink in size and end service to small cities to delays at flight simulators to a chaotic 5G rollout, the regional airline industry is looking to her leadership to help bring growth again. But with major airline CEOs holding outsize influence over the industry, it might just ultimately be up to them.