Articles
Ethan Klapper is a senior aviation reporter at TPG who focuses on the operational side of the airline industry.
Follow
December 16 2021
•
9 min read 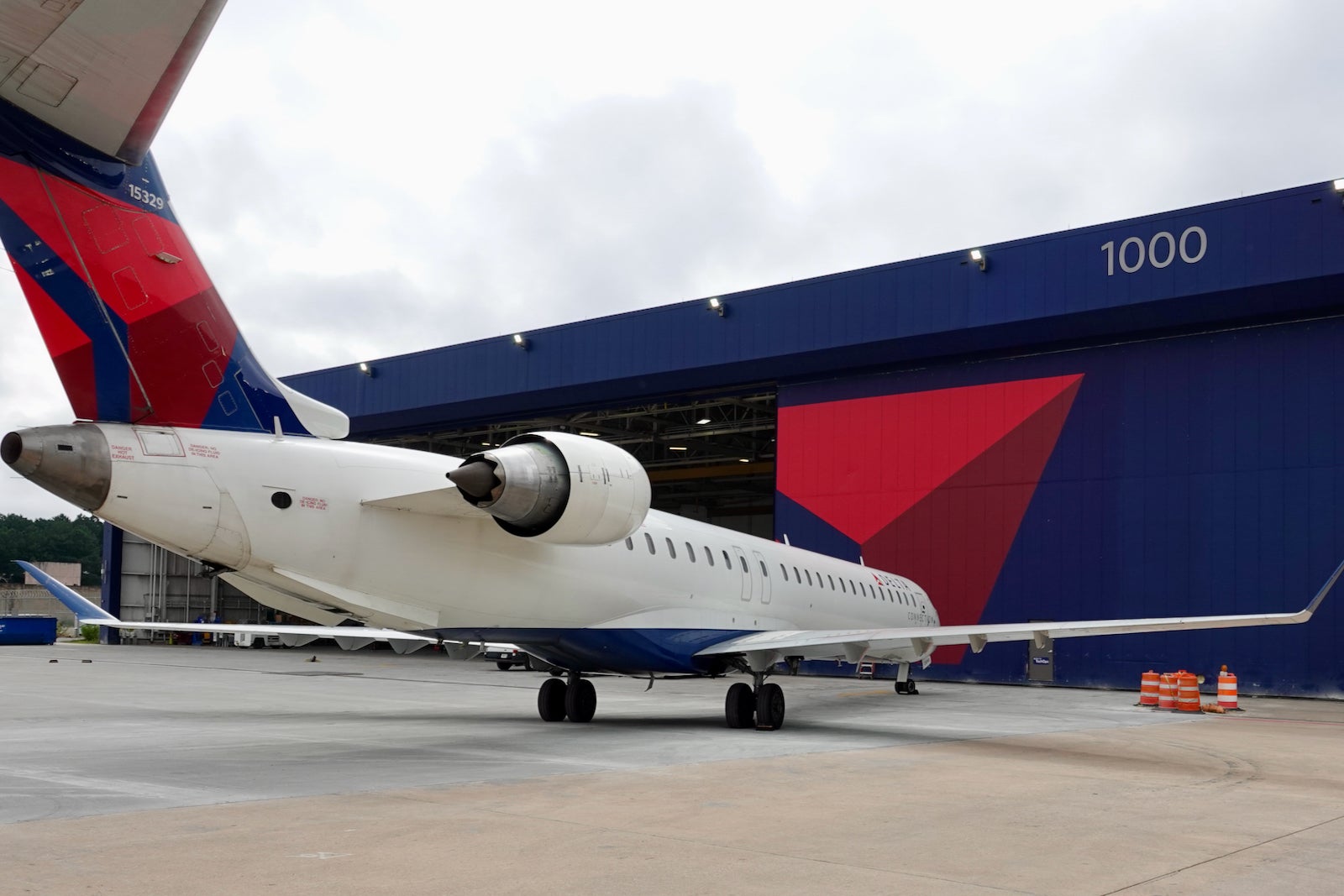 This nightmare scenario is becoming increasingly possible as the airline industry faces a pilot shortage in the coming years. The shortage, which is widely expected to be felt the most by the smaller regional airlines that operate on behalf of larger network carriers, could effectively force airlines to consolidate frequencies and cut cities altogether.

One projection shows a shortage of more than 12,000 pilots in the U.S. by the end of 2023. That study’s author, Geoff Murray, believes regional flying involving 50-seat Canadair Regional Jets and Embraer Regional Jets will be impacted first.

“Because of the shortage, the airlines — the regionals in particular — aren't going to be able to staff those 50-seaters,” Murray, a partner at Oliver Wyman and a former airline pilot, said in an interview with TPG.

Some effects of the shortage are already being felt. United Airlines recently announced it was ending service to about 10 smaller cities, declaring operations in those markets unsustainable with 50-seat regional jets.

“We don’t have enough pilots to fly all the airplanes,” United CEO Scott Kirby said at a Skift Forum in November. “So the 50-seaters are at the bottom of that pile, and markets that rely on 50-seaters are the ones that are going to lose service.”

Kirby told a Senate panel on Wednesday that United's regional partners have had to park nearly 100 regional jets due to the shortage.

The Regional Airline Association (RAA), the trade group representing regional airlines, agrees with this sentiment about how dire the situation is for local communities.

"To ensure small community air service, we need to quickly grow the supply of pilots while upholding the highest training standards," said Drew Jacoby Lemos, RAA's senior director of government affairs, in an email to TPG.

So how did we get here?

A tragedy — and action

Many in the industry point to a single accident that took place more than a decade ago as having an outsize impact on the supply of pilots.

On Feb. 12, 2009, Colgan Air Flight 3407 (operating as Continental Connection) crashed on approach to Buffalo Niagara International Airport (BUF), killing all 50 people on board the Bombardier Dash 8 Q400 and a person on the ground. In its investigation, the National Transportation Safety Board raised multiple training and professionalism issues with the crew.

The accident attracted a lot of attention and shed light on regional airlines. Congress ultimately enacted legislation that created several measures that increased regulation of the industry.

One of those measures is the requirement that airline pilots must have a type of license that has a prerequisite of 1,500 hours of flying time. Known in the industry as the 1,500-hour rule, it’s believed by many to be causing significant strain on the supply of pilots.

"We all know you can get a very qualified pilot in far less time than it takes today," said PSA Airlines president Dion Flannery at an RAA leadership conference in September. PSA is wholly owned by American Airlines Group and operates as American Eagle.

Lawmakers show no sign of revising the 1,500-hour rule, and some experts like Murray see an upside to it.

“The 1,500-hour rule does incentivize pilots to be instructors and to have new pilots, we need instructors,” Murray said.

Flight instructing is one of the most popular ways for pilots to do what’s known as “building time” — gaining enough flying hours to earn an airline transport pilot certificate, the type of license that enables pilots to fly larger aircraft. certificate. Other new pilots conduct aerial survey work for cartographers or fly corporate jets. Once a pilot earns a commercial pilot certificate, which requires a minimum of 250 hours of total flying time, they are free to earn money as a pilot, short of flying airline passengers in large aircraft. These tend to be low-paying jobs, sometimes to the point where aspiring airline pilots may choose different career paths.

Lemos, from the RAA, agrees with Murray about how important instructors are.

"Flight instructors are a critical component in today’s pilot pipeline, and many pilots build their hours by becoming flight instructors," he said. "Since the passage of the 1,500-hour rule, the regional airline industry’s focus has been on the quality of the training that pilots receive prior to joining a regional airline. As has been documented in numerous Pilot Source Studies, pilots who perform best and ultimately complete initial airline training at a regional airline come from a structured training background that utilizes R-ATP pathways. The focus should be on encouraging more individuals to pursue these training pathways."

R-ATP stands for restricted airline transport pilot certificate and provides a pathway to receiving certain ATP privileges before reaching 1,500 hours, depending on one's flying background. Pilots who attend certain two- or four-year university programs, or who come from a military background, are eligible for an R-ATP pathway.

At the onset of the COVID-19 pandemic in early 2020, the demand for flying plummeted. There was a surplus of pilots — one that, it turns out, would be temporary. But airlines, desperate to cut costs, offered early retirement packages to their most senior pilots — the ones who tend to command the highest salaries.

As the demand for flying rebounded, so did the demand for pilots. However, airlines found themselves with fewer pilots than they had before the pandemic.

At some airlines, “the early retirements represented as much as 15% of the pilot workforce,” Murray said.

As the major airlines began holding new hire classes again, they were recruiting heavily from the regional airlines.

“So now they're rolling, they've got to replace all these pilots that retired and they're going to hire out of the regionals,” Murray said.

Aside from the early retirements driven by COVID-19, as many as 27,000 pilots were set to retire over the next decade at Delta Air Lines, United Airlines and American Airlines, according to an estimate by Cowen analyst Helane Becker. In the U.S., airline pilots must retire at age 65.

A big reason why the supply of pilots is so constrained is because many people simply can’t afford to become a pilot.

Traditionally, many airline pilots came from the military, where pilots are trained for no charge as part of the job. But in recent years, the military has yielded fewer airline pilots than in the past. Therefore, it’s left to civilians to fill that need — and for civilians, flight training is expensive. By the time a civilian pilot goes from zero flight hours to an ATP certificate, costs can exceed $100,000. Despite some pay increases in recent years, many feel that regional airlines don't pay pilots enough.

For aspiring pilots, training is usually an out-of-pocket expense, with loans available to cover costs. In recent years, United, American, Delta, JetBlue, Southwest and regional Republic Airways have all started cadet programs in an attempt to firm up the pilot pipeline.

Murray believes that airlines and other organizations will step up and start to sponsor more flight training to increase the supply of pilots, especially aspiring pilots who would not be able to afford flight training otherwise.

“What I suspect to happen is we will see sponsorship programs emerge, and those sponsorship programs will be geared toward students who otherwise couldn't finance their own [training], or ... their parents couldn't finance training,” he said. “They couldn't get financing for their training, but yet they're capable. They're intelligent, they're perseverant. They have the aptitude to get through training.”

At United’s Aviate Academy near Phoenix, which welcomed its first class on Dec. 6, the airline and JPMorgan Chase & Co. have each contributed $1.2 million in scholarships. Nonprofits such as the Latino Pilots Association and the Organization of Black Aerospace Professionals are also offering scholarships.

For those who can afford flight training, they’re entering a lucrative job market.

Joel Shkedy quit his job working in operations at an airport in New York to train full time after saving up — and just earned his private pilot license. From Shkedy’s perspective, it’s not a question of if he gets a job, but when ... and who hires him.

“I have zero doubt in my mind that, you know, within two years from right now, I will be flying some form of transport category airplane,” he told TPG in an interview.

Airlines are working hard to entice prospective pilots like Shkedy. For example, the three regional airlines wholly owned by American Airlines are offering new bonuses of $187,500 on top of regular salaries, paid out in stages that culminates in getting flowed through (hired) by mainline American. Many airlines are offering signing bonuses closer to $50,000, which are often more than a first-year first officer makes. These massive hiring bonuses underscore the challenges that the industry, especially regional airlines, has in hiring new pilots.

As the industry emerges from its biggest crisis in history, it confronts another issue. While the pilot shortage is slower moving, the effects are already being seen, and more smaller cities could be on the chopping block.

For now, airlines are turning to a new set of recruitment tools to address this problem. Whether it will work remains to be seen.