Articles
Darren Murph holds a Guinness World Record as the planet's most prolific professional blogger. He's an explorer at heart, having traversed nearly 50 countries and all 50 US states. He's flown over one million miles on Delta alone, and serves as a senior writer at TPG.
Follow
Feb. 15, 2019
•
7 min read 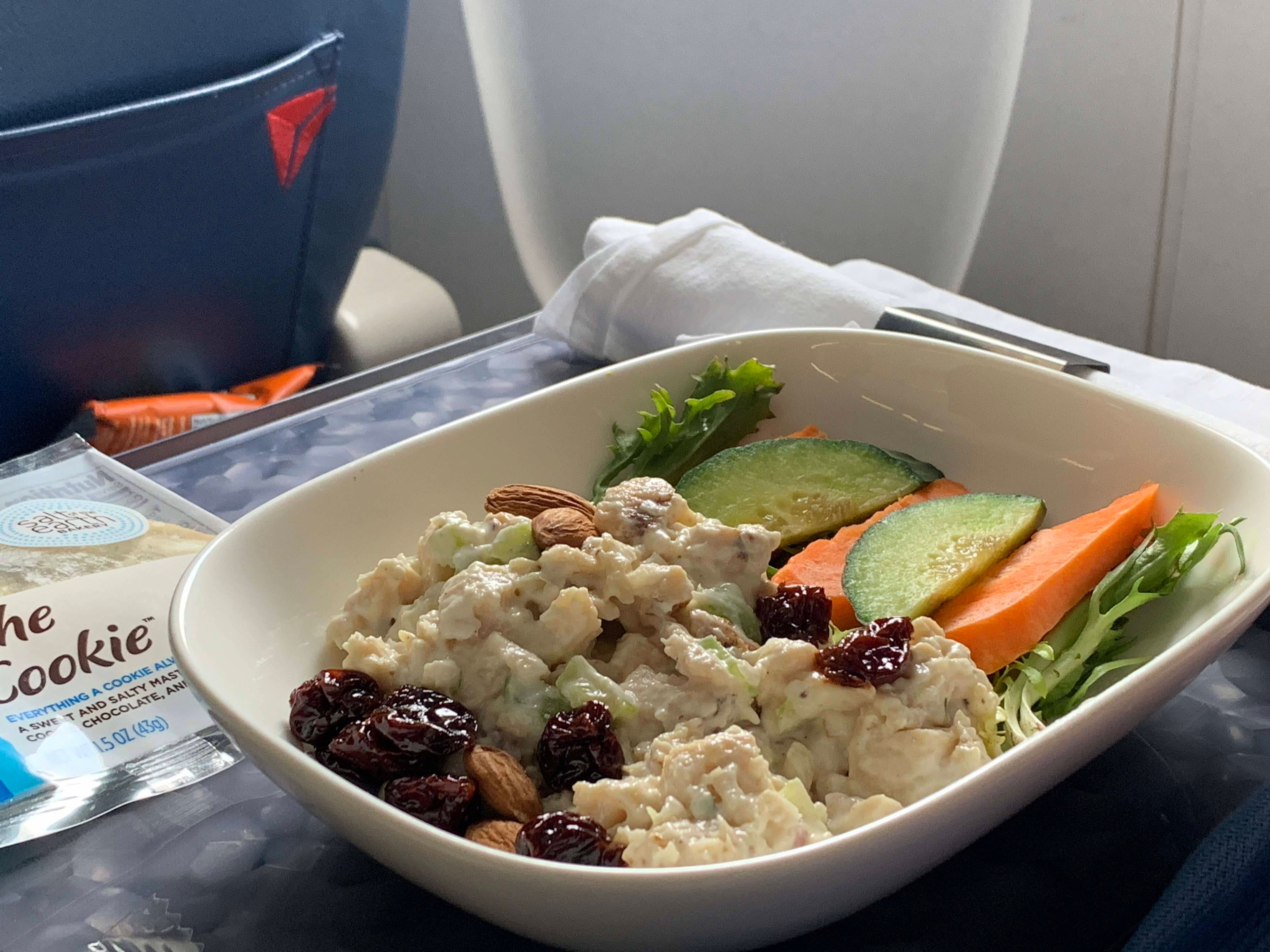 This week, Delta expanded its pre-select meal program in a huge way. While first limited to international Delta One flights, the program expanded to domestic Delta One flights in December 2018. Now, it's gone whole hog: as long as you’re booked in First Class on a mainline Delta flight with meal service (flights more than 900 miles), you’re eligible to participate.

The expansion brings the number of daily Delta flights eligible for pre-select from 200 to more than 1,000. Customers confirmed in the First Class cabin in eligible pre-select markets will see an email from Delta three days prior to their flight asking them to pick their first choice meal. All that's needed to participate is a valid email address listed in the customer's SkyMiles account or in their passenger record.

It's worth noting that this is separate from the airline's "Special Meals" program, which allows for gluten-free, vegetarian, kosher, bland, etc. meal selections for those with dietary restrictions/preferences.

While the likes of Qatar Airways and Singapore Airlines have offered premium cabin clients the ability to peruse menus and select delicacies prior to departure, Delta’s program is relatively new. American Airlines also rolled out a food pre-ordering system this summer for economy passengers on select routes. And more recently, American partnered with Zoës Kitchen to stock fresh sandwiches, wraps and snacks.

It’s also worth noting that with AA’s pre-order system, you can select meals up to 30 days before your flight, with the cut-off being 24 hours prior to departure. United, meanwhile, doesn’t offer pre-select for any flight (excepting those to/from Japan, where you can pre-select the Japanese meal option) beyond the usual special meals for those with food allergies and intolerances.

A perk for flyers, efficiencies for Delta

Delta, which has been doubling-down on collecting and using data to make the flying experience more personal, no doubt sees this as a way to increase efficiencies. For starters, a cabin full of passengers who have already selected their meal will be more at ease — no more fretting about whether or not Delta will run out of your preferred meal before the flight attendant gets to you.

To boot, this is one less thing the flight crew has to ask, freeing them (as well as passengers) up. In addition, pre-select "helps the airline better understand customer preferences, which informs future culinary offerings." It also cuts down on waste, which is good for Delta's wallet (and in theory your wallet as well) and the environment.

I was able to participate on two pre-select meal flights during the initial week of expanding beyond Delta One flights. While the announcement was made on Feb. 4, 2019, I did not receive an email to pre-select my meal for a mainline first class Delta flight between Minneapolis–St. Paul (MSP) and New York's LaGuardia (LGA) on Feb. 6, 2019.

I did, however, receive an email on Feb. 4, 2019, to pre-select a dinner meal for an upcoming first class flight aboard Delta's inaugural A220 launch between Dallas–Ft. Worth (DFW) and New York's LaGuardia (LGA). This was a paid first class ticket that I purchased in October 2018.

I also received an email on Feb. 5, 2019, to pre-select a breakfast meal for an upcoming first class flight between New York's LaGuardia (LGA) and Minneapolis–St. Paul (MSP) on Feb. 8, 2019. This was a coach ticket that was upgraded within the five-day window as a perk for Diamond Medallion members.

Feb. 7, the day of the inaugural A220 flights (which I reviewed here), happened to be the very first day that Delta enabled pre-select first class meals for non-Delta One flights, according to our flight crew. I'd selected a grilled chicken salad three days prior after receiving an email from Delta asking me to make a selection.

Nevertheless, I was asked to pick between two meal options — my pre-select option hadn't been recorded. Thankfully, the grilled chicken salad was still in stock, so all was well. I inquired with our lead flight attendant, and he noted that while pre-select meal choices were given to him on his paperwork for his outbound LGA–DFW flight on Feb. 7, selections weren't provided for the DFW–LGA return. I'm chalking it up to Day One hiccups.

A day later, aboard an Airbus A320 from LGA to MSP, flight attendants confirmed that all pre-select choices were recorded and given to them prior to our 6am departure. That included my choice — I opted for cereal over the breakfast sandwich. Funny enough, the flight attendants noted that they still needed to ask and confirm choices with passengers, as several were either too tired or too full from their Sky Club visit to want the meal they selected.

One other element of this program worth mentioning: I feel that this is a subtle way to push ever more people to buy into first class, either during the initial ticketing process or via cash/miles down the line. It's yet another perk to holding a first class ticket well in advance of departure, and it's definitely something that gate upgraders will miss out on.

I wouldn't be surprised to see the ability to pre-select one's meal listed as a bullet point to encourage people to upgrade to first class when presented with buy-up offers on Delta.com and within the Fly Delta app.

During a recent investor day in New York City, Delta Air Lines President Glen Hauenstein confessed that the airline now sells 60% of its first-class seats, compared with just 13% a few years prior. The airline made clear several years ago that it would trigger alluring buy-up offers to Main Cabin and Comfort+ passengers in order to sell more tickets in the forward cabin. And, in turn, give away less of those seats via upgrades. Today, the economy cabin generates less than half of Delta’s revenue (48%), compared to 63% six years ago.

Delta would love nothing more than to completely sell out its forward cabins, and while the ability to pre-select one's meal won't accomplish that on its own, it's yet another reason for the "Want First? Buy First!" crowd to nod in satisfaction.