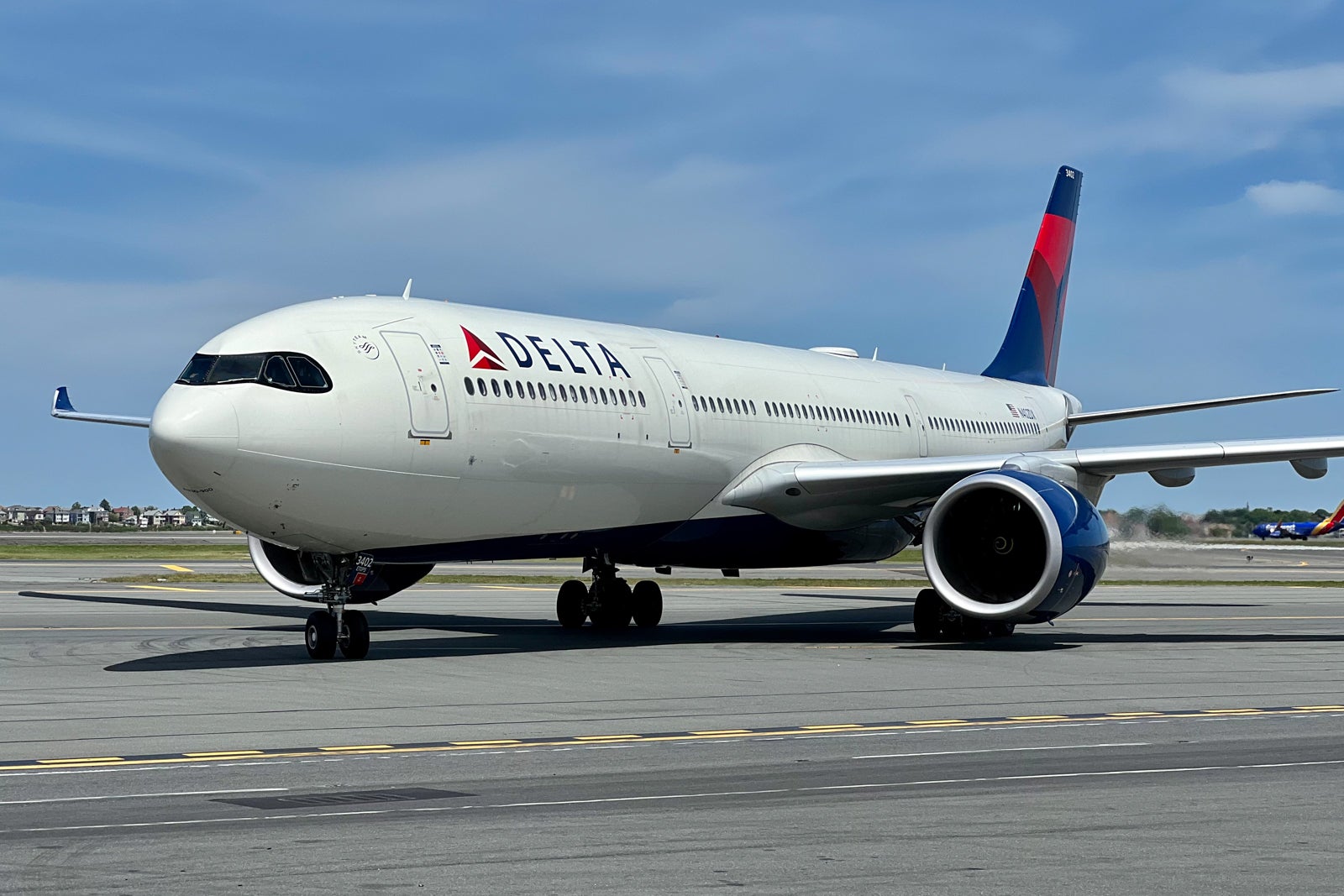 Delta Air Lines is adding some exciting new pins and lines to its route map.

This is perhaps the most exciting network news from Delta since the pandemic began, so be sure to catch all the details below.

All the new flights will load to Delta's schedule on Saturday, July 30. As such, fares and SkyMiles redemptions aren't currently available, but we'll follow up with that information when it's available.

Delta will become the third U.S.-based carrier to fly to Tahiti beginning later this year.

The airline will add the Faa'a International Airport (PPT) in Papeete, French Polynesia, to its route map on Dec. 17 with new three-times-weekly service from the Los Angeles (LAX) hub.

Delta will deploy a Boeing 767-300ER on the route, which will operate on Tuesdays, Thursdays and Saturdays. It wasn't immediately clear if the airline would fly one of the newly retrofitted 767-300s that feature a premium economy cabin, but we'll update this post when we learn more.

Of all the new routes, this one is perhaps the most exciting. Of course, Tahiti is a dream destination for many travelers, and additional access from the U.S. gives travelers more options to get there.

United Airlines is currently the only U.S. carrier to serve Papeete from the mainland, with nonstop service from San Francisco (SFO). When United launched its route in October 2018, it began as three-times-weekly service. The airline has since upgraded the route to five weekly flights, citing strong demand. (Hawaiian Airlines is the other U.S. carrier serving Tahiti, but it flies from Honolulu.)

Other than United, Air Tahiti Nui (the flag carrier of French Polynesia), Air France and French Bee (a French ultra-low-cost carrier) all serve Papeete from the U.S. mainland. The former two carriers fly from Los Angeles (LAX) and the latter flies from San Francisco (SFO).

Air France operates the LAX to PPT route as part of a journey from Paris. The plane flies from Paris to Los Angeles and then continues on to Tahiti — passengers can book either the first, second or entire journey on one ticket.

Interestingly, Delta and Air France are close partners. They are both founding members of the SkyTeam alliance and have a transatlantic joint venture partnership.

The two carriers will overlap with service to Tahiti on Tuesdays, Thursdays and Saturdays, so there'll be plenty of SkyTeam connectivity to the islands on those days.

Papeete is the main international gateway to French Polynesia. From there, passengers can continue on to other nearby destinations, including Moorea and Bora Bora, both just a few miles from PPT.

The only question now is how many SkyMiles will Delta charge for a business-class flight to Tahiti?

This one should come as no surprise, but the airline is officially putting its new Cape Town flights on sale.

The airline will commence operations between Atlanta (ATL) and Cape Town (CPT) on Dec. 17 with three-times-weekly service. The carrier will deploy the Airbus A350 on the route, which will operate on Mondays, Thursdays and Saturdays.

The A350 that Delta will deploy will feature 32 private Delta One Suites, 48 Premium Select recliners, 36 extra-legroom Comfort+ seats and 190 standard main cabin seats.

For Delta, adding Cape Town to its network has been a long time coming. Early in the pandemic, the carrier unveiled plans to connect the city with a triangle route that would tag onto the airline's existing nonstop service to Johannesburg (JNB).

That way, the airline could efficiently use the Airbus A350 aircraft on the route without any restrictions on payload due to the high elevation of the JNB airport. The stop in Cape Town would've allowed for refueling at sea level before beginning the 8,130-mile trek back to the U.S.

In addition to Delta's proposed triangle route, the airline also sought permission to launch a nonstop flight to Cape Town from Atlanta.

That plan faced competitive pressure from United, which had also filed for permission to launch a new three-times-weekly nonstop from its Washington/Dulles (IAD) hub. At the time, there were only four “slots” left to serve South Africa from the U.S. under the bilateral air service agreement between the two countries.

So, the Department of Transportation then needed to decide which carrier would win those four slots.

Ultimately, the DOT found a solution that worked for both airlines: it worked with the South African authorities to secure two additional slots, and now both Delta and United can launch their proposed nonstops to Cape Town.

Delta Air Lines is going all-in on Israel, with a third route to the country launching next year. Delta will add three-times-weekly service from Atlanta (ATL) to Tel Aviv (TLV) on May 10, 2023.

The carrier will deploy its flagship Airbus A350 on the route, which features all four of Delta's signature cabins. The airline will fly the route on Wednesdays, Fridays and Sundays.

The new Atlanta flight will join the carrier's existing service to Israel from New York-JFK, as well as a recently launched Boston (BOS) route.

Interestingly, the airline last flew the 6,437-mile route from Atlanta between March 2006 and August 2011, before ending it and consolidating Tel Aviv flights to New York, according to Cirium schedules.

While the route technically marks a resumption for Delta, it comes as Israel has become a very competitive market for U.S. airlines. During the pandemic, American Airlines launched new flights there from New York-JFK and Miami. In fact, the route from South Florida will soon be upgraded to daily service.

United Airlines flies to Tel Aviv from four of its hubs (Chicago, Newark, San Francisco and Washington/Dulles), offering plenty of one-stop options for flyers headed to Israel from anywhere around the country.

As such, Delta will face plenty of competition for flyers headed to Israel, but the airline is likely banking on the connectivity options from its mega-hub in Atlanta to help boost the route's prospects of success.

Even though it's "just" a domestic route, Delta's new Miami (MIA) to Los Angeles (LAX) service is an interesting one.

For one, it technically marks a resumption for the carrier, as the airline last operated the route in August 2018, according to Cirium schedules.

But, this time around, the carrier is boosting its offerings with twice-daily flights launching on Dec. 17. Back in 2018, the carrier flew a less-than-daily summer seasonal schedule.

The airline will deploy a Boeing 737-900ER on the new transcontinental route, which features 20 first-class recliners, 21 extra-legroom Comfort+ seats and 139 standard economy seats.

Perhaps more interestingly, the new flights will go head-to-head against American Airlines and JetBlue Airways, both of which already operate the route with multiple daily frequencies.

The difference, however, is that Delta won't offer any premium lie-flat seats on the new transcon route, whereas each JetBlue flight offers a Mint business-class product and some American frequencies are operated by wide-body jets with lie-flats.

For Delta, growth in Miami has been teased for a while.

In September 2019, Delta took a 20% stake in LATAM, wooing the carrier away from the Oneworld alliance and its former partner, American Airlines. Delta then unveiled plans to create a pan-American partnership with LATAM a few months later by creating a new “gateway hub” in Miami.

Delta previously shared that it wanted to add at least 20 new U.S. domestic departures under its proposed joint venture with LATAM.

Now, the Department of Transportation tentatively cleared the proposed joint venture last month, paving the way for the deal to proceed. While we're still waiting on more details on the execution of the tie-up, Delta is moving forward with growth in Miami.