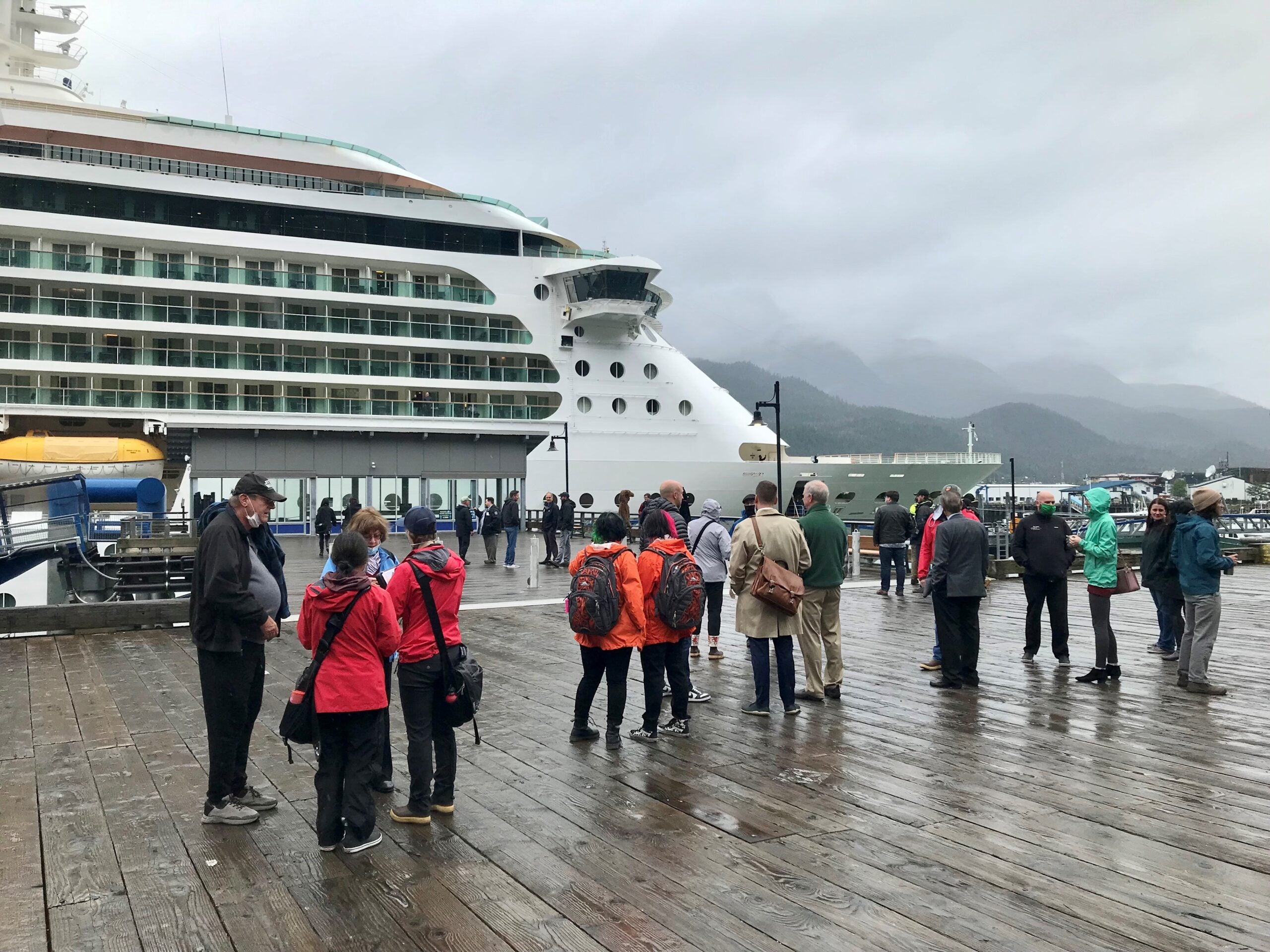 Why visiting Alaska's busiest cruise port, Juneau, is a bit surreal right now
This post contains references to products from one or more of our advertisers. We may receive compensation when you click on links to those products. Terms apply to the offers listed on this page. For an explanation of our Advertising Policy, visit this page.

The whale-watching tours were running. So were the helicopter rides to the Juneau Glacier. And the shops along South Franklin Street were, for the most part, open.

For tourists arriving in Juneau, Alaska, on Friday on the first big cruise ship to sail to Alaska in nearly two years, it was pretty much business as usual when it came to the array of options available for touring, shopping and entertainment.

There was just one big difference: There was a rarely seen, almost blissful lack of crowds.

As I saw first-hand Friday after arriving in Juneau on that first vessel back -- Royal Caribbean's Serenade of the Seas -- the most-visited of Alaskan cruise ports has the wide-open feel of a seasonal tourist town in the weeks before its high season begins. Never mind that July normally is the highest of the high season for Juneau. And it's expected to stay this way for the rest of the summer.

If this was a typical July, Juneau would be packed with as many as 14,000 cruisers a day streaming off as many as five or even six large cruise ships.

But as Liz Perry, the CEO of the town's tourism office, Travel Juneau, noted on Friday morning, Juneau is expecting at most about 3,500 to 5,000 cruisers from a maximum of two ships on any single day in the coming months. And even levels that high will be relatively rare. On many days, the cruise visitor numbers will be far below that.

Visitors "are going to experience a Juneau that is much less crowded than they would have seen in, say, 2019 or 2018," Perry said during a chat along Juneau's city dock, where she and other tourism leaders were bubbling with excitement as they braved a light drizzle to greet arriving Serenade of the Seas passengers.

"That gives them an even greater opportunity to spread out through town," Perry said.

Keeping tourist numbers down in Juneau this summer will be the fact that some cruise lines only are operating ships right now at partial capacity.

Serenade of the Seas, for instance, can carry up to 2,476 passengers with every berth filled. But this week, it's only sailing with 632 passengers.

As someone who has visited Juneau many times over the years while writing about the destination -- for about a decade, I co-wrote the Frommer's Alaska cruise guide -- I will tell you that the resulting emptiness of the town on Friday was like nothing I have ever seen. It was surreal, really.

Wandering over to Tracy's King Crab Shack, which can be packed with lines out the door when a few cruise ships are in town, I was able to walk right in and place an order. It wasn't completely empty. In fact, quite a few tables were filled with my fellow Serenade of the Seas passengers cracking open fresh-steamed Alaska king crab and washing it down with a locally brewed Alaskan Amber. But I had no trouble finding a seat.

Looking over to the nearby Mt. Roberts Tram, which whisks visitors to the top of the mountain looming behind town for a spectacular scenic overlook and hiking trails, I noticed that the tram cars were departing with just a handful of people at a time. Some cars were completely empty. There were no lines to get on board.

Down on South Franklin Street, the sidewalks were mostly empty, with small clusters of cruisers meandering from shop to shop.

"It's a once-in-a lifetime-chance to experience Alaska in this way," said Laura Martinson, one of the shop owners along the street and a local Juneau resident.

Martinson's store, Caribou Crossings, which specializes in jewelry, home items, sculptures and other art made by local Alaskan artists, was one of the busier shops in downtown Juneau on Friday. But it wasn't packed like it normally would be.

"It's devastating for the businesses, but for the visitors, it's incredible," Martinson said of the lack of crowds in Juneau right now. "You get to get that shot of yourself at the glacier with no one in the background, or you're the only one on the tram. You'll only ever see it this way right now."

The return of Serenade of the Seas on Friday -- and the coming arrival of other cruise ships that are restarting Alaska cruises in the coming days -- is a lifeline for Juneau, a town of just 33,000 people that has been struggling mightily since COVID-19 brought tourism to a halt.

Juneau's economy isn't entirely reliant on tourism. The town is the Alaska state capital, with many jobs tied to that, and also a hub for the Southeast Alaska fishing industry. But tourism plays an outsized role in Juneau's economy.

Many local residents have jobs tied in some way to tourism, and the sales taxes and "head tax" fees brought in from tourist arrivals and spending pays for everything from the city's fire department to police service and schools.

In a normal year, cruise ships bring the vast majority of visitors to Juneau -- about 94%, according to Travel Juneau. And until Friday, there hadn't been a big cruise ship in town since September of 2019, at the very end of the 2019 cruise season.

Royal Caribbean and other major cruise lines that regularly operate sailings to Alaska during summers halted such trips for all of 2020 due to the COVID-19 pandemic and -- until recently -- looked likely to skip Alaska again for all of 2021 due to a regulatory issue. Only a last-minute legislative fix to the regulatory issue, which was precipitated by the closure of nearby Canadian ports to cruise ships, has allowed for cruising to resume.

Still, the ramp-up of cruising to Alaska this summer will be slow, with just a handful of vessels returning to the "last frontier" state. In all, Juneau is expecting about 7% of the cruise visitors this summer that it normally gets in a year.

"We're still barely hanging on," Martinson, the shopkeeper, said. "Southeast Alaska is still the most economically affected region in the country [from COVID-19] because we're so remote, and we rely so much on these cruise ships."

Martinson said Juneau wouldn't really rebound from the devastation of the COVID-19 tourism halt until 2022. But to see a ship pulling into Juneau on Friday was a thrill, It meant that "we're one step closer."

Martinson said she was in tears on Friday morning when a local news outlet came to interview her soon after the first cruisers arrived. She hadn't realized how much she missed seeing the visitors who come into her shop -- people who in some cases had waited their whole lives to see Alaska.

"We get to see everybody on their best day ... their minds are blown (by Alaska), and that kind of energy, I don't think I realized how much I missed it until it started coming back," she said.

Featured image by Serenade of the Seas in Juneau, Alaska. (Photo by Gene Sloan/The Points Guy)
Editorial disclaimer: Opinions expressed here are the author’s alone, not those of any bank, credit card issuer, airline or hotel chain, and have not been reviewed, approved or otherwise endorsed by any of these entities.