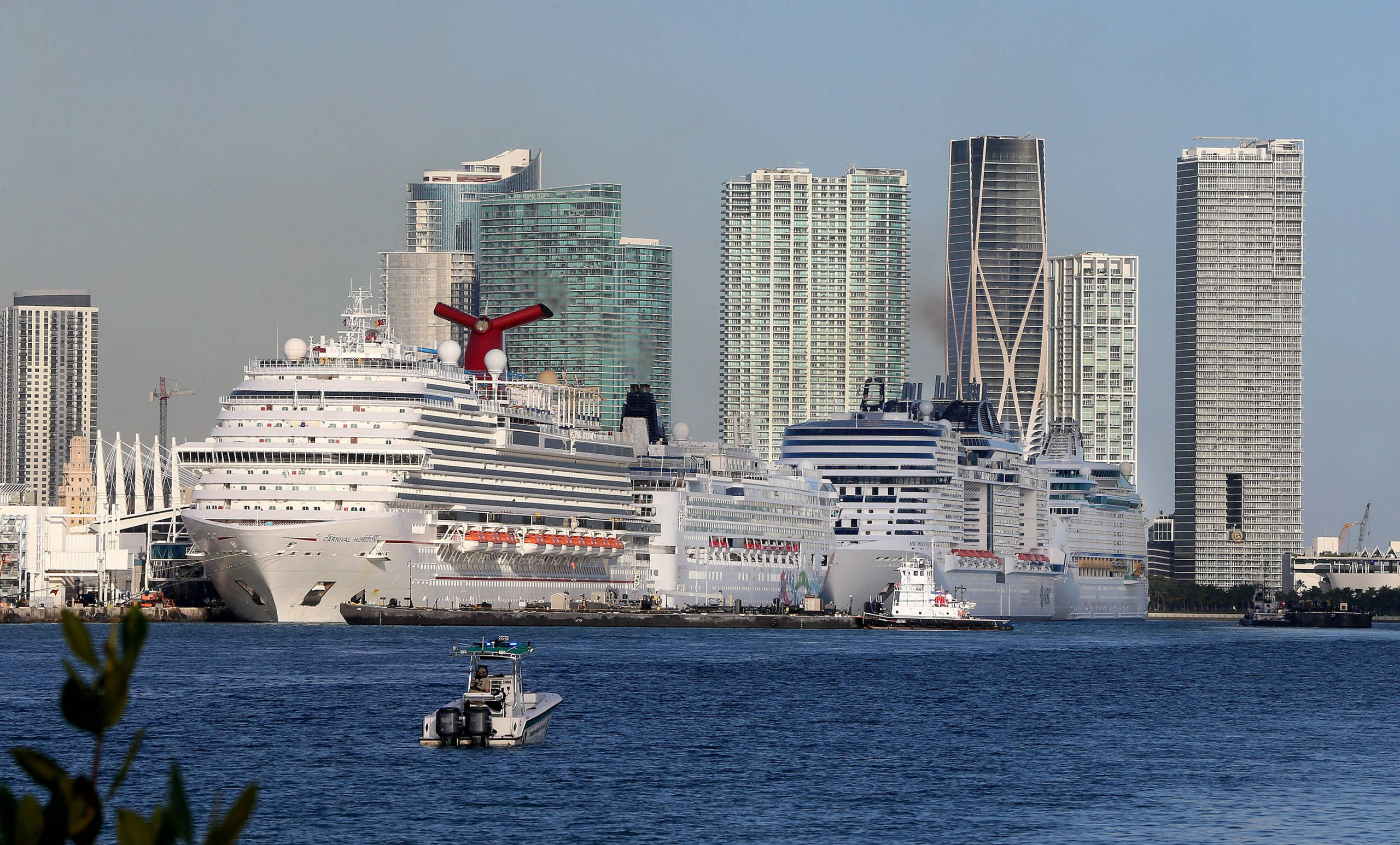 Coronavirus forces cruise ships to drop anchor in surprising places around the world
This post contains references to products from one or more of our advertisers. We may receive compensation when you click on links to those products. Terms apply to the offers listed on this page. For an explanation of our Advertising Policy, visit this page.

It isn't every day you see a Norwegian Cruise Line vessel pulling into Jacksonville, Florida. Or even every year.

But that was the unusual sight on display for residents on Sunday. The 2,002-passenger Norwegian Sky sailed past Jacksonville's Fort Caroline on its way to the city's Talleyrand Marine Terminal. The ship was arriving empty, displaced from its normal home in Miami due to a shortage of berthing locations as cruise lines suspend operations out of the world's largest cruise hub.

Two more Miami-based Norwegian vessels -- Norwegian Pearl and Norwegian Gem -- are likely on the way to Jacksonville, too. Normally, the city is home to just one cruise vessel, the 2,056-passenger Carnival Ecstasy. That ship already is tied up in Jacksonville.

Jacksonville isn't the only port city seeing a sudden influx of cruise vessels. The suspension of cruise operations around the globe due to the outbreak of the new coronavirus has set off a scramble among cruise lines to find places to park all their ships.

Cruise giant Carnival -- the world's biggest cruise line by number of vessels -- has sent two of its Florida-based ships to Freeport in the Bahamas. Two more Carnival vessels that normally are based in New Orleans and Galveston, Texas, will be spending the coming weeks tied up in Gulfport, Mississippi.

One Miami-based Carnival ship, the 2,056-passenger Carnival Sensation, arrived in the city on Saturday to unload passengers and then returned to sea on Sunday to make room for other vessels. It returned to Miami on Monday.

Other ships are docking or anchoring at the private islands owned by their parent companies.

Related: Some ships stranded at sea as ports shut down due to coronavirus

"Given that there isn't enough space in some ports for all of the ships, we're docking them at other ports during our voluntary pause in operations," said Carnival spokesperson Vance Gulliksen. "We're using a combination of ports in the U.S. and Bahamas as well as anchoring some ships at sea."

Speaking with The Points Guy, Gulliksen had praise for the way ports were stepping up to help the cruise industry.

"We wish to thank our port partners for their support and assistance during this unprecedented time of challenge in our industry," he said.

Where ships are ending up

But in the busiest cruise hubs, such as PortMiami and Fort Lauderdale's Port Everglades, there simply isn't room for every vessel that needs to dock.

The situation is playing out on a day-by-day basis as ships trickle back into such hubs as PortMiami to unload passengers who were on board when lines began announcing temporary shutdowns. Often, the vessels can't stay long. They must head back out to sea to make room for other arriving ships.

As of this weekend, there still were 40 cruise ships that operate out of U.S. ports still at sea, according to the Cruise Lines International Association (CLIA), the main trade group for the cruise industry. Of those, 11 were due to return to port on Monday. The rest will end their current voyages over the coming days.

CLIA members, which include almost all major lines, operate 272 vessels around the world.

The various places where their ships are spending the hiatus:

Many ships are tying up at the ports out of which they normally operate.

That'll be the case for many Royal Caribbean and Celebrity Cruises ships, for instance, according to Jonathon Fishman, a spokesperson for the parent company of the two lines.

"Ships will return to their home ports," Fishman told The Points Guy. "Of course, this is a fluid situation and adjustments will have to be made."

The situation is leading to some unusual sights at big cruise ports such as PortMiami, where vessels are now in abundance even as port operations quiet down.

Ships docked at PortMiami on Tuesday included Scarlet Lady, the first vessel from start-up line Virgin Voyages. Its inaugural voyage has been pushed back to August.

No ships had been scheduled to be at PortMiami on Tuesday.

The U.K.-based Cunard Line on Monday announced its flagship Queen Mary 2 and Queen Victoria would return to their home port of Southampton, U.K. from Australia and the Caribbean, respectively. Both were in the midst of world voyages that had been scheduled to last more than 100 days.

Cunard said passengers on the two ships would remain on board for the long journeys home.

"For those who remain on board Queen Mary 2 and Queen Victoria, we will continue to take every care of you and ensure your voyage back to Southampton is thoroughly enjoyable," Cunard president Simon Palethorpe said in a video message.

Secondary port cities that have extra dock space and aren't far from the big cruise hubs are getting some of their overflow. In the U.S., that means places like Jacksonville, Florida, which is taking in ships that normally would dock at PortMiami. Across the globe in Australia, it means places like Port Kembla, which is just down the coast from cruise hub Sydney.

Royal Caribbean's Radiance of the Seas already is docked at Port Kembla, and officials in the city have said they have 11 berths available to take in displaced vessels.

“We are committed to doing our part to support our fellow Florida ports and our partners in the cruise industry during this time,” Eric Green, the CEO of the port for Jacksonville, known as JaxPort, said about the port's assistance for displaced ships.

Other secondary ports in the U.S. that are getting cruise ships include Gulfport, Mississippi. In addition to the two Carnival ships that will dock in Gulfport, a Royal Caribbean vessel -- Majesty of the Seas -- likely will anchor off shore.

Wherever they happen to be

Not every cruise ship has a regular home port. Some spend a good chunk of their time traveling from place to place around the globe. That means that, on any given week, these vessels can be just about anywhere -- from the Caribbean to Europe or Asia.

For ships like that, lines generally are just parking them in whatever port happens to be nearby -- at least for now.

"The O-ships will all remain in their current locations for the immediate time being," Oceania Cruises spokesperson Tim Rubacky told The Points Guy, using the line's nickname for its six upscale, globetrotting vessels.

Specifically, for Oceania, home for now will be Miami for the line's Riviera and Sirena. The Regatta, Insignia and Nautica are sitting things out in Papeete, Tahiti; Rio de Janeiro; and Dubai, respectively, Rubacky said.

Only the location for the line's Marina still is being worked out, Rubacky said.

As of Tuesday, several vessels were anchored in various locations around the world.

Two Holland America ships, Nieuw Statendam and Nieuw Amsterdam, were anchored in Bahamian waters as were two Princess ships, Regal Princess and Sky Princess, and Royal Caribbean's Independence of the Seas, according to CruiseMapper.

Two Celebrity Cruises ships, Celebrity Edge and Celebrity Equinox, appeared to be anchored off the coast of Grand Bahama Island.

Carnival said its Galveston, Texas-based Carnival Vista and Long Beach, California-based Carnival Imagination both will remain at anchor near their home ports.

The cruise ships that have stopped operating in recent days or will stop sailing in the coming days will be spread out across ports and anchorages across the globe. No one port will see an unusually large number of vessels. But many ports will see ships that they don't normally see.

Related stories
American Airlines restores free 24-hour hold option
Holiday airfare is rising: What to know if you haven’t booked yet
Philadelphia will be the next airport to get a Chase lounge
5 unexpected places that sell cruises
Featured image by TNS via Getty Images