Head-to-head: Which new LaGuardia terminal is better for travelers? 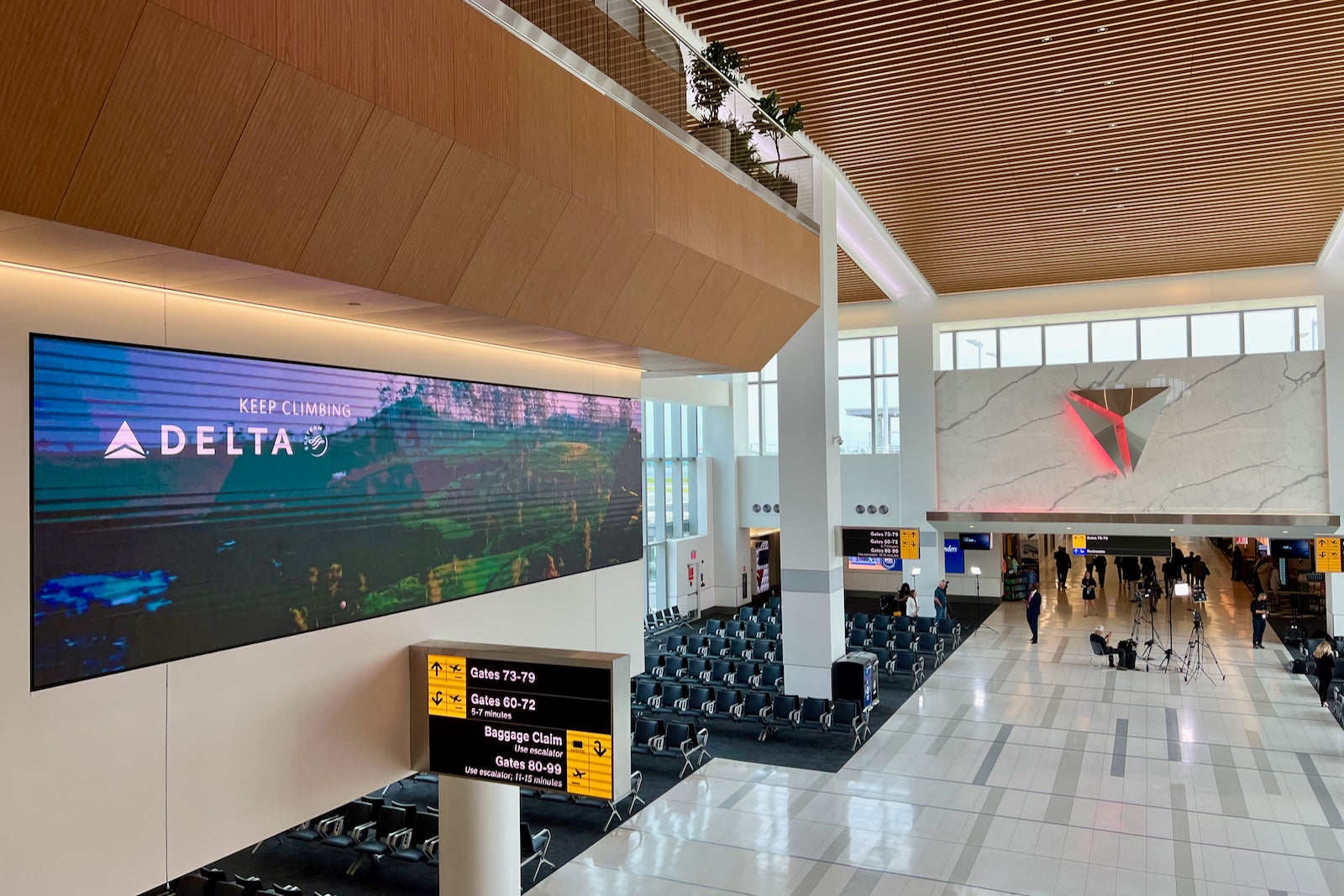 The airport is undergoing a significant redevelopment project, and much of the (long-overdue) new LGA has finally opened.

The customer-facing work on the new Terminal B is now complete, and Delta Air Lines just inaugurated service from its brand-new Terminal C earlier this month.

Nowadays, most travelers passing through LGA will check in, clear security and arrive at a gorgeous new terminal. (The exception is the Marine Air Terminal, home to Spirit Airlines and JetBlue's Boston shuttle, which will remain open in its historic design.)

Now that LaGuardia’s two main terminals, B and C, have entered the 21st century, we'll compare them head-to-head on many of the elements that are most important to TPG readers.

Perhaps the biggest complaint about the new LGA is that getting from the curb to the gate takes much longer than it did in the past.

That’s largely because of new pedestrian walkways and a multi-level design that helps ease roadway and aircraft taxiway congestion.

Before the new terminals opened, I could reliably get to my gate within ten minutes of arriving at the airport. Now, it’s much more variable.

Terminal B is made up of three distinct buildings connected via a set of pedestrian bridges.

The central departures and arrivals hall is where all flyers check in, clear security, collect bags and enjoy some pre-flight shopping and dining.

There is a western and an eastern concourse, each of which is connected to the main hall via an elevated pedestrian bridge.

Getting from the curb to the gate requires just one trip up an escalator and one trip down an escalator. It can take about 15 minutes (without factoring in security) to walk from the drop-off lane to the farthest gate in either concourse.

Meanwhile, getting from the curb to the gate — and walking between gates — will likely take much longer in the new Terminal C.

Terminal C also has a central arrivals and departures hall (called the "Delta Sky Way"), but you’ll need to go up an escalator (or elevator) to get to the central security checkpoint.

While Delta is roughly 80% finished with LGA construction, getting to the 60s and 80s gates will require traversing a temporary walkway that’s sure to slow you down.

While it may generally take longer to pass through Terminal C, there is one big advantage to this terminal: There’s a dedicated express drop-off curb designed for those traveling exclusively with carry-on bags.

There’s an escalator (or elevator) and pedestrian bridge that takes you directly to the security checkpoint, saving you the time and hassle of dodging between travelers dropping off checked bags.

Likewise, there’s a dedicated pedestrian bridge right next to security that’s connected to the parking garage, making it much easier for those leaving their cars at the airport to get to or from the terminal.

For frequent flyers, this one is pretty simple — Terminal B doesn’t have any Clear security lanes.

Instead, the terminal offers its own priority-branded security channel that’s available for $15 per trip per traveler. Dubbed “B-Fast,” this product can definitely be a time-saver, especially during peak travel windows.

In addition to “B-Fast,” Terminal B has dedicated lanes for TSA PreCheck, and priority lanes for premium passengers and elite members in addition to general security.

You can view live security wait times for both terminals on LGA’s website.

While access to Clear is likely enough for frequent flyers to prefer Terminal C’s security checkpoint, it’s also more technologically savvy — hanging above the checkpoint is a digital art installation made of 34 lenticular panels.

The scenes change with every Delta departure out of LGA. For instance, when a flight to Florida departs, the display will change to a beach.

Of all the airport terminals nationwide, LGA's Terminal B could easily be crowned the “lounge king." The terminal features an impressive variety of lounges for travelers.

There are three airline-branded lounges: a United Club, an Air Canada Maple Leaf Lounge and an American Airlines Admirals Club — each of which was built within the last few years and designed in an open-air style with plenty of amenities.

In addition, Terminal B is home to a signature American Express Centurion Lounge; a Chase Sapphire-branded lounge is in the works as well.

There’s even a Minutes Suite Express and a Be Relax Spa, both of which offer complimentary experiences for travelers holding a Priority Pass membership.

Delta’s Terminal C may not feature as many lounges as Terminal B, but it does have a brand-new flagship Sky Club.

Located right in the center of the airside area of the arrivals and departures hall, the new Sky Club spans nearly 32,000 square feet on a dedicated level above the terminal.

With beautiful finishes, floor-to-ceiling windows and bespoke amenities, the Sky Club at LGA is one of the airline’s nicest and most luxurious.

Plus, it’ll only get better, as Delta is working on the second phase of construction which will bring the lounge's overall area to more than 34,000 square feet. It will also add a year-round Sky Deck outdoor terrace.

Delta is keeping the legacy club near Gate 81 open during the construction process.

Everyone has different cravings at the airport, and both terminals have plenty of concessionaires to satisfy those hunger pangs.

Perhaps the most interesting difference between the terminals is that you won't find a Starbucks location in Terminal B. Instead, the terminal has a Dunkin outpost as well as New York City's famous Irving Farm coffee roasters.

In terms of general amenities, both terminals feature fantastic airside views. They have floor-to-ceiling windows, upgraded (and spacious) restrooms and a plethora of outlets in all seating areas.

When you land in Terminal B, using a ride-hailing service isn’t the most seamless experience.

You’ll need to exit security, pick up your checked bags and walk across a long hallway to the parking garage.

Once there, you’ll find a level dedicated to ride-hailing pickup. You’ll need to locate your driver by row and space number.

It can get quite crowded in this pickup area, and the cell phone reception isn't great either.

Meanwhile, in Terminal C, ride-hailing cars pull up to the standard arrivals curb. There’s no need to walk to a separate area, which is especially convenient for those with checked bags.

Your Uber or Lyft will pull up just steps from the baggage claim.

Both terminals are connected to a covered parking garage, and you can monitor live availability and prepay for your spot on the airport’s website. There are electric vehicle chargers in both lots as well.

That said, there are some interesting differences between the two lots.

The Terminal B parking garage is connected to the terminal at both the check-in and baggage claim levels. It spans seven levels and has 3,129 parking spaces.

The daily rate is $39, and there are ten EV spots in the garage.

The garage at Terminal C is only connected to the main terminal at the security level. For those without checked bags, that’s a big timesaver both on departure and arrival.

However, if you’re checking bags, you’ll need to take a few extra trips on elevators and escalators when parking in Terminal C.

Parking is also $6 more expensive per day here, with the daily total climbing to $45. This is likely because there are "just" 1,440 spots in this lot.

Ultimately, the LGA terminal you use will largely depend on which airline you’re flying.

The differences aren’t big enough to necessarily choose one airline over another, but there are some interesting considerations if you’re indifferent to the airport's carriers.

Whether it’s access to more lounges in Terminal B or the availability of Clear security checkpoints in Terminal C, be sure to do your research before you arrive at the airport.

When you arrive, be prepared to walk — the biggest similarity between the two new terminals is that it’s going to take you much longer to get from the curb to the gate.