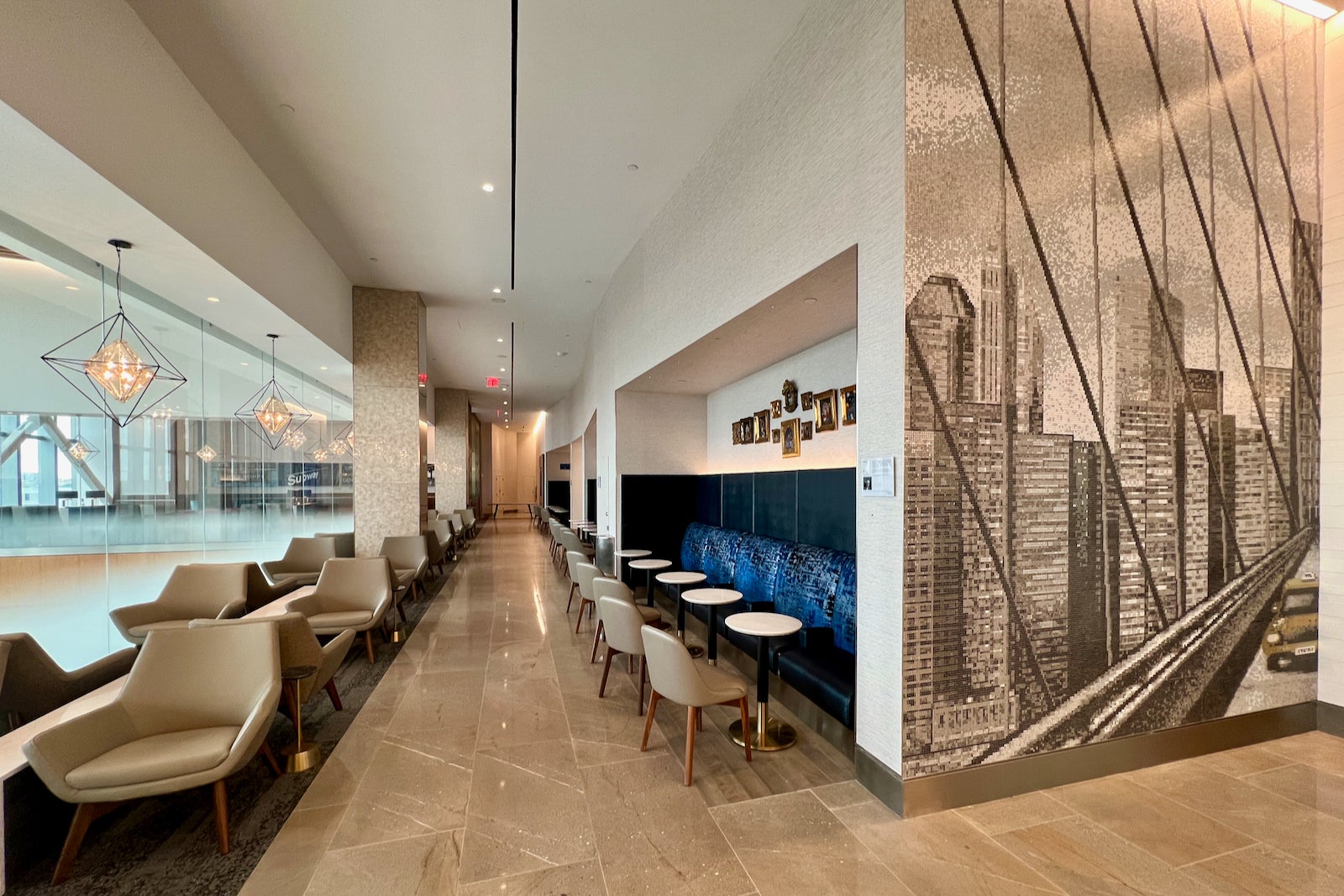 Airport lounges can be a great place to relax before your flight.

They come in many varieties — there are lounges operated by airlines, credit card issuers and independent companies — and access policies differ at each space.

Of the U.S. airlines, Delta Air Lines has done the best job at building out a network of membership lounges that travelers actually want to visit. The airline's Sky Clubs have been improving in recent years, with a focus on modern design, elevated food and beverage offerings and top-notch amenities.

Delta will open a new Sky Club on Saturday, June 4, in its new arrivals and departures hall in LaGuardia Airport (LGA). Once fully complete, the 34,800-square feet space will be the largest in the entire Delta system.

The airline took the wraps off its newest club on Wednesday, and TPG was there to get a detailed first look.

You'll find the entrance located just west of the central security checkpoint. There are plenty of signs pointing you to the hard-to-miss entrance.

Once inside, you can scan your boarding pass at one of the kiosks to gain entry without needing to visit an agent. You'll then take an escalator, elevator or stairs up one level to the lounge itself.

For more about entering the Sky Club, be sure to check out our detailed access guide.

When it opens on Saturday, the Sky Club will have seating for 580 passengers.

There are solo chairs, couches, individual workstations, dining tables, co-working tables and so much more. You'll have no issue finding a place to catch up on work or kick back with a cocktail in this lounge.

There are four distinct seating areas. Two areas flank each of the east and west sides of the lounge.

There's a central dining area with plenty of tables, and then a long corridor with a media wall and other workstations stretching along the width of the lounge's interior.

But it's not just about the variety of seating options. Each area is thoughtfully designed, with an emphasis on privacy and spatial flow.

Plus, thanks to the floor-to-ceiling windows and vaulted ceilings, there's plenty of natural light. While this Sky Club will be Delta's largest by square feet, it also feels like the biggest by volume — the ceilings are some of the tallest I've seen across the entire Delta network.

The new Sky Club takes another design cue from the Los Angeles (LAX) outpost — it features not one, but two buffets, which should help spread the crowds around the entire space.

The main buffet is located just after entering the lounge. It'll feature a mix of both hot and cold foods, many of which will cater to a range of dietary restrictions, including vegetarian, gluten-free and vegan. Kosher food is available upon request.

The second buffet is located closer to the western edge of the lounge. This will feature a rotating chef's action station that'll offer different New York City-inspired ethnic foods each week.

Each buffet is also flanked by a hydration station with Eversys coffee machines, a Coca-Cola freestyle machine and a Bevi water tap.

The main buffet sits adjacent to the lounge's premium bar, which is stocked with a range of high-end liquor options. Premium liquor is available for an additional charge (either in dollars or SkyMiles), while house beverages are included with entry.

Redeeming SkyMiles for a bottle of Dom Champagne remains an above-average value at 13,000 miles. The cash price is $195.

TPG toured the lounge's kitchens, which look more like something you'd find in a catering hall than at an airport. The chefs were visibly excited about the new digs, though it's still clear that we're in an airport — all the knives are chained to the floor as a security measure.

There are two sets of restrooms in the lounge, one at each end.

Once inside, you'll find plenty of mirrors and Le Labo hand soaps near the vanities.

My favorite feature, however, is the new green/red occupancy indicator above the stalls, which will tell you which ones are vacant without needing to walk up to each one.

In addition to the gender-specific restrooms, there are two gender-neutral family bathrooms, as well as a nursing room.

For one, the Sky Club has all the basics covered. There are power outlets, USB-A and USB-C ports at nearly every seat.

You're never more than an arm's length away from power. Plus, some of the workstations even offer Qi-wireless charging mats.

Fast and free Wi-Fi is available throughout the space, and download and upload speeds measured over 100 Mbps during my visit.

The LaGuardia lounge will also be the first in New York to feature Framery phone booths, which first debuted with the airline's new Sky Club in Salt Lake City.

There are seven of these phone booths in the lounge, and I'm sure they'll be a hit with the plethora of business travelers passing through the airport. There's even a wireless printer located just outside of the phone booths for all your printing needs.

Delta's newest lounges feel just as much like a place to relax as an art museum. The LGA location is no exception, as it features a handful of curated, NYC-inspired works.

My personal favorite is the train station-inspired lounge area, with subway signs and train motifs adorning the walls. Regardless of where you look, you'll likely be within an eyeshot of a piece of art.

The LGA outpost doesn't feature shower suites, unfortunately. Delta explained that since LGA doesn't handle long-haul flights, it decided to forgo building showers. Instead, the airline is using the space that it would've dedicated to showers for more seating areas.

LaGuardia is prone to delays, and Delta knows that. To help you during irregular operations, the airline added six agent-staffed desks in the lounge. You'll be able to seek help here if your flight is delayed or canceled.

During the busiest periods, you can even reserve your spot in a virtual queue using one of the digital kiosks. You'll receive a text message when it's your turn.

The best is yet to come

While the LaGuardia Sky Club is already one of, if not the, nicest in the entire system, it'll only get better.

As Delta works to complete the rest of the terminal, it'll also expand the Sky Club by adding nearly 100 seats, as well as a year-round, all-weather outdoor Sky Deck that'll measure 1,800 square feet.

The expansion will also add a second bar area when it opens in 2024.

Delta says it's 80% complete with the entire LaGuardia redevelopment project, but it's already a massive improvement that's only poised to get better, especially with the opening of the snazzy new Sky Club on Saturday.