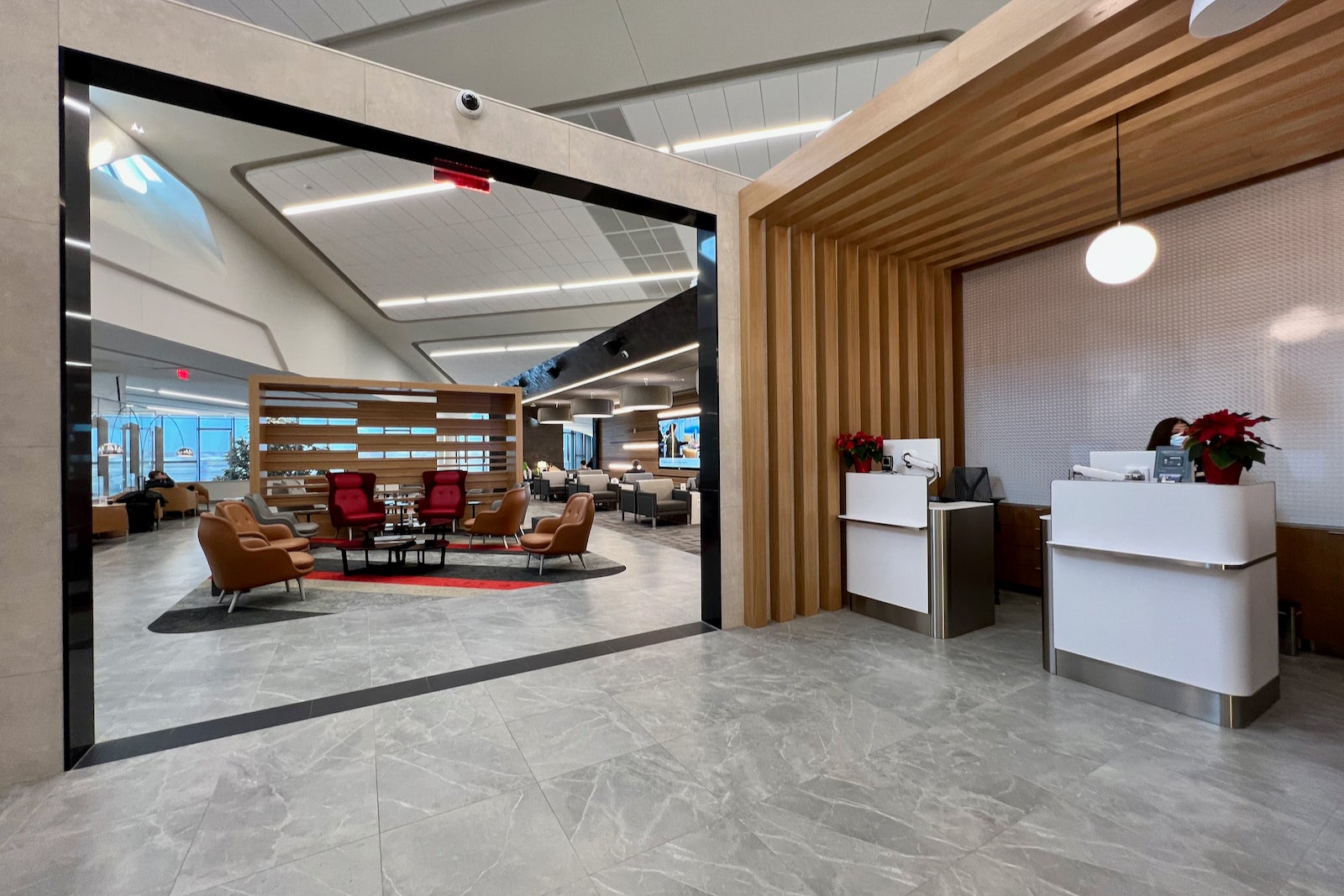 The carrier, along with the operator of LGA’s Terminal B, LaGuardia Gateway Partners, opened the final phase of construction in the Western Concourse on Thursday.

In addition to the four new gates with floor-to-ceiling windows, modernized seating and new concessionaires, the Western Concourse is now home to American’s new Admirals Club in LaGuardia.

TPG went for a first-look tour of the new spaces on Friday — and can confirm that Santa was indeed very generous this year.

Inside the new Admirals Club

The highlight for American flyers will undoubtedly be the new Admirals Club.

Located one floor above the gate level, the lounge is accessible via a pair of escalators.

Once at the top, you’ll find the entrance to the lounge on the left.

There are five check-in desks staffed with agents who can help with flights reservations and other day-of-travel issues.

As you enter the lounge, you’ll be greeted by a large living area with a variety of seating options, ranging from individual recliners to couches and more.

This is also where you’ll find a hallway that will connect to the rest of the lounge when it opens next summer. Once complete, the lounge will span more than 20,000 square feet, with room for over 350 passengers.

Until then, the lounge is on the small side and will likely get quite crowded during peak departure windows.

In addition to the living area, there are a handful of two-person tables lining the perimeter of the lounge, which leads to the bar and dining area.

Along the way is a media room, with eight seats facing a large TV.

The dining area has a few tables, along with three two-person booths that are built into the wall.

The buffet is along the edge of the lounge and features American’s pandemic-era light bites service, including crudites, hummus, cheese cubes and hard fruits.

Note that the bar is currently closed as the lounge is waiting to receive its liquor license, which should happen in the next few days, according to the staff.

There’s a tree in the center of the space, which helps add a sense of tranquility to an otherwise hectic airport experience.

The new lounge trades apron views for an open-air aesthetic overlooking the terminal and taxiways in the distance — which might be the only downside for some aviation enthusiasts.

All in all, though, the new space is a massive improvement compared to the old one.

The Western Concourse now has four additional gates in operation, each with plenty of seating and access to power outlets.

Even more gates have been built, but they won’t become operational until the old concourse is demolished and jetbridges are installed.

The new gates are designed to seamlessly integrate with the existing ones — most travelers won’t even be able to tell that the concourse opened in phases.

Along with the new gates is a kids’ play area that’s designed to resemble the New York City skyline.

To coincide with the completion of the Western Concourse, the last remaining “old” gates in Terminal B are now officially closed, marking the end of the leaking ceilings, narrow hallways and long bathroom lines that LaGuardia flyers used to experience.

However, there’s still just a little bit more work that needs to get done in Terminal B. For one, the old central concourse must be demolished in order to make way for additional gates in Western Concourse.

Additionally, work on the pedestrian bridge that connects the headhouse with the Western Concourse is still underway, with completion scheduled for early next year.

Until then, you can still catch one final glimpse of the old terminal as you walk through an old hallway to get between the two buildings.

But don’t stare for too long: the newly completed Western Concourse is waiting for you on the other end.