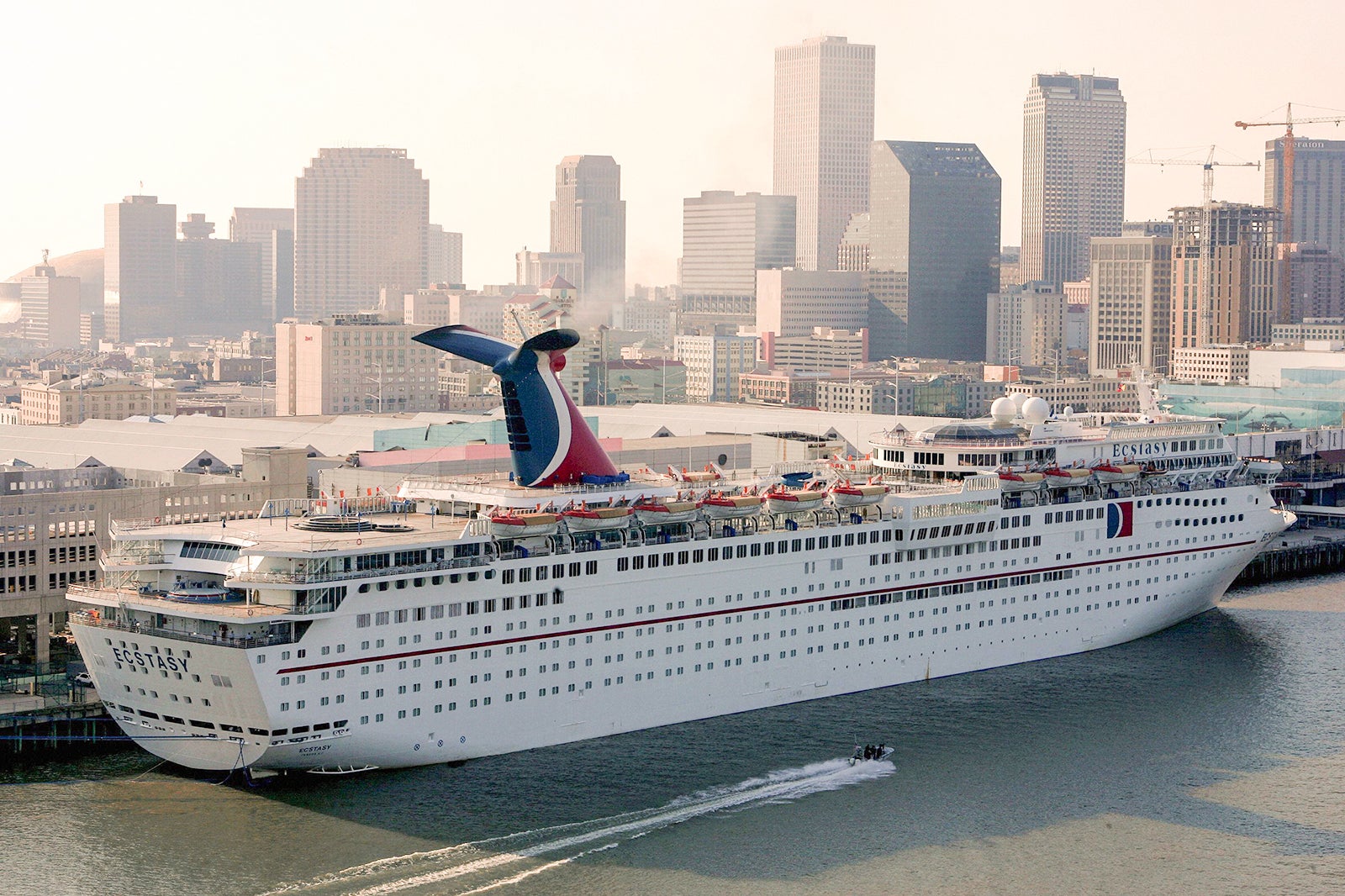 Why I'm sad Carnival Cruise Line is retiring its smallest ship
This post contains references to products from one or more of our advertisers. We may receive compensation when you click on links to those products. Terms apply to the offers listed on this page. For an explanation of our Advertising Policy, visit this page.

Carnival Cruise Line's oldest and smallest ship, the 2,052-passenger Carnival Ecstasy, isn't the most awe-inspiring cruise vessel afloat. Not by a long shot.

Its top deck lacks the sort of splashy, family-fun attractions found on newer Carnival ships, such as sprawling water parks, ropes courses, high-in-the-sky pedal rides and — on Carnival's new flagship Mardi Gras — even a roller coaster. Few of its cabins offer balconies, which can make them feel claustrophobic.

But despite all of that, I find myself struck with sadness this week that Carnival Ecstasy is on its final voyage for the line.

That's not the main reason, however, that I feel a tinge of melancholy this week upon thinking about the retirement of a ship that is bumping up against the end of its useful life. Cruise ships are built to last about 30 years.

What the retirement of Carnival Ecstasy from the Carnival fleet represents to me is the latest nail in the coffin of what I like to call the era of the intimate floating megaresort — emphasis on intimate.

Carnival Ecstasy is one of the last remaining vessels at the big mainstream lines such as Carnival, Royal Caribbean and Norwegian Cruise Line that dates back to a time when megaships were big but not that big.

Designed to carry around 2,000 vacationers as compared to the 6,000-plus that the biggest cruise ships carry today, they were vessels of a size that offered a lot of amenities (hence, the megaship moniker) but still felt cozy and not too crowded.

On these ships, you were vacationing with a significant number of other people, for sure, but not nearly as many as you'll find on modern-day vessels.

There was a more human level of interaction on the smaller big ships of Carnival Ecstasy's heyday that — to my regret — is fast disappearing. You'd run into the same people more often and experience entertainment in more intimate spaces. You'd become more familiar with the crew.

When it came time to pour off the ship into a port, there would be fewer of you rushing to the same tourist sites.

When megaships weren't quite so mega

Carnival Ecstasy was, notably, one of eight similar Carnival vessels unveiled between 1990 and 1998 that elevated the line into the big leagues of the North American tourism business.

At the time Carnival Ecstasy debuted, Carnival had just a handful of ships — all significantly smaller and with fewer amenities. The arrival of the vessel and its seven sisters in quick succession in the 1990s helped drive the growth of the cruise industry in North America and catapulted the line into a major tourism company.

These were ships that, in a more comprehensive way than Carnival's earlier vessels, offered up lots of decktop pool and lounge areas, as well as sprawling interior public areas full of bars, showrooms, restaurants and shops.

Along with a new series of so-called Sovereign-class ships at rival Royal Caribbean that were roughly the same size, they were the megaships of their day.

But, as noted above, they were a fraction of the size of today's megaships. At 70,367 tons, Carnival Ecstasy was one of the biggest cruise ships in the world when it debuted in 1991. It's now less than half the size of the world's biggest cruise ships, including Mardi Gras. The new Carnival flagship measures 181,808 tons and can carry 5,282 passengers at double occupancy (6,465 with every pulldown bunk and pullout sofa filled).

As any executive at Carnival, Royal Caribbean or Norwegian will tell you, the mantra of would-be cruisers for years has been "give me more onboard options" — more decktop amusements, more bars, more restaurants, more showrooms. To deliver on this, the companies had to go bigger with the ships. For many megaship-loving cruisers, bigger is better.

I will stipulate the fact that, when it comes to megaships, the newer, bigger vessels have a lot more to offer. For the ultimate megaship experience, it's hard to beat a vessel such as Royal Caribbean's 236,857-ton Wonder of the Seas — the world's largest cruise ship. This is a ship so big that it has multiple main pool areas, a kiddie splash zone, surfing simulators, a miniature golf course, a basketball court and even a zip line. And that’s just on its top deck. Inside the vessel, you’ll find more lounges, bars, restaurants and shops than you can imagine, plus a huge casino, spas, theaters and even an ice-skating rink.

But I still have a special fondness for the smaller megaships of old, such as Carnival Ecstasy — and it's not just because I miss the intimacy that many of the megaships of the 1990s (and even the 2000s) offered.

These smaller megaships also are more versatile, able to sail out of smaller ports such as Mobile, Alabama (the home of Carnival Ecstasy until this week), that might not be able to support a bigger vessel. They also can access smaller destination ports such as Havana, Cuba, that aren't reachable by bigger ships. Should Havana ever reopen to North American-based cruise ships again, only smaller ships such as Carnival Ecstasy would be able to pull right into its harbor.

The end of the 'small' megaship era

Until just a few years ago, we all could "have our cake and eat it, too" when it came to big and small megaships. There were ever more truly massive megaships rolling out, but many of the smaller megaships that dated to the late 1980s and 1990s still were around.

That all has changed quite suddenly in just the past three years, thanks to the COVID-19 pandemic.

An industrywide shutdown lasting more than a year and plunging bookings prompted many of the biggest cruise lines including Carnival, Royal Caribbean, Holland America and Princess to retire many of their oldest ships, which were also their smallest ships.

Carnival, notably, entered the COVID-19 downturn with all eight of its small Fantasy class ships still sailing. In early 2020, the eight vessels accounted for about a third of the entire Carnival fleet. Within months, though, Carnival had announced the quick retirement of four of the eight vessels, and earlier this year it retired a fifth vessel in the series.

After this week's sailing of Carnival Ecstasy ends Saturday, it will become the sixth of the original eight Fantasy-class ships to leave the Carnival fleet.

Carnival's sister brand Holland America removed four of its oldest, smallest ships during the COVID-19 downturn, amounting to a 29% reduction in the size of its fleet. Princess Cruises has removed five of its older, smaller ships from its fleet in the past three years.

The COVID-19 crisis also saw the retirement of Royal Caribbean's two smallest ships, Empress of the Seas and Majesty of the Seas.

In short, the landscape of relatively small, intimate ships among the big mainstream lines has changed drastically over the past few years. And, to me, that's something to lament, even if it's a natural part of the evolution of the cruise business.

Featured image by PAUL J.RICHARDS/AFP/GETTY IMAGES
Editorial disclaimer: Opinions expressed here are the author’s alone, not those of any bank, credit card issuer, airline or hotel chain, and have not been reviewed, approved or otherwise endorsed by any of these entities.