First look at Royal Caribbean's Wonder of the Seas: What I like, don't like and can't find on the world's largest cruise ship

Articles
Ashley Kosciolek has spent more than a decade writing about travel, with particular emphasis on cruises. Her favorite cities include London; Amsterdam; Krakow, Poland; Phnom Penh, Cambodia; Dawson City, Yukon; and anywhere known for outstanding pizza and theater. You can follow her daily exploits, both at sea and on land, on Instagram or Twitter @slyjabroni.
Follow
March 05, 2022
•
8 min read 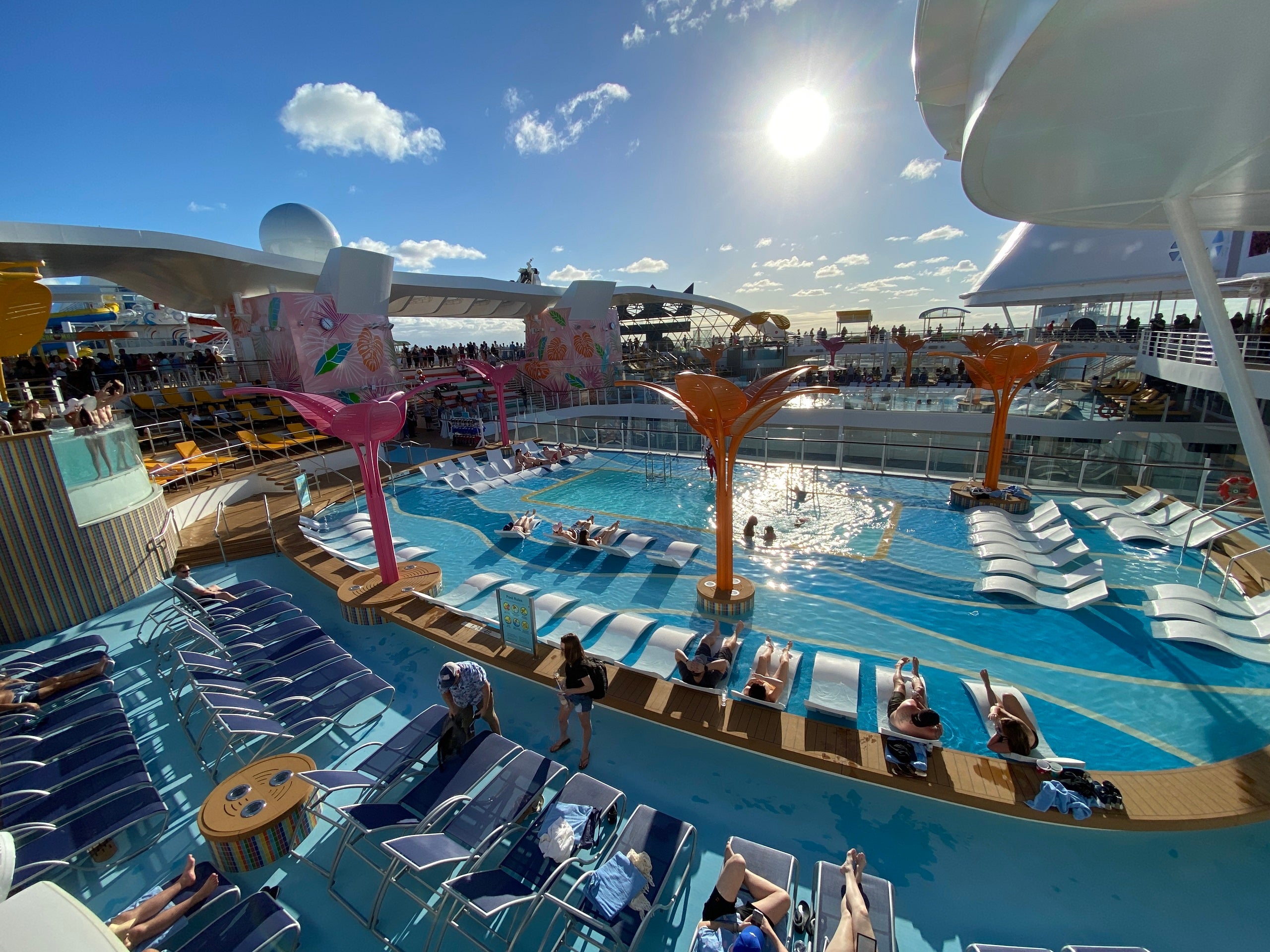 For the next week, The Points Guy is sailing on the world's largest cruise ship, Royal Caribbean's 6,988-passenger Wonder of the Seas. The vessel, which is sailing at about 60% capacity with 4,200 cruisers, feels largely familiar but with a few buzzworthy tweaks and enough activities to keep even the most rambunctious cruisers busy.

I'm bringing you a first look at the new additions and how they stack up, along with a shoutout to some of the elements that are notably missing from this Oasis-class iteration.

The Mason Jar is Royal Caribbean's brand-new, for-a-fee take on Southern cuisine. Found on Deck 15 starboard, near the entrance to the Windjammer buffet, the eatery offers both brunch ($24.99) and dinner ($34.99). I dined there for brunch and was able to choose from a selection of menu options that included chicken and waffles, stuffed French toast, shrimp po'boys with fries, overnight oats and other items.

My recommendations include the massive cinnamon roll with frosting, the Nashville hot chicken and the red velvet pancakes. The dinner menu is similar, but it also includes barbecue options.

If you'd like a cocktail with your meal, try the Peanut Butter and Jelly Old Fashioned, which is peanut butter whiskey, bourbon, strawberry jelly and walnut bitters garnished with mini PB&J sandwiches; the No Joke, Smoke & Coke, which is a literal smoke show featuring bourbon and Coke; or, for anyone in the mood for something sweet, the Southern Belle, mixing bourbon, mint, lemon juice and blueberries with a dash of club soda.

As is the case on many of Royal Caribbean's newest ships, there's a stand-alone Starbucks kiosk on the Royal Promenade. Oddly, Cafe Promenade -- which used to be known for its free drip coffee and non-Starbucks specialty coffees -- now carries Starbucks at its Deck 5 midship location on the port side.

At first, I was annoyed by the change, given the prices, but the good news is that Starbucks drinks from Cafe Promenade are covered by beverage packages that include coffee drinks.

Ice shows are nothing new to Royal Caribbean, which houses them in its Studio B ice rink on Deck 4, midship. But the new show on Wonder of the Seas, titled "365," is absolutely breathtaking.

In what seems to be a loose progression through the four seasons, ice skaters perform group and partner numbers to songs from artists that run the gamut from BTS to AC/DC. It made me scratch my head at times, but somehow it works.

The costumes can't help but grab attention, too. Sometimes they're a combination of rock opera and neon steampunk. At others, they mix floral '70s leisure suits with emoji masks. It's bizarre and wonderful, and when they add in aerial acrobatics, flips and even fake snow, it leaves cruisers not knowing where to look next.

The kicker? The entire show happens without the need for specialists to work the lighting. The skaters' costumes contain beacons that allow automated lighting to follow them around as they skate. Mind blown.

A complement to the cavernous Social 100 teen area on Wonder of the Seas, the Social 100 Patio is a dedicated outdoor area for passengers ages 13 to 17. It's found on Deck 17 forward on the port side, and it features alcoves with beanbag chair seating, a giant chessboard and even a spot for selfies.

A precursor to this improved version debuted on sister ship Oasis of the Seas several years ago when part of the teen club was sacrificed to make room for Portside BBQ, an outdoor barbecue restaurant. The alfresco teen area was added to make up for the decreased indoor space.

On Wonder of the Seas, the indoor teen area, Social 100, which is one deck below, gives teens a come-and-go area to hang. It's equipped with snack machines, TVs with video games and plenty of seating to just chill.

One of the first-in-fleet features on Wonder of the Seas is Wonder Playscape, an outdoor play area with climbing structures, slides, a lookout that faces the ship's wake and a lower area with places to hide and games to play.

Because the space is located on Deck 16 aft on the starboard side, it can be a bit windy on sea days. The signage says it's intended for children as old as 12, but the 8-year-old in my travel party was bored with it in about five minutes. It's likely great for younger kids, though; perhaps the target age just needs to be adjusted.

Wonder Dunes is the ship's miniature golf course on Deck 16 aft on the starboard side. To be fair, it's one of the most elaborate mini-golf courses I've seen on a ship. However, its purpose wasn't immediately clear to me nor to one of my adult travel companions. The aforementioned 8-year-old had to tell us it was mini-golf.

Part of the problem is that the greens aren't green; they are multicolored. Another issue is that Dunes is right next to the Wonder Playscape, which means that confused children were running between slides on the Playscape and obstacles on the golf course, thinking they were climbing structures. (And equally confused parents were allowing them to do so.)

Another new addition on Wonder of the Seas is The Vue Bar on Deck 15 forward, port side. It's a lovely and fairly intimate setup, which wasn't crowded when I visited, but because of its location near the front of the ship, it was extremely windy -- so much so that the menus were blowing over.

It also doesn't have a dedicated menu. Instead, it shares one with the two Lime and Coconut Bars on board. Mind you, the drinks are super tasty, but I thought maybe since it's a new bar concept, the options would be unique.

For years, Royal Caribbean has boasted performances of big-name Broadway shows -- "Saturday Night Fever," "Cats," "Mamma Mia!," "Hairspray" and others -- on its ships. As a Broadway buff, I'm disappointed that there isn't one on Wonder of the Seas.

But the vessel does have other stellar shows, including the "365" ice show, comedy bits, song-and-dance revues and "Effectors 2," which is scheduled to start in July and feature choreographed drones.

With the rollout of Mason Jar, Royal Caribbean did not add Portside BBQ to Wonder of the Seas' repertoire of onboard eateries. Instead, passengers can opt to have dinner at Mason Jar for their barbecue fix.

The downside? Portside BBQ (found on Oasis of the Seas) charges $7.99 for a choice of protein (turkey, chicken wings, pulled pork or brisket) with two sides and dessert. At $34.99, dinner at Mason Jar is more than four times the price.

On other Oasis-class vessels, there are two FlowRider surf simulators. On Wonder of the Seas, there's only one; the second has been replaced by the Wonder Playscape.

To be frank, I sailed Oasis of the Seas several times and never saw enough demand for both FlowRiders to be operating at the same time. Removing one of them for the latest vessel was a smart decision.

A recent trend across the cruise industry has been the addition of onboard escape rooms. Usually, they come with a fee and require reservations.

I tried to make a booking on Wonder of the Seas, but I was told that, due to supply chain issues, the room isn't ready yet. So, for now, the room is missing from the activity lineup. There's no word yet on when it will be operational.

One major cruise element that's noticeably missing is face masks. On Feb. 15, Royal Caribbean dropped its mask mandate for vaccinated passengers. Since then, it has also scrapped its separate areas for those who are vaccinated and unvaccinated.

Most cruisers seem to be taking advantage of the newfound freedom, which has made this sailing seem "normal" so far.

Per the U.S. Centers for Disease Control and Prevention, the ship is operating with a 95% passenger vaccination rate, excluding young children.

Featured image by View from above the pool deck on Royal Caribbean's Wonder of the Seas (Photo by Ashley Kosciolek/The Points Guy)
Editorial disclaimer: Opinions expressed here are the author’s alone, not those of any bank, credit card issuer, airline or hotel chain, and have not been reviewed, approved or otherwise endorsed by any of these entities.