Vaccinated vs. unvaccinated: Two different experiences on Royal Caribbean's first cruise from the US in more than a year

Articles
Ashley Kosciolek has spent more than a decade writing about travel, with particular emphasis on cruises. Her favorite cities include London; Amsterdam; Krakow, Poland; Phnom Penh, Cambodia; Dawson City, Yukon; and anywhere known for outstanding pizza and theater. You can follow her daily exploits, both at sea and on land, on Instagram or Twitter @slyjabroni.
Follow
July 05, 2021
•
8 min read 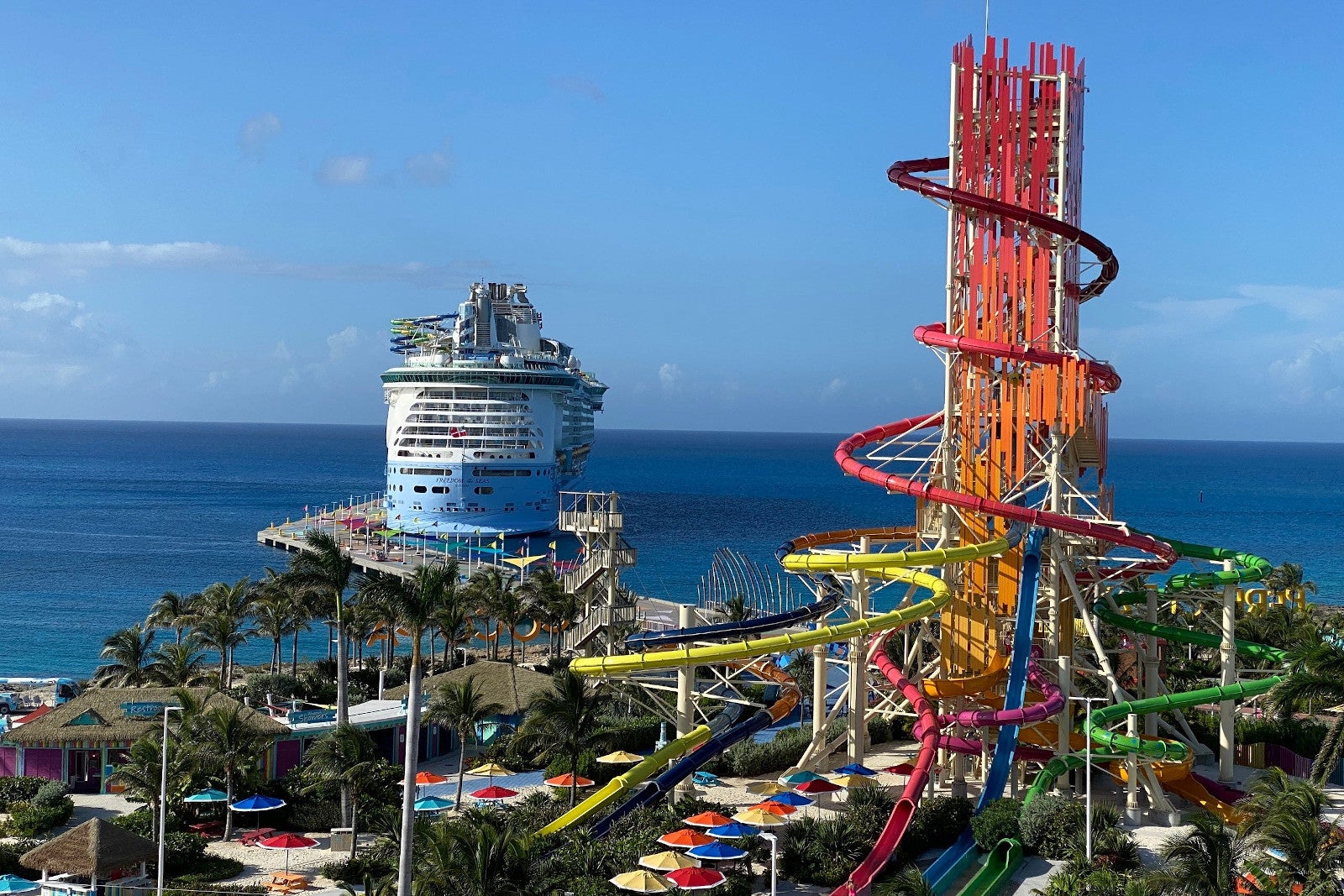 I just disembarked Royal Caribbean's Freedom of the Seas, the line's first cruise ship to sail from a U.S. port in more than 15 months. It felt normal in many ways, but compared to two other recent cruises I took, it was a bit more controlled.

The line's decision to sail less than 95% vaccinated (which requires each ship sailing from the U.S. to complete test voyages under the U.S. Centers for Disease Control and Prevention's supervision) means that there are restrictions on board. These restrictions include wearing a mask in most public spaces and limitations on areas and services unvaccinated passengers can access.

Here, I'll explain how various facets of the sailing look for both vaccinated and unvaccinated cruisers.

Each person sailing was required to download the Royal Caribbean app. This app allowed us to check in for the voyage, set up an onboard account, fill out a pre-boarding health questionnaire and complete the e-muster drill (which replaces traditional muster drills where people gather in large groups).

Passengers also had to select specific check-in times for embarkation day, ensuring that crowds stayed thin at the terminal during the boarding process.

Additionally -- following the first departure of Adventure of the Seas two weeks ago when two teenagers tested positive and were flown home at Royal Caribbean's expense -- unvaccinated cruisers had to purchase special travel insurance. This insurance would cover the cost of repatriation on a private charter flight and/or medical care if they tested positive during the sailing.

When I arrived at the Port of Miami, I had to pass through a checkpoint. At this checkpoint, an agent told me that if I wanted to present a vaccine card, that was the time to do so. I showed mine, and the agent gave me a purple rubber bracelet to wear. This bracelet allowed me to access areas of the ship reserved for vaccinated passengers. Then I was allowed to proceed to the check-in area.

Passengers who didn't voluntarily show proof of vaccination, either because they weren't vaccinated (primarily children, according to Royal Caribbean executives) or didn't have their vaccine cards, were directed to a testing area. In the testing area, they were each given an on-site rapid antigen test. Staff would later identify these passengers by holes punched in their SeaPass cards.

From there, I went to the second floor to check in. On my way, I passed lots of hand sanitizer dispensers and signs reminding people about social distancing and masks. There were physical check-in desks, but I checked in using the app, so I headed straight for the area where port workers were scanning digital SetSail Passes.

They waved me through to security, where my carry-on was screened. When I reached the third floor on my way to the gangway, I passed by a small waiting area with several groups of bored-looking people. An attendant who was monitoring the entrance told me they were passengers waiting for their test results. A positive test would preclude them from embarking on the cruise.

Related: Will I need a COVID-19 vaccine to cruise? A line-by-line guide

Royal Caribbean President and CEO Michael Bayley, who was also on the sailing, said he expects the CDC to roll back mask mandates on ships with a large percentage of vaccinated passengers as early as this week. Unfortunately, the announcement didn't come in time for this voyage.

All cruisers -- regardless of vaccination status -- had to wear masks in indoor spaces unless they were explicitly designated for vaccinated cruisers. Masks were not required outdoors or while eating or drinking, but I found myself constantly worrying about whether I needed to have a mask on or not.

Signage was almost over-the-top prevalent to remind passengers to stay socially distant, sanitize their hands and wear a mask. Reminders going from indoors to outdoors and vice-versa were especially helpful.

As on most ships these days, there were also Purell hand sanitizer dispensers at the entrances to all restaurants, bars, lounges and other public areas, as well as in stairwells and elevator alcoves.

Those with the vaccine were able to go anywhere onboard, and areas specially allotted for passengers who had their shots had no mask-wearing rules. Vaccinated-only areas included the spa, casino, fitness center (during most operating hours), Izumi sushi and hibachi, Chef's Table and the lower decks of the main dining room and theater.

I noticed that the areas reserved for vaccinated passengers were rarely, if ever, crowded. During one performance, I went to the theater's upper level (where anyone, including unvaccinated passengers, was able to sit) to see what it was like. While there, I noticed most of the passengers in this area were parents with young children.

Interestingly, certain shows -- such as the ice show in Studio B -- required reservations due to their lower capacity. The venue was open to both vaccinated and unvaccinated passengers.

When I learned that the line would be creating some separate spaces and mandating masks, I wondered if the rules would be enforced and, if so, how strictly. Long story short: They were, very strictly. I saw a couple of crew members nicely ask passengers to pull their masks up over their noses in public spaces (and they complied). Crew members were also positioned at the entrances to restaurants, the theater and even at the Freestyle soda machines to push the buttons for passengers. Wristbands were also diligently checked in spaces intended for vaccinated cruisers.

On sailings of a certain length, further requirements for unvaccinated passengers include two more tests after embarkation: one during the sailing and one just prior to departure from the ship.

As a side note, the ship's Windjammer buffet was not open for dinner during the sailing. This closure is related to staffing and the logistics of keeping passengers socially distanced, despite the fact that the ship was sailing at less than 30% capacity and 93% of passengers were vaccinated. It doesn't have anything to do with vaccinations directly, but I think it's worth a mention since it's a change that didn't exist on my first two sailings.

This voyage included calls on Nassau and Perfect Day at CocoCay, Royal Caribbean's private island, in the Bahamas.

In Nassau, vaccinated passengers were allowed to explore however they wished, but unvaccinated cruisers were required to take ship-sponsored excursions to leave the ship.

On CocoCay, everyone was allowed to go ashore on their own and no masks were required.

Related: Cruise hack: 6 ways to turn a voyage on a mass-market ship into a luxury experience

Overall, the sailing was pleasant and it was great to be back on board a sailing from Florida. However, passengers on U.S.-based voyages should be aware that protocols are likely to differ by cruise line, ship and departure state.

In addition to having more rules in place than some other cruise lines, Royal Caribbean also enforced those protocols more strictly, with crew checking for wristbands in vaccinated-only venues and checking for masks in indoor places accessible to everyone.

Further, the onboard mask rules were confusing. It's easy to remember when you either have to wear them all the time or don't have to wear them at all. But keeping track of which places were which on this voyage made my head spin.

Regardless of the rules, passengers are sure to have a good time.

Related stories
Here are the best Black Friday travel deals of 2022
Great deal: Book business class tickets at premium economy prices with this Avianca LifeMiles sale
Holiday gift guide: TPG’s 22 travel-friendly picks for 2022
Vail Resorts lift-ticket sales capped; buy your Epic Pass by Dec. 4
Featured image by Freedom of the Seas docked at Perfect Day at CocoCay, Royal Caribbean's private island, which has the tallest water slide in North America (Photo by Ashley Kosciolek/The Points Guy)
Editorial disclaimer: Opinions expressed here are the author’s alone, not those of any bank, credit card issuer, airline or hotel chain, and have not been reviewed, approved or otherwise endorsed by any of these entities.