BOAC Lands in New York Again After 45 Years (Sort Of) 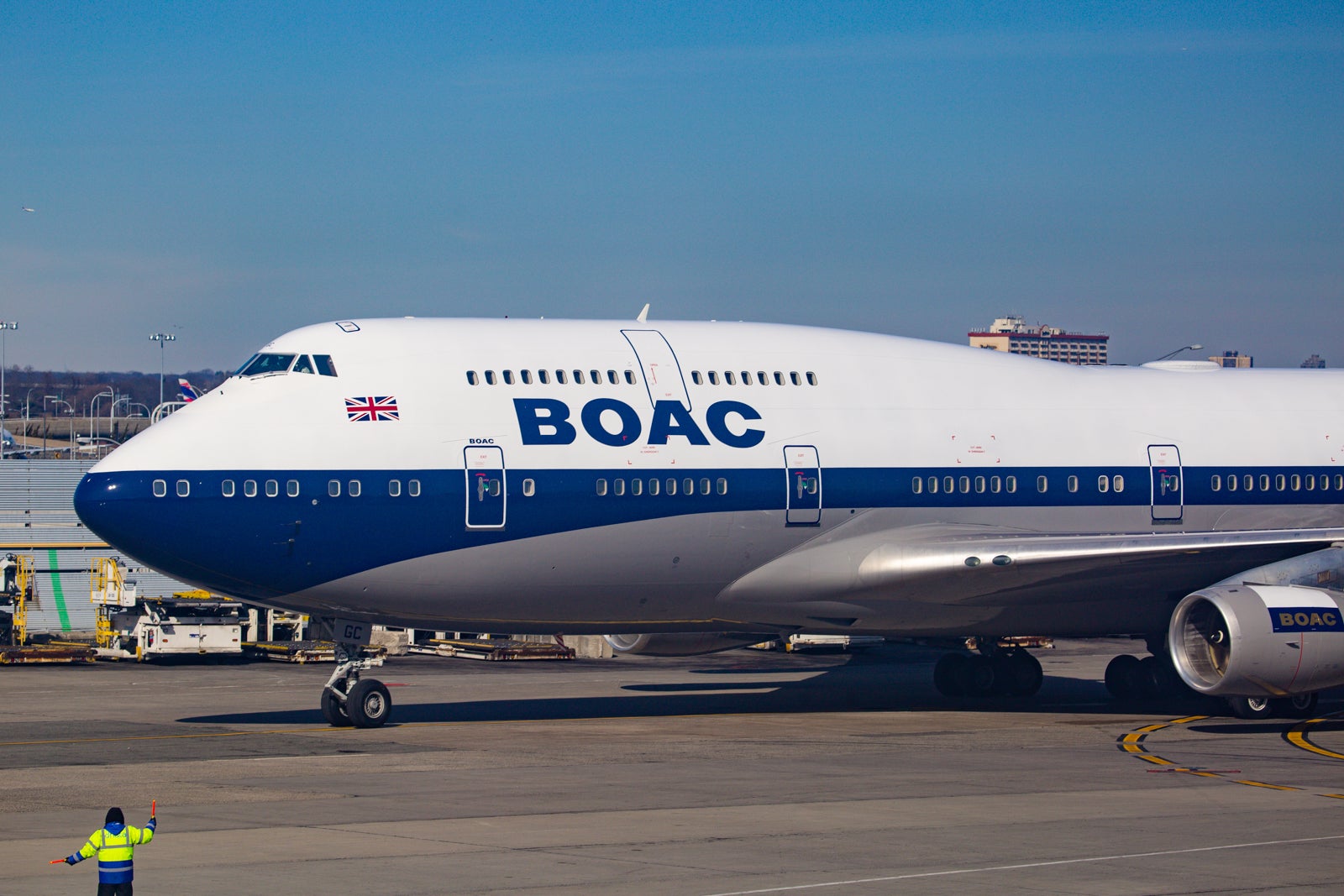 BOAC Lands in New York Again After 45 Years (Sort Of)
This post contains references to products from one or more of our advertisers. We may receive compensation when you click on links to those products. Terms apply to the offers listed on this page. For an explanation of our Advertising Policy, visit this page.

When British Airways flight 117 took off from London Heathrow this morning, it wasn’t just one of the dozen daily BA flights between London and New York — this one was special. An aircraft in a livery that hadn’t landed on US soil in decades touched down at JFK Tuesday, bringing back memories of the early days of jets and the Golden Age of Travel.

Monday, British Airways unveiled a special Boeing 747 decked out in the livery of the British Overseas Airways Corporation (BOAC) — the predecessor of British Airways. And Tuesday the special Jumbo Jet flew its first commercial flight in the new colors, landing at JFK airport on runway 31R at 10:47am.

The special-livery 747 is the first of a handful of aircraft to be painted in retro liveries as part of the 100-year anniversary of British Airways. Retro-colored airplanes are a big trend lately, with many airlines painting planes in their old color schemes.

BOAC was created in 1939 when the first iteration of British Airways and Imperial Airways merged. A state-owned airline, the carrier flew until 1974 when BOAC and British European Airways joined forces and formed what is today's British Airways. BOAC flew its first commercial 747 flight in 1971, using the then-new 747-100 model, which had made its first flight just two years earlier. Another reason for BA to place the retro livery on the 747 was to celebrate the Jumbo Jet's 50th birthday.

While this may not have been a real BOAC airplane, the landing marked a return of the airline, of sorts, to the Transatlantic service it used to be known for along with such storied, and also defunct, names such as Pan Am and TWA.

This 747-400, registered as G-BYGC, is 20 years old. It operated its inaugural commercial service with a flight from London to Johannesburg in 1999. British Airways historian Jim Davies spoke at JFK today, telling a group of journalists that the aircraft has performed 10,457 landings over its lifespan.

There are a few signs that this is a more modern version of the Queen of the Skies and not the 747-100 that operated with BOAC in the early '70s. At the rear of the aircraft there's a small British Airways logo, the dates the airline has been in operation, and a '100' that appears as if it was written on the side of the jet with a giant Sharpie.

Things aboard those BOAC 747-100s looked very, very different from today. In the image below is the first-class section in the nose of the plane in a vintage shot. These days, first and business class aboard BA 747s aren't the top product in the world — several competitors have arguably far better seats.

G-BYGC will be retired in 2023, along with the rest of BA's fleet of 34 Jumbo Jets by February 2024. British Airways says it plans on painting a few other aircraft in "heritage liveries," although the airline has yet to reveal what color schemes those will be, and what airplane models will get them.

Unfortunately no retrofits were completed on the inside of G-BYGC while it underwent its exterior makeover, and when TPG asked if any of the 747s would be getting BA's new business class which will be rolling out on its soon-to-be-delivered A350s this summer, Hamish McVey, head of Brand and Marketing at BA, told us that they would not be seeing any upgrades.

On display at the airline's first class Concorde lounge at JFK's Terminal 7 was real BOAC paraphernalia, including items like ashtrays, employee newsletters and 747 promotional materials.

A few British Airways employees dusted off old BOAC uniforms and modeled for the cameras.

This 747 will fly back to London Tuesday and then on to Chicago (ORD) the next day. It will be in commercial service so if you want to fly it, you can try and plan on tracking its routing on a website like FlightRadar24.

There a few different mileage currencies you can redeem for flights on British Airways, the most common being American Airlines miles and British Airways Avios. A one-way flight in economy from New York JFK to London Heathrow goes for 20,000 Avios (13,000 off-peak), but you'll be hit with significant fuel surcharges. Booking through American will cost you 22,500 miles off-peak or 30,000 miles on peak dates. You can transfer Chase Ultimate Rewards and American Membership Rewards to Avios at a 1:1 ratio.

The British Airways Visa Signature Card is currently offering a bonus of 100,000 bonus Avios after you spend $5,000 on purchases within the first three months from account opening.

The Citi® / AAdvantage® Platinum Select® World Elite Mastercard® has a sign-up bonus of 50,000 bonus miles after spending $2,500 on purchases in the first three months of account opening.