The best airport amenities of 2021

Articles
Harriet Baskas is an award-winning journalist and the author of eight books. She writes, most often, about airports, air travel, unusual museums, and odd adventures for a variety of outlets, including her blog, StuckatTheAirport.com.
Dec. 30, 2021
•
6 min read 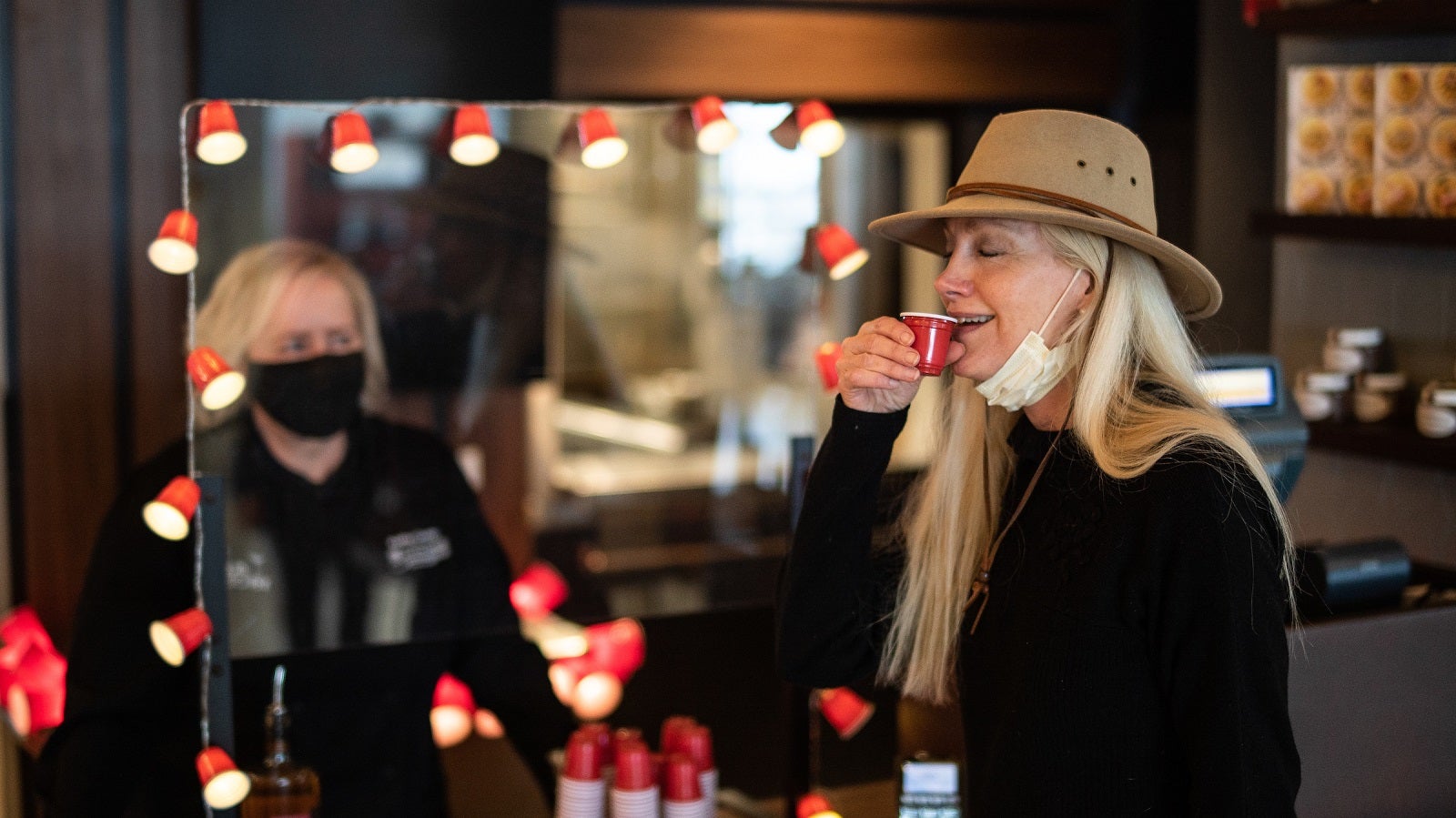 2021 was a challenging year for travel, with airlines and airports only recently welcoming back passengers at close to pre-pandemic numbers. Airports everywhere continue to focus on keeping terminals sanitized and travelers safe.

But during 2021 many airports were able to offer some fresh amenities as well. Here is a round-up of some of the best ones we spotted. Feel free to drop us a note about any we’ve missed.

In March, many airport bars were still closed, or only open for limited occupancy. That’s when celebrity chef Kathy Casey, operator of several food and beverage locations at Seattle-Tacoma International Airport (SEA), set up a pop-up counter serving liquor shots. Named, appropriately enough, Shot Bar, and billed as the first shot bar concept in a U.S. airport, the bar served liquor shots in tiny red Solo cups to walk-up customers. The concept is set to return to SEA this summer.

In October, Philadelphia International Airport (PHL) began handing out free yoga mats to passengers on what have been dubbed Wellness Wednesdays.

PHL had originally purchased 1,500 mats to give to passengers who had to stay in the airport overnight due to weather, cancellations or delays, says Leah Douglas, PHL's director of guest experience, "but now airlines proactively reschedule flights prior to weather incidents, and this lessens the number of passengers who experience overnight stays at PHL.”

Douglas and her team decided to repurpose the mats and, so far, have handed out about 700 free yoga mats to travelers. “Passengers are loving the giveaway and we have definitely met our goal to surprise and delight them,” says Douglas.

Everyone hates standing in long airport security checkpoint lines. Now, travelers who don’t have TSA PreCheck or Clear to expedite the process can make a reservation to go through the security checkpoint at a handful of U.S. airports. SEA began testing its checkpoint reservation system, called SEA Spot Saver, in May, making it a permanent amenity in September. Now similar programs are offered at Newark (EWR), Los Angeles (LAX), Dallas (DFW) and several other airports.

Related: There’s a new way to get through TSA screening faster. But do you need it?

During the pandemic, many airports rolled out mobile apps to allow passengers to order food and retail items for contactless pickup or delivery at the gate. In February, the mobile ordering service At Your Gate began pairing its human delivery teams with cargo-carrying "Gita" robots that have since been spotted in more than half a dozen airports.

During 2021, Portland International Airport (PDX) got very creative with finding ways to let passengers know about all the terminal construction underway, the detours to be endured and the great design that would soon emerge. To help tell the story, PDX had Oregon-based artist Aki Ruiz and writer JD Shadel create a comic.

The Visitor Toll Pass program at Orlando International Airport (MCO) was technically born in 2019. But it was paused during the pandemic, totally revamped and reborn in a much better form in June 2021. The program helps Orlando visitors avoid having to rent toll payment transponders from rental car agencies that levy exorbitant fees. Instead, visitors use an app to reserve a loaner toll pass that is dispensed at an airport kiosk and only charges in-state, electronic pass toll rates.

Airports around the country also did a great job this year of celebrating their communities and having some fun.

More than 80 dogs — and one cat — serve on the Canine Airport Therapy Squad (also known as CATS) at Denver International Airport (DEN). And many highly trained dogs also serve on the airport’s K-9 bomb-sniffing team. So, on April 1, when DEN announced that a llama named Matilda would soon start working alongside official K-9s in luggage-checking procedures, it seemed plausible. DEN noted that “llamas are social and gentle animals. Their noses are 6 times more powerful than dogs’ and they can learn tasks after little repetition – making them perfect to check luggage.”

The airport later noted that April 1 is April Fools’ Day.

On April 15, many airports marked World Art Day by showing off pieces from their permanent art collection.

In May, during a Red Bull “Terminal Takeover,” a crew of skateboarders from five different cities held a competitive skate jam in the old, unused Louis Armstrong New Orleans International Airport (MSY) terminal.

And on May 4, many airports shared “May the 4th be with you” messages on Star Wars Day.

Featured image by (Photo courtesy of Port of Seattle/SEA Airport)
Editorial disclaimer: Opinions expressed here are the author’s alone, not those of any bank, credit card issuer, airline or hotel chain, and have not been reviewed, approved or otherwise endorsed by any of these entities.