Articles
Summer Hull , aka Mommy Points, ran the Mommy Points site for families who want to travel more for less using miles and points for seven years. She now heads up a variety of special projects at TPG when she isn't exploring the world with her own two girls.
Follow
Oct. 18, 2019
•
8 min read 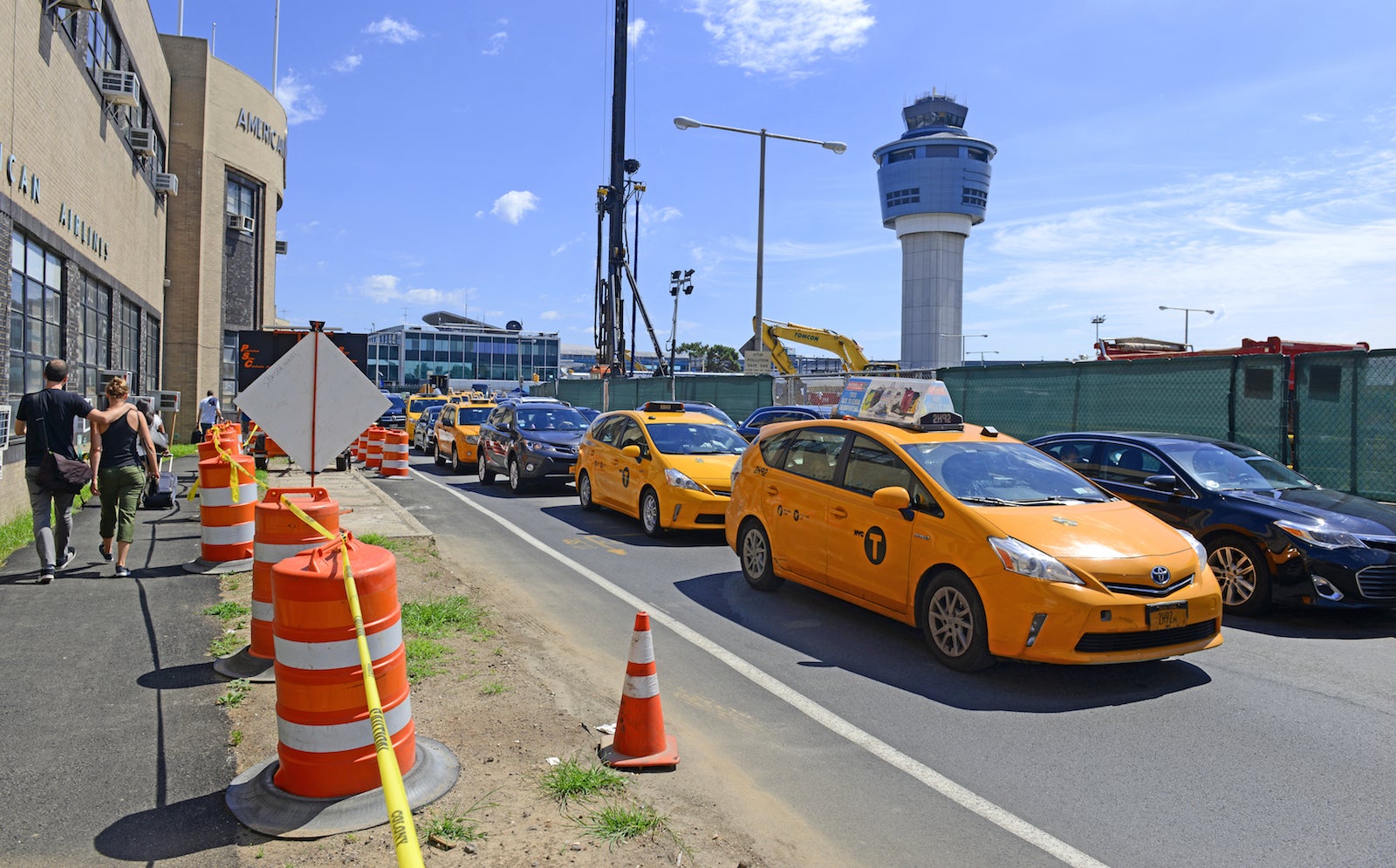 Leaving LaGuardia by car may take longer than your flight to NYC
This post contains references to products from one or more of our advertisers. We may receive compensation when you click on links to those products. Terms apply to the offers listed on this page. For an explanation of our Advertising Policy, visit this page.

"I live at LaGuardia now."

That's what I texted friends whom I was scheduled to join in Manhattan for (a now very delayed) dinner after about an hour and half trying to leave LaGuardia. I was no closer to warm, spicy Korean food than I was to baggage claim.

When you fly into New York City, you often have choices not only when it comes to airlines, but also airports. There's JFK in the south part of Queens, Newark (EWR) — a train ride away in New Jersey — and LaGuardia (LGA) in a portion of Queens that is very close to Manhattan.

This time, I chose LaGuardia, and it was the wrong choice. But it's not just me and my own bad luck -- with the current construction and congestion, getting into or out of LaGuardia can take more time than your flight. In fact, you may find yourself wondering if you have entered some weird airport version of an "escape room" where you have to find your way out before you breathe in too much car exhaust.

In my case, it took 90 minutes from the time I left Terminal B on Wednesday to walk to the nearby Uber pick-up area; meet my driver; and for the Uber to actually leave the grounds of LaGuardia. It would be another hour in the car before I reached my destination in Manhattan. And the 90 minutes I spent waiting for a ride were nothing short of chaotic, complete with almost constant horn honking in a parking garage that's filled with exhaust fumes, confused travelers and has very little cell reception.

TPG has a helpful guide to getting an Uber, cab and Lyft at LaGuardia's various terminals during construction, but I'm here to tell you that knowing how to functionally get a ride out of the airport and knowing how long it will take are two very different tales that depend on everything from the weather, to the time of day, day of the week, which terminal you're in and which way the wind is blowing.

Unlike Newark or JFK, there is no train or subway option available directly from LaGuardia. Sure, you can take the M60 bus to a subway stop several miles away, but at night, in a hurry, and in the rain, that hardly sounded fun or efficient.

When I requested an Uber into Manhattan from the app, it initially said the driver was about 10 minutes out. Without gridlocked traffic, I'm sure that would have been true, but the airport was so congested that it took 70 minutes before the Uber traveled the short distance to the pick-up area. It took another 20 minutes to get out of the garage and onto the main road.

On the same night, a coworker said it took her four hours to try and get from Manhattan to LaGuardia, with much of that time spent in the vicinity of the airport. She missed her flight. Another colleague reported having to get dropped off on the opposite side of the highway from LaGuardia twice in recent months, as getting into the airport proved almost impossible thanks to gridlock.

So, with all of this drama happening outside LaGuardia, what are your best options?

OK, this may sound extreme, but had I just flown into Newark and taken the train into Manhattan, I would have saved at least an hour -- maybe two -- despite the fact that it's technically in a different state. Right now, if you don't want to roll the dice on what LaGuardia will be like when you arrive, choose another area airport, especially if you're arriving or departing in the evenings, around rush hour.

This may not help you get into LaGuardia any faster, but having a prearranged car service may help you avoid the ride-hailing nightmare in the aforementioned parking garage, which has probably played a role in more than a few horror movies. I'm personally a fan of Groundlink, especially since you can book car seats online, but any car service would be better than standing over an hour in the garage. Look for Amex Offers to save you some money if you do use Groundlink.

I can't verify this with personal experience, but a day after my Uber LGA excitement, I got an email from Uber saying that Uber Black works differently at LaGuardia's Terminal B. It uses a six-digit PIN code system where you just request an Uber Black, join the line in the garage and give the PIN to the first available driver. I bet that system isn't perfect, as it's still a traffic jam in a garage at a notoriously crowded airport, but it is likely more efficient than the Uber X situation.

While each terminal at LaGuardia operates differently in this respect, it could have been faster to take a five-minute shuttle bus ride to the taxi area out of Terminal B. I didn't know that since Uber's app said it would just be 10 minutes until I was picked up. Or maybe the bus party is over and cabs are available without taking a shuttle. The messages are mixed. No one really knows the situation at Terminal B, but that's part of the fun!

Hear me out, because it's not necessarily as reserved for the rich and famous as it sounds. BLADE now offers continuous helicopter service to all three New York City-area airports, including LaGuardia (from 8 a.m. to 5 p.m.). A seat on a BLADE helicopter flight between downtown Manhattan and LaGuardia in either direction is $195 each way, however that number drops to $145 with the referral code BRIANF&F. Here's a full review of BLADE and details on the booking process.

And sure, LaGuardia has its strengths. There's an Amex Centurion Lounge you can access with The Platinum Card® from American Express, and the new part of Terminal B is quite nice. On a good day (and yeah, there aren't many right now) it may be the closest airport to Midtown Manhattan.

However, there are reasons it ranked 45 out of 50 on TPG's best and worst U.S. airlines list earlier this year, the lowest position of any New York City-area airport.

I will personally try and avoid LaGuardia on my next trip to New York City, especially if I'm arriving in the early evening. If that becomes unavoidable for some reason, I will likely arrange a car service ahead of time — and I strongly recommend you plot your route in and out of the area carefully as well. Unless, of course, you like standing around in loud parking garages with hordes of angry travelers for longer than it took you to fly to the Empire State in the first place.

In which case, congratulations. Welcome to LaGuardia — it's your home now, too.

Update: An earlier version of this story incorrectly had JFK listed as being in Brooklyn. Our NYC geographic sin has been corrected.

Related stories
Legislation that could gut credit card rewards set to move through Congress
Would you stay at 1 of these 8 haunted hotels this Halloween?
Southwest winter flash sale: Get one-way flights for as low as $29
You can currently buy points and miles with up to a 100% bonus — but should you?
Featured image by (Photo by Robert Cicchetti/Shutterstock)
Editorial disclaimer: Opinions expressed here are the author’s alone, not those of any bank, credit card issuer, airline or hotel chain, and have not been reviewed, approved or otherwise endorsed by any of these entities.