The Fastest Way to Get From JFK to Manhattan 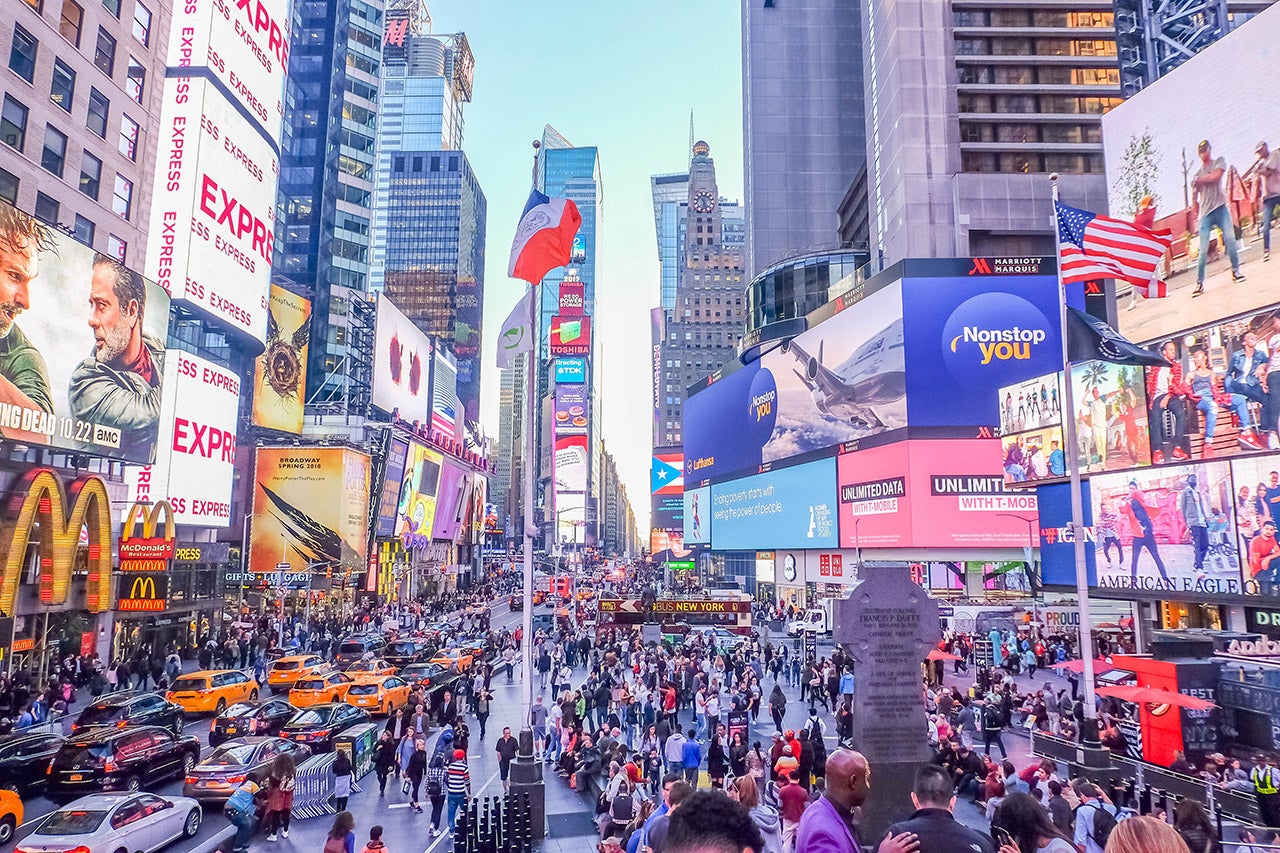 You've just landed at JFK, bright-eyed and bushy-tailed, ready for a long weekend in New York City. But more than anything, you're likely ready to be at your final destination after a long day of traveling. There are plenty of options for getting from JFK to your hotel or Airbnb, but which is the fastest?

The good news is you have options. Depending on whether or not cost is a factor and to which part of the city you're headed (and how much luggage you have), it can be as easy as getting in a car or might unfortunately involve a transfer or two. Either way, getting to your destination doesn't have to be headache-inducing as long as you do a little planning ahead.

Here are the fastest ways to get from JFK to Manhattan.

Because a long taxi queue can set you back a good half hour if you're deep in line, the proliferation of rideshare apps has been a godsend when it comes to getting from any of the New York-area airports really to the city. There is a flat fee of $52 not including tolls or tips if you grab a taxi, and an Uber or Lyft will likely cost $65+, depending on surge pricing so make sure to look at fares closely before booking. (The app Bellhop lets you easily compare rideshare services all in one place.) You can certainly drive that price down by opting for a shared vehicle, but expect significant time to be added to your trip as not enough people use the pool option yet to make it efficient.

The obvious wild card here is traffic. JFK is about 17 miles from Times Square, and the trip by car is likely to take 45 minutes to an hour. If you are arriving in the morning hours during the week when commuter traffic is at its worst, you are looking at closer to an hour to an hour and a half.

That said, if you have the time and the money, jumping in a car is one of the easier options — especially if you have a travel companion(s) to split the bill with.

Unfortunately none of New York's subway lines will get you from JFK to Manhattan door-to-door, but with the help of the AirTrain you can get yourself into the city (both run 24/7). The cost of an AirTrain ticket is $5 one-way and the subway ride is a flat fee of $2.75. (A new MTA card will cost $1, so remember to hang on to it for the duration of your trip.)

From the AirTrain, which is about a 20-minute ride depending on your terminal and final stop, passengers have multiple subway options. If you're heading to Times Square, jump on the E line, which will take a little more than an hour to get you there. All together, you're looking at an hour and a half trip.

While the main perk of the train (besides the people watching) is that you'll avoid car traffic, as any New Yorker will tell you there's a good chance your train might get delayed. Usually, these delays only last a few minutes, but they can happen, so pad your schedule according.

In addition to jumping on the subway from the AirTrain, you also have the option of catching the LIRR, which is one of the city's commuter rails. This train is a step up from the MTA and thusly will cost $10.25 for a ticket from JFK to Penn Station, which will get you closest to Times Square. It's also a direct shot, only taking 35 minutes once you're on the LIRR to get into the city. With the 15-minute ride on the AirTrain it's about 50 minutes total from Point A to B.

Depending on your final destination, you can jump on the subway right in Penn Station to take you the rest of the way for the aforementioned $2.75, grab a cab, or you can hoof it if you're brave.

There is a shuttle bus that runs from JFK and drops passengers off at either Grand Central Station or Port Authority from 11am until 7pm for those on a budget but not yet ready to navigate the subway. Called the NYC Express Bus, tickets will run you $19 each way or $35 for a round-trip ticket, and you're looking at the same timing as it takes to travel by car, 45 minutes to an hour depending on traffic, minus the custom drop-off service.

Jump on the subway at either stop to take you the rest of the way, practice your taxi-hailing skills, or walk it from there.

If money is no object, BLADE is one of the quickest ways to get from JFK to Manhattan and also doubles as a free sight-seeing activity (check out our BLADE review here). Wave to all the suckers below stuck on the subway or in traffic as you fly from the airport to the city in 5 minutes (that's FIVE) for the low, low price of $195 one-way. Even with the quick flight time, it's forty minutes between airport and city. Your drop-off point will be along the West Side Highway in Midtown, presumably where you will jump into an UberXL that will whisk you off to a very fancy hotel. Ah, to be rich!

Photo by Cris Tagupa on Unsplash

Featured image by Photo by Cris Tagupa on Unsplash