Your guide to taxis, Ubers, Lyfts and Via during LaGuardia Airport's construction

Articles
Jordan Allen has produced content for TPG on everything from travel trends to flight deals.
Follow
Nov. 25, 2019
•
8 min read 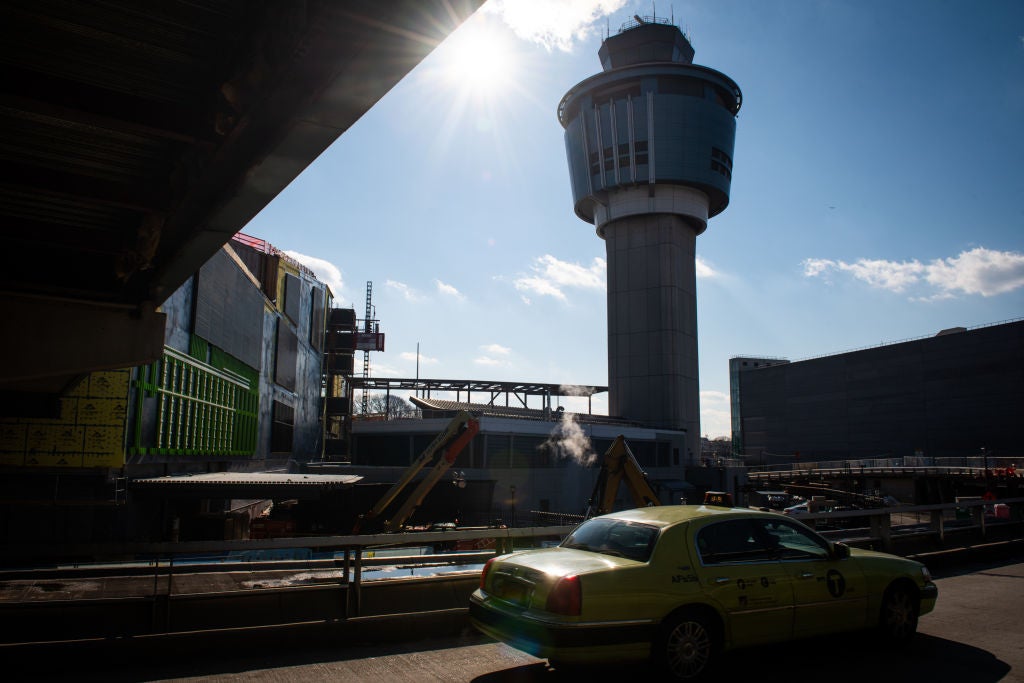 Your guide to taxis, Ubers, Lyfts and Via during LaGuardia Airport's construction
This post contains references to products from one or more of our advertisers. We may receive compensation when you click on links to those products. Terms apply to the offers listed on this page. For an explanation of our Advertising Policy, visit this page.

New York's LaGuardia Airport has become, lately, even more synonymous with "traffic jam." Due to ongoing construction, LGA has recently been in the news for a lot of wrong reasons: snaking lines for taxis, confusing Uber and Lyft pickup spots, congestion that makes leaving the airport often as painful as getting there.

Consistently ranked among the worst airports in America, LaGuardia is in dire need of those renovations. With 31 million passengers a year using the airport, you might very well be among those having to navigate what amounts to a giant building site that also features airplanes.

So, because it's best to have a plan before calling your Uber, Lyft or cab home, here is your guide to leaving LaGuardia Airport via ride-hailing services or taxi.

Before things get really jumbled and messy, let's discuss the simplicity of the Marine Terminal, or Terminal A. Construction-free, newly renovated, and incredibly easy to navigate, Terminal A is home to just a few flights, by JetBlue, so you won't have much trouble getting out of there. It has its own taxi stand with all the yellow cabs lined up right out front. A For Hire Vehicles (FHV) area is also just outside the exit doors.

There isn't much else to say here. It's tumbleweed-in-the-desert-quiet over at Terminal A.

So, if you are booked through Terminal A, enjoy it. Because the rest of the airport is not like it.

Ok, here we go. Welcome to the parking garage, the place for all ride-hailing pickups in this terminal. And yes, that sounds daunting, but Terminal B isn't the worst if you know what you're doing.

Those using an app-based car service have two paths they can use to get to the parking garage where the Ubers, Lyfts, Vias, etc. will be waiting for pickups. There's the covered pedestrian bridge — which is on the second level of the Terminal with departures — located right outside the American Airlines ticket counters. Exit the terminal and turn right and keep walking. See below for how that looks.

However, if you, like me, decided to hail a ride from the ground floor at arrivals — where a majority of arriving travelers leaving the airport are — things get a bit complicated. Heading in the same direction as the covered pedestrian bridge, you're going to follow a series of signs, past the taxi stand, to an area that looks like you're not really supposed to be there.

But don't worry, you are. From there you'll take an elevator up to the second floor and bam, you're at the pickup lot.

Generally, the attitude from those using a ride-hailing app was positive. People got it right away — two women from out of town could be heard quietly praising the system to each other calling it "easy" and "nice." But, a few feet from them, an airport staff member was helping another customer figure out how to call Uber to the terminal on her phone.

Uber and Lyft now both use a pin code system to help speed things along in finding your ride. Lyft uses a four-digit code and directions to the Terminal B Garage Area G, where a "Lyft ambassador" will be waiting. Then, passengers will wait in a line until it is their turn. Show your code to your driver, and you're on your way. Uber has a similar system, using a six-digit code. Once you've received that, you'll walk to the designated Uber pickup zone, join the line and then give your pin to the first available driver.

If you don't have a pickup code or are using other services, your driver will send you a letter and a number (i.e. H7) that'll coordinate with a sign to indicate their exact location inside of the garage.

Last, if you do choose to order a car from Terminal B (or, really anywhere) make sure you remain respectful and communicate with your driver. Also, we suggest that you don't call your ride-hailing service of choice until you're closer than a five-minute walk to the garage, so your car won't cancel on you.

Loyal to the yellow cab? If you want to use a taxi, the stand can be accessed via the doors at the farthest-west point of the arrivals level.

Earlier in 2019, you would have had to wait in a line to take you to the taxi shuttle, which would take customers on a five-minute bus ride to the taxi lot.

However, the cabs are now back! You just have to wait in line for your ride home, just like at most other airports.

We're grouping these two terminals together because they're connected and follow the same guidelines.

The Port Authority of New York and New Jersey, which operates the airport, has set up a mini tent city between Terminals C and D. This covered parking lot is where you will find your Uber or Lyft.

If exiting Terminal C, head to the left and keep walking toward Terminal D.

If exiting Terminal D, head to the right and keep walking toward Terminal C.

But I'm sure you're wondering — where on earth will this lead you?

First: due to construction, the road narrows into a single lane in this area. This is likely why the other Uber driver I spoke with told me that Terminals C and D were, in his opinion, the worst spots for pickups and drop-offs.

This really isn't that hard to navigate either, but I did see the highest concentration of confused passengers here. A couple even approached me for directions on how to find their Uber in the tented section. I referred them to one of the many LaGuardia employees standing by to help out.

Also, know that when you call your Uber, like in Terminal B, they're going to give you a letter and a number that will correspond with a sign to indicate their exact location.

Passengers arriving in Terminals C and D can also take a shared Via for a flat $15 rate to any destination in Manhattan, Brooklyn or Queens. Riders using that service will be automatically matched with others heading to a similar location and dropped off at a central location, within walking distance of their final destination.

Cab riders at Terminals C and D don't have it easy either.

They now need to hop on a shuttle bus. Look out for the taxi shuttle, located across the street in a sectioned-off area from Terminal C, along with the inter-terminal buses, the purple line (which goes to Terminals B, C and D) and the red line (Terminals A, C and D). If you're in Terminal D, you'll have to first make your way east to Terminal C after crossing the "frontage sidewalk" to get to the shuttle. Then, enjoy the bus ride until you arrive at the taxi loading zone where a dispatcher will assist you to the first available cab once you arrive.

On repeated visits, I found a large number of cabs waiting.

Also, if someone at any of the terminals offers you a cab ride, do not take it. Soliciting rides away from the designated taxi areas is illegal and will likely result in you getting scammed.

Some other things you should keep in mind about cabbing from the airport is the additional fees. From 4 p.m. to 8 p.m. on weekdays, there is a $1.00 "peak" surcharge as well as a $.50 surcharge for trips from 8 p.m. to 6 a.m. daily and a New York State tax of $.50 added to trips within the state. The meter must also read $3.00 at the beginning of any trip from a New York City-area airport.