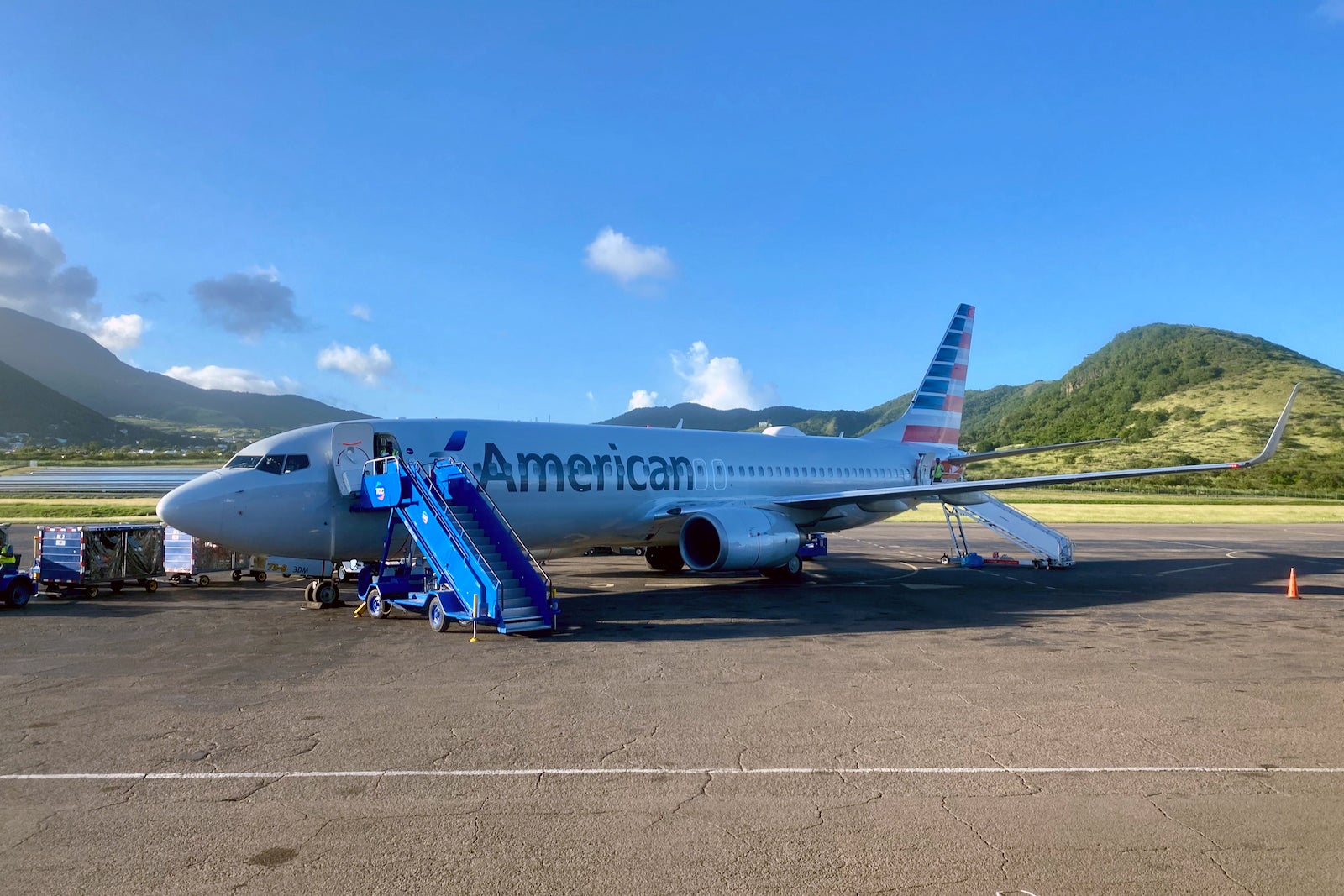 This post has been updated to show the start date for Platinum Pros to begin receiving "Emerald" Oneworld benefits.

The next time you hit top-tier status with American Airlines, you'll be rewarded with a slew of new benefits.

Well, we now have the details — and it's an exciting development for AAdvantage members. As part of the news, American is also improving Platinum Pro status, so let's dive into the details.

When members earn Platinum Pro or Executive Platinum status in 2021 and beyond, they'll get a pick from a new catalog of reward options.

Previously, there was no choice — all Executive Platinum members earned four systemwide upgrades upon qualifying for status.

The new menu, however, is designed to give everyone a pick at what they value most.

Platinum Pros get a single pick from one of the seven options. Executive Platinums get two choices from one of nine options — plus they'll get a pick from the Platinum Pro list along the way to top-tier status.

Once you qualify for status, you'll unlock your pick(s). You can then choose a reward anytime from the date you qualify all the way through Dec. 30 of the following year. (Note that it's Dec. 30, and not the last day of the year, Dec. 31.)

As you'll see below, it could make sense to wait to hold off on making your selection, depending on the expiration date of your chosen gift.

Once the new menus launch in 2021, you'll receive an email inviting you to make your selection. You'll also be able to choose and track your rewards from a new "Gifts and Rewards" section of your AAdvantage account.

Note that the existing Executive Platinum rewards for those who over-qualify for top-tier status will remain as a standalone program, an American spokesperson confirmed to TPG.

Now, let's take a look at each of the rewards menus, and discuss each gift, starting with systemwide upgrades.

As in the past, systemwide upgrades (SWUs) can be used to move from coach to business class or from business class to Flagship First on any flight operated by American.

2021 will be the first year that a Platinum Pro member can earn a systemwide upgrade — a notable improvement to this status level. Plus, Executive Platinum members don't need to choose four upgrades — they can choose two and then use their second pick for another reward.

SWUs will expire one year from the date of selection. You don't necessarily need to upgrade during that year, as an expiring SWU can be applied to future travel so long as there's upgrade space when using the certificate.

As such, if you're planning to pick SWUs as your gift, be sure to hold off on redeeming your pick until you have a flight that's available for upgrade.

Related: How to use American systemwide upgrades

Both Platinum Pro and Executive Platinum members have a choice of receiving a lump sum of AAdvantage miles when qualifying for status.

Note that if you're a co-branded credit cardholder you'll enjoy an additional 5,000 miles bonus (worth $70) on top of the lump-sum distribution.

The carrier confirmed to TPG that this discount applies to any type of award ticket, including revenue-based Web Specials, with no maximum on how much you can save.

Note that the discount will be applied post-travel as a rebate, for up to two passengers traveling round-trip.

As such, if you're planning to redeem an award that costs 133,000 miles or more, it definitely makes sense to choose the 15% discount, as opposed to the 20,000-mile lump-sum bonus.

One innovative reward option is carbon offsets. American is partnering with the non-profit Cool Effect to purchase offsets calculated based on your flight activity during the elite-qualifying year.

$200 donation to a partner charity

Flyers can also choose to gift a reward to one of ten non-profit organizations. American will send $200 to the partner non-profit of your choice, including programs like Feeding America and Stand Up To Cancer.

Platinum Pros can choose six single-day lounge passes (worth $354), while Executive Platinums can choose an individual Admirals Club membership (worth $550). Just note that the latter requires both picks from the top-tier catalog.

The passes and lounge membership expire at the end of the elite status membership year (Jan. 31, two years after qualifying for status),

The Admirals Club membership is tied to elite membership year (Jan. 31, two years after qualifying for status), so if you pick the lounge access gift, be sure to make your selection immediately upon earning status.

The day passes, on the other hand, are good for one year from the date selected.

Note that there are alternative ways to access the Admirals Club through co-branded credit cards. If you're itching for a key to the lounge, it could definitely make sense to open a credit card and select another, more exclusive pick from the rewards menu.

This one is pretty simple.

Both Platinum Pro and Executive Platinum members can select a $200 travel voucher to be used on any future American Airlines flight.

The lump-sum bonus miles are definitely worth more than the future travel voucher though. So, unless you rarely (or inefficiently) use your miles, it makes sense to stick with the 20,000 or 25,000 (or more) mile bonus.

Executive Platinums can choose to gift entry-level Gold status to another flyer.

TPG values AAdvantage Gold status at $930 (in a pre-pandemic world), so if you have a friend or family member who flies AA periodically, but not enough to earn status on their own, then this gift could be worthwhile.

Note that the gifted status will expire at the same time as the member — on Jan. 31, two years after qualifying. As such, once you hit status, be sure to make your pick at who gets the gold.

Starting in 2021, top-tier elites will have the choice of getting a little bit closer to requalifying.

Specifically, Executive Platinum members can choose 10,000 bonus Elite Qualifying Miles (EQMs) as one of their picks. Note that this is the only perk that can't be chosen twice.

In a "normal" year, this would give elites a 10% boost on the EQM track. I'd recommend waiting until the end of the year to see how close you get to requalifying through flying and co-branded card spend before using one of your picks on a 10,000-EQM boost.

Related: Everything you need to know about Elite Qualifying Miles

While many frequent flyers will likely choose a combination of the above picks, perhaps your employer pays for business-class seats and you're flush with miles for personal travel.

If that's the case, you might consider redeeming for a Bang & Olufsen headset, earbuds or speaker. These products regularly score rave reviews from customers (and TPG staff), so it's certainly not a lousy pick.

In addition to offering Platinum Pros a pick from the new rewards menu, AA's second-to-highest elite tier is also getting a big boost in terms of the corresponding Oneworld status.

Becoming Emerald means that Platinum Pros can enjoy a host of additional perks when flying with partner airlines, including first-class priority check-in, higher tier priority for waitlists and standby and fast track at security.

But perhaps the biggest, and most exciting, improvement is that Platinum Pros will be granted access to partner first-class lounges, even when flying in coach. This includes some award-winning spaces, like Cathay Pacific's The Pier and Qantas' First lounge in Singapore.

American Airlines is beginning the holiday season with great news for its top-tier elites.

Frequent flyers will have new rewards when hitting status goals, including the ability to earn five systemwide upgrades during a single year. Platinum Pros are also getting a noteworthy upgrade to Oneworld Emerald status.

As Platinum Pro inherits some once Executive Platinum-exclusive benefits, it's possible that American is working to further the gap between the two levels, perhaps by increasing the requirements to hit top-tier status down the road.

Anything is possible, but until then, Thursday's announcement represents great news overall to American Airlines' flyers.

Featured image by Photo by Zach Griff/The Points Guy
Editorial disclaimer: Opinions expressed here are the author’s alone, not those of any bank, credit card issuer, airline or hotel chain, and have not been reviewed, approved or otherwise endorsed by any of these entities.