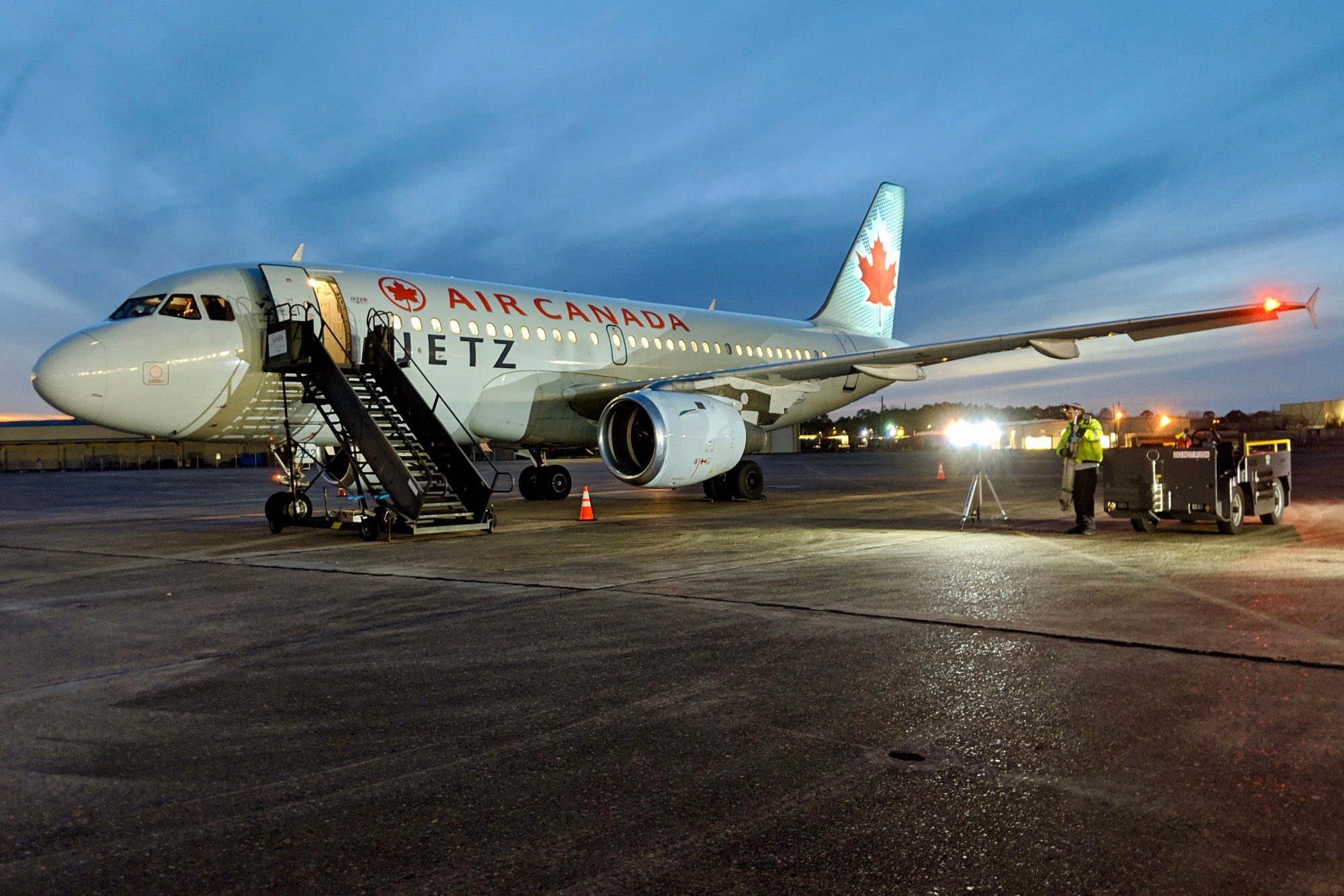 I Got to Fly Around North America Like a Pro Athlete on Air Canada’s VIP Jet
This post contains references to products from one or more of our advertisers. We may receive compensation when you click on links to those products. Terms apply to the offers listed on this page. For an explanation of our Advertising Policy, visit this page.

When Airbus sent out invitations to a special North America media tour focused on the A220, I was perhaps most excited for what I assumed would be an opportunity to experience the manufacturer's popular new single-aisle jet on an especially unusual route — from Montreal, Quebec, across the border to Columbus, Mississippi, and finally onto Mobile Downtown Airport, just feet away from the Airbus final assembly line in Alabama.

The A220s are in such high demand that there simply wasn't one available to fly us around North America. Airbus certainly landed on the next best thing, however...

Our charter aircraft was easily one of the highlights of the trip — the group traveled between the three Airbus facilities aboard a specially outfitted Air Canada Jetz A319, most often used to ferry Canadian hockey teams from one game to the next. Air Canada has three Jetz A319s, all with an identical all-business-class configuration, with one cabin of 58 recliner seats arranged in a 2-2 configuration. The fleet carries a large variety of customers, ranging from musical groups U2 and the Rolling Stones to a handful of Canadian NBA and NHL teams, such as the Toronto Raptors and the Vancouver Canucks.

Like I mentioned, Air Canada Jetz aren't available to just anyone — you need to charter an entire aircraft, and rates vary wildly depending on the origin and destination, number of passengers, catering options, time of flight and a number of other factors. Note that TPG does not accept free flights, except when there's a chance to participate in a unique experience that's not available to the flying public at large, such as this one. Here's what it was like spending several hours on board Air Canada's most exclusive plane.

One of the many advantages of chartering an entire aircraft is that you don't need to pass through the main passenger terminal. Unfortunately that wasn't an option on this trip — since there weren't immigration officers available at our first US stop in Columbus' Golden Triangle Regional Airport (GTR) we needed to use the US preclearance facility at Montréal–Pierre Elliott Trudeau International Airport (YUL).

We did have a more typical experience when returning to the aircraft in Columbus, though, with contracted security screeners processing passengers using manual searches and metal-detecting wands in a hangar, followed by a coach bus ride directly to the plane.

Back at YUL, I arrived at a special Airbus check-in desk right around 9am and was promptly handed a boarding pass and luggage tag, which I didn't need, since I only had carry-on bags.

Charter passengers were directed to the US preclearance area alongside customers traveling on commercial flights. Including security screening and a seamless Global Entry experience, I was through to the duty-free shop in just about five minutes.

With another 20 minutes or so to go until boarding, I decided to try my luck at Air Canada's Maple Leaf Lounge. My charter boarding pass didn't grant lounge access, unfortunately. Neither did Star Alliance Gold, via my United Premier 1K status. I wasn't ready to give up, though!

Finally, I asked about getting through with my United Club membership, a perk of the United Club Infinite Card. After reviewing an image of the card in my United app and entering my MileagePlus number, the agent let me in — still a bit confused as to how I was flying nonstop to Mississippi on an Air Canada flight that didn't appear on her computer.

This particular Maple Leaf Lounge hadn't been updated in years — hopefully Air Canada will give it a facelift to match the airline's newer aesthetic soon!

The lounge itself wasn't all that special, though I really liked the long gas fireplace — an absolute must during the winter months in Canada.

The views were hard to beat, too. This space definitely had potential.

I spotted our plane parked at Gate 75, just around the corner from the lounge. Our A319 actually looked fairly large compared to the other transborder aircraft flying from the US gates in Montreal.

On Board the All-Business-Class A319

There were 14 rows of four seats each, plus one extra row of two seats right behind the forward door. The cabin reminded me a bit of British Airways' sole A318, though I preferred the lie-flat seats on that transatlantic jet, of course.

With almost all of the passengers seated up front, I decided to grab a row all to myself in the back.

These were standard recliner seats — and the maximum recline was modest at best, as you can see below. There was a fold-out legrest as well, though I didn't find it to be especially useful, since it only extended a couple inches. I was comfortable in 14A overall, though, especially since the seats around me were completely free.

Our jet was stocked with plenty of amenities for the short flight.

Every seat had a large pillow, a comforter and a proper amenity kit, along with a bottle of water.

I've never received an amenity kit on such a short flight. I didn't find much use for the eye mask, earplugs or socks, but the dental set definitely came in handy at the next hotel.

Flight attendants also came through with a very slick "gift" — they seemed eager to see what was inside, so I'm guessing these don't often make their way to the Toronto Maple Leafs.

Ta da! A gigantic credit-card-and-passport wallet — a must for enthusiasts like The Points Guy.

We were also handed model helicopters after our midday stop in Mississippi — lots of goodies on this trip!

As for entertainment, there wasn't anything built into the seat, but crew members did come through the cabin with loaner iPads well into the first leg.

The selection was fairly up to date, with a total of 30 films, including "Crazy Rich Asians" and other new releases.

There was also Gogo Wi-Fi available free of charge throughout the flight. It actually dropped out at one point during the trip, but Air Canada Jetz has an engineer aboard all charter flights. On ours, Troy managed to get it back up and running quickly enough.

Unlike on a commercial flight, charter catering varies from one flight to the next. Customers can use Air Canada's suppliers or contract with local restaurants, if they prefer.

Airbus seemed to go all out — there wasn't any alcohol at all, though the company more than made up for that with the food spread.

We started with a mix of fruit, yogurt, smoothies, smoked meats and fish, pastries and hot breakfast sandwiches, all served buffet-style before the crew even closed the door.

I was pretty hungry, so I grabbed a bacon, egg and cheese sandwich and a smoothie.

That's when I noticed the menu — the gigantic breakfast spread was just an amuse-bouche, if you will!

For the main meal, we could choose among scrambled eggs with mushrooms, turkey sausage and hash browns; a pepper jack cheese omelet with hash, veggies and Canadian bacon; and French toast with chicken-and-apple sausage. I especially loved the mozzarella-and-tomato salad — an odd pairing at breakfast, perhaps, but I didn't mind one bit.

Finally, before landing at our first stop, the crew came through with chocolate-covered strawberries. Yum!

It was a simple thing, but the strawberry was such a nice touch that I think these should be a staple on long-haul flights!

We landed in Columbus a few minutes later, where we were bused directly to a generous Southern lunch at Airbus Helicopters' delivery facility. Despite all that, there was another service on the very short hop down to Mobile Downtown Airport (BFM), as well.

On that leg, options included warm cookies, crudites and assorted finger sandwiches. I wasn't at all hungry, but being in the last row, I grabbed a couple things anyway, given that the next stop was the garbage can.

Although there was more than enough food on this flight, the crew members did not bat an eye — they were used to serving athlete-sized portions, and apparently our spread didn't even come close.

The food was fantastic (and plentiful), the amenities and gifts were top-notch, and it's always a blast flying on an all-business-class plane, but it was definitely the four flight attendants who took the experience from excellent to outstanding.

Typically, three flight attendants work each Jetz flight, but ours had a fourth as well. They all have experience working regular Air Canada flights, and come over to the charter side for year-long stints, with the actual service length varying depending on which sports teams make the playoffs each season.

My guess is that Air Canada picks its most outgoing crew members for this assignment, given that they need to build rapport with some of the carrier's most important clients — including the hockey and basketball players they serve before and after every away game throughout each season.

Their interactions are generally limited to on board the plane, though. While flight attendants usually stay overnight before an away game, they're often at a different hotel and don't get to watch their customers play, since they begin getting the aircraft ready three hours before each postgame flight home.

The only real barrier to entry is the cost of getting on board — even a short charter is likely more expensive than a long-haul flight in Etihad's Residence, which will run you a whopping $24k between Abu Dhabi (AUH) and New York-JFK. Air Canada's charter rates are still likely far below those of some higher-end competitors, though, such as Deer Jet's 787-8 Dreamliner or Crystal Skye.

So, after a couple of flights, do I want to fly Air Canada Jetz again? Uhh, yeah ... absolutely. I just need dust off those hockey skates, or have someone invite me along for a ride.