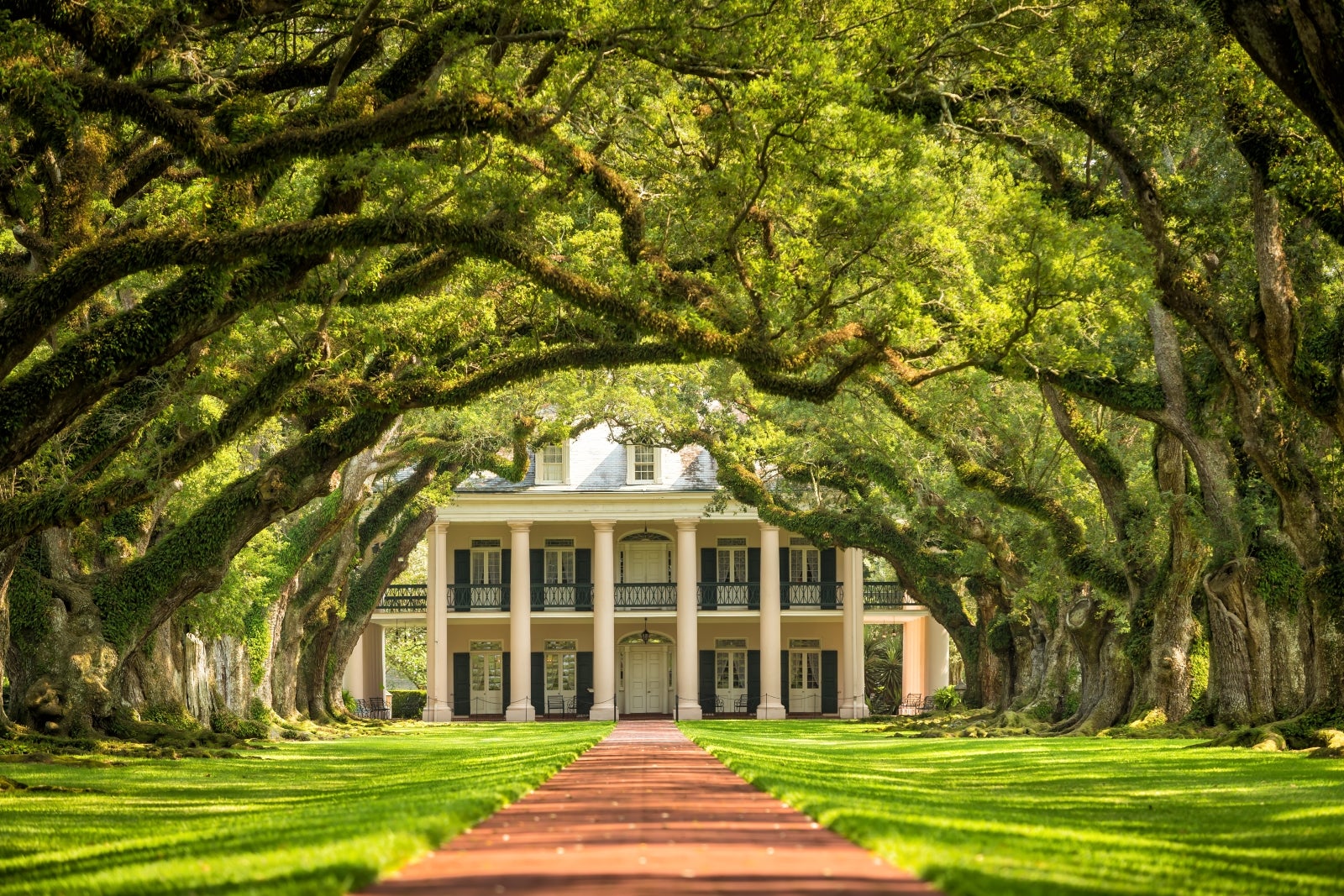 For anyone who doesn’t want to spend a night spooked in a haunted hotel, there are other options for getting your scare on this Halloween, especially for film buffs. From hiking to diners to cemeteries, we’ve put together a list of places where notable horror movies scenes were filmed, how to get there and where to stay.

Sure, you can go to Universal Studios and see a variety of film sets such as the classic “Psycho” but why not go off the beaten path? You can check out the Bronson Cave that appeared in the 1957 science fiction horror "Invasion of the Body Snatchers" as well as zombie movies “Army of Darkness” and "Cabin Fever.” The infamous cave is located at Griffith Park, one of the most popular hiking spots in Los Angeles, California.

Travelers across the U.S. and internationally can fly into Los Angeles International Airport (LAX). Airlines such as American, Delta, United, Virgin Atlantic, among many other major airlines have flights in and out of LAX.

If you're looking to earn more Marriott Bonvoy points, take a look at the Marriott Bonvoy Brilliant™ American Express® Card. The current welcome offer is 150,000 Marriott Bonvoy bonus points after you use your new card to make $5,000 in eligible purchases within the first three months of card membership.

Maybe hiking in the woods is scarier, especially if it’s the fictional Black Hills Forest from horror mockumentary "The Blair Witch Project." Some of the scenes were filmed at Seneca Creek State Park in Gaithersburg, Maryland. Explore these woods on your own but be sure to keep track of your map (even if it is on your phone), you don’t want to lose it as the characters did.

Gaithersburg is in Montgomery County, Maryland and the closest airport is Washington Dulles Airport (IAD) almost 19 miles from Gaithersburg. Other airport options include Ronald Regan Washington National Airport (RCA), which is 22 miles away, and Baltimore/Washington International Thurgood Marshall Airport (BWI) a bit farther at 29 miles away from Gaithersburg. Major airlines include American, United and Delta that fly in and out of all three airports.

If hiking isn’t your thing, then maybe take an eerie ride on the slopes where exterior scenes of the Overlook Hotel were shot for the opening of “The Shining.” The Timberline Lodge is in Mount Hood, Oregon, just in time for the start of ski season. Director Stanley Kubrick was asked not to depict Room 217 which was featured in the book "The Shining" because future guests at the Lodge might be afraid to stay there. Ironically, room 217 is requested more often than any other room, according to the Timberline Lodge official site.

Those looking to get to Mount Hood can fly into Portland International Airport (PDX) which is 34 miles away from the lodge. Airlines such as American, Delta, United, Southwest and Frontier Airlines have flights in and out of PDX.

Where to stay (other than Timberline Lodge)

Related: Would you stay at one of these 8 haunted hotels this Halloween?

The colossal, architecturally Gothic building in Manhattan, New York appeared in exterior shots in the 1968 film “Rosemary’s Baby.” On West 72 Street and Central Park West, the structure served at the fictional Bramford where the film’s Woodhouse Family lived. Many celebrities called The Dakota Home including Judy Garland, Yoko Ono and John Lennon.

Manhattan is served by three major airports. The closest is Laguardia Airport (LGA) about nine miles from Manhattan, John F. Kennedy International Airport (JFK) 17 miles out and Newark Liberty International Airport (EWR) in New Jersey about 18 miles away. Major airlines such as Delta, JetBlue, American and United Airlines offer many routes in and out of all three airports.

Related: 9 New York City hotels where you can use points

If all this hunting for spooky movie locations is making you hungry then you can head across the Hudson River to New Jersey. Located on Route 94 in Blairstown, New Jersey, Blairstown Diner is an actual place where you can grab a bite to eat, and is known fictionally as the Crystal Lake Diner in the movie “Friday the 13th.” According to a review on TripAdvisor, the diner even has a special menu for the date Friday 13. In another Jersey location where Jason Vorhees tortures his victims is the fictional Camp Crystal Lake. Don't be fooled by its beautiful fall foliage, in the film it's where some camp counselors met their fate at the hands of the hockey-masked murderer. To kids in New Jersey, it's known as Camp No-Be-Bo-Sco which sits on 380 acres of the Kittatinny Mountains.

The closest international airport near Camden, New Jersey is actually closer to Philadelphia, Pennsylvania than the main New York and New Jersey airports. The closest option is Northeast Philadelphia Airport (PHL) 20 miles from Camden. Delta, United, JetBlue and American Airlines have a number of routes in and out of the airport.

If you do happen to end up in Pennsylvania after a Crystal Lake Diner trip then you might as well check out the Evans City Cemetery in Evans City, Pennsylvania which was featured in “Night of the Living Dead.” Directed by George Romero, the classic 1968 zombie film featured the cemetery in its opening scene where viewers see the tombstone of Nicholas Kramer. Kramer was an actual person who lived from 1842 to 1917 and his grave still sits in the Evans City Cemetery.

The nearest airport is Pittsburgh International Airport (PIT) which is about 29 miles away from Evans City, Pennsylvania. Major airlines such as American, Delta and United Airlines have route options in and out of PIT.

There’s something majestic yet ominous about certain towns down South. While the history of plantations is haunting enough, Louisiana is home to the Oak Alley Plantation. Just an hour from New Orleans, it served as the home for vampire Louis de Pointe du Lac in the 1994 film adaptation of the Anne Rice novel “Interview with a Vampire.” In Vacherie, a small settlement in St. James Parish near the Mississippi River, it’s in between Baton Rouge and New Orleans. The expansive structure is now a restaurant and inn with an event space and public tours.

The nearest major airport to Vacherie, Louis Armstrong New Orleans International Airport (MSY), is approximately 45 miles away. Southwest and American Airlines, as well as other carriers, offer flights to MSY from gateways across America.

*Kimpton Hotel Fontenot is an American Express Hotel Collection property while The Ritz-Carlton is part of Amex's Fine Hotels + Resorts program. That means you can take advantage of the The Platinum Card® from American Express up to $200 prepaid hotel credit when booking either property through Amex Travel. The Hotel Collection bookings require a minimum two-night stay. Enrollment required.

The Steps – 'The Exorcist'

On a Washington, D.C. corner, it might look like a regular set of concrete stairs but to horror fans, it’s where one of the most climactic scenes from one of the most notable horror movies was filmed. Spoiler alert (like you haven’t seen “The Exorcist”): the memorable scene is where the character of Father Damien Karras meets Regan MacNeil’s demon, is possessed by it and then sacrifices himself and purges the demon, by jumping out of a window and falling down the long series of steps. The infamous set of stairs are on the corner of Prospect Street NW and 36 NW in Washington's Georgetown neighborhood.

The nearest airport to Georgetown is Ronald Reagan Washington National Airport (DCA). American Airlines is the largest carrier that serves the airport by the number of departures with Delta Airlines as the second-biggest carrier. United, JetBlue and Frontier Airlines also have a number of routes.

There are plenty of creepy destinations to go to for Halloween but these off the map locations are for the movie buffs driven by wanderlust. No matter which airline or hotel you earn your points with, you should be able to find a good option for flying and staying near these eerie destinations.

Related stories
Should you buy Marriott points with a 50% bonus?
5 secrets to getting a luxury cruise for less
Deal alert: Widespread Air Tahiti business class award space to French Polynesia
This no-annual-fee card earns 2% cash back on every purchase — and automatically applies your rewards
Featured image by Photo by f11photo/Shutterstock
Editorial disclaimer: Opinions expressed here are the author’s alone, not those of any bank, credit card issuer, airline or hotel chain, and have not been reviewed, approved or otherwise endorsed by any of these entities.