Articles
Melissa Klurman is a travel reporter and the winner of a Lowell Thomas Gold Award for travel writing.
Follow
Aug. 19, 2022
•
9 min read 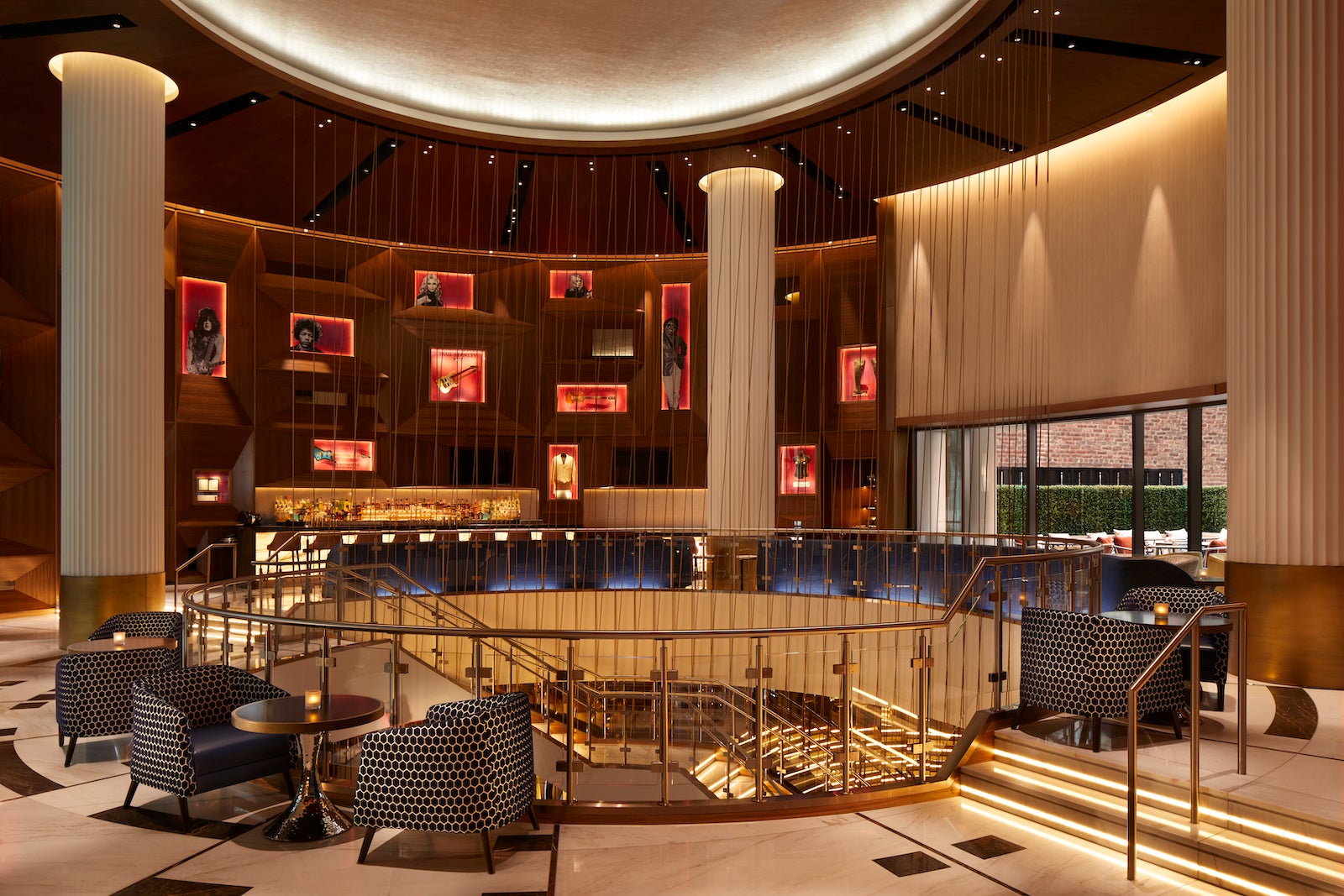 If you’re a parent, you know that traveling with a family requires a different mindset than heading out on a trip with just adults.

It’s not just about keeping the kids busy in the backseat or on a plane, although that’s an art form that’s important to master. At least equally important is finding a hotel that makes kids feel like they’re welcome guests.

Now add the entertainment and privacy needs of teens and it can feel like something of a circus high-wire act to find the perfect spot to stay.

All that's to say I approached my visit with my teen son to the Hard Rock Hotel New York with a bit of trepidation. We had tickets to a Broadway musical and I wanted to avoid a late-night commute back to my suburban home outside the city. So, I booked a night at the rock-inspired new hotel in the heart of the busiest thoroughfare in New York in Times Square.

Related: A beginners guide to New York City: Everything you need to know for your first trip

Happily, the Hard Rock turned out to be a glitzy oasis that doesn't necessarily promote itself as a rock 'n' roll fantasy for teens. That being said, it's definitely a teenage dream that emits a certain kind of swagger that draws in young adults. There's bling and swag around every corner, plush rooms that appeal to both "big kids" and adults, plus hotel spaces that offer space to spread out and be entertained without the chaotic crowds of Times Square.

And although my early July stay was prime summertime pricey at $600 a night, late August and early fall rates start at just $269.

Thinking about exploring the Big Apple with a teen or tween? Here’s what to know before you book a room at the Hard Rock Hotel New York.

Starting in the lobby and continuing all the way to the penthouse, every floor of the Hard Rock is adorned with rock 'n' roll memorabilia.

As soon as we entered the hotel, we were greeted by a golden gown once worn by Alicia Keys. Would I have preferred there to be an easy-to-locate check-in desk here? Sure. But who can argue with this level of walk-in glamour?

The check-in area (on the second floor, in case you were wondering) features lyrics handwritten by John Lennon. And by the elevators, outfits belonging to Queen Bey and Jay-Z.

Every floor of the hotel has a glass case with memorabilia — and the only way to see it is if you have a room key, since you can’t access room floors without one.

We accidentally went to Floor 32 (a Nicki Minaj corset — "That's kind of cool," admitted the teen) before landing at our 20th-floor destination featuring the New York Dolls ("Who?" was the reply I received for that one). You could spend a happy afternoon simply hopping between floors and checking out the swag while listening to the elevator's rocking soundtrack.

Gold records on the wall

Want to impress a teen? Show them a gold record. Want to really impress them? Show them an entire hallway filled with the shimmering discs. Insider tip: The fourth-floor "Audacy Live" is a recording studio/conference space you can’t access, but the halls are lined with dozens of gold records (and gold cassette tapes, who knew?) that you can get a close-up look at.

The rooms here were way more plush and well designed than I was expecting. And for midtown New York, these rooms are as spacious as they get. We've stayed in New York before in tiny rooms that barely held my 6-foot-4-inch son. Here though we had two queen-size beds (not doubles) and plenty of elbow room with more than 300 square feet of well-laid-out space.

Related: The best places for families to stay in New York City

Instead of a desk, there's a gold booth with floor-to-ceiling windows framing it so teens can munch in style. (I can attest that it's also a great setup for a Zoom call and there was plenty of photo taking going on — hello, Snapchat!).

No need to fight your teen to charge your electronics here. I counted nine Lightning cord ports in the room plus multiple outlets.

When we arrived, the massive flat-screen television in the room was tuned to a Tracks jukebox setting with a great New York mix that we could customize. An easy-to-activate Chromecast option allowed us to watch Netflix shows while we lazed on the big beds. And I was a fan of the sleek chrome Lavazza coffee maker, a definite step up from the average Keurig.

There are numerous attempts at music-based jokes and puns, and no chance to pass up the opportunity to imbue items with lyrics. From “Dirty Deeds” laundry bags to “b-sides”-emblazoned backup toilet paper rolls, there’s probably something that will grab your teen's attention, tickle their funny bone or, at the very least, make them roll their eyes, like mine did.

Related: 8 songs that will make you want to visit NYC

'Devil in the details'

You can spend days discovering all the tiny details that the Hard Rock has placed around rooms.

A few of our favorites: The white sheets actually have a guitar print when the light hits them. Each bed has one pillowcase with a small embroidered guitar. The spot where the door lock hits the wall is a guitar pick glued to the wall.

The coolest bathrooms in NYC

The bathroom door slides, instead of swings, so I missed this one at first: Our entire glass bathroom door was a photo of a mirror-bra-adorned Lady Gaga.

When the bathroom was lit and the room was dark, she glowed like she was on stage. One downside: I could not find the switch to turn her off, so Gaga glowed all night long.

Tip: The switch on the wall only makes the light brighter or dimmer. The on/off switch is across the room next to the sink. Why, Hard Rock, why?

I was impressed by the brushed-chrome fixtures and the rain-style shower heads which were tall enough to easily accommodate my towering teen. Extra points for individual Rock Spa toiletries, too, and the comfy kimono-style robes.

Related: 2 airport restrooms in the running to take the throne of America’s Best Restroom

There are multiple outdoor lounges on both the second and 36th floors. Since the hotel is at the center of the busiest thoroughfare in the city, it’s a great perk to eat breakfast or have an afternoon snack in what feels like a private outdoor garden.

The RT60 Rooftop Lounge on the 34th floor has outdoor areas on two sides with expansive Big Apple views.

Teens are drawn to the first-floor shop that’s equal parts Hard Rock bling and coffee bar, with plenty of treats for both shopaholics and sweets fanatics. We walked out with macaroons and ice coffee, but also with an eye to the vegan leather jacket hanging on the wall.

All-day dining at Sessions, which is adjacent to the check-in area on the second floor, offers everything from very expensive macaroni and cheese ($28) and burgers ($25) to entrees like salmon and steak.

I had a vodka-forward watermelon cocktail ($18), but we didn’t see any mocktails on the menu. Breakfast doesn’t have a buffet, per se, but a bread-and-pastry bar — choose two, and with fruit and a beverage, it’s $25. Don’t get me started on $8 unadorned breakfast bagels that a neighboring tween called out as "kind of crazy expensive" when he was ordering.

To be honest, we wished there was a fun Hard Rock Cafe outpost in the hotel. Instead, there's a ground-level New York Yankees-themed steakhouse that didn't quite tick our box for casual dining.

However, spotting table after table at Sessions occupied by parents with slouching teens happily munching fries, using their phones and also occasionally smiling at their parents confirmed what I thought as soon as we checked in. Whether they intended this outcome or not, the gleaming new Hard Rock outpost has "teen scene" written all over it.

Featured image by CHRIS SANDERS CHRIS-SANDERS.COM
Editorial disclaimer: Opinions expressed here are the author’s alone, not those of any bank, credit card issuer, airline or hotel chain, and have not been reviewed, approved or otherwise endorsed by any of these entities.