Articles
Tarah Chieffi is a family travel writer for TPG. Whether she’s sharing tips for planning the perfect theme park trip or finding a kid-friendly hotel, her goal with every story she writes is to inspire families to get out and explore the world.
Follow
April 01, 2022
•
11 min read 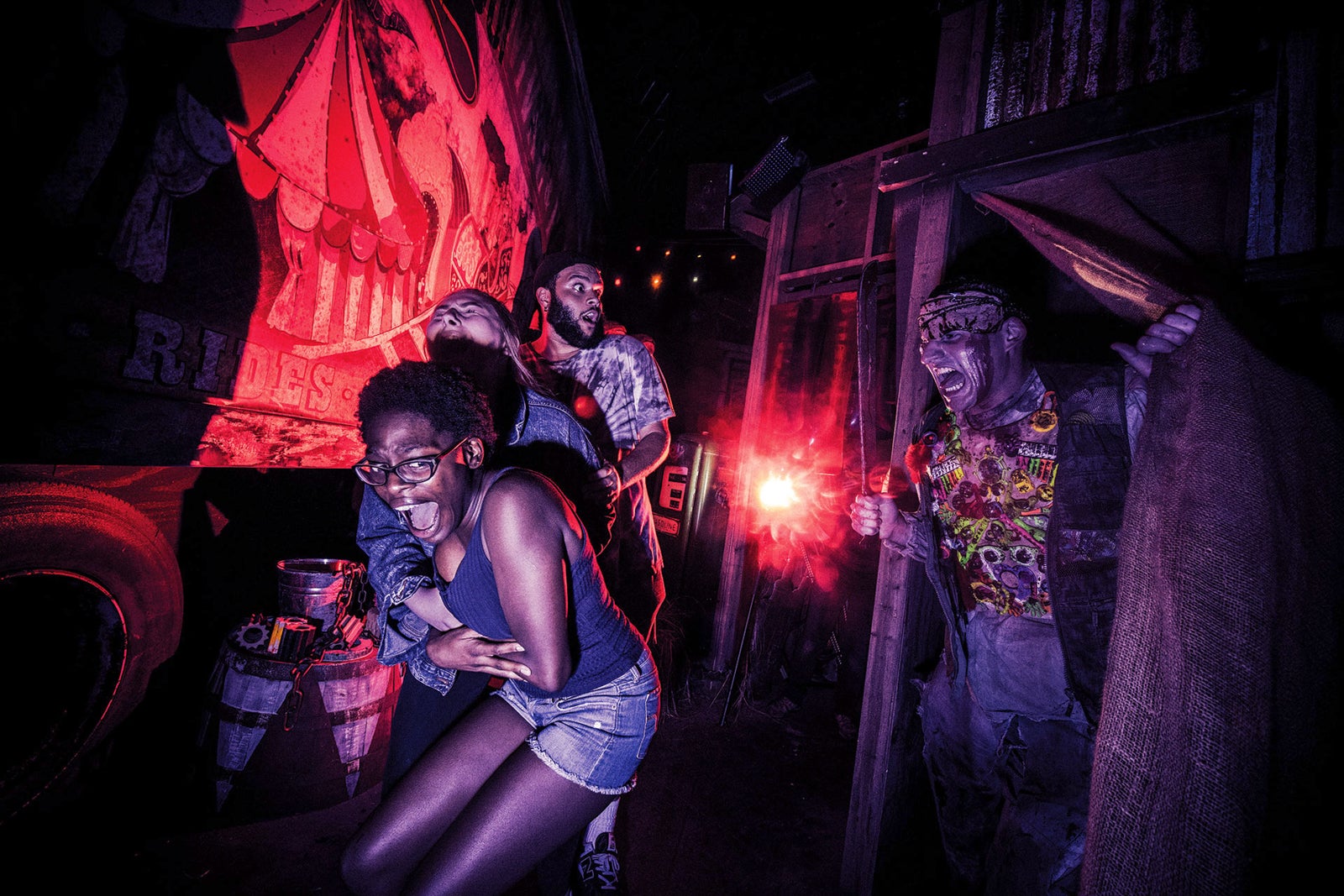 Universal has been a fixture in the world of monster movies since the 1930s, bringing fictional creations like the Wolf Man, Dracula and the Invisible Man to the big screen. These famous monsters have been a mainstay at Universal Orlando Resort since the park opened in Orlando in 1990, showing up in attractions like the Horror Make-Up Show and the Revenge of the Mummy coaster.

It only makes sense that Universal would drive full-throttle into the world of haunted attractions by turning their entire park into one. Universal Orlando's Halloween Horror Nights began as a three-night event in 1991 (hosted by none other than Beetlejuice himself) with just one haunted house.

Now in its 31st year, Halloween Horror Nights will run for a record-breaking 43 nights from Sept. 2 through Oct. 31, and if you want to get the socks scared right off your feet, you have to plan ahead. Popular dates, including opening weekend and Halloween, sell out early. You need to get your tickets now if you don't want to miss out.

Throughout the event's two-month run, guests can experience a more sinister side of Universal Orlando. The event is held in the dark of night after Universal Studios Florida closes to daytime guests and the haunted houses, outdoor scare zones and live shows serve as a terrifying counterpart to the family-friendly fun that Universal is otherwise known for.

There is no minimum age requirement for Halloween Horror Nights, but due to the intense nature and extreme gore, the event is not recommended for children under the age of 13. If you are considering bringing kids, use your best judgment on whether or not they are ready for this event.

Here's everything you need to know before exploring the darker side of Universal Orlando's Halloween Horror Nights.

This year, Halloween Horror Nights will take place on select nights between Sept. 2 and Oct. 31. The event is open every night of the week except Mondays, Tuesdays and, breaking from the pattern, Sept. 14.

The event begins at 6:30 every night and typically operates until 2 a.m.

This year, there will be 10 haunted houses at Universal's Halloween Horror Nights. "Universal Monsters: Legends Collide" is an all-new, original house that for the first time in HHN history finds Dracula, The Mummy and The Wolfman together seeking the same ancient relic in order to wield its power.

Fans of Michael Myers (the notoriously difficult-to-kill villain of the "Halloween" franchise) will be happy to learn that a house based on John Carpenter's iconic slasher film is joining the lineup. Ready or not, guests will come face-to-mask with Myers himself, likely more than once based on similar houses in previous years. This "eerily authentic" maze will "recreate the most chilling moments" from the original 1978 "Halloween" film, rather than leaning into the latest trilogy, which will conclude when "Halloween Ends" hits theaters on Oct. 14.

The houses are scattered throughout the park (don't worry, there is an event map in the Universal Orlando app), with some located in overflow queue areas for rides, some in real, working soundstages and others in large tents that don't look nearly as scary on the outside as they do on the inside.

Here is a full list of this year's haunted house lineup:

In addition to the haunted houses, Universal creates a series of outdoor scare zones throughout the park. This year there are five scare zones and there's pretty much no way to get around the park without facing the scare zones head-on.

"Scareactors" (it rhymes with "characters") roam around the scare zones looking for unwitting victims to frighten, but they aren't as scary as the houses. They are more likely to shoot you an evil glare or follow behind you a bit too closely, but they also won't hesitate to rev a chainsaw right in front of you if they think it'll make you jump.

Like the houses, each scare zone has a different theme. This year's scare zones include:

Single-night tickets for this year's event start at $73.99 per person, plus tax. Halloween Horror Nights is a separately ticketed event, so this doesn't get you daytime access to the parks.

If you do have a daytime ticket (or annual pass), Universal usually keeps small sections of the park open where you can have a drink and bite to eat while they "flip" the park for that night's festivities. You'll have the opportunity to be one of the first in line for the houses when the park reopens for the evening. You can also pay a bit extra to add on a "Scream Early" pass to get into the parks before the gates open to other HHN guests.

If you plan on visiting multiple times throughout the event, Universal also offers multinight passes.

If you do want to enjoy the parks during the day and at night, vacation packages are available that include hotel accommodations, park tickets and admission to Halloween Horror Nights. You can even use your hotel keycard to access a dedicated event entrance only for hotel guests and an immersive walkthrough experience at Universal's Cabana Bay Beach Resort.

Universal offers a variety of add-ons and upgrades for Halloween Horror Nights. These include:

When we say that Halloween Horror Nights takes over the entire park, we mean it. Aside from the haunted houses and scare zones, there are two live shows, themed food and drink booths and exclusive Halloween Horror Nights merchandise. Times for the live shows are available in the Universal Orlando app and you typically want to arrive at least 30 minutes prior to showtime to get a good spot.

How to get in early

If you have a daytime ticket, annual pass or the "Scream Early" add-on and a ticket for Halloween Horror Nights, you can typically take advantage of what is unofficially called "Stay and Scream." When the park closes for the day to regular guests, you can stay inside the park in designated "holding areas" to be one of the first in line for the haunted houses once the event starts for the evening.

If you don't typically do the haunted house thing, you may be wondering if you should even visit Universal Orlando during Halloween Horror Nights. If you aren't quite sure if you can handle it, there are still ways to enjoy the event. As we mentioned, the outdoor scare zones aren't quite as scary as the houses so it's a good way to tip-toe into the event. You can also spend your time playing carnival games, eating themed foods, riding roller coasters and watching the shows if you need a break from the houses.

Most of the merchandise can be found in the Halloween Horror Nights Tribute Store near the Revenge of the Mummy coaster. The store itself is a themed attraction, with multiple rooms filled with props and decor that make it feel like a haunted house without jump scares. You can purchase the requisite hats and T-shirts, along with specialty masks, art and memorabilia. There's also an entire room dedicated to spooky treats.

One of the most interesting things about Halloween Horror Nights is the original characters and fictional settings, both of which are well developed and seem to find their way into the event year after year. A knowledge of these characters and the tangled web of lore surrounding the event isn't necessary to enjoy it, but there are a number of articles on Universal Orlando's blog that go "behind the screams" of the event if you want to learn more.

We'll report back after the event ... if we survive.

Featured image by Roberto Gonzales
Editorial disclaimer: Opinions expressed here are the author’s alone, not those of any bank, credit card issuer, airline or hotel chain, and have not been reviewed, approved or otherwise endorsed by any of these entities.