Benét on the runway: How to eat locally at the airport 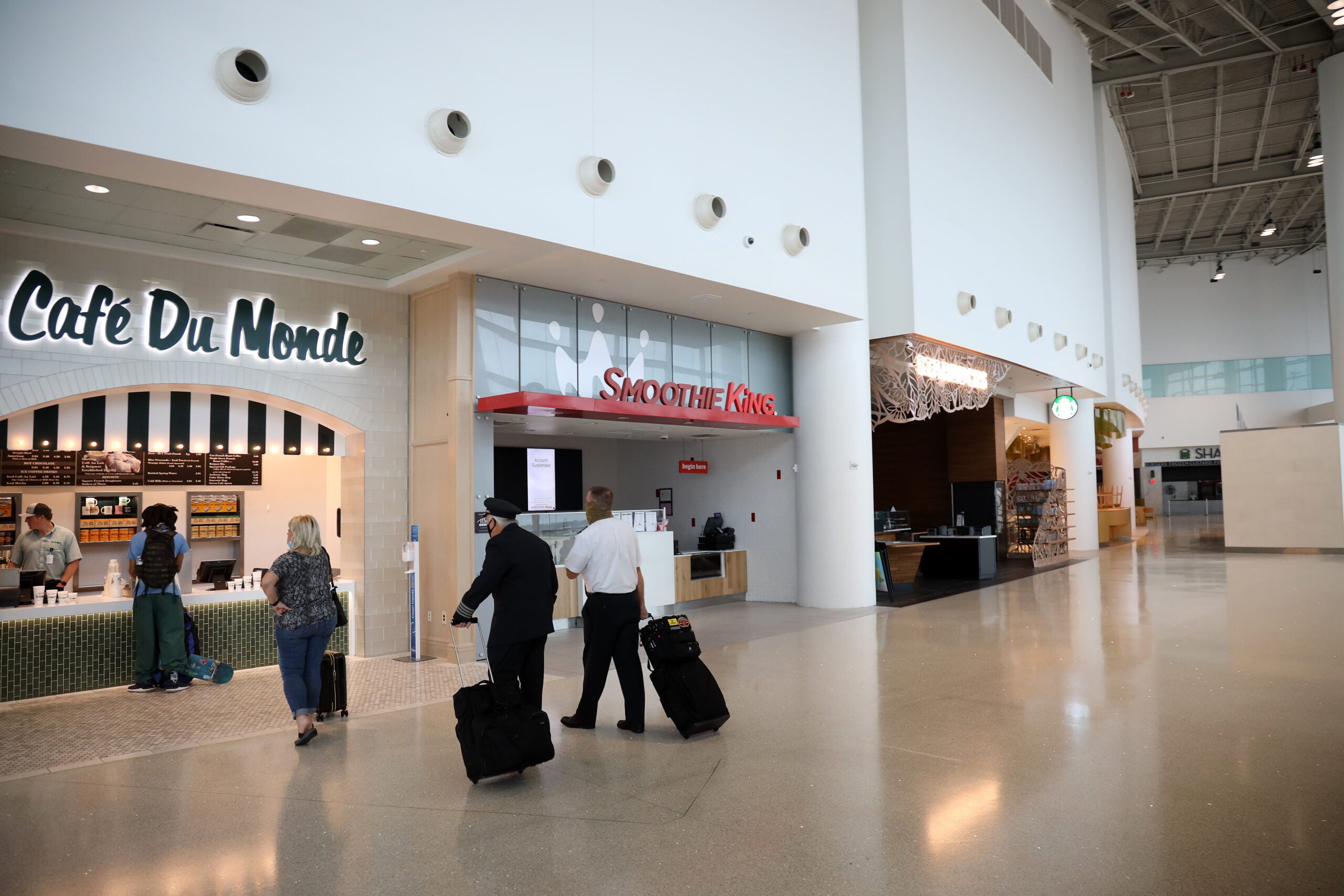 Editor’s note: This is a new column by senior editor Benét J. Wilson that will cover what's happening at the world's airports.

My child and I recently traveled to New Orleans for a quick work trip. They are a huge foodie and quite the budding chef, so I of course wanted them to experience all the food the Big Easy has to offer.

Because the trip was so quick, we didn't get the chance to do more than briefly sample all the city's food scene. But having done a sneak-peek story about the new Louis Armstrong New Orleans International Airport (MSY) terminal back in 2019, I knew that it was now home to a veritable who's who of city dining, including a restaurant called Leah's Kitchen. As the airport put it in its announcement:

Chef Leah Chase, who passed away in 2019 at the age of 97, was known as the "Queen of Creole Cooking" and was executive chef and co-owner of Dooky Chase's Restaurant. The airport worked with her family to create Leah's Kitchen, which serves many of the dishes she was known for, including fried chicken, from a space in the new terminal just past security.

Thanks to Leah's Kitchen, my child got to experience authentic New Orleans cuisine, including Chase's gumbo and jambalaya, at the airport.

If you know anything about Texas barbecue, you know that Salt Lick BBQ is one of the legendary places to get one of the state's official foods: barbecue. Lucky for you, there are outlets at Austin-Bergstrom International Airport (AUS) and Dallas Fort Worth International Airport (DFW) that you can follow your nose to. In case you need clearer directions, head to the Barbara Jordan Terminal between gates 20 and 21 to find the Austin, Texas, airport outlet.

My Texas roots don't allow me to get anything but the sausage and the brisket. Other options include pulled pork and turkey. Don't miss out on sides like potato salad, cole slaw, beans with brisket pieces and potato chips. When I still lived in Baltimore, I'd not only enjoy a brisket sandwich with beans and a soda ($21.99) before my flight out of Austin, but I'd also bring a freezer bag to take a barbecue sampler platter of brisket and sausage ($24.99) home with me. The platter is a great way to get a taste of all the meats.

I used to spend my childhood summers in the Bay Area. Because my maternal grandfather lived in Napa Valley, we were up there regularly for visits. One of my favorite places to eat was Mustards Grill in Napa, California, a local spot known for serving what it calls "deluxe truck stop classics" and wines from the area's vineyards. It's also considered one of the first farm-to-table restaurants in the U.S. I always stop in for a meal when I'm visiting family in the Bay Area.

Mustards Bar & Grill now has a spot in San Francisco International Airport (SFO)'s International Terminal G near gate G3. The restaurant has the same feel as the Napa location, right down to the wood-fired grill. I'm a creature of habit, so I always get the half-pound, all-natural cheeseburger cooked on a wood-fired grill and served with french fries ($22.95). The grilled garden eggplant ($17.95) is a delicious vegetarian option. Mustards Bar & Grill also features a short list of California's best wines.

An added bonus is that you can use your Priority Pass benefit at this restaurant. Credit cards like the Capital One Venture X Rewards Credit Card and the Chase Sapphire Reserve allow you to enroll for a Priority Pass membership that not only comes with lounge access but also allows you to visit one of over two dozen airport restaurants where your membership will get you a substantial discount on a meal.

Related: Skip the lounge and get free food at 29 US restaurants that are part of Priority Pass

During my college years in Washington, D.C., Ben's Chili Bowl was the place to go for a home-cooked meal at bargain prices in the city's historic U Street neighborhood. The restaurant, which first opened in 1958, is known for its fresh homemade chili, banana pudding and half-smokes (a sausage similar to a hot dog that's native to our nation's capital). Celebrities and politicians, including former President Barack Obama, U2 frontman Bono, singer Bruno Mars, comedian-actor Kevin Hart and tennis legend Serena Williams, have eaten at Ben's when they're in town.

An outlet of Ben's Chili Bowl opened in National Hall at the airport in 2014. Not only can you get Ben's iconic chili on a regular or spicy half-smoke ($7.69) or the single patty chili burger ($7.69), but you can also add it to breakfast items like an egg and half-smoke sandwich or hotcakes with eggs, grits or home fries.

Located in the center core of Denver International Airport (DEN)'s C gates, Root Down operates a branch of a very popular downtown restaurant, serving what it calls "a globally influenced seasonal cuisine with a locally sourced, field-to-fork mentality."

At the airport, I'm a big fan of the farm-to-table Cobb salad ($19.15) and the banh mi turkey burger with sweet potato fries ($17.50). You can wash either down with a solid selection of wines or a great choice of local beers on tap.

I ordered the truffle burger with smashed double patties, dashi onions, truffle provolone cheese, pickle chips and truffle mayonnaise ($13) with a side of skinny fries ($4). It was so delicious that I plan on stopping there every time I'm at LAX.

Umami Burger is open every day from 9 a.m. to midnight.

When I was in college, I became addicted to Cuban coffee, so every time I fly in or out of Miami International Airport (MIA), I make a beeline to Café Versailles in the airport's North Terminal, concourse D (by gate D5 on the second floor) for a Cuban coffee fix. Know, though, that you can also get Cuban food staples here.

Some of my favorite items to order here include carne empanadas ($4), croquettes ($1.95), the mini Cuban pressed sandwich ($3.25) and pastelitos ($2.95), a guava and cheese pastry that goes great with coffee. My two drinks of choice are a shot of strong Cuban espresso coffee ($1) and the cortadito con evaporada ($1.25).

Related: Miami Airport 101: Where to eat and drink at MIA

I'm a big cheese lover, so much so that if there's a cheese board on a restaurant menu, I'll get that before an entree or a dessert. One of my favorite cheese shops is Seattle-based Beecher’s Handmade Cheese, and lucky for me, they have a shop near gate C3 at Seattle-Tacoma International Airport (SEA).

My favorite Beecher's cheeses are the Marco Polo ($12), a pepper cow's milk cheese, and the aptly named Just Jack ($12). I like to take several cheeses home in my freezer bag each time I visit. I really enjoy Beecher's simple but delicious grilled cheese sandwich ($9.49), but the "world's best" macaroni and cheese ($8.49) is also a hit. But be prepared to wait in line during peak hours since its online ordering system is currently down.

You can dine at Beecher's Handmade Cheese every day from 6 a.m. to 8 p.m.

In October 2011, I headed to Chicago's O'Hare International Airport (ORD) to celebrate United Airlines uber frequent flyer Tom Stuker as he surpassed 10 million miles accumulated in the United MileagePlus program. The event was held in a United Club and catered by celebrity chef Rick Bayless' restaurant, Tortas Frontera. The food was so great that I'm not ashamed to admit to routing myself through O'Hare on occasion since then just for some more food from Tortas Frontera. There are outlets in Terminal 1 near gate B11, Terminal 3 near gate K4 and Terminal 5 near gate M12.

If I'm really hungry, my go-to is the chipotle-roasted chicken torta with avocado, poblano rajas, jack cheese, arugula and cilantro crema ($13). If not, I'll get the chips and guacamole ($8), which comes with tomatillo and chipotle salsas. Pro tip: Go here to order online as soon as your plane lands so you can grab your food in the restaurant's pick-up area without waiting in the long lines.

Related: Chicago O’Hare vs. Midway: Which Chicago airport should I fly into?

Miss Shirley's Cafe is an iconic family-owned restaurant that is well known for brunch, lunch and all-day breakfast. You'll find a number of locations throughout Baltimore and Annapolis, Maryland, plus one at Baltimore/Washington International Thurgood Marshall Airport (BWI) in concourse A by gate A13.

When I used to travel regularly to Indianapolis for a past job, my first stop was always a nice dinner at the city's iconic St. Elmo Steak House. There, I'd tuck into its famous shrimp cocktail with a signature spicy cocktail sauce and a ribeye steak. If you can't get to St. Elmo's during your visit, don't fret: You can instead check out Harry & Izzy's, which is located in concourse A at Indianapolis International Airport (IND).

Airports across the U.S. have been giving passengers upgraded food options, and a big part of that includes bringing popular local eateries to their terminals. This strategy is designed to offer travelers the chance to eat locally without leaving the airport, which goes a long way in helping airports increase their profits.

Now that most airlines have cut economy meals, why not either sit down for a great meal before your flight or pick up some tasty food to eat at 30,000 feet?