These Are Delta&#8217;s Best Planes for Transatlantic Premium Select and Comfort+

Articles
Darren Murph holds a Guinness World Record as the planet's most prolific professional blogger. He's an explorer at heart, having traversed nearly 50 countries and all 50 US states. He's flown over one million miles on Delta alone, and serves as a senior writer at TPG.
Follow
Oct. 22, 2018
•
13 min read 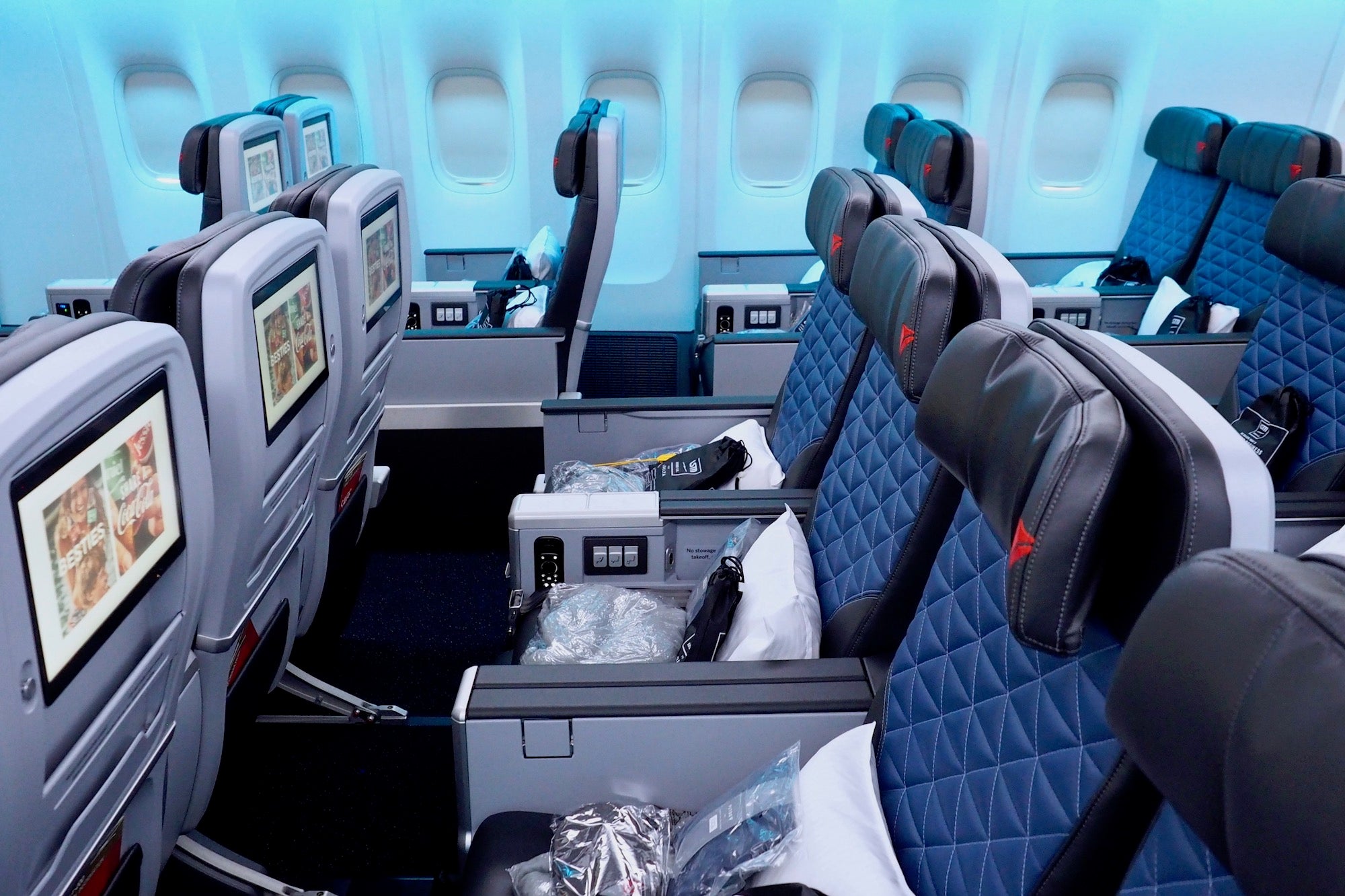 When flying Delta internationally, you can dive into other options beyond simply selecting a route and time. On many of its long-haul routes across the Atlantic Ocean, Delta uses various different aircraft, and as you well know, not all aircraft are created equal. Because of this, it's worth taking a close look at which aircraft will operate a flight before you confirm a booking.

Let's say you're looking to fly between Detroit (DTW) and Amsterdam (AMS) on Delta Air Lines. Currently, you'll find three daily flights, two operated by an Airbus A330-300, and the other by an Airbus A350-900. Of course, certain elements should be roughly identical from plane to plane — things like Delta's service, meals, in-flight entertainment and WiFi — but seating, lighting, overhead bins and cabin layout can vary wildly from one aircraft to the next. Particularly in the mid-range section, the seating positioned between standard economy and business class, the difference can be stark. Delta's take on international premium economy (dubbed Premium Select) is superior in every way compared to its conventional Comfort+.

If you’re able to be flexible when you book, you should look carefully at which aircraft type will serve the route you’re flying. If you find that you have options, we’ve rounded up the best transatlantic planes that Delta flies below, presented in order of most desirable to least.

While two aircraft types currently feature Delta's only true premium economy product, Delta Premium Select, the Airbus A350 is the newer option. The Premium Select cabin sports 48 seats arranged in a 2-4-2 configuration. Each seat offers 18.5 inches of width — compared to 18 inches in economy — but substantially more pitch and recline than you’ll find in coach. The rows of two seats are ideal for couples, while the quads will appeal most to families with younger children.

Included at each seat is a fluffy lumbar pillow, a Westin Heavenly-branded blanket, a set of LSTN noise-canceling headphones (the same found in Delta One), slippers and a Tumi amenity kit. There's also a 13.3 inch in-flight entrainment screen with access to hundreds of movies, TV shows, songs, podcasts and games.

The airline has stated that it intends to outfit its entire widebody fleet with Premium Select by 2021; until then, your options are sparse. Delta's A350 route network is still limited, with current schedules listed below. Its only trans-Atlantic route is to Amsterdam, but that will change as the airline takes delivery of more A350s.

A350 routes and flight dates:

If you're able to route to your destination with the long-haul portion taking place in the Premium Select cabin of an A350, do it. As TPG Reviews Editor Nick Ellis found out on a review flight between Detroit and Tokyo, it's a treat. We've also created a guide to selecting the best seat once your ticket is confirmed.

One final note: Delta's A350 has three distinct classes of service. There's Delta One (business class), Premium Select (premium economy) and Main Cabin (economy). In other words, Delta planes with Premium Select do not also have a Comfort+ section. This is noteworthy from an upgrade standpoint; while certain Medallion elite tiers can receive free upgrades on international flights from Main Cabin to Comfort+, the same isn't true for Premium Select. Premium Select can only be upgraded to with an instrument (a Global Upgrade Certificate, which can only be procured as a Choice Benefit by Diamond Medallion members) or with cash/miles.

As of August 2018, Delta has but a single retrofitted Boeing 777 in service, which features the Delta One Suites and Premium Select cabin that are onboard every one of the carrier's A350 aircraft. If you find yourself on one of the routes below, you could be in luck. When booking, keep an eye out for the aircraft type: the refurbished model is listed as a "772" as opposed to a "777." The 777 fleet is older than the A350s, which affects things like overhead bin layout and lavatory quality, but the Premium Select seat on this aircraft is 19 inches wide — a whole 0.5 inches wider than the Premium Select seats on the aforesaid A350. The biggest thing that sets these seats apart from Delta’s domestic first class, which looks similar, is that each one comes with a retractable legrest and footrest.

Like the A350, the retrofitted 777s do not have any Comfort+ seating; instead, extra legroom seats in standard coach are labeled “preferred” and can be purchased or accessed free of charge by elites. Delta will never sell Premium Select tickets for flights without the true premium-economy product, but be wary when booking through online travel agencies, as they sometimes list Comfort+ as premium economy.

Included at each seat is a fluffy lumbar pillow, a Westin Heavenly-branded blanket, a set of LSTN noise-canceling headphones (the same ones found in Delta One), slippers and a Tumi amenity kit. There's also a 13.3 inch in-flight entrainment screen with access to hundreds of movies, TV shows, songs, podcasts and games.

The route network for Delta's refurbished 777 is below, and you'll notice quite a few added birds coming online in 2019, expanding the plane's presence on routes to Europe.

From here on out, we're picking the best of a subpar selection. Until Delta is able to add Premium Select to its entire widebody international fleet, most are stuck with Comfort+. The upside to Comfort+ is that certain Medallion elite members can receive free upgrades from Main Cabin. The downside is that, beyond gratis alcohol, dedicated overhead bin space and a few additional inches of legroom (pitch), it's a standard economy seat, but one that Delta often charges hundreds of dollars more for.

Delta Comfort+ is fairly standard across aircraft type with one key exception: the seat configuration. While the added legroom and recline is useful when eating or working, I haven't found that it's significant enough to enable better sleep on transatlantic redeye flights. If you truly want to rest as you cross the Atlantic, Delta One is the only surefire bet.

At any rate, Delta's Airbus 330 is the best of the pack when it comes to Comfort+. Why? Well, it has 40 Comfort+ seats, which is more than other widebody aircraft in Delta's fleet. (That's for the A330-300; the shorter A330-200 version has 32.) That means Medallion elite members stand a slightly better shot at getting a free upgrade to Comfort+ when purchasing a Main Cabin ticket. Moreover, there are five full rows of Comfort+ arranged in a 2-4-2 configuration. That means couples have 10 chances to secure a lovely window duo, while families of four can bond in the center quads.

Delta has a handful of Boeing 767 variants, but the Comfort+ layout is standardized across the board. You'll find 28 Comfort+ seats arranged in a 2-3-2 configuration.

Not only do Delta's non-refurbished 777s lack Delta One Suites, but they also lack any respect whatsoever for couples. Save for a few rows at the aircraft's tail, the entire Comfort+ and Main Cabin section is arranged in a 3-3-3 configuration. (That's still better than the now-ubiquitous 3-4-3, though.)

The 777 has just 36 Comfort+ seats – four rows of 3-3-3. Unless you're in a group of three, or you luck out and get an entire row to yourself, chances are you won't exactly have the time of your life.

Wading through Delta's 757 variants is a monumental chore. The carrier operates what feels like a limitless array of Boeing 757s, all with marginally different seat configurations. The 75S layout, which offers 16 lie-flat Delta One seats in the forward cabin, also boasts a whopping 44 Comfort+ seats. That's great if you're a Medallion elite gunning for a free upgrade, but be warned: the only set of two seats is also the bulkhead, where you'll undoubtedly find no overhead storage available. From there on back, you're looking at a 3-3 seating configuration.

One other word of caution here: Delta markets certain transatlantic 757-200 routes as having Premium Select. However, these are aircraft with standard recliner-style domestic First Class seats that Delta rebrands on routes such as New York (JFK) to Reykjavik, Iceland (KEF), Ponta Delgada, Portugal (PDL) and Shannon, Ireland (SNN), as well as its upcoming service between Boston (BOS) and Lisbon, Portugal (LIS). Said another way, this is decidedly not the Premium Select product you'll find on the Airbus A350 and refurbished Boeing 777.

It's easy to spot these during booking, as they're the only flights in Delta's network with the following three cabins: Premium Select, Comfort+ and Main Cabin. Before booking, be sure to read our review of Comfort+ onboard a Delta 757.

If you’re looking to book an award ticket on any of these routes, you’ve got options. While SkyMiles aren’t highly valued per TPG’s own valuations, you can boost your SkyMiles balance by adding a co-branded Delta Amex to your wallet.

What we’d recommend instead, however, is booking through a partner in order to score seats for less. Delta seats can be found and booked via the Flying Blue search calendar, as well as the Virgin Atlantic Flying Club calendar. Both of these portals, while they have their quirks, generally price Delta award tickets out cheaper than Delta’s own booking engine.

Remember, you don’t need to have ever flown Virgin Atlantic to book Delta award tickets through its Flying Club program, and the same is true for Flying Blue. Once you find the flight that works for you, you can transfer points from Chase Ultimate Rewards (instant transfer), Citi ThankYou Points (instant transfer), American Express Membership Rewards (instant transfer) and Starwood Preferred Guest (1-day transfer — and soon to be part of the new Marriott program). Here’s a sampling of credit cards you can use to earn points in these programs:

If you’re on the fence about which card will serve you best as a Delta flyer, we’ve assembled a guide to help out.