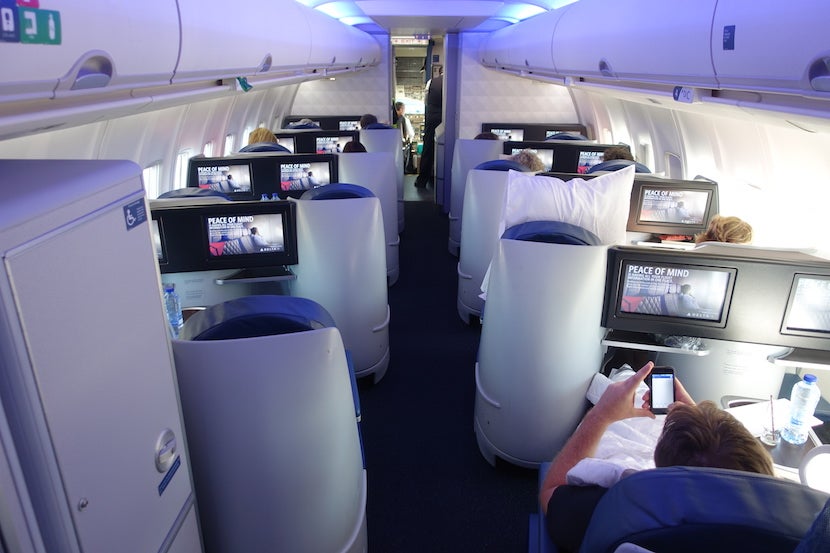 You'll Soon Be Able to Score Free Upgrades on Some Delta One Flights
This post contains references to products from one or more of our advertisers. We may receive compensation when you click on links to those products. Terms apply to the offers listed on this page. For an explanation of our Advertising Policy, visit this page.

On Saturday, we learned that Delta's bringing its premium lie-flat business-class product to a handful of additional routes — but the airline isn't stopping there. Come April 1, 2018, Medallion elite members will be able to take advantage of a very welcome new perk: complimentary upgrades to Delta One on domestic flights. That's right — a positive change from the SkyMiles program.

What's especially notable here is that this change doesn't only affect Delta's new upgraded routes — all domestic Delta One flights will be eligible, so beginning April 1, we shouldn't see any lie-flat seats going out empty on the airline's premium US flights.

I was expecting a slew of terms and conditions, and while some details are yet to be worked out, Delta's Vice President of Customer Engagement and Loyalty, Sandeep Dube, told me that the airline's goal is to make this upgrade process simple and intuitive.

In a nutshell, Delta One upgrades will work the same way first-class upgrades work today, with one exception: they'll be processed only on the day of departure. It's not yet clear if that means 24 hours before the flight or only on the actual calendar day, but Dube did confirm that the goal is for upgrades to be processed prior to the gate — though, depending on no-shows and seats held for last-minute sales, I imagine gate agents will end up processing some upgrades, too.

Other than that "day of departure" restriction, we can expect the same first-class upgrade procedures to apply here. That means anyone currently eligible for a complimentary upgrade to first class will be able to score a Delta One seat, depending on availability, of course — that includes companions, and individuals with upgrade perks from Delta's partnership with Starwood Preferred Guest.

Personally, I don't have any Delta elite status, so upgrades thanks to my SPG Platinum status are at the bottom of the list. So would I ever expect to score a flat-bed seat on one of this flights? Nope. That said, depending on the day and time of travel, it's entirely possible that members in lower Medallion tiers will get moved up to Delta One — while Diamond members are prioritized first, of course, I imagine it won't be unheard of for Platinum, Gold or perhaps even Silver members to book economy and get a lie-flat seat during off-peak periods on some of the leisure routes.

No matter what, this change means Delta One seats won't go to waste — some of the airline's most valued customers will soon have a chance to experience them for the cost of a seat in coach, though, as always, if you want a guarantee that you'll be seated in business class, that's the cabin you'll want to book.