7 of the best road trips around the UK 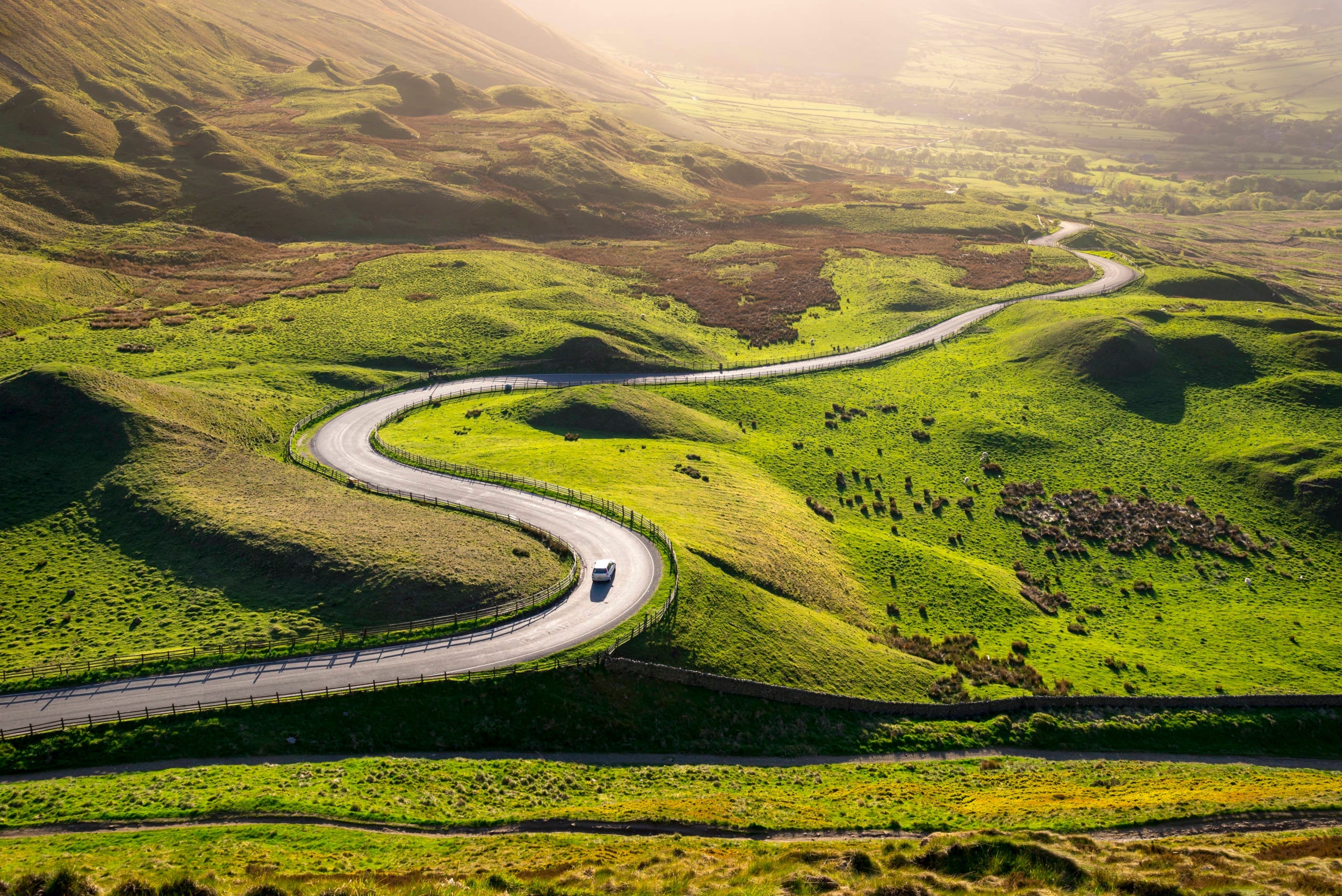 The U.K. has more than 260,000 miles of road ready to explore. As fun alternative to flying, a road trip can bring everyone together. From the unspoilt Welsh coast to the rugged Scottish Highlands, a road trip is a time to crank up your favorite power ballads, explore those roads less travelled and compare highway gas stations.

There are many stunning road trip options around the fair isles. Our favorites are below as they are fun to drive and include amazing scenery and things to do. We have also included ideas on where to stay from the luxurious to the adventurous.

Road trips need cars, right? Make sure to choose the best credit cards for your car rental, which include upgraded status at the likes of Avis and Hertz, the ability to earn airline miles and enhanced insurance.

For something a little different, you can hire a Turo, the world’s largest car-sharing marketplace. It basically allows the car owner to earn money by sharing their car whenever they’re not using it. Turo has a wide selection of cars including classics, convertibles, SUVs and more.

Peak District to the Lake District

Driving through Windermere, the Yorkshire Dales and Manchester, start the road trip with two beautiful National Parks -- the Lake District and the Peak District. The Lake District is a great place to start this self-guided road trip with 912 square miles of high mountains, coastline and, of course, 50 lakes and tarns.

In the Peak District, Chatsworth House is well worth a stop, as it is one of the U.K.’s favorite stately homes with 30 magnificent rooms, a 105-acre garden, parkland, a farmyard and one of Britain’s best farm shops. A visit to the Peak District isn’t complete without a visit to the birthplace of the Bakewell Pudding before setting off to the bright lights of Manchester.

How long will it take? Four to five days.

Where to stay: The DoubleTree by Hilton Sheffield Park Hotel is located on the doorstep of the beautiful National Peak District, has a large spa and is a good base for South Yorkshire and North Derbyshire. Rooms start at about $80 per night.

Oxford and the Cotswolds

Driving through Ross-on-Wye, the Cotswolds, Cheltenham, Gloucester and Oxford, this road trip is for those of you looking for a quintessentially British weekend starting with historic Oxford then chocolate-box Cotswold villages before heading over the border to Wales.

Related: 6 tips for surviving a road trip with a large family

This route will wind you through many Areas of Outstanding Natural beauty. The Cotswolds covers a huge area of almost 800 square miles and runs through five counties (Gloucestershire, Oxfordshire, Warwickshire, Wiltshire and Worcestershire). Stretch your legs with 3,000 miles of footpaths and bridleways to explore, wildflower meadows and 4,000 miles of historic Cotswold stone walls dividing up the landscape.

How long will it take? Three to four days.

Where to stay: Malmesbury is strategically well located on this road trip and Whatley Manor is great for some pampering. This luxury manor house hotel is set in the beautiful Cotswolds countryside with 12 acres of gardens, a spa with an indoor/outdoor pool and not one but two Michelin Stars. Prices start at about $340 per night.

Starting at St Davids in the south, winding through to Aberdaron on the tip of the wild Llŷn Peninsula in the north, this Welsh road trip shows off sandy beaches, harbor villages and hidden coves.

Driving through St Davids, Mwnt Beach, Cardigan and Portmeirion will take you through two National Parks. From the comfort of your car to a train, there are seven heritage railways within Snowdonia -- with arguably the best being the scenic Snowdon Mountain Railway and the dainty Talyllyn Railway.

Mwnt Beach is well worth a stop. This sandy beach in the summer is home to dolphins, seals and porpoises. You’ll drive down country lanes to be presented with dramatic views over Cardigan Bay. Look out for the tiny white picturesque Church of the Holy Cross above the beach.

How long will it take? Six to seven days

Where to stay: The Quay Hotel & Spa in Deganwy epitomizes cool sophistication on the North Wales coast. Set on the idyllic Conwy Estuary, expect awe-inspiring views of the most magical scenery in North Wales. Rooms start from $240 per night.

From the coast to the mountains, this mini road trip has spectacular Brecon Beacons scenery, Tywi Valley views and is the road trip is for driving fans full of hairpin bends and switchbacks.

Start in the north at Llandovery, crossing the dragon’s humps of Pont Aber and Herbert’s Pass then cascade down to the village of Gwaun-Cae-Gurwen. Along the way, you’ll be met by wayward sheep, proper Welsh farmers, rustic farmhouses or even a motoring journalist as thanks to Jeremy Clarkson, it’s also known as the Top Gear road.

How long will it take? One day, though it’s far better to extend your trip and stay in the Brecon Beacons area for the weekend.

Where to stay: The Charcoal Hut is somewhere to stay if you want to walk straight into the Brecon Beacons from your door, then come home to the romance of a cozy hut with a hot tub. Bliss. Cabins from $140 per night.

This fairly new road trip launched in 2019 and covers 200 miles around the heart of Scotland. The round trip from Stirling takes you through Loch Lomond and The Trossachs National Park up to Cairngorms National Park and down through Perthshire. Easily done in a weekend, you can also whizz down the road from Glasgow and Edinburgh.

Heart 200 is the road trip that has something for everyone from castles, distilleries (gin and whisky), stunning nature and delicious pubs and eateries. On the way down from the Heart 200, check out Scotland’s National Museum of Flight where you can get up close and personal to Scotland’s only Concorde.

How long will it take? Two to three days

Where to stay: Macdonald Aviemore Resort is situated at the very heart of the Cairngorms National Park with a choice of three four-star hotels and 18 woodland lodges. Its loyalty scheme called Fans of Macdonald Hotels, offering discounts when booking for short breaks, dining experiences and spa treatments and competitions. Rooms start at about $170 a night.

Scotland’s answer to Route 66 and possibly named after the famous Proclaimers song, the North Coast 500 will take you to the furthest reaches of the Highlands. Start in Inverness and look for Nessie at nearby Loch Ness before spending the week discovering fairy-tale castles, beaches and Scottish villages. Just watch out for wayward Highland cows and stags.

Meander through the east coast villages of Dornoch and Wick to Aultbea and Ullapool on the west coast. Ullapool overlooks the shores of Loch Broom and is home to the award-winning Highland Liquor Company which produces Seven Crofts gin, named after the original seven private dwellings that made up Ullapool in 1791. Stop off for a tour of the distillery and of course tastings for the lucky adults not driving -- or better still spend the night here.

How long will it take? Five to six days.

Where to stay: The road trip takes you along rural areas so booking in advance is advisable. Ullapool is also home to The Ceilidh Place -- a quirky low-key TV-free literature themed hotel with a restaurant offering local seafood. Try the Loch Broom langoustines with lemon mayo and salsa verde. Rooms from $215 per night.

Starting in either Derry or Belfast, head to the coast where you’ll pass the Giant’s Causeway, the Dark Hedges (as seen in Game of Thrones) and Carrick-a-Rede Rope Bridge -- from where you can sometimes see Scotland on a clear day. Then head for the Gobbins Cliff Path, north of Belfast, an ambitious walkway chiseled out of basalt rock with hammers.

The white sands and azure waters of Whitepark Bay also make for a lovely stop. Rathlin, Northern Ireland’s only inhabited offshore island, sits around halfway along the route and is home to an RSPB reserve. Its resident guillemots, razorbills and puffins satisfy aviation needs of a different kind and are a must-see if birdwatching is your thing.

How long will it take? Three to four days. There are ferry companies like Stena Line with regular sailings that will transport you and your car to Northern Ireland.

Whether it's your summer vacation or a week away from the office, none of these routes will disappoint as they offer so much variety whether you are looking for a short weekend trip or a full-on week of discovery.