Articles
Janice Wald Henderson is a six-time national award-winning cruise journalist who has visited nearly 100 countries via ocean liners, expedition ships, riverboats and barges. She is based in Los Angeles but happiest at sea.
Follow
Oct. 16, 2022
•
10 min read 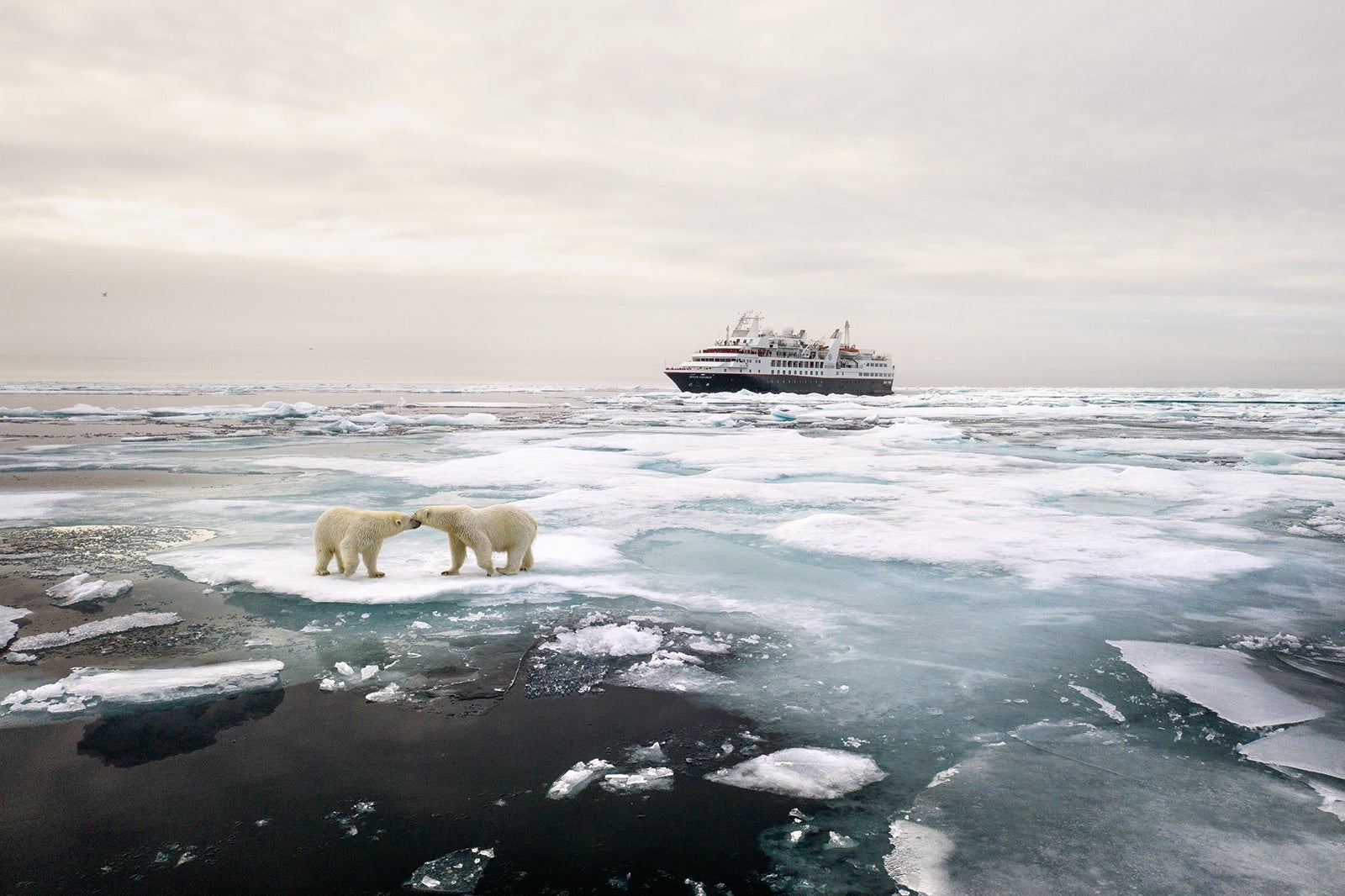 Ultra-luxury line Silversea Cruises offers a jaw-dropping array of worldwide destinations, on both classic — as the line calls its traditional cruise ships — and expedition vessels. Until recently, Silversea was the only luxury line offering both voyage styles; perhaps its success led the way for others, such as Viking and Seabourn, to follow.

Between its classic and expedition vessels, Silversea features 10 ships visiting more than 900 destinations across all seven continents. Among classic cruise destinations, Silversea maintains a strong presence in Europe, especially in the Mediterranean (company headquarters are in Monaco). It also sails the British Isles and Northern Europe from spring into late fall, and its Canada and New England “leaf-peeping” cruises generate much buzz in the autumn months.

Silversea caters to travelers looking for extra-long sailings to multiple destinations. The line offers a limited number of “combination cruises,” where itineraries may combine two or three cruises into one for in-depth regional exploration. Grand Voyages, its next longest sails, can run from 59 to 131 days. The ultimate in destination-bagging, world cruises are the longest itineraries on offer and run once per year; for example, the 140-day voyage in 2023 visits Oceania, Asia, Africa, the Amazon and Caribbean, while the 133-day cruise in 2024 circles the Pacific with visits to Hawaii, Oceania, Asia and Alaska.

Silversea’s five expedition ships seek out more remote locales. Three of the ships explore the Arctic and Antarctica during polar seasons. The 100-passenger Silver Origin, custom-built to sail the Galapagos, cruises in these wildlife-rich islands year-round. The 144-passenger Silver Explorer spends much time in Australia’s Kimberley region and also in the South Pacific islands.

When not sailing polar regions, Silversea’s expedition vessels venture literally to every country permitted, from the American West Coast and the Indian Ocean to the South Pacific and South America. The line’s first expedition Grand Voyage in 2023 is a 131-day cruise on Silver Endeavour, sailing from southern Chile and Antarctica to Greenland and the Arctic, continent-hopping in between to visit southeast Africa, the Middle East, Mediterranean, British Isles and Iceland.

With Silversea offering most of the world on a silver platter, the challenge becomes choosing a sole destination. Here, we offer five regions where Silversea consistently shines, promising a cruise meeting — if not exceeding — anyone’s idea of a dream vacation.

Silversea is a longtime player in the Galapagos; the now-retired Silver Galapagos began cruising here in 2013. The more polished, 100-passenger Silver Origin, Silversea’s first destination-specific ship, debuted in 2021 and sails between the islands year-round. All-suite accommodations with ocean-view showers, butlers for all guests, an interactive basecamp, Ecuadorian cooking classes and a stargazing platform set this expedition ship apart from the exploratory pack.

Most cruises are seven days long, sailing round trip from San Cristobal, Ecuador, and visiting Floreana and Santa Cruz among the isles. During the December holidays, 10 and 11-day sails make onboard celebrating relaxed and easy.

With three Silversea expedition ships cruising the Arctic, count on plenty of choice in this rugged, bucket-list destination. Silver Cloud and Silver Wind, 254-passenger twin expedition ships, sail with just 200 passengers in polar regions. They deliver a multitude of itineraries and voyage lengths from June until August.

Options include nine-day and 12-day full circumnavigations of Svalbard, and a 24-day Northwest Passage crossing on Silver Wind. Some nine-day cruises are Greenland exclusive; some longer sails, such as a 16-day round trip from Kangerlussuaq, Greenland, on Silver Cloud, explore Canadian islands, such as Lower Savage, with opportunities to spot polar bears. This voyage also allows passengers to learn about Inuit culture, visiting the Nunatta Sunakkutaangit Museum with its impressive collection of local and regional Inuit artifacts and artwork.

The 200-passenger Silver Endeavour joins the fleet in fall 2022 and will also sail the Arctic in 2023; we await further itinerary details. That ship was a Crystal Cruises new-build before the line’s pandemic demise; that cruise line and its two classic cruise ships are now owned by Abercrombie & Kent, but Silversea bought the expedition vessel.

Related: I didn't think I'd like my first Arctic expedition cruise; here's what proved me wrong

Silver Endeavour possesses a PC6 ice-class rating, one of the industry’s highest, and advanced exploration technology, including a remotely operated underwater vehicle and a remote gimbal camera system. Silver Endeavour will offer Silversea’s first 20-day “Deep South” itinerary, which includes an attempt to cross the 69th parallel south, in February 2023.

Antarctic cruises sailing the Drake Passage cruise round trip from Puerto Williams, Chile, and run from 10 to 18 days. These longer, more comprehensive cruises can include three days in the Falkland Islands and South Georgia or Elephant Island.

Related: 6 ways to travel to Antarctica in style and luxury

Silversea claims the Med as its heritage and home base and plies its waters accordingly. The line delivers access to both tiny ports and big-hitters so passengers can experience a most authentic Mediterranean cruise, either in classic or expedition style. The fleet’s classic ships are magnets for luxe-loving cruisers; the 2023 arrival of 728-passenger Silver Nova and twin Silver Ray in 2024 means Silversea will soon have eight classic ships plying the region.

Count on diverse itineraries and cruise lengths, with many voyages cruising 10 or 11 days. Look for more off-the-beaten-track ports, not just glam marquee cities. Ships may stop in Giardini Naxos, Sicily; Bari, Italy; Casablanca, Morocco (with cool excursions like lunch at Rick’s Cafe, from the iconic film); or Collioure on the south coast of France, where you can get a chance to visit medieval Carcassonne.

When Silversea ships visit glam, big-name ports, they go beyond offering just the typical shore excursions featured on many other vessels — perhaps, in part, because many guests have already been to top European cities and are looking for something more. In Monaco's Monte Carlo, this luxe line offers outings such as flightseeing over the Côte d’Azur or exploring Dolceacqua, Italy, a beautifully preserved medieval town in Liguria at France’s border. When a ship visits Livorno, Italy, passengers can go truffle-hunting, sip super-Tuscan wines or embark on a S.A.L.T. (Sea and Land Taste) shore excursion, savoring an Italian barbecue feast with fine wine in the Tuscan hills.

Even Silversea’s expedition ships indulge in Med time, although with a smaller footprint. These cruises will unfold differently than on classic ships, with an emphasis on remote towns and villages. Expect an expedition team of experts in fields like history leading many outings. Passengers may go on active outings like hikes and Zodiac rides. For example, on a Silver Cloud sail from Athens to Lisbon, Portugal, passengers visit Tunisia and Algeria, venturing to seaside ports with 16th-century mosques, old casbahs and Spanish fortresses.

Cruises hovering around two weeks are plentiful, such as those between Auckland, New Zealand and Sydney or Melbourne in Australia. Many hone in on New Zealand’s pristine splendors, visiting beckoning ports like Dunedin and Wellington. Ships also stop in Hobart, Tasmania, where a whopping 14 excursions can await.

Classic itineraries covering more of Australia include a 16-day trip from Brisbane to Singapore, including ports like Cairns to view the Great Barrier Reef or join an aboriginal rainforest journey. In Darwin, Australia’s capital of the north, head out on the Adelaide River to look for jumping crocodiles.

Silversea presents an eye-popping array of both far-flung and close-to-home itineraries, for traditional cruising or adventuring in utmost luxury. Expect a significant focus on Arctic and Antarctic itineraries for expedition ships, with Galapagos cruises year-round. Classic ships include close-to-home fall foliage, Alaska and Caribbean voyages, yet also venture globally, with an emphasis on Europe from spring to fall, and Asia, South America and Australia and New Zealand in our winter.

Featured image by SILVERSEA
Editorial disclaimer: Opinions expressed here are the author’s alone, not those of any bank, credit card issuer, airline or hotel chain, and have not been reviewed, approved or otherwise endorsed by any of these entities.