6 ways to travel to Antarctica in style and luxury 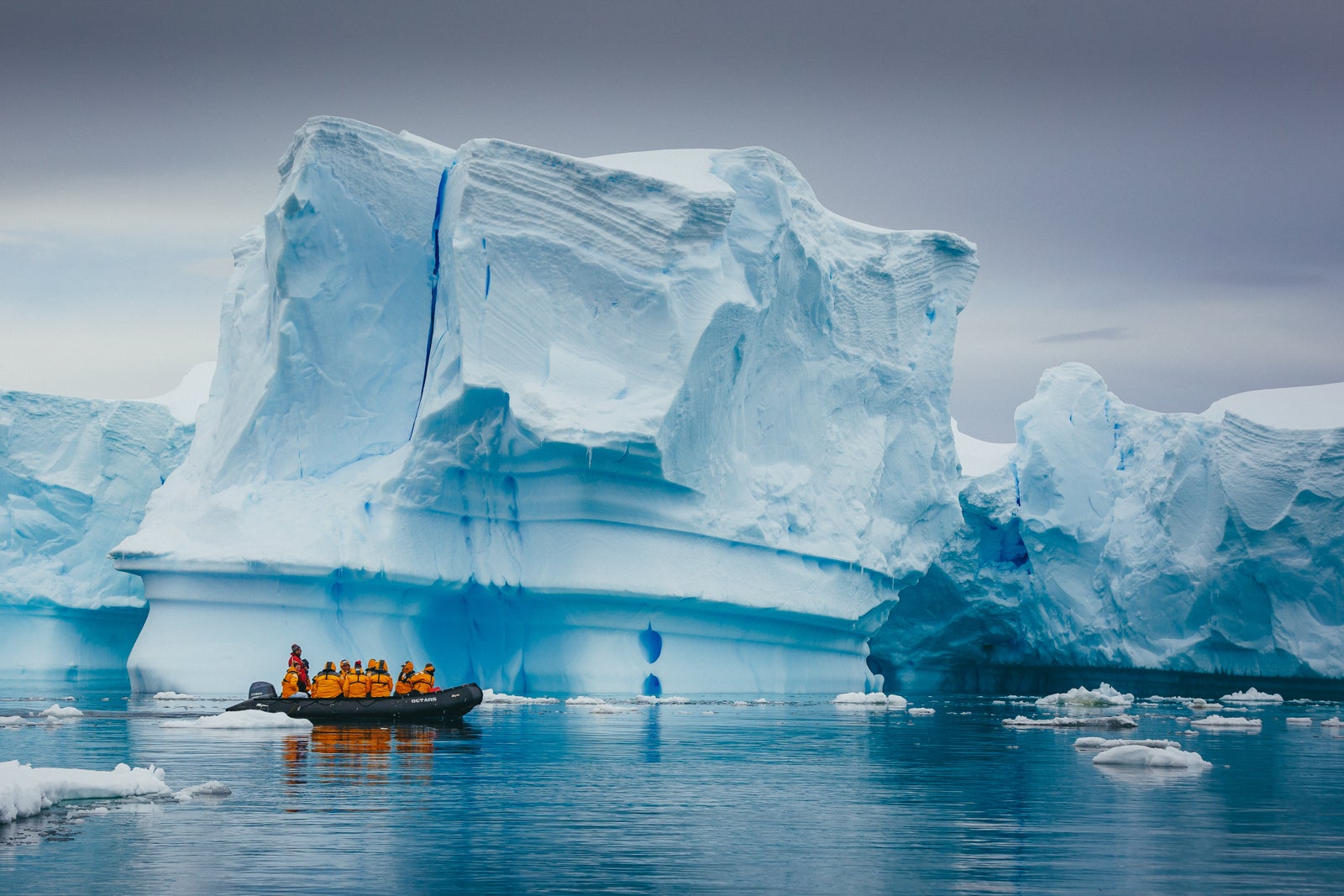 There was a time when traveling to Antarctica meant roughing it a bit. Many of the adventure travel companies that pioneered tourist trips to the White Continent initially used relatively spartan, sometimes repurposed ships to get people there.

But those days are long gone.

Now you can travel to the world's most remote destination in luxury and style — assuming you're willing to pay the often steep prices for the privilege.

Luxury travel companies such as Silversea Cruises and Abercrombie & Kent in recent years have carved out a niche offering high-end voyages to Antarctica on upscale vessels, where you'll sleep in cabins and dine in onboard eateries that are every bit as spectacular as the Antarctic scenery out the window of your ship. And a rapidly growing list of other high-end travel companies are in the process of joining them.

Also new to upscale cruising to Antarctica are start-up "luxe adventure" line Atlas Ocean Voyages, which began Antarctica sailings in late 2021 with a purpose-built expedition vessel, and Viking, which launched voyages to the continent with a new expedition ship in early 2022.

Luxury line Seabourn is also about to get into Antarctica cruising in a big way in late 2022 with it first luxury expedition ship.

Here, we take a look at six companies that are leading the way in luxury trips to Antarctica.

Silversea Cruises has been the leader among the major luxury cruise lines in expanding into expedition cruises to remote, hard-to-reach destinations, and it's a big player in luxury expeditions to Antarctica.

All of the ships offer traditional expeditions to Antarctica that begin and end in South America and include crossings of the sometimes rough Drake Passage. But just this winter, Silversea also began offering "fly-cruise" trips to Antarctica on the Silver Explorer that include a direct flight to the continent. The relatively rare trips let passengers skip the waves of the Drake.

Related: This new luxury tour gets you to Antarctica faster than most

While older than many of the luxury ships sailing to Antarctica, Silver Explorer, Silver Cloud and Silver Wind offer a luxury experience with all-suite accommodations, upscale cuisine and such luxury touches as butler service for every passenger.

The details: Fares for 10-night Antarctica trips start at $9,950 per person, based on double occupancy.

A specialist in high-end tours around the world, Abercrombie & Kent has been a major player in luxury Antarctica voyages for more than two decades.

While the company doesn't own its own luxury vessel to take well-heeled travelers to the continent, it charters one of the finest upscale expedition ships around for such voyages: Ponant's Le Lyrial.

Unveiled in 2015, the 264-passenger vessel is sleek and stylish, with contemporary decor, large rooms with balconies and multiple restaurants. But it's also tough, which you want in Antarctica. It has a strengthened hull and other features that allow it to bump through Antarctic ice with relative ease (it has a 1C ice class ratings from Lloyd's Register).

While Ponant, a French line, normally draws a large number of French speakers (its trips are bilingual with announcements in both French and English), that changes when Abercrombie & Kent charters Le Lyrial. The Illinois-based tour company brings on its own English-speaking expedition guides and lecturers to lead the sailings and offers English-only programming that draws mostly English speaking passengers.

When sailing for Abercrombie & Kent in Antarctica, Le Lyrial also operates with a maximum of 199 passengers on board — 65 fewer than it can normally hold.

The details: Fares for 12-night Antarctica trips start at $12,995 per person, based on double occupancy. Fares include a pre-cruise, two-night hotel stay in Buenos Aires, but not round-trip flights between Buenos Aires and Ushuaia, which are an extra $895.

Billed as a “discovery yacht,” the super-swanky ship offers all-suite accommodations (and we’re talking real suites with separate living rooms), butler service for all and a wide range of onboard dining options including a sushi restaurant. It has a whiskey bar stocked with more than 110 whiskies and other high-end liquors, plus a spa and a yoga studio.

Scenic Eclipse also was the first Antarctica-bound cruise vessel to boast helicopters to take passengers on epic (and pricey) Antarctica excursions. It has a submarine for underwater exploring, too. Having experienced a helicopter excursion from the vessel, I can say that it's truly a once-in-a-lifetime experience.

On the downside, the helicopter pad and hangars on Scenic Eclipse eat up a lot of space on the vessel's top deck, as do the suites along the vessel's sharply sloping front. The combination leaves less available room for observation areas. The result is a ship with less outdoor space for viewing scenery than is typical for small vessels operating polar trips.

The details: Fares for 12-night Antarctica trips start at $15,655 per person, based on double occupancy. Fares include a pre-cruise, one-night hotel stay in Buenos Aires; round-trip flights from Buenos Aires to Ushuaia; drinks, including spirits and fine wines; and prepaid gratuities.

Related: These 8 books are must reads before an Antarctica trip

Just launched in August 2021, Atlas Ocean Voyages is an all-new, small-ship cruise line that plans to focus on "luxe adventure" trips to places like Antarctica and the Arctic while also offering some sailings in Europe and other warm-weather locales.

For now, Atlas is operating just one vessel, a 184-passenger expedition ship called World Navigator, but the Miami-based brand has already ordered four more nearly identical vessels for delivery by 2024. Many of those will sail regularly to Antarctica, too.

Built tough for polar exploring (it has a PC 6 ice class rating), World Navigator is also designed to be upscale with elegant, 1940s-influenced decor, such pampering touches as a L'Occitane spa (the first at sea) and butler service in the top cabins.

The vessel, on which I recently sailed, giving it high marks, is also loaded with indoor and outdoor observation areas including an innovative, close-to-the-waterline outside deck area with heated seating called The Water's Edge. High-tech touches include a GPS that lets it hover in sensitive areas without dropping anchor.

Related: I just spent the night in an 'igloo' in Antarctica — here's how you can, too

The details: Nine-night voyages to Antarctica start at $10,499 per person, based on double occupancy. Fares cover drinks, including spirits and fine wines; shipboard Wi-Fi; prepaid gratuities; and emergency medical evacuation insurance for every passenger (the latter being a rare offering among companies cruising to Antarctica).

Viking is a newcomer to expedition cruising to Antarctica — as of the date of this story's posting, it's only been offering Antarctica trips for a few weeks. But it's already getting attention from cruise-industry watchers.

That's because the new expedition ship the line has built for Antarctica sailings — the 378-passenger Viking Octantis — has several new and unusual features. Most notable is The Hangar, an enclosed marina that allows passengers to transfer to the ship’s Zodiac landing craft while still in the protected interior of the ship. A first for an expedition ship, it's something that could significantly improve the experience for passengers heading out on Antarctica landings.

In another first for polar expedition cruise vessels, every cabin on Viking Octantis has floor-to-ceiling glass walls that slide partially open from the top to create a balcony-like feel.

The public areas and cabins on Viking Octantis boast an elegant Scandinavian design. Its restaurants include a version of Viking’s signature Italian spot, Manfredi’s, and the Scandinavian-inspired Mamsen’s outlet. Also familiar is a top-of-the-ship, glass-walled Explorers’ Lounge promising stunning views of passing scenery.

As is typical for expedition ships, Viking Octantis is a tough vessel, with a reinforced bow that lets it bump through ice in polar regions and extra tanks for fuel and food. In addition to landing craft on board to bring people ashore, it carries kayaks and even submarines for exploring (the latter being something that is relatively rare on cruise vessels of any type).

Like Viking, Seabourn is just getting into expedition cruising to Antarctica this year with its first-ever expedition ship, the 264-passenger Seabourn Venture.

Scheduled to begin sailing in Antarctica in November, the ice-rated vessel will offer all the luxury touches that Seabourn fans have come to know, including restaurants serving elegant cuisine crafted in part by leading American chef Thomas Keller.

Every room on Seabourn Venture will be a suite and have its own balcony — something that isn’t often the case with expedition ships.

In addition, the ship will offer a lot of high-end adventure. Outdoor equipment for off-ship exploring will include kayaks and bikes. But perhaps Seabourn Venture’s standout adventure feature will be its two, six-person submarines. As on Viking Octantis, passengers on Seabourn Venture will be able to explore the world under the water in polar regions as well as what’s above the waterline.

Related: I just went kayaking in Antarctica — if I can do it, so can you

The vessel will also have a high-definition Cineplex camera that can pick up wildlife like a polar bear up to 4 miles away, streaming the footage into an onboard "discovery center" while leaving the wildlife undisturbed. And it will sail with 26 expedition guides including scientists, historians and naturalists who will lecture regularly on board and lead guided tours on land.

Planning an Antarctica cruise expedition? Start with these stories: