Articles
Alyssa Cerchiai rounds up the top travel stories each week and covers news on the weekends. If you catch her at the airport, she’d happily guest you into the lounge as a proud authorized user of her dad’s Platinum Card by American Express.
Follow
Oct. 24, 2017
•
8 min read 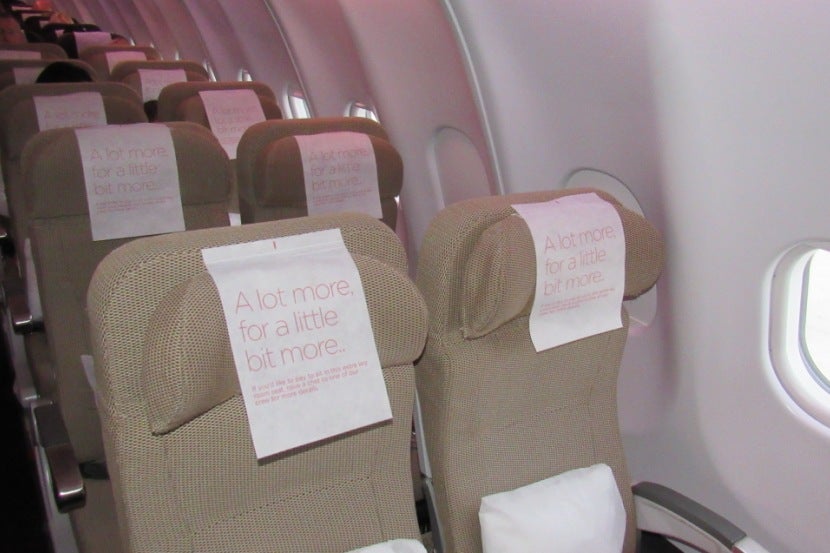 As Paris, I was ecstatic. And since I hadn't heard anything about Virgin Atlantic's extra legroom economy seats, I was curious to see if the additional cost would be worth it.

My father booked this trip directly through the Virgin Atlantic website with his Platinum Card from American Express, which allowed him to earn 5x points for the travel purchase — the round-trip total for our family of four came to $2,769 and yielded 13,845 Membership Rewards points. For extra legroom seats, Virgin's charges from $55 per seat, but we ended up paying around $95 each. Alternatively, my Dad could have paid for our flights with another travel credit card like the Chase Sapphire Reserve or the Chase Sapphire Preferred, which would have earned him 3x or 2x points, respectively, for the travel purchase.

The check-in area for Virgin Atlantic is one of the most dated parts of Miami International Airport (MIA) — I'm not particularly well acquainted with it since we normally fly on American Airlines in Terminal D, home of MIA's Centurion Lounge. Although it wasn't visually pleasing, the check-in process itself was a breeze. There was no line when we arrived, and the agent was nice enough to warn us that the lounge by our gate would be underwhelming — she even suggested that we grab some food before going through security.

Also note that since there was no conveyor belt at the check-in desk, we had to take our luggage over to a bag drop area close by. It wasn't too much of a hassle, but shows how much this part of the airport could be modernized.

From the check-in desk to our gate, the terminal was dimly lit and in need of both an update and a thorough cleaning — we were reluctant to remove our shoes on what seemed to be dirty carpeting at security. We also spotted exposed wood where I assumed baseboards used to be, all the way from security to the lounge.

After getting through security, we made our way to the Club America F Lounge, which my family was able to access thanks to our Priority Pass membership. We each have our own, but as we began pulling up our proof of membership, the agent at the front desk said only my Dad's would suffice. Confused, we tried to clarify that we each had our own memberships and asked twice if we would be charged as guests. Both times, he assured us that we'd be fine, but despite his verbal guarantee, my mother, my sister and I were all counted and charged as guests. Thankfully, Amex was helpful in removing the extra charges because Priority Pass was not.

There are two sides to the Club America F Lounge — one for everyone, the other for first-class passengers only. We decided against paying an upgrade fee to be in the first-class area and entered on the regular side. As the check-in agent had suggested, the space was nothing exciting, but it was packed when we first arrived — we grabbed some of the last available seats but weren't able to sit next to each other. As it came closer to our flight's boarding time, though, more seats began to open up.

The lounge was mostly made up of seating areas with tables and a small kitchenette along one of the walls. Although it looks okay in the photo below, it's really just as dated as the rest of the terminal.

The only food options displayed on this side of the lounge were apples, cookies and an almost-empty bowl of pretzel snack mix.

On the other hand, there were a bunch of beverages. Alcoholic options were only available upon request — for the record, I did not request any because I'm not yet 21 — however, there were no attendants inside the lounge and my parents had to walk over to the first-class side of the lounge to find someone to serve them alcohol.

While the lounge did have TVs, the Wi-Fi was too slow to even run a speed test. Overall, unless you have access through Priority Pass, I definitely would not pay to go to this lounge because it was just as crowded as the boarding area and didn't offer much in terms of amenities.

Boarding began right on time with first- and business-class passengers, followed by those seated in the back of the plane in groups of about 10 rows at a time.

My seat, 54C, was on the left side of the economy cabin. Seats A, C, H and K in rows 51 to 56 all had extra legroom seats, which offer an extra three inches, taking it from 31 inches of pitch to 34. At 5'9", I felt very comfortable for the entire eight-hour flight so I would say it was worth the extra charge.

I enjoyed the 2-4-2 configuration of the plane, mostly because of the rows of two. By booking seats in these rows, we were able to avoid any arguments over who would have to take the middle seat, because there wasn't one.

Each seat came with a small pillow, a blanket and a basic amenity kit. The small pillow was great for my lower back and worked well with the height-adjustable headrest. The seat reclined comfortably with the push of a button on the side of the armrest.

The amenity kit was fairly generic but included a pair of socks, headphones, earplugs, a small container of toothpaste, a toothbrush, a pen and an eye mask. The socks were comfortable and the headphones worked well, but I used my own Bose ones instead.

As for in-flight entertainment, I was pleasantly surprised by the amount of options I had to help distract me during the eight-hour flight. There were about 100 TV shows and movies to choose from, roughly 100 albums to listen to and 20 games to play. My sister and I ended up watching The Secret Life of Pets as well as some fun British reality TV shows to pass time. The IFE also had additional features like destination guides, while another allowed you to send messages to the other passengers.

Tucked into the seat-back pocket were instructions for connecting to the mobile network provided by Virgin. Unlike every other plane I've flown on so far, Virgin Atlantic offered cellular service rather than Wi-Fi. Since my phone didn't automatically connect, I had to select "AeroMobile" in my settings first. Unfortunately, the service was too poor to do just about anything with it.

Food service began with sour cream and chive pretzels and our choice of drinks — I went with ginger ale.

For dinner, the menu had three choices, including Virgin's Christmas dinner, which my family said was delicious. I opted for the pasta bake, which was a little lackluster in terms of flavor — note that this was described as a vegan option so that might have had something to do with why it was so bland.

The salad looked fine but didn't come with any dressing. We also received a small chocolate and a slice of cheesecake for dessert.

Shortly after dinner, flight attendants offered us after-meal beverages and I picked hot chocolate. A few hours before we landed, it was time for breakfast, which consisted of a blueberry yogurt, a fruit cup and a pastry with fruity filling. All three were tasty and fresh.

While my overall experience at MIA could have been better considering the dated lounge and terminal, the flight itself was very comfortable. Flight attendants were kind and helpful, and having the extra three inches of legroom was definitely a plus. The food was decent and my favorite part of the flight was the vast amount of in-flight entertainment options that kept us occupied during the eight-hour trip.

Have you ever flown in Virgin Atlantic's extra legroom seats? Let us know in the comments, below.

Related stories
Flying Blue finally fixes its award search, making it easier to book award tickets
Newark's gorgeous new terminal just got delayed into 2023
The best credit cards for paying your cellphone bill
Why you should consider having both the personal and business Amex Platinum cards