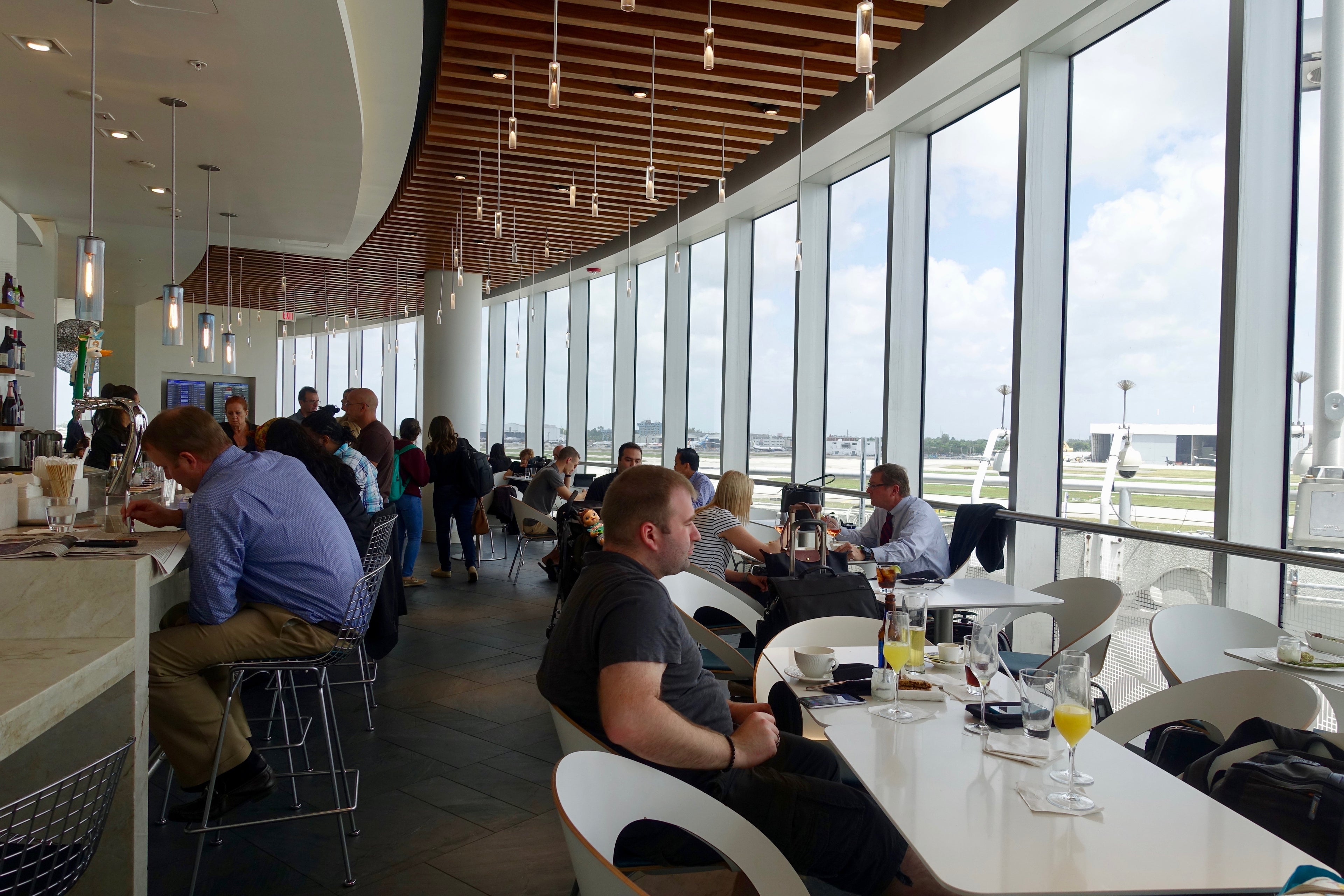 I've finally reached the east coast as part of my visit to every Centurion Lounge in the US, and am now checking out Miami's (MIA) lounge in the Sunshine State. My mission: to find out if Centurion Lounges in the US are living up to the hype or succumbing to the same fate as other domestic lounges. In typical TPG fashion, I spent the first week of August traveling 7,500 miles and reviewing every single Centurion Lounge in the US. You can find Centurion Lounges in San Francisco (SFO), Seattle (SEA), Las Vegas (LAS), Houston (IAH), Dallas (DFW), Miami (MIA) and New York (LGA) — a new one in Philadelphia (PHL) is set to open later this year. Here’s a look at the route I took:

To get as close to an accurate representation of a typical day, I spent a minimum of three hours in each lounge and only visited during lunch and dinner time, evaluating the Wi-Fi, seating, food and beverage options, amenities and service. We’ll be publishing new Centurion Lounge reviews every Tuesday and Thursday, all leading up to the final rankings in mid-September, so stay tuned to see how they checked out. Without further ado, here’s a closer look at the Centurion Lounge at MIA.

You'll find the MIA Centurion Lounge after security in Concourse D near Gate D12. It's also easily accessible from Concourse E since they're connected, but if you're flying in from any other concourse you'll have to go through security a second time. Weary travelers will be happy to know that the lounge is open every day from 5:00am to 11:00pm.

My flight landed in the same concourse, but since the airport is so spread out, it took about eight minutes for me to get to the entrance. Thankfully, there were plenty of large overhead signs to lead me in the right direction.

A pair of elevators with Centurion Lounge branding will be the first thing you see — take one of them up to the 4th floor.

Lest you forget, there's yet another sign once you're in the elevator to remind you to choose the top floor.

Two people were working at the desk when I arrived to check in, and since there was only one person in front of me, I didn't have to wait long. Per the usual, I was asked for my ID, boarding pass and Amex Platinum Card. The attendant was very pleasant and receptive, asking if I wanted to partake in the Spa offerings — I requested a manicure and was immediately given a waiver to fill out prior to my appointment. I always suggest asking to use the shower or any other special other amenities as soon as you check in to make sure you're not wasting time waiting for them than you have to.

There were about 75 people in the 130-seat lounge when I first arrived at 12:50pm. As the day went on, however, the tide began to change and the lounge grew much more crowded. During the dinner rush around 6:00pm, it was so full that several families left as soon as they entered due to the lack of seats.

If you ever walk in and find that the lounge is very busy, take a look down the two corridors located near the main entrance, where you're more likely to score a seat because the area is so secluded — I found that most people in the lounge had no idea that these hallways even existed. Note that sitting in such remote areas does come at a cost — you'll have uncomfortable seats and less natural light since this part of the lounge faces the interior of the concourse.

I spent a few hours sitting in this area and found it was a nice spot to focus and get some work done.

If you decide to sit in the larger lounge space where the TV is, keep in mind that it's located right next to the main hallway and the buffet so there's a lot of foot traffic and activity here.

I spotted a large communal wooden table like I'd seen in all the other Centurion Lounges, though this one offered incredible views of the tarmac.

The dining area seemed small compared to the other Centurion Lounges I'd been to, but the floor-to-ceiling windows somewhat made up for the lack of space.

AvGeeks take note: there were plenty of opportunities to watch planes landing and departing from here since it was so close to the runway.

The menu at this lounge was designed by James Beard Award-winning chef Michelle Bernstein. Although there wasn't a large selection, I found that the offerings were delicious. Of course, there was a salad bar.

The short ribs were perfectly tender, though they were a little dry — yes, I had more than one — while the asparagus was juicy and flavorful, and the salad was a great complement to the rest of the meal.

As far as dessert, I found the vanilla pudding to be a little too watery for my taste, but it was still nice to dig into after a long day of flying. The sugar cookie was delicious, with a crunchy outer rim and a soft, sweet interior.

There were up to two bartenders working the bar during the busy periods, though they were courteous and quick. Even during hectic moments when all the counter seats were taken, it took only about a minute to get a drink. If you have trouble choosing a drink, the bartender suggests the 305 Special, a bitter orange tequila cocktail that's exclusively formulated for the Miami Centurion Lounge.

If you're not interested in alcoholic drinks, there were other options available, like coffee and peach iced tea, which was surprisingly sweet.

The work area near the large wooden table had two computers and a printer for patrons to use. There was also a family room located near the buffet, where little ones could unwind before a flight.

Considering how busy this lounge was, I was pleasantly surprised to find there wasn't a wait for the shower — it was already prepped when I asked to use it, and was by far the nicest, largest and cleanest one I've been to so far.

Here's a look at the whole shower room, with plenty of room to freshen up.

After waiting about an hour, it was finally my turn to use the spa — this time, I decided to get a manicure since I'd already tried out the massage service in Dallas. You’ll need to sign a waiver, which the check-in desk provides and the entire session lasted about 15 minutes. Keep in mind if you end up enjoying your treatment, it's always courteous to tip.

Hot towels and cucumber water were available for anyone waiting to receive a spa treatment.

Here's a peek at what you can expect to see when you're getting your nails done.

My nails felt smooth and my manicurist was very nice and gentle when cutting them, clearing my cuticles and massaging my hands.

The Wi-Fi had download speeds of 14.90 Mbps, which was more than sufficient to get work done.

While the Miami Centurion Lounge does well in nearly every respect, I have to admit it was a pretty unremarkable visit, which could very well be a good thing in the world of airport lounges. It offered, in my opinion, the best seating configuration and opportunity for tarmac views, but in the end, this was overshadowed by the constant overcrowding I experienced. The large windows that let in copious amounts of sunlight still can't mask the fact that the lounge itself is quite small. If you're traveling in a large group, you might want to avoid peak hours — even if you're just stopping by to use the amenities, it can get pretty uncomfortable having to stand in such a small space.

What this lounge really excels with is its amenities — the shower was spacious and squeaky clean, the complimentary spa treatment was a much-needed relaxing experience and the chance to do some plane spotting was greatly appreciated. The food was well presented and the items offered were delicious and filling. There were plenty of beverages available and the bartenders were always ready to pour you a drink. The best part of all? I didn't need to wait too long to utilize any of these services.

The Wi-Fi's performance with download speeds of 14.90 Mbps was reminiscent of the entire lounge experience: Good enough. The true highlight of my visit was the excellent service. From the get go, the desk attendants went above and beyond to meet my needs, asking if I wanted to use the Spa while I checked in, which, apparently, is a rare occurrence. The lounge attendants were on top of things, too, and as soon as I finished a dish, I'd turn around and realize my plate was gone. Though I probably wouldn't go out of my way to visit this lounge during peak hours, I'd still say it's more than worthy of a visit.

Stay tuned every Tuesday and Thursday for reviews of the other domestic Centurion Lounges, all leading up to the final rankings in mid-September.

Have you visited the Miami Centurion Lounge? Tell us about your experience, below.