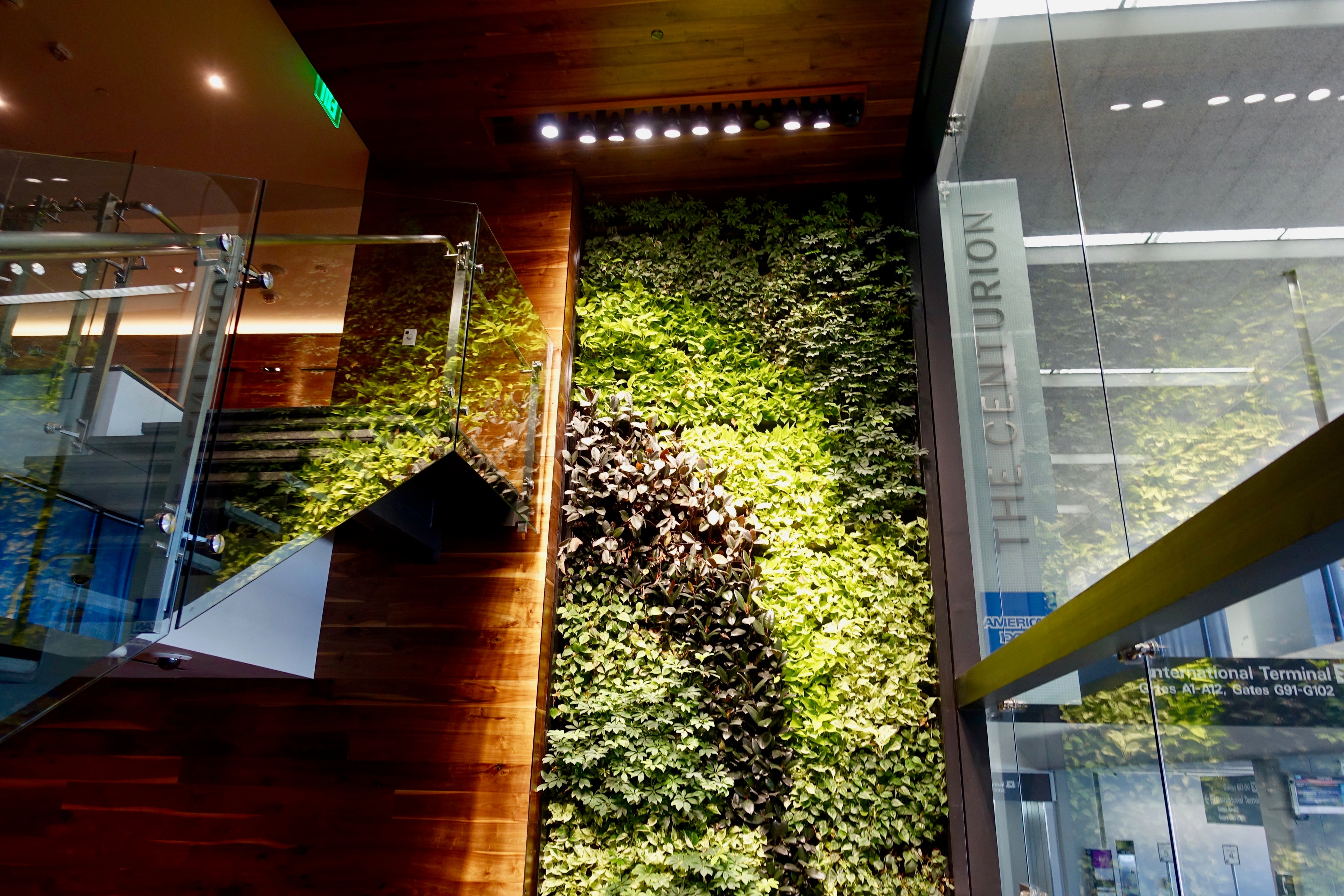 As the popularity of American Express

Centurion Lounges continues to grow, so have the complaints about them — in particular, TPG readers have noted overcrowding and inconsistent service as being serious drawbacks to an otherwise superb lounge experience. While each one is designed to pay homage to its home city — in San Francisco, vintage images of the Golden Gate Bridge adorn the walls and newspaper readers can pick up a copy of the San Francisco Chronicle — all have the trademark contemporary design of the Centurion brand. Meals are cooked in-house and almost all the domestic Centurion Lounges feature menus created by celebrity chefs, like James Beard Award-winning chef Justin Yu in Houston and chef Cédric Vongerichten, one of Zagat’s 30 Under 30, in New York. Several locations also offer signature amenities based on their home cities, like spa services in Miami and a Napa Valley-themed wine bar in San Francisco.

We wanted to find out for ourselves: Are the Centurion Lounges living up to the hype or succumbing to the same fate as other domestic lounges? In typical TPG fashion, I spent the first week of August traveling 7,500 miles and reviewing every single Centurion Lounge in the US. You can find Centurion Lounges in San Francisco (SFO), Seattle (SEA), Las Vegas (LAS), Houston (IAH), Dallas (DFW), Miami (MIA) and New York (LGA) — a new one in Philadelphia (PHL) is set to open later this year. Here's a look at the route I took:

To get as close to an accurate representation of a typical day, I spent a minimum of three hours in each lounge and only visited during lunch and dinner time, evaluating the Wi-Fi, seating, food and beverage options, amenities and service. We'll be publishing a new Centurion Lounge review every Tuesday and Thursday starting this week, all leading up to the final rankings, so stay tuned to see how they checked out. Without further ado, here's a closer look at the Centurion Lounge at SFO.

Only Terminal 3 and International Terminal G are connected airside at SFO, so if you're flying out of Terminal 1 or 2, you'll have to clear security one more time.

The first thing you'll see is the imposing, large, two-story, glass façade that makes up the lounge entrance.

The check-in desk attendant greeted me as soon as I walked in and asked to see my Amex Platinum Card, boarding pass and ID. I asked if I could take a shower and to my surprise, there was no wait for the facilities — I was even offered a complimentary L'Occitane branded dental and shaving kit.

I entered the lounge at 11:40am and it was already more than half full — there were about 90 people and there's enough seating for 145. A main seating area offers multiple types of couches and chairs for visitors' work and lounging needs.

One of my favorite places to sit was on the green couches that were attached to the wall — they're very deep so you can sit comfortably and outlets on the sides of each section made it easy to plug in and charge my devices as I worked. Note that the couches tend to get taken up quickly, so make sure you arrive early for a spot.

A large, communal table near the computers also made a great spot to get some work done, with lots of lighting and power outlets in the center. Not pictured is the soundproof family room, where parents can leave their children to watch cartoons.

The corridor that connected the check-in area to the main seating area had large TVs displaying departure times so guests could note any delays or gate changes — an additional set of screens was located near the bar.

Also near the main check-in desk was a little nook with two couches, two chairs and a large flat screen TV with CNN playing in the background.

Behind the TV wall was a secluded area with comfortable arm chairs and a small table. As you can see in the photo below, someone got creative and turned two of the chairs into a make-shift bed.

A large glass wall of wine welcomes you to the lounge's dining area.

The dining room was spacious and I had no trouble finding a seat. Not once during my visit did I see anyone using the reserved tables that were clearly marked and set aside for Centurion cardholders.

One section of the dining room had windows that let in light from the tarmac. Unfortunately, you won't see any planes though, as this lounge isn't connected airside.

I arrived just in time for lunch and the food was delicious. The SFO lounge's menu was created by award-winning chef Daniel Patterson, a leading proponent of California Cuisine and founder of Coi and Alta CA.

Below, pictured on the left, is the pork shoulder with coconut milk, ginger and lemongrass. It was tender, flavorful and paired well with the potato puree with infused rosemary, pictured on the right.

I'm not much of a vegetable fan, so for the sake of the review, I helped myself to a small serving. Below, on the left, is farro salad with shaved fennel, feta, lemon and mint; pictured on the right is sautéed kale with lemon chile flakes and extra virgin olive oil. Both tasted incredibly fresh.

Near the TV wall and check-in desk was a small counter with coffee, tea and banana bread. I'd suggest checking these areas, since the lounge attendants often placed small snacks there.

In front of the large selection of vegetable toppings was dessert, with a choice of oatmeal cookies (left) and creamy chocolate mousse (right). I'm not ashamed to say that I took more than one of each.

At the bar, you'll find another flat screen TV, which was playing ESPN when I stopped by. Service at the bar was quick — granted, it was only lunchtime. Drink options included a wide selection of fountain sodas, cocktails and beers, and there's a bartender. As always, everything — including the premium drinks — was complimentary, and I found that many patrons tipped generously.

I usually grab a White Americano whenever I stop by this lounge, so was pretty disappointed to find the Espresso machines were out of order this trip. When they're actually working, you can whip up a quick espresso, latte, coffee or hot chocolate.

Fortunately, there were two coffee urns — regular and decaf — placed to the left of the buffet area in the kitchen.

A special amenity at the SFO lounge is its complimentary wine tasting. To get started, simply go up to the bartender and ask for a tasting card, a receipt that gives you five free pours from the automatic wine machine.

There was a selection of 18 bottles — all sourced from nearby Northern California wineries.

According to the gentleman who sat next to me, each pour was "less than an ounce." After finishing, he politely asked for a second round and his request was granted, though I wouldn't expect that to be the standard policy.

The shower at the SFO Centurion Lounge is impressive. I'd suggest that upon check-in, you ask the desk attendant to place your name on the shower list. Fortunately, there was no one using it before me this time around, but I've had to wait more than two hours on past visits.

The room itself was spacious, with more than enough space to spread out your luggage and freshen up before heading out to the gate.

There were two iMacs for guests to use and I found that the free printer worked flawlessly.

I checked the Wi-Fi speed around 1:30pm after realizing that I couldn't get any work done because the connection was so slow. The download speed clocked in at a whopping 0.59mbps, which was consistent after running multiple tests. Instead, I opted for SFO Airport's Wi-Fi, which recently performed well on Speedtest's Airport Wi-Fi rankings.

It's always a hard day when you have to knock your home airport's Centurion Lounge, but it's safe to say this was the worst visit to this lounge I've ever had. The lounge itself has a generous layout, with lots of open space and work areas, but it's also hidden in the airport with window views of TSA security lines and gate areas instead of a lovely view of the tarmac. The attendant at the check-in desk was friendly when I asked about the shower, the beverages were abundant and the food was delicious and quickly restocked whenever it ran out.

While there were some good qualities, this visit was certainly not on par with the level of service that the Centurion Lounge likes to project — the coffee machine was broken, it took more than 30 minutes for lounge attendants to take someone else's dirty dishes from my table, Wi-Fi was atrocious and even though the lounge was only at 62% capacity, certain guests were taking up way more space than necessary, which could have made it difficult for groups to sit together. Here's my score:

Stay tuned every Tuesday and Thursday starting this week for reviews of the other six domestic Centurion Lounges, all leading up to the final rankings in mid-September.

Have you visited the San Francisco Centurion Lounge? Tell us about your experience, below.