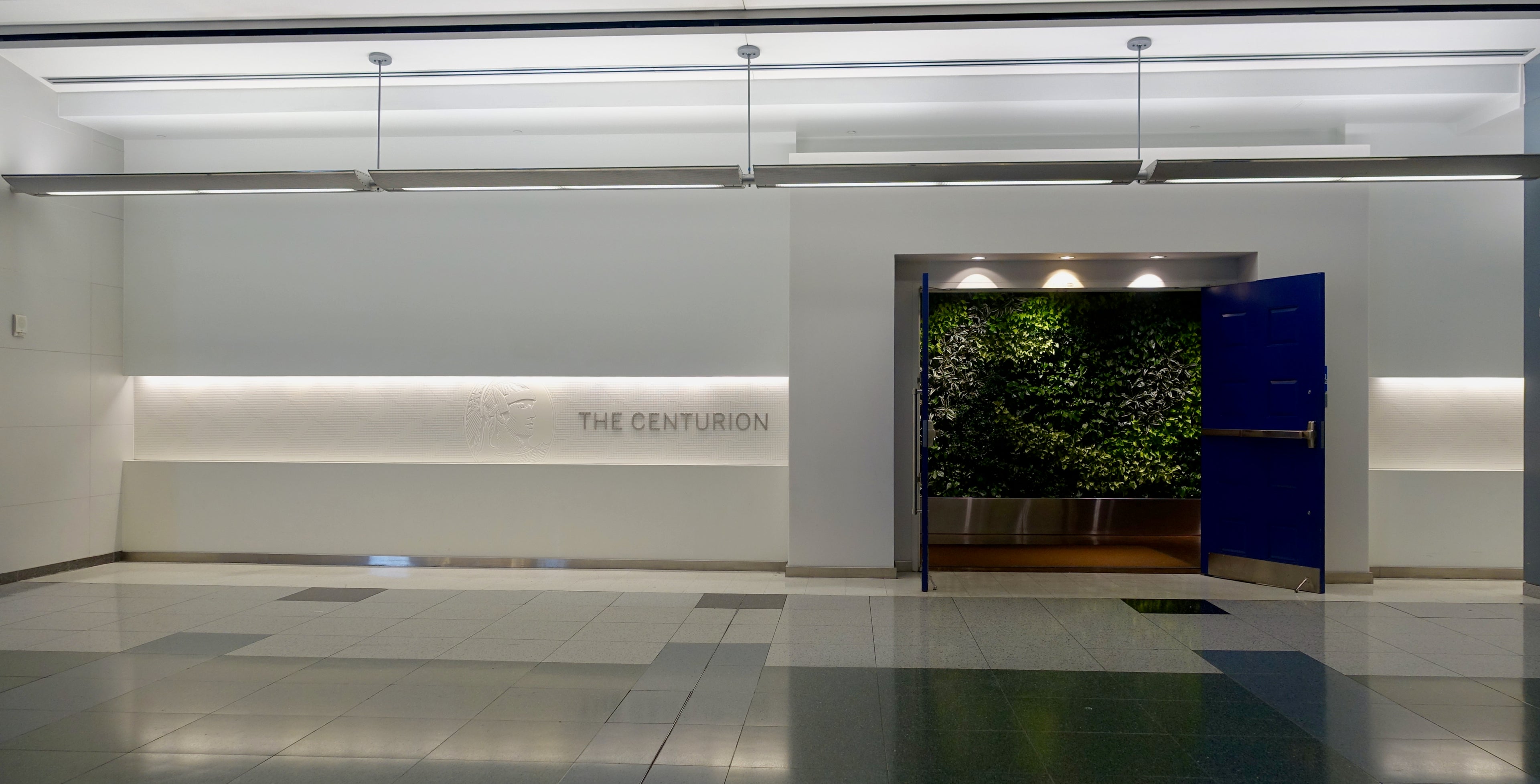 As part of my visit to every Centurion Lounge in the US, it was time to take on Las Vegas (LAS). So far, this whirlwind adventure has been a great opportunity for me to take a deeper, more analytical look at the services these lounges provide.

My mission: to find out if Centurion Lounges in the US are living up to the hype or succumbing to the same fate as other domestic lounges. In typical TPG fashion, I spent the first week of August traveling 7,500 miles and reviewing every single Centurion Lounge in the US. You can find Centurion Lounges in San Francisco (SFO), Seattle (SEA), Las Vegas (LAS), Houston (IAH), Dallas (DFW), Miami (MIA) and New York (LGA) — a new one in Philadelphia (PHL) is set to open later this year. Here's a look at the route I took:

To get as close to an accurate representation of a typical day, I spent a minimum of three hours in each lounge and only visited during lunch and dinner time, evaluating the Wi-Fi, seating, food and beverage options, amenities and service. We'll be publishing new Centurion Lounge reviews twice a week, all leading up to the final rankings, so stay tuned to see how they checked out. Without further ado, here's a closer look at the Centurion Lounge at LAS.

You'll find the LAS Centurion Lounge after security in Concourse D near Gate D1. If you're arriving at another gate, you'll be happy to know that each concourse is easily accessible airside via the Automated People Mover (ie. air train). My flight from SEA arrived in the D Gates, so it took me less than five minutes of walking to get to the lounge, though it shouldn't take much longer if you're arriving elsewhere because the inter-terminal trains operate flawlessly every few minutes. It's open every day from 5:00am to 11:00pm.

Since I arrived late in the evening, there was only one attendant at check-in — luckily, there were no people in line. I asked for a quick photo and the desk attendant was more than happy to oblige, even making sure to tidy up the area, not that it even needed any cleaning.

As soon as you walk in, you'll be greeted by a marble member services desk. There wasn't anyone manning it, so I didn't have the opportunity to ask what this was used for, though it's likely used for concierge requests.

At 8:20pm, there were around 80 people in the lounge, which had about 175 seats. As soon as I walked in, I noticed how spacious it was — there was certainly a wide variety of seats, certainly more than enough for anyone entering the lounge at the time. If you're quickly grabbing a cup of coffee before your flight, these two seats, pictured below, are ideal since they're right by the entrance.

Just to the right after the entrance was a dimly lit private area with two arm chairs and a large table. It's not the best location to get work done since the table is quite low to the ground, but it still made a good spot to relax, place a bowl of fruit on the table and read the news.

To the left was a pathway to the dining area with more seats — I enjoyed eating dinner here because it was so quiet.

In the main seating area, there was plenty of lighting, but I imagine it's even brighter in here during the day because of the large floor-to-ceiling windows that make up most of the lounge.

If you're into plane spotting, grab a spot in the center near the windows, but also note that this is much harder to do at night time. There were a lot of 2x2 facing seats in this lounge, which can be ideal for families and groups traveling together.

Toward the back of the lounge were more of the usual black cube seats. My favorite seats happened to be the green couches that were carved into the wall. These spaces were perfectly lit, comfortable enough to work or lounge in and offered plenty of privacy on your left and right sides.

A large booth spanned the entire wall that divided the dining room from the rest of the main seating area.

There were plenty of seats so you could grab dinner with any companions you might be flying with.

I wasn't that hungry once I reached the LAS lounge since I'd already filled up on a large helping of finger foods earlier at the Seattle location. Boy, was that a big mistake — this lounge had some of the best food I've ever tasted.

At the start of the buffet line were vegetables, in particular, an heirloom tomato salad that was offered at dinner time.

...as were oatmeal cookies (left) and dinner rolls (right).

I ended up getting a piece of chicken, the bruschetta, an oatmeal cookie and a dinner roll. If I had the opportunity to fly to any Centurion Lounge of my choice, it would be to whichever was serving the lemongrass chicken, which had such a delicious flavor, with a crispy outer shell and was juicy on the inside. The other food was tasty in its own right, but the bruschetta was cold from being left out so long, which made it a bit unappetizing. It also took a while for the kitchen to restock the food, so I didn't have an opportunity to try a second helping.

The bar wasn't too busy and the bartender quickly made his rounds. The menu was almost always on the countertop — if it isn't, you can always ask for drink recommendations. The bartender said this location's most popular cocktail is the Chinese New Year, basically a mimosa that's made with an orange liquor. As usual, all the drinks in the lounge were complimentary.

If you'd like something lighter, you can grab some self-serve water, orange juice or iced tea.

Or head to one of my favorite parts of the lounge, the automatic coffee machine.

Unfortunately, there were five people in line ahead of me for the shower, so I snapped a few pictures of the men's bathroom, which looked just like all the other Centurion Lounge bathrooms by design. It was difficult to find though, so if you're in a hurry, ask a lounge attendant where it is — otherwise, it's toward your left when you first enter the lounge.

A pair of desktop computers and a printer were available.

There was also a soundproof family room, where little ones could play until it was time to board.

There's really not much to be said here — the Wi-Fi exceeded my expectations with incredible download speeds of 79.99 Mbps.

I wish I had more time to spend at the Las Vegas lounge, which was a real pleasure to visit after a long day of traveling. I really enjoyed the layout, even though it felt more like a single, long hallway rather than the usual open-air main room I'd gotten used to seeing in these lounges. There was plenty of space and most of the seats faced the tarmac, so it's a great spot to watch planes come in during the day. If I had one gripe, it would be that all my favorite seats — the green couches lining the walls — were constantly taken, though that's mainly my problem, not any fault of the lounge.

The food selection was one of the best I've had at a Centurion Lounge — the honey lemongrass chicken and bruschetta make for a killer combo, but it was slightly overshadowed by the small quantities, the time it took staff to refill the buffet items and a strange lack of dessert options. The beverage offerings were also on point and it didn't matter whether you craved a cup of coffee, juice or a cocktail — all were available at your disposal. Since there was a long line and I didn't have a chance to take a shower here, I checked out the bathroom and it seemed like the lounge attendants had neglected it for the night — there was toilet paper strewn across the floor of both stalls. The Wi-Fi at this location truly delivered, with impressive download speeds of 79.99 Mbps.

Overall, I had a great experience at this lounge, though it may have been due in part to the time I arrived, which was later in the night. While the service wasn't so great, the food, seating and Wi-Fi more than made up for the negative aspects.

Stay tuned for another review of the other domestic Centurion Lounges later this week, and two more on Tuesday and Thursday next week, all leading up to the final rankings in mid-September.

Have you visited the Las Vegas Centurion Lounge? Tell us about your experience, below.