Articles
Scott Mayerowitz is the executive editor of TPG and oversees all of TPG's editorial coverage. He previously was a reporter, then editor, at The Associated Press and reported for ABC News.
Follow
April 14, 2022
•
9 min read 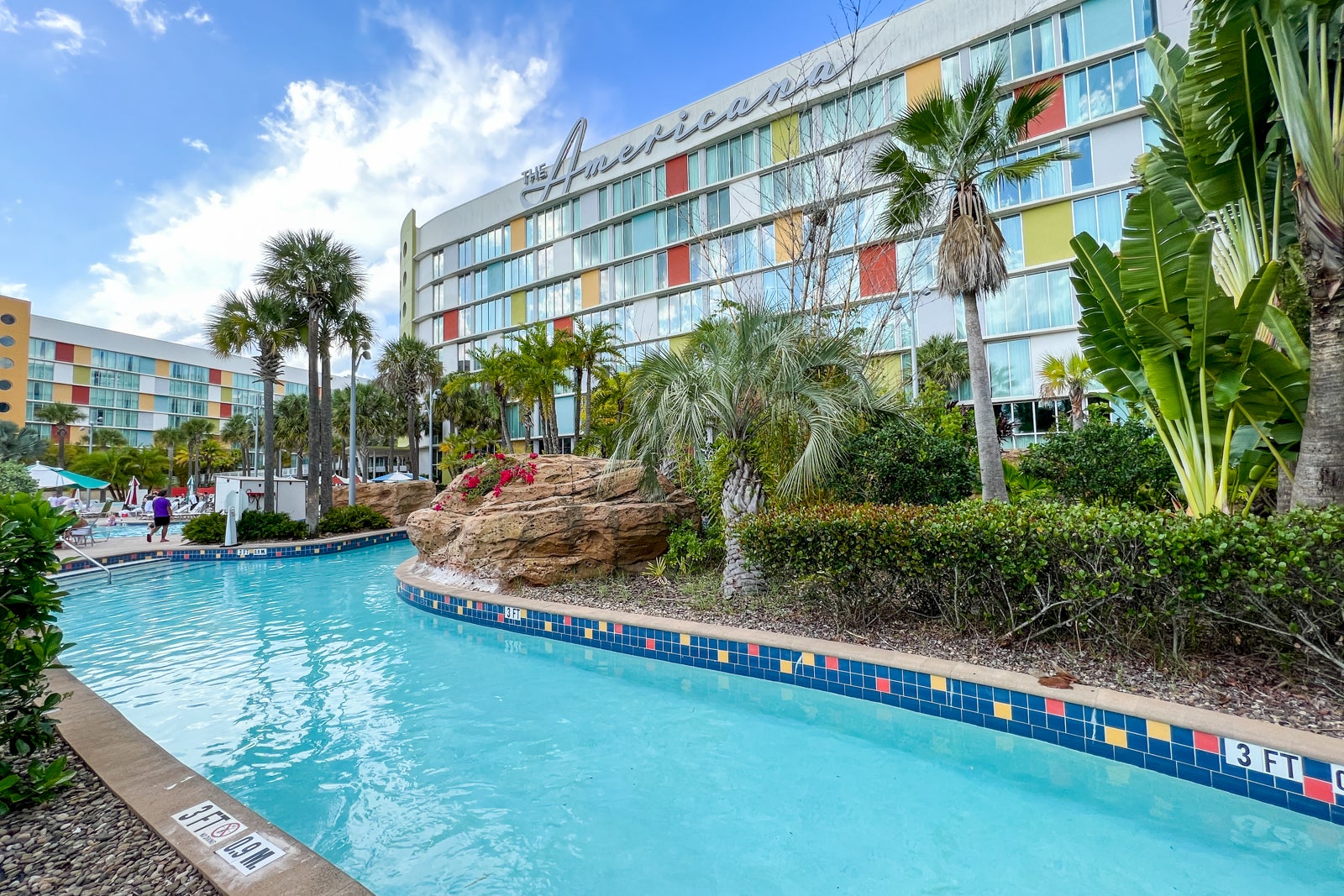 I’m a Grinch when it comes to themed hotels.

Usually, they fall short of the concept or end up doing things that feel forced.

Then I checked into the Cabana Bay Beach Resort at Universal Orlando Resort.

I had packed tempered expectations in my overnight bag, along with a bathing suit, but the property ended up restoring my faith in hotel designers who embark on creating a themed experience.

Sign up for our free daily newsletter for more TPG news delivered each morning to your inbox.

The property harkens to the Florida beach resorts of the 1950s and 1960s. Fans of "The Marvelous Mrs. Maisel" will know what I'm talking about.

Classic cars are parked outside. Rotary phones line a lobby wall. There's even a retro bowling alley on the second floor.

At every turn, little touches of the theme put a smile on my face — from the Jack LaLanne-inspired gym to the minibottle of VO5 shampoo and the bar of Zest soap in my room.

The designers at Universal and their partners at Loews Hotels, which operates the resort, pulled off both the minute and more ambitious aspects of the theme, all of which combined to make the property feel authentic instead of cheap or corny.

But there's more to the hotel than its charming vintage vibe. Here's everything you need to know about Universal's Cabana Bay Beach Resort.

The design is totally groovy

It's no secret that the Cabana Bay Beach Resort aims to provide guests with a nostalgic dose of yesteryear's beach vacation. But the tasteful commitment to this theme is what truly impressed me and my TPG colleagues.

The vintage airline posters adorning the walls, the classic automobiles lined up outside and the space-age features on display throughout made the hotel feel unique, as if I'd just stepped inside a meticulously curated time capsule.

Take the Jack LaLanne Physical Fitness Studio. Not only did this on-site gym offer all of the equipment you'd need to complete one of the TV fitness guru's workouts, which play nonstop on screens, but it showcased some of the late icon's trophies, photos and more.

Then there was the retro arcade featuring all the classic games you remember playing as a kid, including Skee-Ball. You can try to grab a Minion plush from the claw machine, too, when you're not catching a flick or hula-hooping by the main pool.

There was even an old-school bowling alley, which made me feel like I had been thrown into a scene from "The Big Lebowski."

As my colleagues and I bowled an evening round (which cost $13.99 per person for 45 minutes, shoe rentals included), I couldn't help but be impressed by the era-appropriate design of the space and the wide selection of bowling ball weights. Clearly, this hotel knew its audience, offering plenty to appeal to both sentimental adults and energetic little ones.

Know, though, that the lanes do sell out, so you'll want to reserve one early in the day to avoid missing out on some fun in this facility.

Its proximity to the parks is a major draw

These days, access plays a huge role in having fun at theme parks.

Like other popular parks in Orlando, Universal Orlando lets those staying at its eight on-site hotels, including Cabana Bay, into its theme parks an hour earlier than the general public and provides a 30-minute head start into its water park.

That can be a big bonus if you are looking to enjoy the hottest rides, such as Hagrid’s Magical Creatures Motorbike Adventure and the Jurassic World VelociCoaster, or you just want to cast some spells in The Wizarding World of Harry Potter without all the crowds.

Because the hotel sits within the Universal Orlando complex, you can also quickly reach the parks via free shuttle buses or on foot. It'll take you about 20 minutes to walk from the property to the main gates of Universal Studios Florida and Universal's Islands of Adventure.

For those looking to go to the Volcano Bay water park, specifically, this hotel is ideal. It is directly next to the water park (you can see the volcano from one of the two resort pools) and has its own entrance and security checkpoint just for hotel guests.

As a parent, finding a place to stay with my family that won't break the bank is important, especially for theme park vacations that can quickly get expensive.

So, imagine my surprise when I found single-serve cartons of milk and juice in the cafeteria for the affordable price of $1.49 each. I've seen many resorts like this charge more than $5 for a half-pint of milk.

Kids meals were budget-friendly, too: A hot dog with apple slices, carrot sticks and a juice, milk or water at the hotel's diner came to just $8.50. And for adults, there were domestic beers for $7.50 and minibottles of Sutter Home wine for $8.25. Well, budget-friendly for a resort.

Even my room rate was surprisingly reasonable. While I didn't expect exorbitant prices since the resort is considered a "prime value" property (or one in the second-lowest cost bracket of Universal's four-tier categorization system), the $279.77 I paid for a one-night stay, including all taxes, seemed more than fair as it fell during one of the country's spring break weeks. Again, not necessarily affordable but reasonable for the peak season.

The rooms are inviting and well appointed

Spread across eight buildings, some of which are not connected to the lobby (a downside to an otherwise well laid-out complex, as afternoon thunderstorms are common in Florida), the hotel's 2,200 guest rooms and suites are decorated in a style befitting a property inspired by 1960s beach resorts.

Featuring a colorful but minimalist design, my room had everything I could need. There were two queen-size beds with bright orange headboards positioned against a bright blue accent wall, a small table with two yellow chairs and a dresser with plenty of space to store clothing for every member of the family.

Although there weren't any USB plugs next to the beds, there were enough outlets above the nightstand to charge all of my devices. (Strangely, there were two USB plugs near a corner table.)

The upgraded Wi-Fi was fast enough to make video calls and upload photos as well, though this option costs an extra $9.95 per day. If you're not planning on working during your stay, you can easily get by with the complimentary standard internet.

The bathroom was just as welcoming as the bedroom, offering a bathtub-shower combo (a much-appreciated amenity for families that's becoming increasingly difficult to find in hotels) and a separate sink area with a matching blue feature wall. In short: It did the trick.

You'll have 2 excellent pools to choose from

As you may expect, this Universal property touts a top-notch pool scene befitting a hotel with an old-Florida beach vibe.

The two zero-entry pools are perfect for kids. One features a lazy river, while the other boasts a waterslide built into an old-school diving tower. Yes, those once were a thing.

Both offer up racks of life jackets, and there are self-serve stations where you can grab fresh towels.

While there were pockets of shade during my visit, the pool areas could admittedly use some more trees and umbrellas to shield swimmers and sunbathers from the sun.

The real highlight, though, came at night when each pool area transformed into a chill, midcentury modern oasis. Palm tree trunks dazzled with string lights as guests gathered around fire pits to roast marshmallows and make s'mores using kits sold on site.

I don't normally associate Florida with campfires, but I enjoyed seeing people capping off their day in such a classically mellow way.

Universal's Cabana Bay Beach Resort is a solid choice for a Central Florida vacation spent at the parks. It's by no means the nicest place I've stayed at, but it may be one of the most fun, thanks in part to its cool retro design. In fact, despite being a massive property by almost any scale, it was one of the most charming hotel designs I've encountered in quite some time.

While you could find a cheaper hotel off the resort grounds, the easy access to Universal's theme parks — including that coveted early hour of admission — and array of on-site amenities make this reasonably priced property well worth a visit.

When you come to a large theme park like Universal, the goal is to have fun. And Cabana Bay more than delivers on keeping the fun going back at the resort.

Featured image by The lazy river at Universal's Cabana Bay Beach Resort. (Photo by Scott Mayerowitz/The Points Guy)
Editorial disclaimer: Opinions expressed here are the author’s alone, not those of any bank, credit card issuer, airline or hotel chain, and have not been reviewed, approved or otherwise endorsed by any of these entities.