An upgrade worth the investment: 7 thoughts from my first Southwest Airlines flight in nearly 18 months

Articles
Zach Griff is a senior reporter at TPG. He writes travel and product reviews, deep dives into loyalty programs, news about the airline industry and more.
Follow
May 15, 2021
•
8 min read 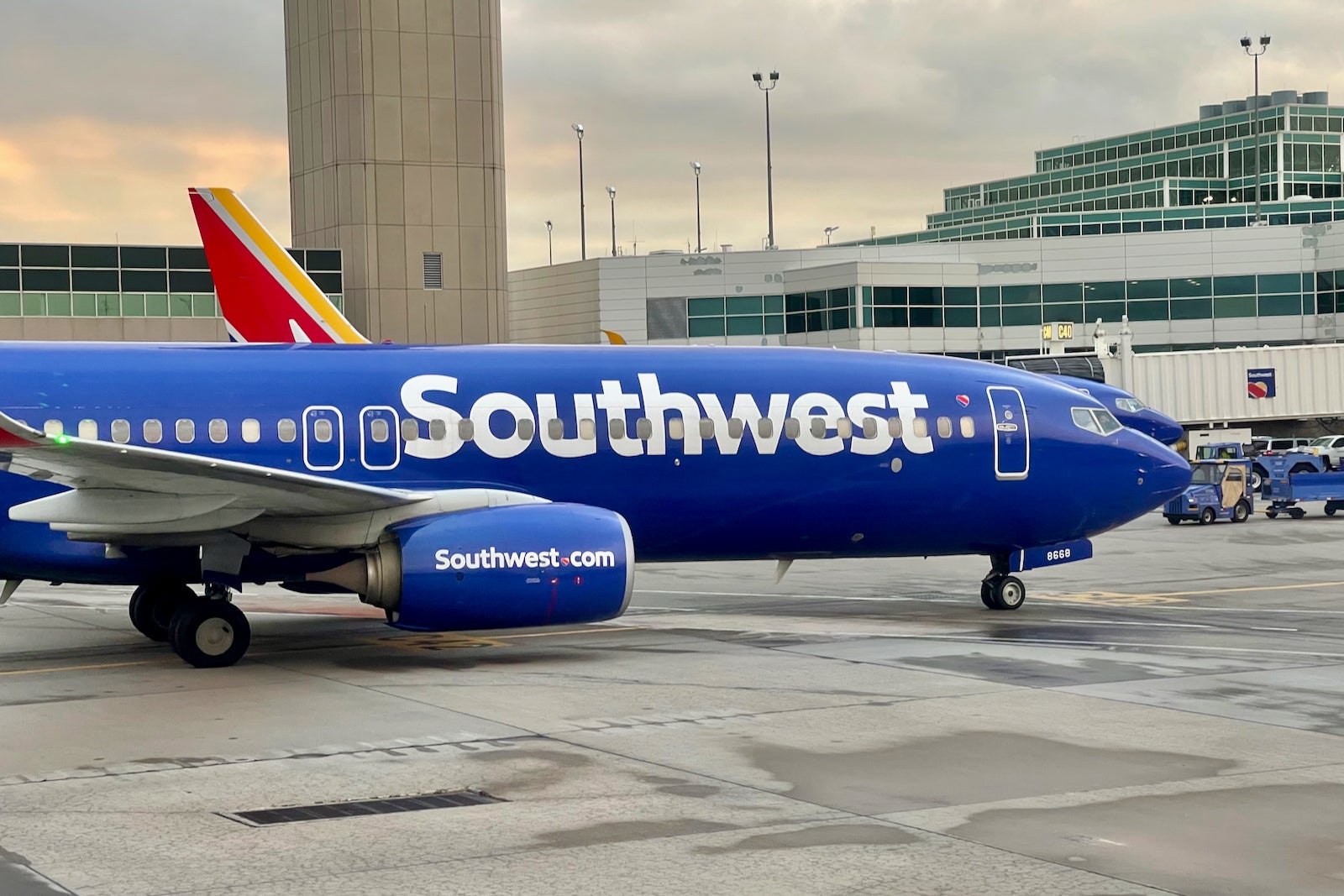 Southwest Airlines is one of the largest domestic carriers in the U.S.

The airline, known for its lightning-fast turnaround times between arrival and departure, operates an all-Boeing 737 fleet with more than 4,000 daily peak departures before the pandemic.

Though Southwest blankets most of the country with its blue, red and yellow jets — in fact, the carrier has launched or announced 17 new destinations since the pandemic began — its route map has a noticeable gap in coverage in New York City. Southwest flies to just 12 cities from LaGuardia (LGA), and it doesn't serve New York-JFK and no longer flies to Newark (EWR), per Cirium schedules.

So, being based in lower Manhattan, I don't frequently fly with Southwest. My last flight with the Dallas-based carrier was in January 2020, from Oakland to Seattle.

Fast forward nearly 18 months (and a pandemic) later, and I had another opportunity to fly with Southwest. I needed to get between Denver and Las Vegas, so instead of flying United, Frontier or Spirit (which I've all recently reviewed), I decided to change it up and choose Southwest.

Read on for how it went.

All three of America's traditional U.S. network carriers operate a large network of airport lounges, both at hubs and popular outstations.

Southwest, with its low fares and all-coach cabins, doesn't have any lounges, so you'll need to wait in the terminal.

However, since I was flying from Denver, I had the opportunity to visit the recently opened American Express Centurion Lounge located just steps away from Southwest's gates in the C concourse. Having access to the lounge was a great way to spend an hour catching up on work and grabbing a last-minute bite to eat.

Unlike airline-branded lounges, Amex outposts, as well as lounges that belong to the Priority Pass network, can be accessed regardless of which airline you're flying, meaning that tickets on Southwest (and its competitors) qualify for access.

Sitting in the gate area would've been fine too, though it got quite crowded as the flight departure drew closer.

Business Select was worth the investment

I booked roughly a week before departure and decided to splurge for Southwest's most expensive fare class, Business Select. The carrier offers three fares for its flights, which were priced at $195 for Wanna Get Away, $233 for Anytime and $273 for Business Select for my short two-hour hop.

I thought the $75 upgrade to Business Select was reasonable and worthwhile.

For one, Anytime and Business Select tickets are fully refundable to the original form of payment. Wanna Get Away fares, on the other hand, can be changed or canceled for free, but the value must be reused by the originally ticketed passenger within 12 months of the booking date.

When I booked my trip, my meeting in Las Vegas wasn't 100% confirmed — there was still a chance I might need to cancel. Had I needed to cancel a Wanna Get Away fare, I would've been stuck with Travel Funds that I might not have used within a year.

Business Select also includes free same-day confirmed changes, which could've come in handy if I arrived at the airport well ahead of departure, as well as a host of other perks.

But best of all, by purchasing Business Select, I significantly improved my chances of scoring an exit-row, extra-legroom seat.

Southwest doesn't have assigned seating. Rather, you board in an assigned order based on the order in which you checked in, and once on the plane, you can choose whatever seat you'd like.

Business Select guarantees you a boarding position within A1 to A15. I checked into my flight right at the 24-hour mark and snagged the coveted A1 position.

I was first on the plane after a group of pre-boarders (who are barred from sitting in the exit row), so I grabbed my favorite seat on the carrier's 737-700, the port side exit-row window that doesn't have a seat in front of it.

Related: How to get the best seats on Southwest Airlines

The seats are actually quite comfortable

My flight was operated by a nine-year-old Boeing 737-700, registered N968WN, outfitted with 143 coach seats arranged in a 3-3 configuration.

Unlike other low-cost carriers, the seats on the Southwest jet were noticeably well-padded and actually quite comfortable for the two-hour ride to Vegas.

All seats sport roughly the same amount of legroom, except for the bulkhead and exit row.

No screens, no problem

Southwest doesn't outfit its jet with seat-back entertainment screens. Instead, the carrier offers free streaming entertainment, which was more than enough to keep me occupied on the short hop.

This includes 12 channels of live TV and 49 pre-loaded movies for the month of May, with the full list of titles available here.

If you want to upgrade to full internet access, that'll set you back a modest $8 per device. Speeds were okay, at 10 Mbps download but just 0.55 Mbps upload. Another generous move on Southwest's part is that the Wi-Fi package can be used across all connecting flights on the same day as your initial purchase.

Unfortunately, Southwest doesn't offer in-seat power outlets or USB ports on any of its Boeing 737s.

That means you'll need to make sure your devices are fully charged before boarding or travel with a portable battery pack to keep your electronics juiced up.

For longer flights, the lack of power outlets could be make-or-break for a business traveler.

Right now, the airline doesn't offer juice for your devices, nor for human consumption.

Southwest initially suspended all onboard beverages and snacks due to the pandemic. However, as of mid-March 2021, the airline is now serving a limited selection of non-alcoholic beverages and snacks for flights over 250 miles. These include Coke, Diet Coke and 7Up, in addition to water. For all other flights, snack and beverage service is still temporarily suspended.

On my flight, the friendly flight attendants passed through the cabin taking drink orders. They then returned with pre-poured cups filled with our drink preference. Though Southwest is "still limiting selections to support the wellbeing and comfort of our Customers and Employees," the airline is noticeably behind its competitors on returning to pre-pandemic levels of inflight service.

You still won't find any hot beverages, juices or alcohol on Southwest. (Since the airline isn’t serving alcohol right now, it’s extending any expiring drink coupons through at least the end of 2021.)

The airline used to offer a selection of snacks to choose from, but that's now been replaced with a non-branded snack mix containing pretzels, cheddar cheese squares and ranch bagel chips.

All things considered, my Southwest flight wasn't much different than the average run-of-the-mill domestic hop — except for the crew.

Everyone I interacted with, from the Denver-based check-in agent to the inflight crew, seemed genuinely excited and happy to be there. I was welcomed back to Southwest multiple times during my travel journey, and I even witnessed flight attendants cracking jokes with customers throughout the flight, something I rarely see on the other network carriers, like American or United.

On my flight, there were seven passengers who use wheelchairs who needed to pre-board. Both pilots had grabbed a bite to eat in the terminal before boarding, and perhaps most impressively, instead of just walking back down the jetway to the cockpit, they both escorted the passengers onto the plane.

Every airline has a mix of friendly and less friendly employees, but in my experience, it's the crew more than anything that really sets Southwest apart.