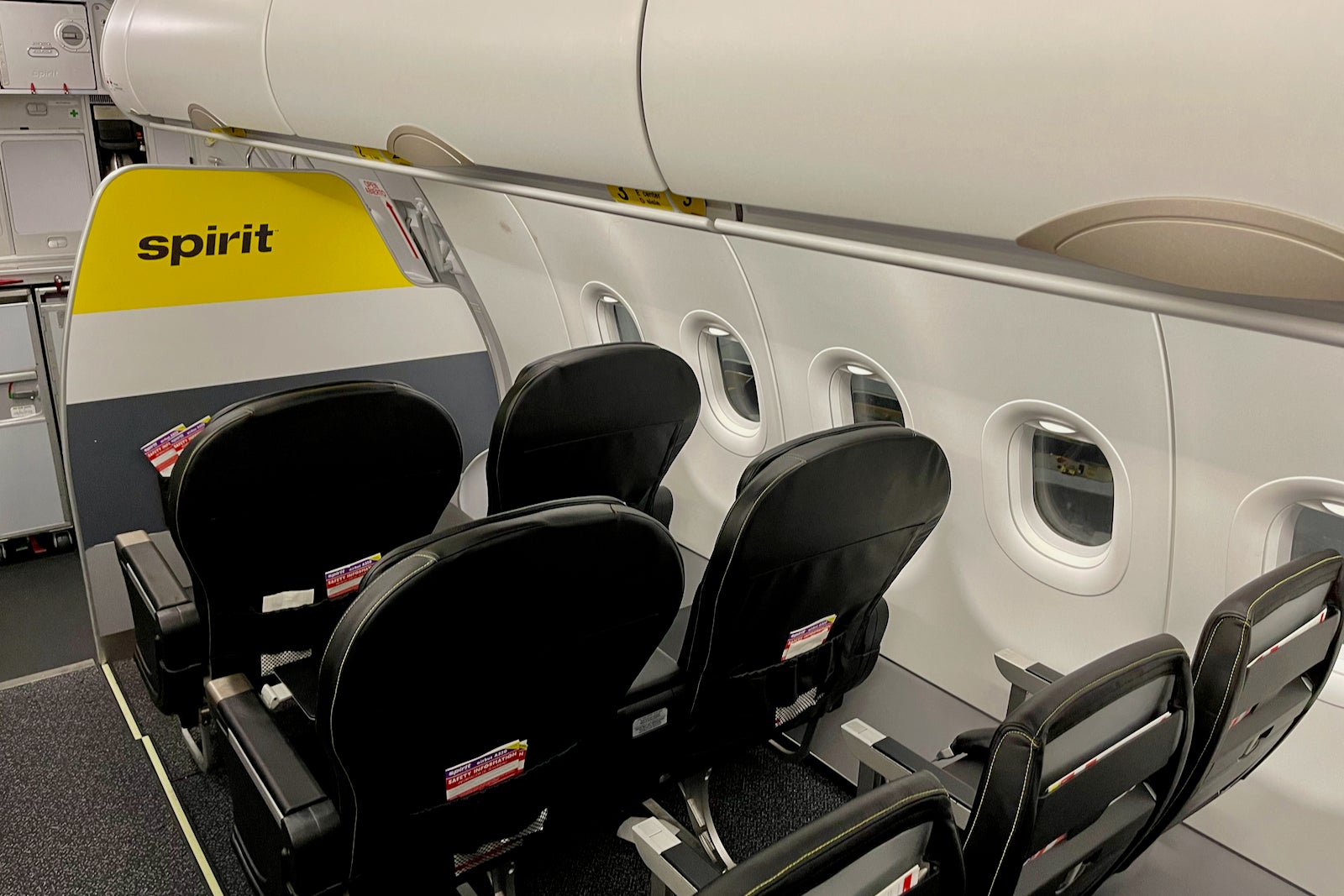 8 thoughts from my first Spirit Airlines flight in over 3 years
This post contains references to products from one or more of our advertisers. We may receive compensation when you click on links to those products. Terms apply to the offers listed on this page. For an explanation of our Advertising Policy, visit this page.

I usually filter out ultra-low-cost carriers when searching for flights. The a-la-carte experience doesn't include seats or bags, and I often end up paying a similar all-in fare to a full-service airline.

These days, however, flight schedules are limited. I was recently faced with the choice of a nonstop flight on Spirit or a connecting itinerary with United, as I originally shared on my Instagram page (follow along there).

For the three-hour hop from NYC to Florida, my pick was immediately clear: it was time to travel with Spirit for the first time in over three years.

Turns out, I wouldn't hesitate to do it again. Here's why.

No waiting in security

When TSA PreCheck first launched in 2013, it only worked with a handful of airlines. Some of America's largest discounters, including Spirit, were noticeably missing from the list.

Without PreCheck, it's hard to predict how long it'll take to clear general security. Now that Spirit's part of the program, I'm much more comfortable arriving at the airport just minutes before boarding, knowing that I'll have expedited security.

But it gets even better. Spirit currently departs from Terminal C at LaGuardia, which is shared with Delta. (Spirit will shift some of its operations to the Marine Air Terminal beginning on April 28.) There's a Clear checkpoint in Terminal C, and Clear works with all airlines, so I was through security in under five minutes.

Related: TSA PreCheck vs. CLEAR - Which one to get

Spirit packs 228 passengers on its Airbus A321. For context, the same plane flying for JetBlue is outfitted with 200 seats.

Despite the dense configuration, I was impressed with Spirit's efficient boarding process. All travelers who purchase a full-size carry-on board with group 1. Everyone else boards in the following three groups.

Since most flyers only brought a small personal item, no bags needed to be gate-checked. Passengers quickly took to their row, and there was plenty of overhead bin space left for everyone's bags.

On my return flight with JetBlue, we waited over ten minutes on the jetway for the gate agent to process over 30 gate-checked bags, which significantly delayed the boarding process.

The seat can't be beat

Every Spirit plane is arranged in an all-coach configuration, but the seats aren't created equally.

The first two or three rows of each jet feature Spirit's top offering, the Big Front Seat. With a 2-2 arrangement, 36 inches of pitch and 18.5 inches of width, this is essentially a domestic first-class seat — for the price of a coach ticket.

Selecting a Big Front Seat ranges in price, depending on the route, fare class, time of purchase and other factors. My upgrade cost $88, though I've seen these seats go for $45 on the same route during online check-in.

Compared to paying $500 (or more) to fly in first-class on a legacy carrier, I'd say this was one heck of a deal.

The seat was quite comfortable for a roughly three-hour flight down the Atlantic coast, and I particularly appreciated that I had just one neighbor. Plus, the Big Front Seat's favorable location means that you'll be one of the first to deplane.

Spirit's Big Front Seat is about as good as it gets in economy, but it's not without flaws.

My biggest complaint is that it's "pre-reclined." While I found the seat itself comfortable for a three-hour flight during the day, I'd hesitate to book it for a domestic red-eye.

Another minor inconvenience is that the headrest isn't winged, limiting how much neck support the seat offers.

All in, though, the Big Front Seat is reason enough to choose Spirit again.

If the first few rows are booked, I'd likely splurge for one of the exit rows, which offer enough legroom for even the tallest of passengers. The armrests are fixed, cutting into the already tight width, but at least there's plenty of space for your feet.

Service is quick and easy

You get what you pay for on Spirit — there's no complimentary food or drink service on board.

Instead, flight attendants came through the aisles with a cart and offered flyers a choice from the inflight menu. Options included $3 Coca-Cola-branded soft drinks, $11 cocktail combinations, $3 snacks and food and drink combos that range from $4 to $30.

Of course, it'd be great if Spirit offered free nosh, but here's the thing: these days, the major U.S. airlines aren't offering much more than a small snack pack with an 8.5-ounce bottle of water and a 60-calorie bag of pretzels.

In fact, until the pre-pandemic service returns to the Big 3 airlines, Spirit offers a more robust inflight service than the legacies (though it comes at a cost).

No Wi-Fi or power

For me, this is a big downside. Spirit doesn't offer any form of inflight entertainment.

This means no movies or live TV, nor does the carrier offer Wi-Fi or power outlets.

Staying connected, especially while working remotely, is incredibly important, so I won't fly Spirit during a business day. Fortunately, Wi-Fi is on the way.

The carrier delayed its Wi-Fi rollout in late 2019, but it's expected to be finished in 2021, barring any additional hiccups. Spirit says that the average price will be $6.50, depending on the route and demand.

Plus, the carrier is working with Thales for its high-end Ka-band HTS (High Throughput Satellite) system, dubbed FlytLIVE, which should support inflight streaming through Netflix, Hulu and other popular sites.

The points are actually worthwhile

Despite the pandemic, Spirit overhauled its loyalty program earlier this year.

The all-new Free Spirit program comes with legitimate elite-status tiers, valuable perks and a more relaxed mileage expiration policy. Spirit's old program was "dated" and "underperformed," but this new one is a marked improvement.

Points earning and redemptions are still revenue-based, but co-branded credit card members and those with elite status can form pools to boost account balances and get closer to more valuable redemptions.

As we were cruising at 35,000 feet (without Wi-Fi), I made a mental note to sign up for Spirit's program and claim retroactive credit for the flight after landing.

Spirit's deals might be too good to pass up

On this flight from New York LaGuardia (LGA) to Fort Lauderdale (FLL), my decision was easy. I far prefer the convenience of a nonstop flight, especially for a short hop down the coast. Connecting in Atlanta, Charlotte or Washington to fly a mainline carrier just wasn't worth it.

Spirit's value proposition is definitely worth considering even when there are other nonstop options.

Take a look at this example of nonstop flights from FLL to Denver (DEN). The Southwest flight is pricing at $255 as of press time. Even if you purchase the Big Front Seat and a full-size carry-on bag, you'd be out $57 for the flight, $78 for the seat and $38 for the bag, totaling $173.

That's well below the Southwest and United flight — and you'd be flying in a much more comfortable seat than both carriers.

If I was faced with the above choices, I'd seriously consider Spirit, especially given how pleasant my recent experience was.