Articles
Ethan Steinberg has been a frequent flier for as long as he can remember. He went from studying abroad in Paris to moving to Shanghai after graduating college, where he covered all things travel in the Asia-Pacific region for TPG.
May 20, 2018
•
8 min read 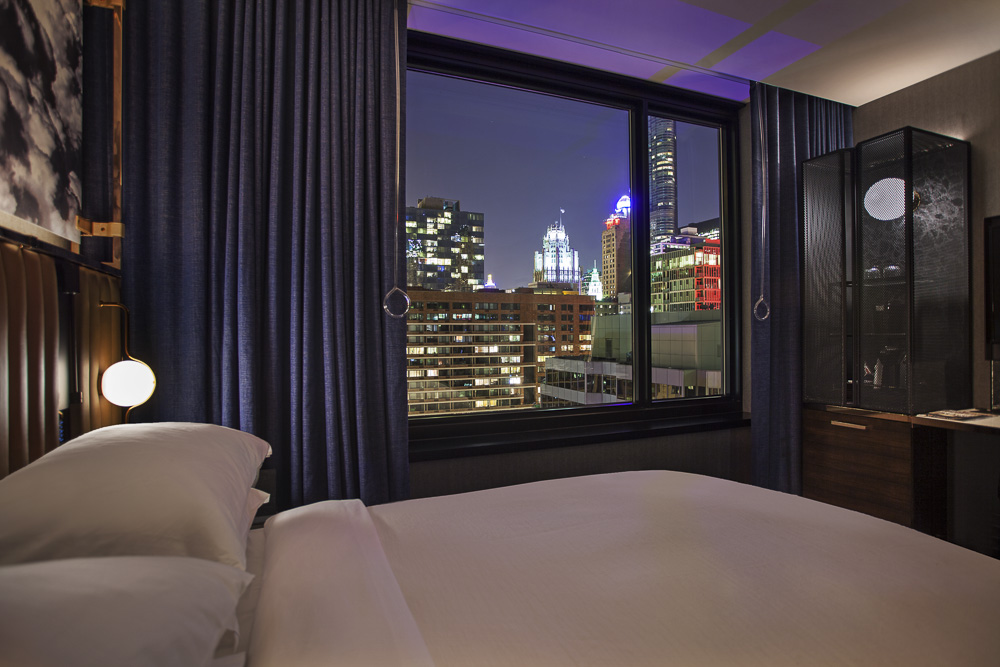 Marriott's Autograph Collection can be a bit of a mixed bag. Some hotels take full advantage of the opportunity to showcase their creativity and uniqueness, while others fall short of their lofty promises. I'd heard great things about Hotel EMC2 in Chicago from a friend, but I'll admit I didn't get it at first (please don't tell my physics professor!). On the hotel's website when I read that they claim to be the "intersection of art and science" (E=mc2, duh), I knew I had to check it out for myself.

Rates for this property were much lower than I was expecting for an Autograph Collection hotel in a major city, but I was able to book a one-night stay for only $133 after taxes.

I paid using my Marriott Rewards Premier Business Credit Card to earn 5x points for the stay. When added to the 15 points per dollar I earned as a Platinum elite, my total for this stay was 2,375 points. I also earned another 3,000 points thanks to Marriott's MegaBonus promotion. This was my second stay of the quarter, which earned me 2,000 points plus another 1,000 because my stay included a weekend night. All together, my 5,375 points were worth about $48 according to TPG's latest valuations, giving me a total return of 36% on my spend. Not bad! If I'd been looking to redeem points, this Category 8 property would've cost 40,000 points a night, worth about $360, so clearly paying cash was the way to go.

EMC2 is located in a prime spot, just a block and a half away from Michigan Avenue and the never-ending shops and restaurants on the Magnificent Mile. I liked that it wasn't actually on Michigan Avenue, though, as there was less traffic when I was coming and going. If the weather had been a bit nicer, I could have taken advantage of the five-minute walk to Navy Pier and its new and improved Ferris wheel. The hotel was about a 35-minute drive from both O'Hare (ORD) and Midway (MDW) airports, and less then half a mile to a CTA Red Line station.

Space is at a premium in downtown Chicago, and this hotel didn't waste an inch of it. In fact, I ended up walking past the entrance twice before figuring out which door to go in.

The lobby was incredibly narrow, with only a few feet separating the check-in desks from the elevator banks. If more than two people were waiting in line, this area could have gotten crowded quickly.

Thankfully, there was no wait, and I was helped immediately. A friendly agent gave me a breakfast voucher to use at the hotel's restaurant, Albert (as in Einstein, get it?) and explained some of the quirkier features of this property, like its 21st-century butler service. More on that later...

Thanks to my Platinum status, I was upgraded to a king room with a city view on the 14th floor. The hallway felt like a better-lit version of the W Chicago Lakeshore and even featured a cool LED display of Albert Einstein that was consistently doodling over itself, as you can see in these before and after pictures.

At 320 square feet, the room was barely larger than a standard guest room (285 square feet), and my supposed city view was just the sides of other tall buildings.

The bathroom was right inside the door and had a brightly lit mirror, as well as a little flower made out of newspaper in a test tube. The shower was exposed, with a privacy curtain that also blocked the bathroom, which is worth noting if you're traveling with someone. I loved the design of the room, with shiny brass pipes complementing the dark walls and floors. When buildings go for the modern industrial look, they often end up looking lazy and unfinished. The execution here was flawless, both in function and form.

On the left side of the desk was a brass horn with a card over it that said "music to my ears." If you put your phone in that slot, the horn amplified the sound so that it was louder than my computer at full volume — a really cool feature that more hotels should consider adding to their guest rooms! I don't know if I was the only one using the feature or if the hotel was just well-insulated, but I never heard a sound from any of the other rooms on the floor.

The room also featured an Amazon Echo Dot, along with a list of hotel-specific requests you could ask Alexa for.

Breakfast was free for Platinum members and served in the Albert restaurant on the other side of the lobby.

The spread was pretty standard and included eggs, bacon, oatmeal, yogurt, fruit and a special EMC2 blend from the local Sparrow Coffee. Once again, the attention to detail was fantastic. Above the food were loft bookshelves and more brass pans, creating a laid-back coffeeshop atmosphere. Meanwhile, hanging above the bar was a unique sculpture that was quite literally a mix of chemistry equipment and potted plants.

The food was good but not especially memorable, but my one complaint is that the restaurant ruined the relaxing atmosphere by blasting music from The Chainsmokers over the speakers at 9:00am.

The hotel had a gym on the fourth floor with treadmills, ellipticals, free weights and other machines. The mirrors on all four walls made the room feel much larger than it actually was, but I found myself awkwardly making eye contact with people behind me while on the treadmill.

My server at breakfast was top notch. With only three other customers in the restaurant, he devoted all of his attention to me, giving me a personal tour of all the food choices and making sure my coffee never dipped below half full. In fact, all the humans I interacted with at the hotel were incredibly nice.

That being said, the real stars of the show were the two robot butlers, Leo and Cleo.

These surprisingly intelligent droids could navigate their way around the hotel, delivering almost any items to the rooms in place of a human. (They couldn't deliver food because of health codes.) I put in a request for an extra, robot-delivered bottle of water at the front desk. A few minutes later, my TV turned on to alert me that my water had arrived.

Sure enough, Cleo was waiting outside my room with the waters and a quick two-question survey about its service and how I was enjoying my stay. Needless to say, I gave five Cleo stars.

When I first heard about the robots, I was worried they would be a little too gimmicky and not especially practical. It wasn't until I was leaving that I bumped into both robots navigating the elevators by themselves and realized just how much time and effort they can save.

I had a really enjoyable stay at EMC2 and loved the unique, the well-thought-out design and, of course, the super-helpful robots roaming the halls of the hotel. If the rates stay this low, I'd happily stay here again.