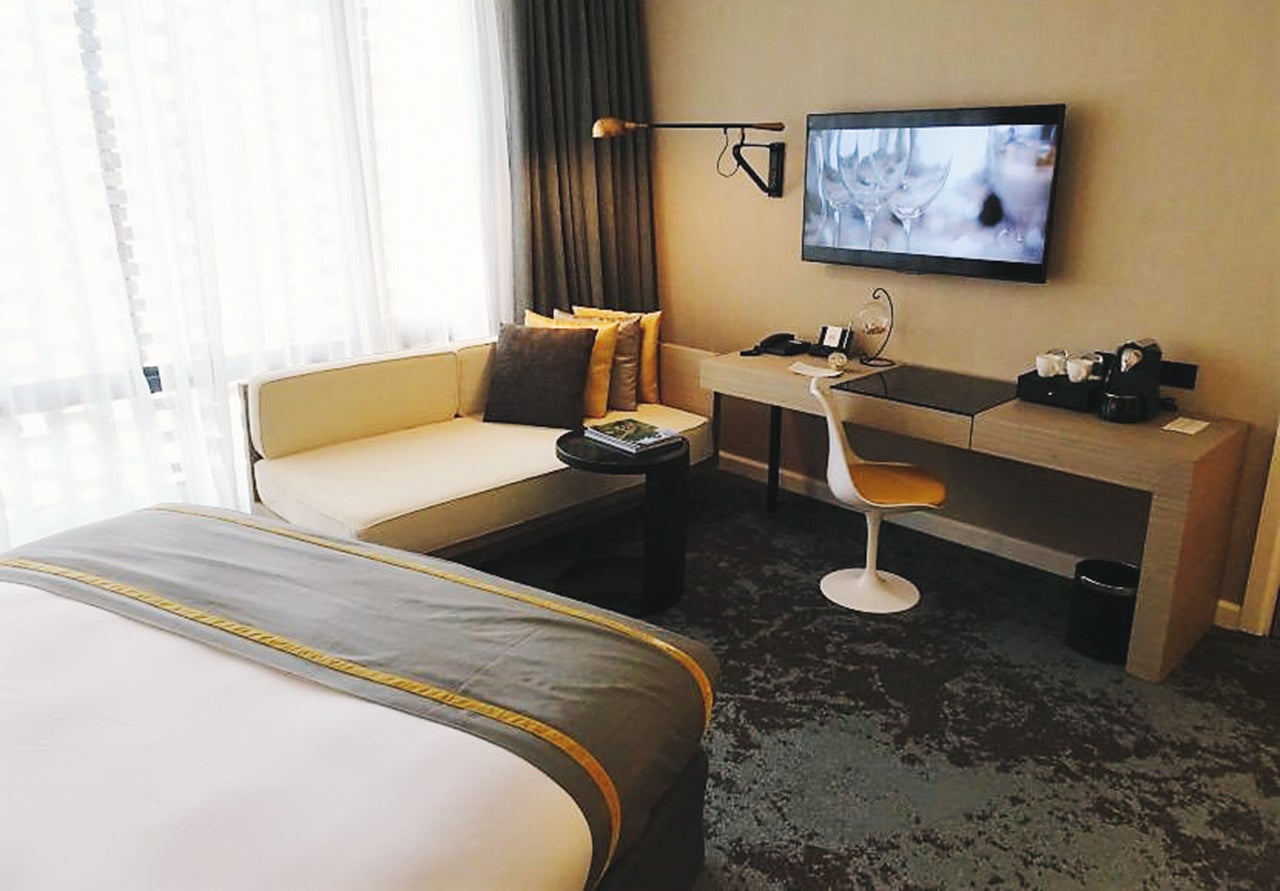 So I was very much looking forward to my stay at Hotel Stripes Kuala Lumpur, a property in Marriott's Autograph Collection that was less than three months old and already creating a stir.

With less than three months before it expired, I was eager to use the certificate for a free night I'd earned on the anniversary of opening my Marriott Rewards Premier Credit Card. The certificate is valid for properties in Marriott Categories 1 through 5, and Hotel Stripes is Category 3. I usually like to maximize the value of free night certificates, but I had no other upcoming travel planned where I could use this one, and free is free. I was offered an executive deluxe room in exchange for the certificate. (It would have cost 15,000 points without).

For my second night in the hotel, I booked a similar room (a deluxe) for $83.73 on my Chase Sapphire Reserve to get 3x Ultimate Rewards points. I counted on being able to combine reservations when I checked in, so I wouldn't have to switch rooms. As part of an exclusive offer, I selected the package targeted toward customers who had linked their SPG and Marriott Rewards accounts; this got me an upgrade, a free breakfast, a 4pm checkout and 1,000 bonus points (almost doubling the points I'd earn for the stay).

My flight got into KL at 2 p.m., and I opted for public transit to the hotel. Fifty-five ringgits for an express train and two more for a metro token ($13 total) got me within a couple blocks of the hotel in less than an hour. (My return to the airport in an Uber took less time for about $4 more; I'll do that both ways next time.)

The front-desk agent was able to combine my reservations and said I'd been upgraded to an executive deluxe room — the room I'd booked for the first night would be mine for both nights. With my Gold status (a perk of the Platinum Card from American Express), I was hoping for a bit more, but technically I received what I'd been promised.

My room on the 16th floor was stylish, modern and colorful, with sleek lines and touches of whimsy. The layout was a bit odd, with the bathroom immediately to the left and a sink and mirror in a hallway that opened to the main area with a bed, desk and seating. Personally, I like a sink closer to the bathroom and farther from the bed.

The marble floor of the entryway led to crushed-velvet-style carpeting in the main area. A closet in the hall opened to a safe, mini bar and electric kettle. A larger closet in the main room provided robes, slippers, iron and board, two drawers and a good amount of room for hanging clothes.

The bed was quite comfortable, as was a small sofa with four cushions.

An exterior concrete lattice blocked any real chance for a view but did let in more light than I would have expected.

The desk featured a welcome letter from the manager and a mix of small Asian candy and cookies, along with a small machine for coffee and tea. The TV was already playing a promotional video for the hotel.

The bathroom was floor-to-ceiling marble, save for a mirror and a glass shower door. The shower was roomy, and the water temperature and pressure were excellent.

I had trouble connecting to the hotel Wi-Fi, and after I spent a few minutes on the phone, an IT guy came to the room to try the same passwords I'd been given on the phone. He said he'd go downstairs and check the systems and call me, which he did, but it took 90 minutes from my first call to get Internet. When I did, the speeds weren't great: 5.44Mbps downloading and 4.19Mbps uploading.

The light switches were oddly placed, and it was hard to figure out what switch did what (why does the switch by the bed turn on the sink's vanity mirror?). And speaking of light, the closet doors turned on the interior light automatically, which was great, except that the doors did not always fully close, spilling light into an otherwise darkened room.

The rooftop pool (and the view from it) attracted a lot of people, which made it disappointing that only 10 lounge chairs were available, all of which were filled on even a cloudy weekday afternoon.

The pool was lit beautifully at night and provided an almost mystical, glowing background to the adjoining bar.

A ground-floor restaurant, Brasserie 25, offered a full paid menu; a few floors up, guests could have breakfast and snacks at Snug.

The breakfast buffet was ample, with an omelet chef and a mix of local and Western flavors (though no pork in this majority-Muslim country).

Everything in the buffet was at least decent, and the area was well-staffed. A large refrigerator offered sandwiches, fruits, juices and yogurt, and these were available to take from 11 a.m. to 7 p.m. Access to "real food" snacks in the afternoon was a great perk that I used more than a couple times, though I would have liked more regional cuisine (I don't go to Malaysia for the egg-salad sandwiches).

A series of meeting rooms of various sizes comprised another floor with its own lounge area, and a staffer was eager to show me them all.

Service otherwise was a mixed bag. The bell staff was quick to open a door and offer a full-size umbrella. The front desk put me in a hired car (I never saw a taxi on the hotel's street), only to send me to the wrong destination. A reservations agent called me after I'd checked in, saying they'd forgotten to charge my card for the stay. More than once, I came in without being greeted or even acknowledged. While it hardly ruined my vacation, it didn't make me feel that my stay was important to them.For a large hotel (184 rooms and suites) that had barely been open for 10 weeks, some growing pains were to be expected. With all the guest rooms, meeting rooms, restaurant, fitness center, pool, rooftop bar and more, this is no small operation. But new is no excuse to not be ready for safety. The elevator was equipped with a security feature, but I was able to push my floor button without tapping the key card to the sensor. Frequently, the heavy door to my room did not fully close shut behind me.

Hotel Stripes Kuala Lumpur has the potential to be a great choice for travelers, particularly those who want a more traditional Western hotel experience with everything under one roof. But for now, it falls short of what I would expect from an Autograph Collection hotel, especially considering how much affordable luxury is available elsewhere in KL.

Until the staff gets better training and its systems get better maintenance, this is a property that has yet to earn its stripes.

Have you stayed at Hotel Stripes? Do you agree with our assessment? Tell us about your experience.