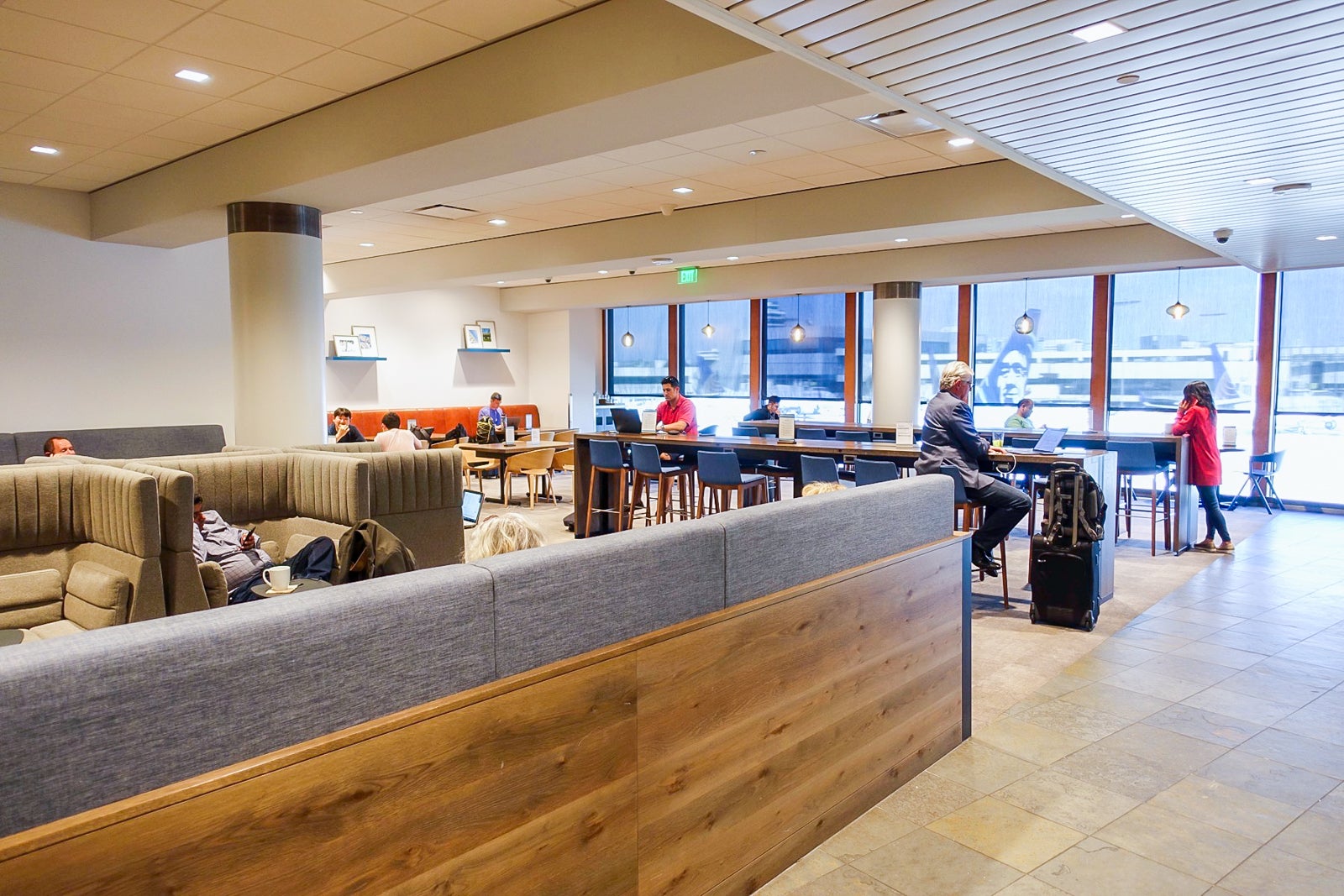 Alaska Airlines is amidst a $50 million overhaul of its lounge portfolio. It recently opened new lounges in Seattle and New York-JFK, announced plans for a lounge in San Francisco and renovated its lounges in Anchorage, Portland and Los Angeles.

Being an Alaska loyalist and from Los Angeles, I've frequently visited the old LAX lounge and can tell you that a renovation was long overdue. Here’s my take on the new lounge, which is a part of the Priority Pass network.

The Alaska Lounge lies after security in Terminal 6 at LAX. Aside from Alaska, T6 is home to Air Canada, Boutique Air, Mokulele Airlines and Viva Aerobus, but since most of LAX's terminal buildings are connected airside, you can walk or shuttle to the lounge if you're flying out of a different terminal.

If you arrive in T6, head toward Gate 64 and look for the Alaska lounge sign. You'll then need to take the elevator up to the second floor.

If you’re connecting from Tom Bradley International Terminal or terminals 4 to 8, you can walk to T6 via underground walkways. Make sure not to take a wrong turn when walking underground or you may end up at baggage claim and need to go through security all over again.

The lounge is open from 4:30 a.m. to 11 p.m. daily. You can check in with a staff member at the welcome desk or using a biometric fingerprint reader.

There are a few ways you can gain access. Entry is open to Alaska Lounge members, Admirals Club members, first-class guests (doesn't include upgrades) and anyone purchasing a day pass ($50 or $25 if you use your Alaska Airlines Visa Signature® credit card). Like the Anchorage (ANC), New York-JFK and Portland (PDX) lounges, this location is also a part of the Priority Pass lounge network, though access is limited to three hours prior to departure and may be restricted due to space constraints. A number of credit cards like the Chase Sapphire Reserve and the Platinum Card® from American Express include complimentary Priority Pass memberships when you enroll.

Unlike its predecessor, the new lounge is extremely bright and airy. There are large floor-to-ceiling windows along the length of it that allow for plenty of light and an expansive view of the tarmac.

Although no square footage was added to the lounge, there is more seating than before, so hopefully space constraints won't be as much of an issue for Priority Pass members moving forward. The main seating area consisted primarily of high-top seating and semiprivate cube pillow seats. Those who've visited the lounge before will also notice that the small business center and family room were removed to make room for more seats.

Along the walls are more comfortable couches. Although the white walls feel a bit bland, the decor and design as a whole is fresh and modern, similar to what you'd find in Alaska's new lounges in Seattle (SEA) and New York.

At the end of the lounge is a small dining area with more seats.

Although the new look is certainly welcome, the best part of the updated lounge is how many power outlets there were. There are power outlets built into most seats and beneath tables, making it easy to find a place to charge up. The Wi-Fi was pretty fast, too — I had no trouble getting work done and uploading these photos from the lounge.

The lounge doesn't offer any showers, but the bathrooms were clean and stocked with basic amenities like hand cream, cotton balls and Q-tips.

There was a relatively modest buffet consisting of snacks like hard-boiled eggs, bagels, yogurt and oatmeal in the mornings and soups, salads and cookies in the afternoon.

Like in Alaska’s other lounges, there was also a self-serve pancake machine in operation.

In addition to the Starbucks coffee machine in the buffet area, the lounge now offers complimentary, barista-made espresso beverages and loose-leaf teas for in the lounge or to go.

Made-to-order meals like omelets, paninis and rice bowls and premium alcoholic drinks were available for purchase and ranged in price from $8 to $12.

The Alaska Lounge at LAX is a decent place to hang out and get work done if you have some time to kill before your flight. Aside from showers, it checks all the boxes you want in a domestic lounge, and being able to pop in for a free, made-to-order, Starbucks drink (that you can take to go) is great. Overcrowding was a major issue at this lounge in the past, and Priority Pass members were often turned away, but hopefully that won't be the case anymore with the additional seating.

If you want a full meal and your Priority Pass membership wasn't generated through an American Express card, check out one of LAX's Priority Pass restaurants: Rock & Brews in Terminal 1, P.F. Chang’s at TBIT or Point the Way Cafe in Terminal 6 right by the Alaska Lounge.

Related: Choose this, not that: LAX Priority Pass lounge edition