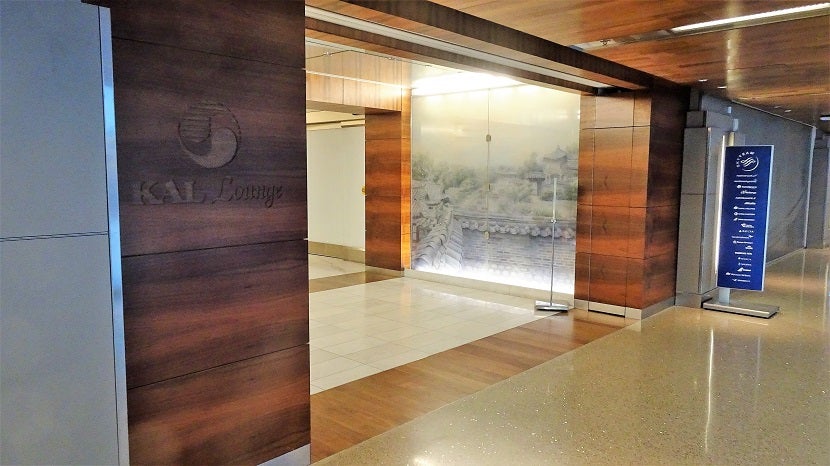 I haven't flown on Korean Air (KAL) in several years. I don't have elite status on any SkyTeam airline and I never pay for an airline lounge day pass. So how did I end up in the KAL Lounge recently while waiting for a flight from Los Angeles (LAX) to Munich (MUC) on Lufthansa? Just one more perk from my new go-to credit card, the Chase Sapphire Reserve. Like some other credit cards, including The Platinum Card from American Express, it comes with a Priority Pass membership, giving cardholders complimentary access to more than 1,000 airport lounges around the world. This was my first time using it to access a lounge at the Tom Bradley International Terminal at my home airport, LAX, and I was eager to see if it should become a regular pre-flight stop for me.

One of the first signs you'll see after clearing security directs you to turn left to get to the KAL Lounge. From there, it's just a short elevator ride and one more left turn.

On a weekday afternoon, there was no line and I was helped by the receptionist right away. Showing my Priority Pass card and my boarding pass granted me entry in just a couple of minutes.

The first thing I noticed was how good the place smelled — were they baking muffins? Next, I spotted the cool and contemporary aesthetic. It turns out there's a good reason for that: the lounge opened in 2014.

I counted at least six different types of chairs ranging from low padded lounge chairs to adjustable stools at one high bar. Much of the seating was curvy and quirky.

There were no couches and the chairs weren't quite large enough for most people to sleep in, but a few tried to anyway.

One of the most unique features of the lounge is a section outside the tall glass walls — a balcony overlooking the terminal and its fancy shops. Along the balcony, an area was segregated by a short glass wall. I learned that this empty section was part of the First Class lounge, accessed from a separate entrance for those who were authorized to enter. I have it on good authority that the First Class section can also be entered from another door near the showers, but proceed at your own risk!

Next to the balcony was a bar area, with cocktail table seating and some cushier chairs along the glass wall.

Off the main seating area was a baggage room with lockers, a hallway with bathrooms and showers and a room where food is served. While announcements were made for departing SkyTeam flights, a monitor on the wall listed the departures for all airlines in the terminal.

Two showers are available for use upon checking with reception. Note that only one of them is wheelchair-accessible.

Both showers were empty while I was there and each seemed spotlessly clean and rather lovely, complete with marble walls and nice lighting.

Back in the lounge, four televisions were on various channels, all happily muted. Orchestral music played throughout the lounge. A selection of English and Korean language periodicals were available on wall racks.

Wi-Fi in the lounge is free and required no password, but seemed slow and testing confirmed it: 1.53 Mbps download and 6.70 Mbps upload. I like to load up on podcasts before a long flight and after several interrupted downloads, I ended up switching over to my mobile phone data to finish. If you're planning on downloading a lot of files before you fly, this may not be the lounge for you.

Power outlets and dual USB plugs are scattered throughout the lounge, often integrated into the furniture. On the balcony, a few plugs can be found underneath hatches on the floor, but just be aware that they don't all work!

All the food and drinks are complimentary and self-serve, with most of them located in a single, narrow room.

Along one wall of the room was a refrigerator with beer and soft drinks and a buffet with fruit and vegetables, salad and muffins — is that where that great smell was coming from? Mystery solved.

The fruits and vegetables were perfectly ripe, cold and fresh with a huge bowl of pasta salad on a chilled pad next to them.

The finger sandwiches were flimsy and tiny, often with just two slivers of lunch meat.

Along the other wall, you could choose from cereal, a coffee/espresso machine, juices, teas and ramen. In the farthest section, chips and salsa, pretzels and bread were also available. Unfortunately, unless you wanted to add hot water to a cup of noodles, there was no hot food available, which was a big disappointment. This is truly a lounge for snacks, not meals.

Things were happier over at the bar, which included five mid-shelf liquors and various mixers, plus three wines — a California red and white, and a Bordeaux.

There's a lot to like about the KAL lounge and plenty of room for improvement. The service is excellent — within the first 10 minutes, I saw seven staffers roaming, cleaning and attending to guests. Less than 10 minutes after I set down my first plate of snacks, someone came by to clear it. Aside from one coffee maker and one electrical outlet, everything functioned brilliantly and was kept nice and clean.

It's fun to use a lounge that is so new and stylish, plus the balcony adds a nice sense of perspective to a long day of travel. But how modern can you call a lounge that offers such slow Wi-Fi? And though the lounge is spacious, the distance between chairs isn't, and the food serving room is quite narrow. Fortunately for me, the next KAL flight wasn't scheduled for another eight hours, but it isn't hard to imagine how chaotic this place would be when it's full.

The food and drinks that were available were all very good, plentiful and mostly fresh, but I'd rather have a few hearty things than several snacks — especially when none of them are hot. This KAL Lounge functions as its business-class lounge and if I had paid for a business-class ticket, I'd be very disappointed in the food selection. As a free perk though, the place is swell, and I'll be back — just not when I'm hungry.

Have you been to the KAL Lounge at LAX? Tell us about your experience, below.

Related stories
Chasing elite status on Alaska Airlines? A flight to California this fall could help
Flights to Auckland starting under $700 round-trip
The ultimate guide to earning elite status with United cards
American Airlines forgot it had landing slots at JFK. Then it lost some of them
Featured image by The KAL Lounge at LAX.