What it’s like to fly with Denver Air Connection 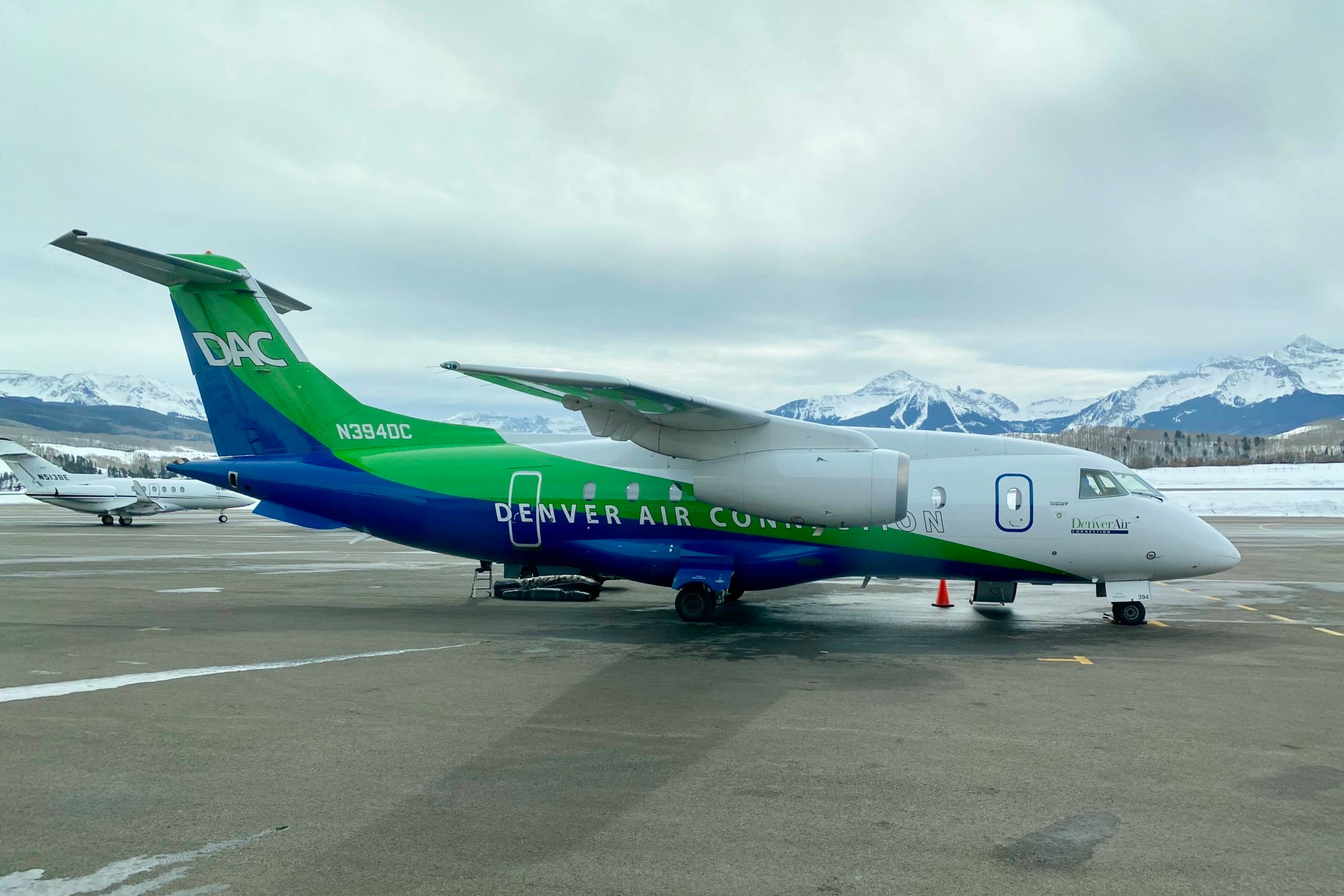 It’s not often that I stumble upon an airline I’ve never heard about. But that’s exactly what happened when I searched for flights from Denver to Telluride.

When flying to Telluride, most people fly to Montrose (MTJ), which has a relatively large airport with non-stop service to a bunch of cities around the West Coast. But Montrose is about a 90-minute drive from Telluride. So, when I found this non-stop flight operated by Denver Air Connection to Telluride’s regional airport, I knew I needed to try it. Turns out that Denver Air Connection operates a few regional flights from the Denver International Airport. And thanks to its interline agreement with United, you may just end up booked on one of its Fairchild - Dornier 328JET airplanes.

The plane itself is worth the journey, if you're an aviation enthusiast. A derivative of the Dornier 328 turboprop, the 328JET is a German - American hybrid that was produced in small numbers until 2002. With a stellar safety record but scant commercial success, it's a very rare find, and an AvGeek delight.

So, read on to find out what it was like flying it with Denver Air Connection.

Getting a ticket to fly with Denver Air Connection is as simple as you’d expect from any major airline. You’ll find the airline’s flight schedule on Google Flights or your preferred online travel agency.

In my case, I knew I needed to be in Telluride, but had no idea about this non-stop service. A quick search on Google Flights was all I needed to pique my curiosity.

I went directly to the airline’s website to purchase my ticket, which coded as travel on my Chase Sapphire Reserve, earning 3x points.

Due to interline agreement with United, many passengers won’t be booking direct with Denver Air Connection. Instead, they’ll find themselves booked on this flight after purchasing a connecting itinerary with United. And thanks to United’s massive hub operation in Denver, Telluride is now just a one-stop flight from most major U.S. airports.

Unfortunately for those booking through United, you can’t earn miles or elite-qualifying credit for the Denver Air Connection segment.

When booking, there was no option to select a seat or purchase checked bags. It took a bit of digging to find, but — like Southwest — Denver Air Connection offers open seating.

With regards to checked bags, if your first flight is with United, your bags will be through-checked to Telluride. If not, you’ll need to bring them to the airport check-in counter and pay $25 for the first bag, $35 for the second and $100 for any additional bags.

Fares for the Denver to Telluride route start at around $179.

My time with Denver Air Connection began on the National Rental Car shuttle bus to the airport terminal.

When I told the driver my airline, he exclaimed that in his three-year tenure, he’d never once driven a passenger flying Denver Air Connection.

Fortunately, there was plenty of signage at the terminal to direct me to the airline’s check-in counters.

It took me a while, but I found the counter on the terminal’s West side sandwiched between JetBlue and Lufthansa.

Stopping at the check-in counter is a requirement for all passengers since the airline doesn’t offer online check-in. Fortunately, the process was seamless and took just two minutes.

After confirming how many bags I was carrying, my boarding pass, marked with TSA PreCheck, was issued.

Next stop was security, which always takes forever at Denver International Airport.

The Presidents’ Day holiday meant that all lanes were jammed, except for Clear.

This picture is just another reason to have both Clear and TSA PreCheck.

I was through within minutes, and then took the train to the A gates. As you’d expect, there was no lounge for Denver Air Connection, so I went straight to gate A64. It took a while to walk to one of the farthest gates at the airport. Boarding began just 20 minutes before departure. There was no jetbridge. Instead, it was just a short walk to the 19-year-old Dornier 328 Jet. With only 30 seats on the plane, there was no risk of overcrowding at the gate.

I left my large rollaboard by the entrance to the plane and made my way aboard.

Within minutes, everyone was seated and we were on our way to the highest commercial airport in the U.S.

For a small regional jet, I found the cabin quite comfortable.

Seating is arranged in a 1-2 configuration, with single seats on the port side and the couple seats on the starboard side. The leather seats are a noticeable upgrade from the slimline ones you’ll find on many other regional jets.

The 32 seats are spread across 11 rows, though the last row only has a single seat next to the galley and lavatory.

The seats themselves measure an above-average 19 inches wide and offer 1.5 inches of recline.

Each one also has moveable armrests, making for easy egress during the flight.

Thanks to the open seating policy, I had no trouble snagging the best seat on the plane — the solo seat in the exit row.

All other seats had about 32 inches of pitch, but Seat 9A had an additional 10 inches. I’d do everything in my power to get on board early to grab this seat. Unfortunately, there were no exit rows on the starboard side of the plane, so if you’re traveling as a couple, you’ll have to manage with the standard pitch.

Tray tables measure 15.5 inches wide by nine inches long. My seat's table was in the armrest. On a short 58-minute flight, I didn't really need to use it.

The small overhead compartments are big enough for a backpack or purse. If you’re bringing something slightly larger, there is plenty of under-seat storage too.

The passenger-service overhead panel has a light, call button and an air nozzle, which helped keep me cool throughout the flight.

There is a small lavatory at the back of the plane. It doesn't have running water, but is noticeably larger than the bathroom on a similarly-sized jets like the Seaborne Airlines Saab 340B turboprop.

Perhaps the most interesting thing in the cabin was the glass peephole into the flight deck. Though I wasn’t allowed to photograph it from up close, I enjoyed observing the pilots make adjustments to the overhead instrument panel during the flight.

And the AvGeek in me couldn’t help but grab a cockpit photo after the flight.

Overall, I really liked this cool little plane. It basically felt like the Audi A4 of regional jets.

I wasn’t expecting much in the way of amenities for such a short flight. And so I wasn’t surprised when the only amenity onboard was a magazine about Telluride.

Though there wasn’t any IFE, I kept my eyes peeled to the oversized 17-inches long by 11-inch wide windows throughout the flight. The views were incredible as we cruised above the Colorado Rockies.

Denver Air Connection offered the best snack selection I’ve ever seen from an airline. Period. It was so good that I wrote a separate post about it.

There wasn’t a menu, so I wasn’t sure what to expect. Once we were airborne, however, the sole flight attendant sprang into action and hustled her way through the service. She first passed through the cabin collecting drink orders. You could select from a variety of soft drinks, tea and coffee, but I ordered a bottle of water.

Once she completed the drink service, she passed through the cabin with a massive snack basket. The assortment was amazing and featured full-sized packages of brand-name snacks.

She encouraged passengers to take as much as they wanted, so I raided the minibar.

The flight was too short to finish everything I took, so I saved the leftovers for the next time I fly United and get served a tiny bag of pretzels.

I wouldn’t hesitate to fly with Denver Air Connection again. The booking process was seamless and the ground experience was quite pleasant.

Once onboard, the Dornier 328 offered one of the best regional jet experiences I’ve had to date. The 1-2 seating was spacious and the seats were comfortable. The lavatory was much larger than expected, and the oversized windows provided all the inflight entertainment I needed. And thanks to the amazing snack basket, I had plenty of nosh for the hour-long flight.

Before long, we landed just minutes from the slopes at the highest airport in the United States. If you’re looking to fly commercial to Telluride, Denver Air Connection is the way to go.

This story has been edited to indicate that the tray table was in the armrest, and that the airplane has 30, not 32, seats.