Birth of a Brand: The Avid Hotel by IHG in Oklahoma City 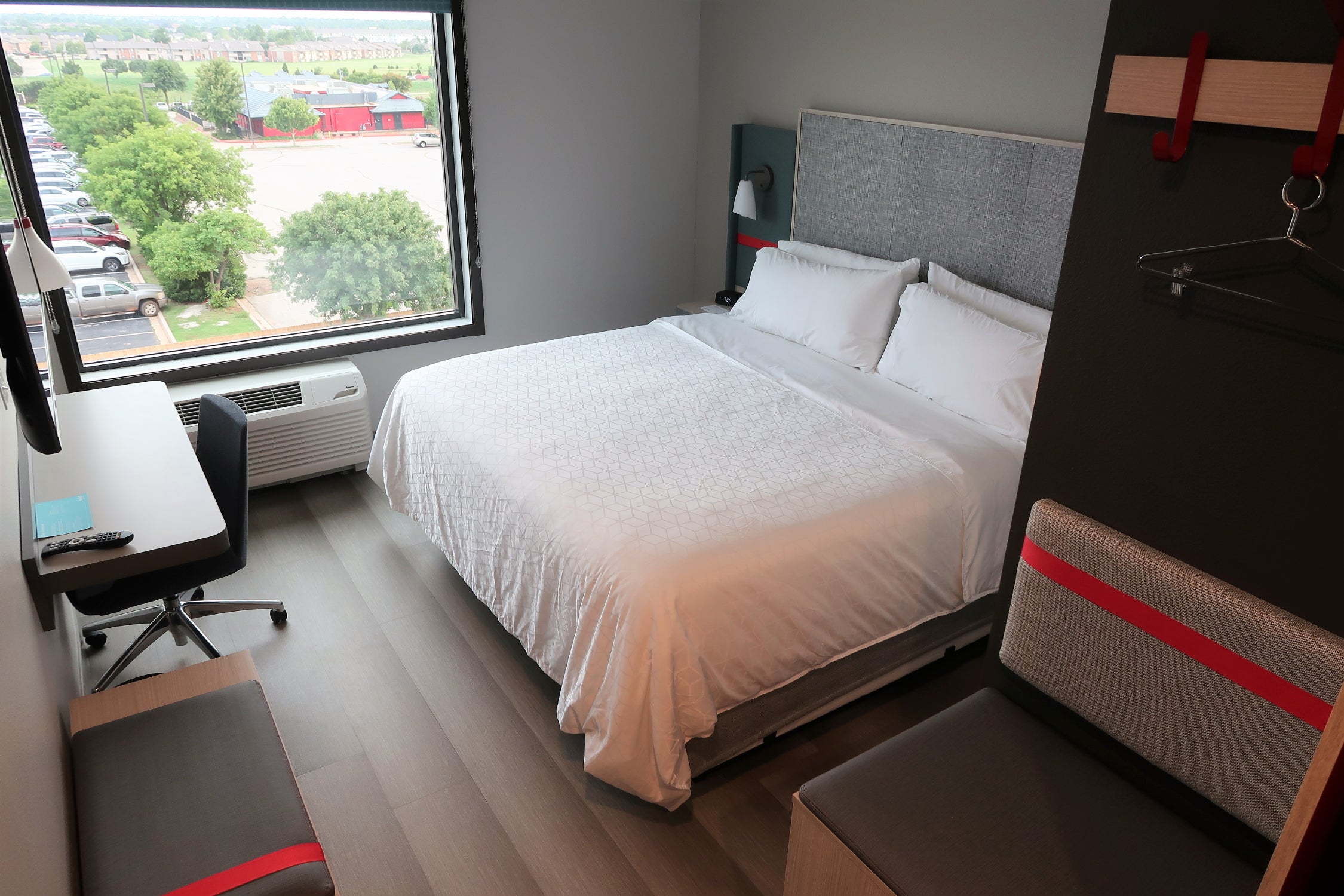 IHG is my primary go-to hotel brand. In the last year, I've spent 103 nights in IHG properties all around the world — including stays I've reviewed for TPG at Kimpton in New York City, Hotel Indigo in Berlin and Hotel Indigo in Austin, Texas. So when I noticed IHG's new Avid brand would be opening its first location outside Oklahoma City, Oklahoma, I booked a two-night stay just days after its grand opening.

Here's my take on IHG's newest brand and hotel.

Avid bills itself as a new kind of hotel where "the essentials are done right." According to the online marketing materials, Avid hotels aim to provide: sound sleep through premium pillow-top mattresses and blackout roller shades; high-quality grab-and-go breakfast; a room that is clean and "just right"; and friendly service.

IHG says Avid properties will generally run $10 to $15 less than Holiday Inn Express properties. Although there's only one Avid hotel open currently, other locations are planned throughout the US, Canada and Mexico. IHG reported in June 2018 that 126 Avid properties were in the pipeline, so you'll likely see one popping up near you soon.

Although I would have earned 10x IHG points if I'd booked either of these cash rates with my IHG Rewards Premier Credit Card, I opted to use 30,000 IHG points for this stay, since I wasn't working toward an Accelerate promotion.

Avid's first property is situated in the northern suburbs of Oklahoma City, Oklahoma, next to Quail Springs Mall. Although we found there were many restaurants and shops within walking distance, it was best suited to those traveling with a vehicle.

When we pulled up at 7:00pm on a Friday, I counted 10 cars in the parking lot. We were greeted both by a woman at the front desk and by a sign that read, "Welcome IHG Rewards Club members. You've arrived at the first Avid hotel on Earth."

I'd booked our two-night stay using points, so I simply needed to provide my ID, confirm my information and agree to the hotel's policies regarding pets and smoking (neither of which was allowed).

While we were looking around the lobby on the way to the elevator, the front-desk agent came over to apologize for not providing my IHG Platinum member welcome gift. He asked if I wanted 500 welcome points, which TPG's latest valuation valued at $3, or a welcome gift. When he said the welcome gift was a reusable Avid coffee cup, I opted for the commemorative souvenir.

Our original room had an uncomfortably loud air-conditioning system. After trying different settings for a few hours, I called the front desk and mentioned it. The agent immediately offered to move us to a new room. After a few update calls, she delivered keys to Room 413, just down the hallway.

There were two room types: one king bed or two queens. We opted for the king room. While talking with a manager at breakfast, we learned that all of the rooms featured mattresses that were ranked as the best for hotels by JD Power. The mattress was indeed very comfortable, and we slept well both nights.

The king bed (80 inches long by 76 inches wide) took up much of the room, but there were bedside ledges on either side of the bed.

The ledge on each side of the bed had a power and two USB outlets, and the open design allowed for luggage storage under the ledge. There was an individually controlled light above each ledge.

There was an air-conditioning and heating unit underneath the window. Unfortunately, the work desk was located right next to this unit, and there was nothing to deflect the hot or cold air blasting from it, so I never wanted to sit at the desk. Installing an air deflector would've gone a long way toward fixing that problem.

A 55-inch TV was directly in front of the bed, hanging above part of the desk.

I liked that the TV supported casting from personal laptops, cell phones and tablets, but there were bugs. For example, although we needed to use our room number and name to access the Wi-Fi, it was possible to cast to other rooms. If fact, sometimes only other rooms were listed as casting options.

Next to the desk and below the TV was a padded bench for luggage or sitting. Above the bench were two hooks. A third hook was next to a full-length mirror and then another hook was on the other side of the mirror toward the entrance.

Across from the mirror was an open closet. The nook had four hooks, four hangers, two shelves, a mini-fridge, a steam iron and an ironing board. Instead of using this area as a closet, I sat in this padded nook while writing this review, since sitting at the desk was uncomfortable.

The bathroom was to the right by the door. There was a sink with two plastic cups and a box of tissues, as well as a toilet on one side of the door. Next to the sink were large bottles of J.R. Watkins hand soap and moisturizing lotion.

Under the sink, open shelves held towels and an efficient hair dryer. The towels were surprisingly soft and absorbent, although they didn't dry quickly after use.

Across from the sink and toilet was a walk-in shower, which had good water pressure and a ledge for your foot while shaving.

Large bottles of shampoo, conditioner and body wash were mounted in the shower. Although many people dislike these large bottles, I appreciated the more ecofriendly approach. The aloe-and-green-tea-scented amenities smelled great.

The entire room had hard flooring, more durable and easier to clean than carpet. There were 10 power and four USB outlets throughout the room in convenient places, so charging was easy.

In general, we liked the room. The blackout curtain kept the room very dark, and the transparent curtain provided the right level of daylight while maintaining privacy. However, our room became increasingly humid throughout our stay, and the desk was uncomfortable because of the A/C. And don't expect a room with a view, as all rooms at this property looked out over parking lots.

Instead of kettles or coffeemakers in each room, the hotel provided complimentary coffee, hot water, still water and sparkling water in the lobby 24 hours a day.

Breakfast was available in the lobby each morning from 7:00am to 10:00am, although the buffet wasn't packed either morning of our stay until around 10:15am. In addition to the coffee and water that were always available, apple juice, orange juice, lemonade, flavored water, almond milk, skim milk and 2% milk were also out during breakfast.

Certain breakfast items were displayed on a large circular table.

You could eat in the lobby or take your breakfast to go.

Near the front desk was a small vending area for snacks. Although not cheap, the prices weren't prohibitive, and there was a good variety.

The lobby had a variety of sitting areas, ranging from large tables to couches. Most of the tables made charging easy with power ports and wireless charging. However, the lobby contained no sound-absorbing materials — which was obvious to us because several kids soccer teams stayed at the hotel during our weekend stay.

Free Wi-Fi was available to all guests. While the Wi-Fi didn't test well, we never found it to be too slow to work or watch videos that we streamed to our devices and cast to the TV.

In the lobby was a computer with a printer in a nook by the hotel's main entrance.

An outdoor pool was open from 9:00am to 9:00pm. There were lounge chairs and tables surrounding the pool.

A 24-hour workout room was on the ground floor near the elevators. All of the equipment looked brand-new. There was an elliptical, two treadmills, an exercise bike, an exercise bench and a large workout center complete with pictures of exercises. There were also various exercise balls, kettle weights, dumbbells, yoga mats and towels.

Avid is IHG's new attempt at a functional, budget brand. A manager at this Avid property described it as a Holiday Inn Express without hot breakfast but with higher-quality mattresses. Although I generally agree with this description, Avid rooms are also more basic and practical than most Holiday Inn Express rooms — but not necessarily in a bad way.

Although this particular property has some kinks to work out — namely the humid room, air-conditioning placement and loud lobby — I'd stay at the brand again. It satisfied my main requirements of functional design, usable Wi-Fi, friendly staff and affordability. That said, there's nothing luxurious about a stay at Avid — except perhaps the comfortable mattress — so it's best for stays where all you want is a clean and comfortable place to lie your head at night.

Featured image by If you're looking for a relatively inexpensive stay, IHG's new avid brand may be a good option. (Photo by Katie Genter/The Points Guy)
Editorial disclaimer: Opinions expressed here are the author’s alone, not those of any bank, credit card issuer, airline or hotel chain, and have not been reviewed, approved or otherwise endorsed by any of these entities.

Our points-obsessed staff uses a plethora of credit cards on a daily basis. If anyone on our team wouldn’t recommend it to a friend or a family member, we wouldn’t recommend it on The Points Guy either. Our opinions are our own, and have not been reviewed, approved, or endorsed by our advertising partners.
See all best card offers
Related stories
News
Cancun Travel Advisory: State Department Issues Warning to US Travelers Heading to Mexico
Guide
Yosemite's 'firefall' is back this year, here's when and how to see it
Deals
Round-trip fares to French Polynesia starting at $600 through February
Guide
The best credit cards for pet expenses